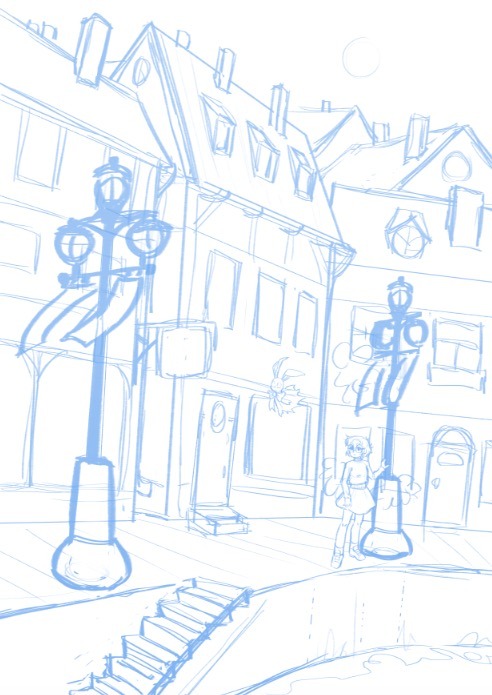 Before you start any illustration, it’s a good idea to have your references ready! References usually fall into 2 categories: aesthetic inspiration (like a mood board) or drawing references (like a pose reference, a character sheet, etc). I like to have both on hand.

For both kind of reference pictures, I recommend using pinterest as a way of keeping them organized. It’s free, and there is no limit to the amount of boards/pins you can have! If you can’t have/don’t want a pinterest account, you could also save the inspiring pictures to your desktop/a cloud storage site, or even print them out (lol!). As long as you have easy access to your references, that’s all that matters.

When I’m working digitally, I usually just copy+paste (ctrl+c and ctrl+v) the images directly into the clip studio paint file and then merge them into the same layer that I can make invisible/visible as needed.

I put a mosaic over these images because they aren’t mine, but I wanted to give you a sense of what I was looking for when I pulled references for this piece.

I knew I wanted to draw a scene of my OC Devika walking through a charming rustic town with the river right by the buildings like in Venice or some river town in Europe. So I pulled references that made me feel like I was exploring someplace with lots of history—the buildings look old, the streets are narrow, crooked, or somewhat winding, and everything has undeniable charm. I also picked photos with different vantage points to give myself some ideas for composing my drawing.

It’s important to understand HOW to use references! Plagiarism is a huge deal (and a huge problem in the art community), so you need to know the right ways to use something as reference.

Tracing is a contentious topic. Some people will tell you to never trace at all (and I used to be one of them). But I’ve learned that tracing is okay if you follow a few rules:

1. NEVER post something you traced from someone else’s work and claim it to be your own art. That is stealing!!! (Even if only part of the drawing is traced!)

3. Make sure to train your artistic eye too! Tracing is certainly faster and can help build muscle memory, but learning how to observe the world and then translate that into good looking drawings is a vital skill for all artists. As you get better at drawing, your need to trace will decrease dramatically.

But what if you’re not tracing? That’s where the rules get a little blurry.

You can avoid plagiarism by changing the original piece enough to make it unique—in other words, take Aspects from the reference images. Maybe you really like how an artist uses textures, or how a photograph looks light and airy. Maybe you want to emulate a particular architectural style, or an outfit that a model is wearing.

To avoid plagiarism, you would have to emulate the parts you like the most, while discarding & changing the rest. In the context of my illustration, I’ll give you an example:

So those are the details I decide to use in my own illustration! I make sure to only take what I need and not to pull too heavily from one source.

When creating an illustration, it can be tempting to immediately jump into the sketch—and sometimes that’s fine! For smaller/simpler illustrations where there aren’t a lot of details, you can probably get away with skipping thumbnails.

But thumbnails are essential for creating complicated or detailed illustrations! They are a way to revv your creative engines and brainstorm ideas before you commit too much time to an idea you don’t like later. 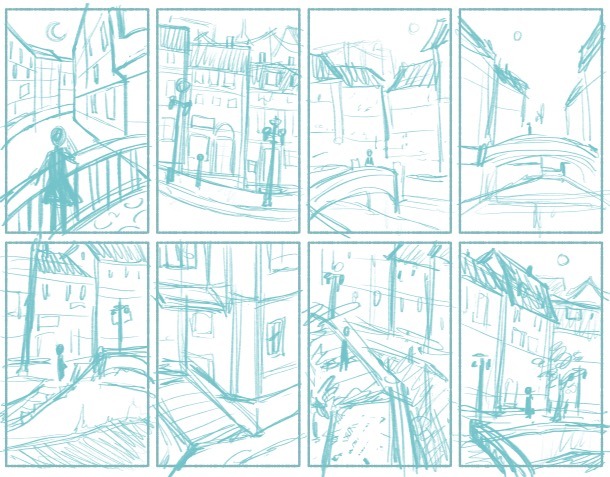 I usually try to draw my thumbnails on paper, but for the ease of this tutorial I’ve created them digitally.

Some tips for thumbnails:

- Thumbnails should be the same format as your finished drawing— I want to make the final illustration a 21cm x 30 cm canvas size, so I made sure my thumbnails were at the same ratio (just much smaller).

- Try not to spend too long on any one thumbnail! The goal is to get a rough idea of a composition and to get all the bad ideas out of your system. It can be helpful to give yourself a timer--maybe 5-10 minutes per thumbnail. (If I’m feeling stuck, I sometimes like to play music and try to finish a thumbnail before the song ends.)

-Don’t put too much detail into it! Focus on the major compostion details, like the focal point, the horizon line, and anything that will take up a lot of space in the composition.

-Thumbnails almost never turn out perfectly. Drawing them so small and loose is great when you’re trying to brainstorm a good idea, but when you then try to make a sketch for the full size canvas things can turn out a little wonky. Don’t worry! Just focus on getting to that good central idea for now.

-If you’re drawing the thumbnails digitally, resist the urge to delete them after something doesn’t go right. Also resist the urge to move things around and fiddle with the details until you get it “just right”. FIddling is something to leave for later— a thumbnail just has to be able to convey a rough idea of what you want from an illustration!