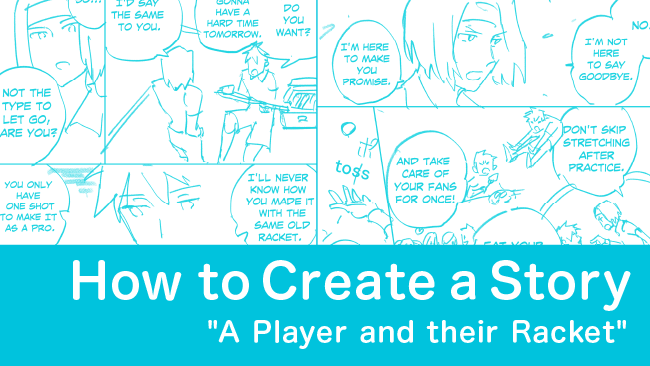 In this series, we will explain the process of creating the theme storyboards for the Storyboard Category of Clip Studio Paint’s International Comic/Manga School Contest 2020.

This article is also available in video format (Japanese).

The storyboard for the contest is eight pages long. Applicants must create a shonen or shoujo manga with the theme “Promise,” based on one of the two storyboards.

This article explains how the plot of the shonen manga was written. 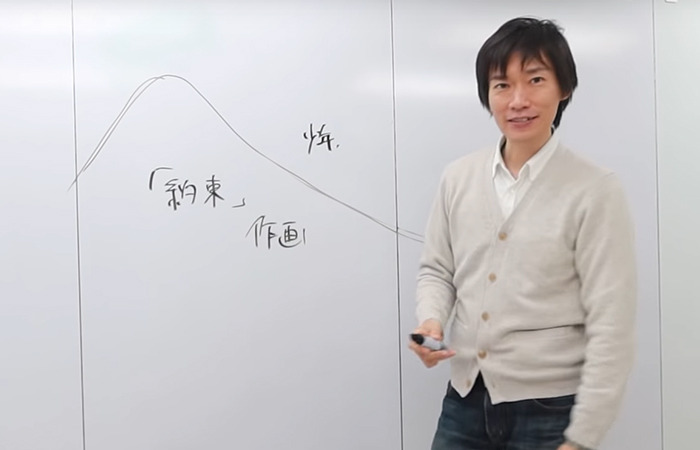 ・ Must be submitted under the Storyboard Category

・ Applicants can submit from all over the world

・ The theme is “promise”

Based on these three points, the work needs the following three elements.

・ Scenes that create a visual narrative

・ Universal subjects that anyone can sympathize with as much as possible

Thinking about the theme

What is a “promise”?

If you decide what "promise" means and what part of a promise you want to draw, this will help outline the theme of the storyboard. You will want to guide your readers to a climax that makes them think, "What a great promise."

When promises evoke the most emotion:

・ Swearing to a promise 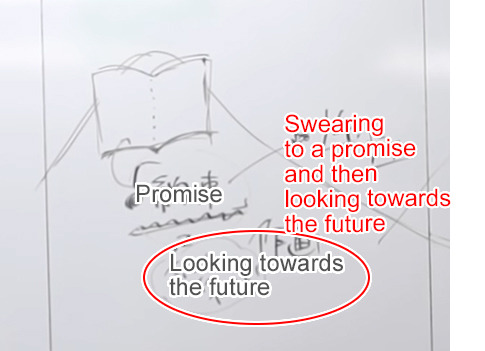 What kind of protagonist makes a promise?

A protagonist of a shonen manga evokes sympathy as they progress closer to fulfilling their dreams. So the climax is when they swear to a promise. Up until they swear to a promise, the protagonist should be in a state of uncertainty. After, they will then begin looking towards the future. This image of the protagonist, steeled in resolve, looking towards the future becomes a form of catharsis for the reader. 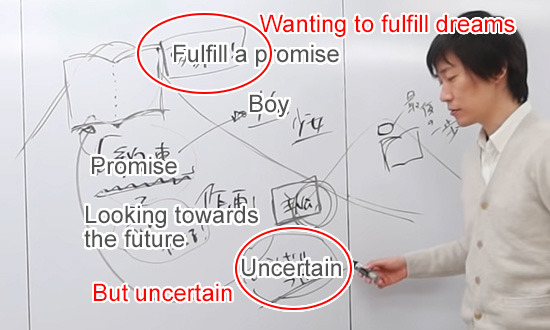 Knowing our overall plot points, let's think about what kind of work would easily meet them.

In a manga or comic, it’s important to have visual interest, whereas scenes that are conversation-only with no movement can end up a little dull. For this storyboard, we decided to go with a sports manga.

Sports is an easy subject for readers from anywhere to sympathize with, and soccer is a good example of a worldwide popular sport, and it lends itself well to climactic shooting scenes. 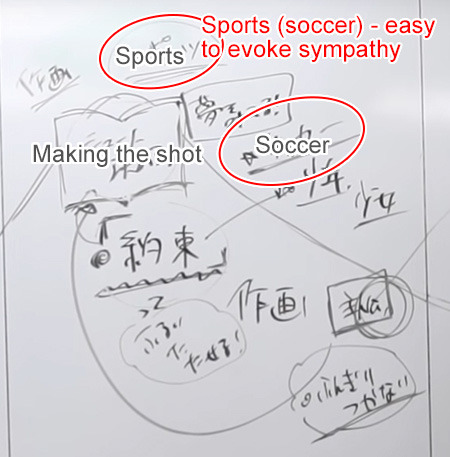 Choosing who to promise to

Now let's think about who the protagonist made a promise about soccer with.

Think of a boy playing soccer and what is closest to him; the first thing that comes to mind is the ball. So let's try to imagine a story in which the boy makes a promise with his beloved, treasured ball. What happens? Since the ball cannot talk, it becomes a one-sided promise, which is difficult to make entertaining.

The other party being promised to should be a human being.

Going back to those closest to the boy playing soccer, he could have friends or a coach who frequently plays together with him.

However, making a promise with the people directly around him feels too ordinary, and is again, difficult to make entertaining.

So, let's try and anthropomorphize the ball. Let's make the protagonist's friend appear as the incarnation of the ball. Now we can establish a conversation with an opponent, the anthropomorphized ball, which adds the element of surprise. 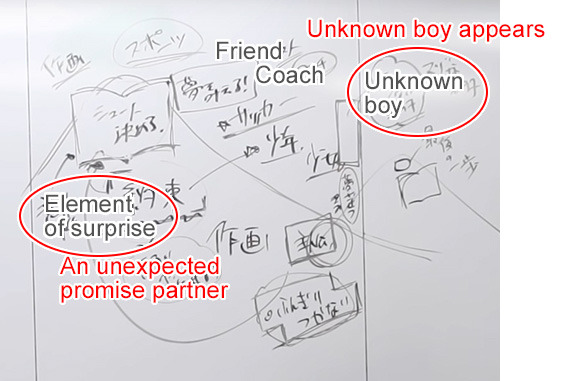 Having decided on a story in which a favorite tool/item is anthropomorphized, let's reconsider the sport.

In soccer, a ball doesn't feel much like a protagonist's partner in a match. A sport that does have that bond between a protagonist and their tools is tennis. Tennis players can play with their favorite racket regardless of the match, which allows you to go into the bittersweet feelings that the two have shared to create drama.

The telling scene will be the final tennis serve. 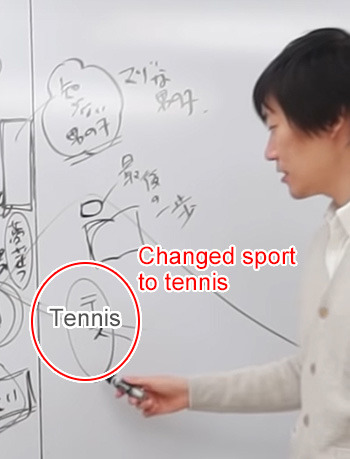 Making readers think about the promise

To determine the content of the promise, consider the relationship between the protagonist and their favorite racket. To be attached to the racket means that the protagonist must have used it for a long time. They know each other well and have built up a strong relationship as partners. But, even things have a lifespan. The protagonist is disappointed that he has to eventually give up his racket.

It's at this moment that the tennis racket appears before him in the form of a human. The incarnation appears to encourage the depressed protagonist. It urges, "It's good to keep using tools over and over until they break." "Tools are tools; you are you." The racket is a tool itself and wants the protagonist to sacrifice his pride and continue to move forward.

From the relationship between the two, it is clear that what the protagonist needs to move forward is to resolve his friendship and achieve his purpose. So they are likely to make a promise that, even if the protagonist throws away the racket, he will continue to succeed in tennis. 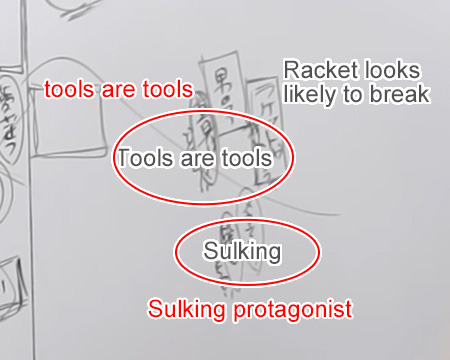 With all the details, we have put together the following plot.

The main character is a boy who is a tennis player.

He has been working hard with his favorite racket, but it is nearing the end of its life, and the boy is now unable to practice.

Another boy appears and pushes him to practice even if it’s without using his favorite racket.

While practicing, the protagonist realizes that the boy is actually an incarnation of his favorite racket.

The protagonist, who promised the racket that he would always succeed in tennis, says his goodbyes and gives the racket a send-off in the form of one final full-forced serve.

His favorite racket breaks. The story ends with the hero renewing his thoughts on tennis.

In this plot, the timing at which the reader figures out that the boy that appears in front of the protagonist is, in fact, the incarnation of the racket is critical. Since the storyboard is only eight pages long, revealing this near the highlight of the entire manga creates a simple, yet reliable hook for the reader. 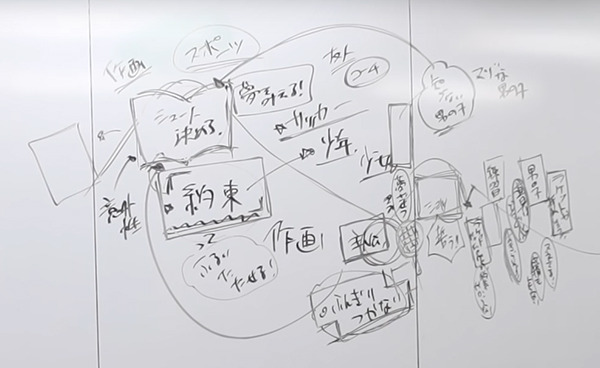 When creating a storyboard, consider how much of the plot you can express visually in graphics.

How to Create a Story #1 by ClipStudioOfficial