In this series, we explain the process of creating the theme storyboards for the Storyboard Category of Clip Studio Paint’s International Comic/Manga School Contest 2020.

Click here for the previous article where we explained how we made the plot. It has a video covering the process as well.

Like with the Shonen manga version, we'll cover how to make a storyboard after the general flow of the whole story is decided.

I'll also show where I had difficulty in making my storyboard, and the methods I used to overcome it.

You can read the Shonen manga version here.

Here's the storyboard I made for this manga! 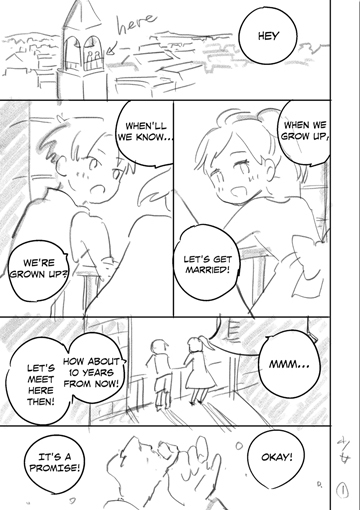 The lack of expressions on the final page is to give those that want to draw a version of this comic something to think about. Try to imagine what kind of expression your characters will have.

Here is the overall distribution for the rough storyboard. Later, I'll go each page at a time, comparing it to the clean storyboard. 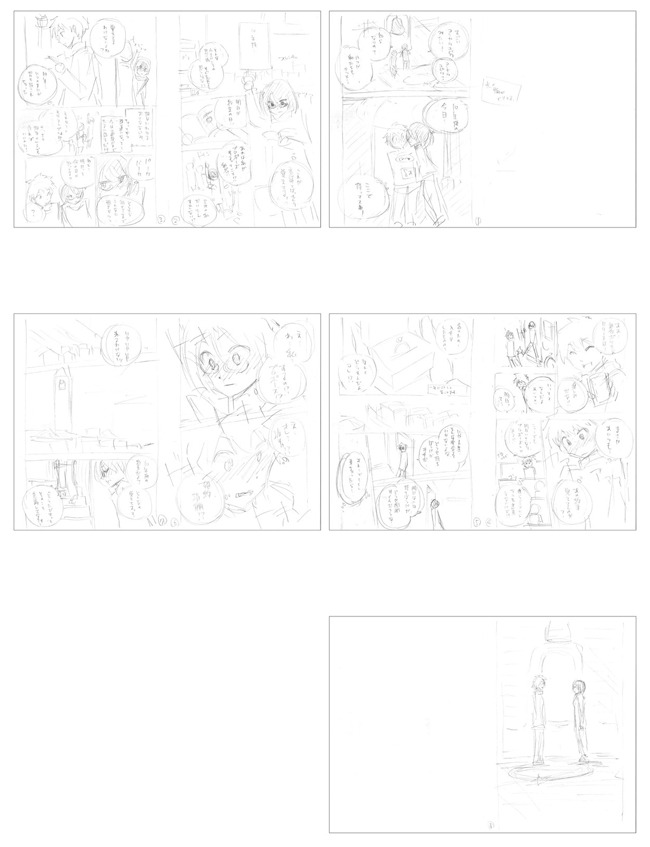 This is the heart-pounding story of how two adults resolve a marriage proposal they made to each other as children. The first thing that matters is what specific promise they made and how they will end up. In order to get a concrete picture of the climax, the key is what kind of promise is made at the beginning. For this reason, I thought about the story from the beginning.

For a concrete climax, think from the beginning

I had decided during the plot stage that I would include the childhood promise on page 1, but I hadn't decided exactly what that promise was going to encompass. Therefore, I considered the following three patterns.

"In ten years, on this day, let's get married."

In the case of this promise, even if you draw the decade-later reunion in the middle of the 8 pages, getting to the wedding day to fulfill the promise will be difficult.

"In ten years, on this day, I'll be proposing to you."

In the case of this promise, a proposal is still just a promise to marry, which can't be fulfilled until they marry. This puts us right back into pattern A.

"In ten years, on this day, I'll be here waiting for you."

In the case, it could be perceived as one protagonist telling the other to come and propose. Being a female protagonist and actively waiting for a proposal isn’t received well in a story.

In the rough storyboard stage, I decided to use Pattern C as the base, and to make the female protagonist the one to takes it on themselves to propose making the story a bit more complex. In the clean storyboard where the story became a mix of patterns A & B where the children were too young to really understand just what a marriage proposal was, but they made some kind of promise for the time being.

I decided to go with pattern C and draw the climax with this kind of feeling in mind: "Will the other person show up or not? Probably not but... what if they do? They did!” However, I am now torn over whether the protagonist should propose or be proposed to."Will they show up? Probably not but... what if they do? They did!” It's a cathartic feeling to finally know whether or not you've actually been in love with each other for a long time. What's important with this is not who proposes to who, its the emotion of whether or not both parties remember their promise. Decisions, decisions!

I hesitated a lot, but in the end, drawing what you enjoy is very important for an artist, so I went with what I preferred to draw and decided that the female protagonist will be the one to propose. With this, we finally decided on our climax and the 6th page. 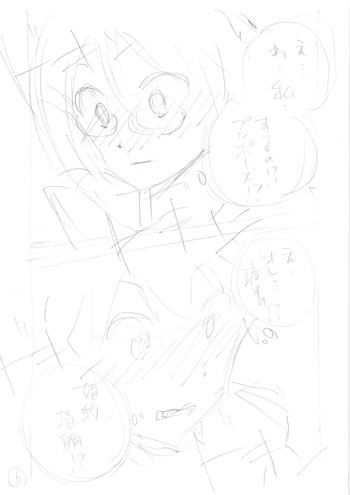 "They won't come but...if they do, I'll propose...." is a feeling that will catch you off guard if you're not ready for it.

We'll work our way up from the beginning, leading to the climactic 6th page.

Page 2: The situation a decade later. Remembering the promise well.

Page 4: Checking out if the other character remembers the promise.

I drew the protagonist and the reader a little more subjectively in the Shonen manga version, and in the Shojo manga version, I tried to draw them and their feelings more objectively. You can manipulate the way a panel reads by arranging the pictures in the panel layout.

In the clean storyboard, I focused on conveying the development of the female protagonist proposing so that the situation to the reader is natural and non-misleading, and had the rest of the story tweaked to follow suit.

Page 1 shows the past promise. On the left is the clean storyboard, and on the right is the rough. The rough storyboard hinted at the proposal, but I wanted to make sure only the date was fixed, so the content felt more soft and fluffy. The revised clean storyboard confirms two things: the marriage promise and the date of the promise. 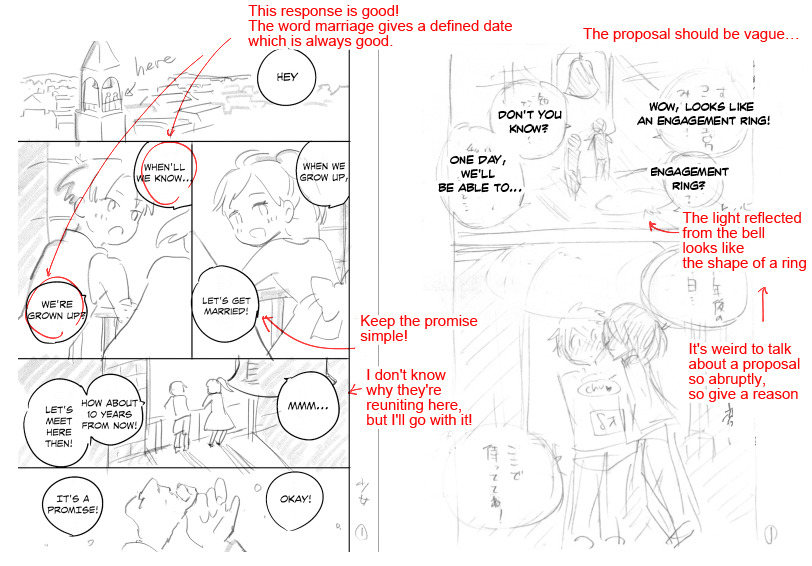 In the rough storyboard, I drew what I thought was going to be the proposal on the second page. But "does that mean I'm going to propose to them?" is too much to explain with just one line so it was moved to a later page in the clean storyboard. 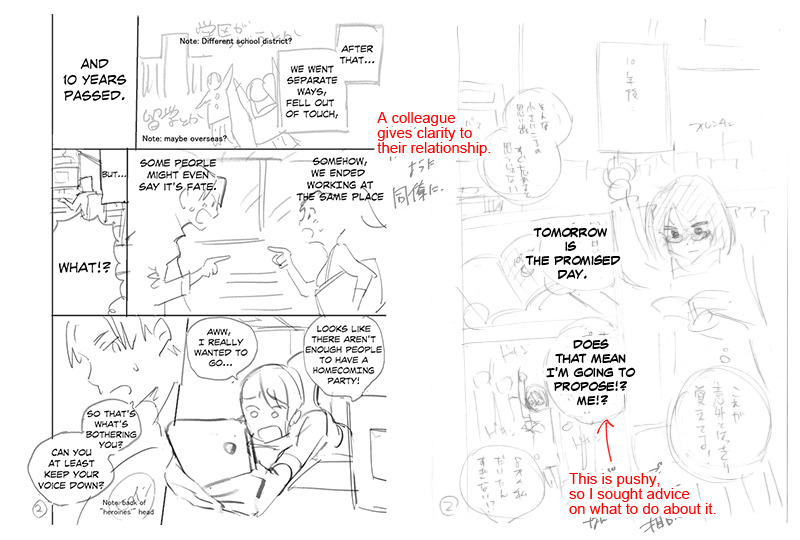 This page depicts the protagonists and their current relationship status. The topic of the reunion in the clean storyboard is inserted to elicit a reaction to how he they now feel about becoming an adult. 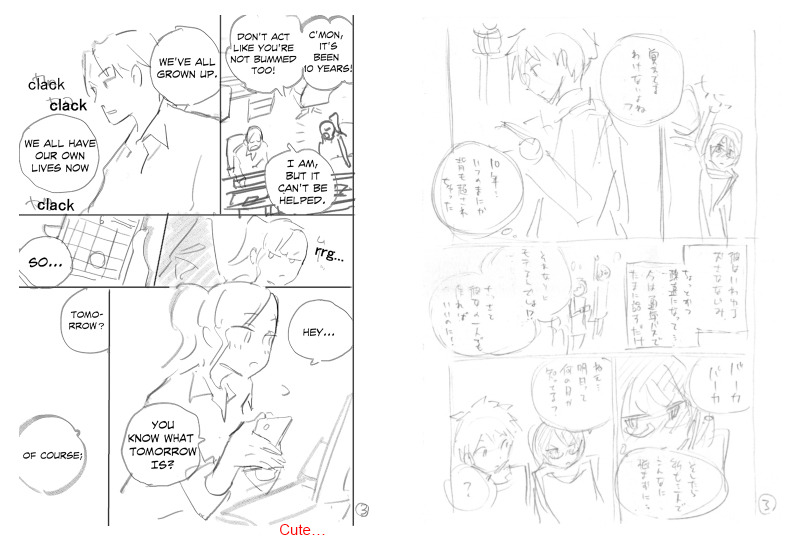 The story continues with the intermingling of their thoughts of one another. The clean storyboard changed this to a slightly more objective frame layout, which makes sense with the story's development. 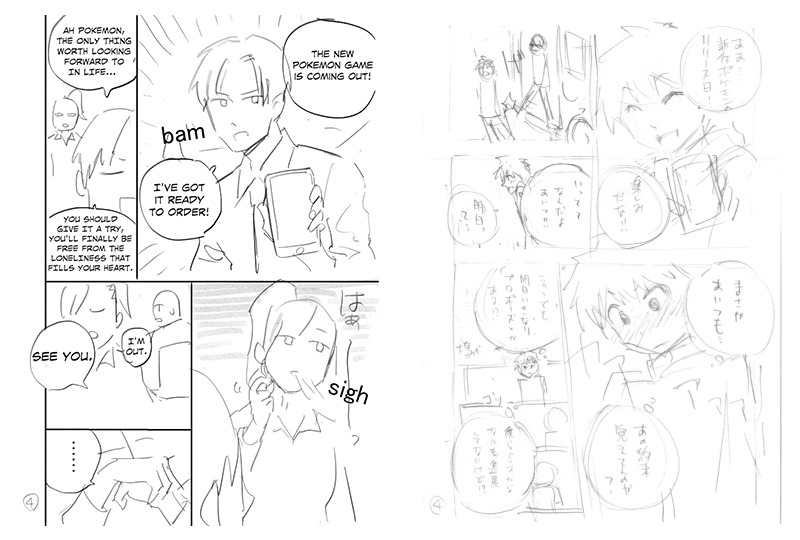 To make a natural connection to the climactic sixth page, we will draw the thoughts and feelings of each character. 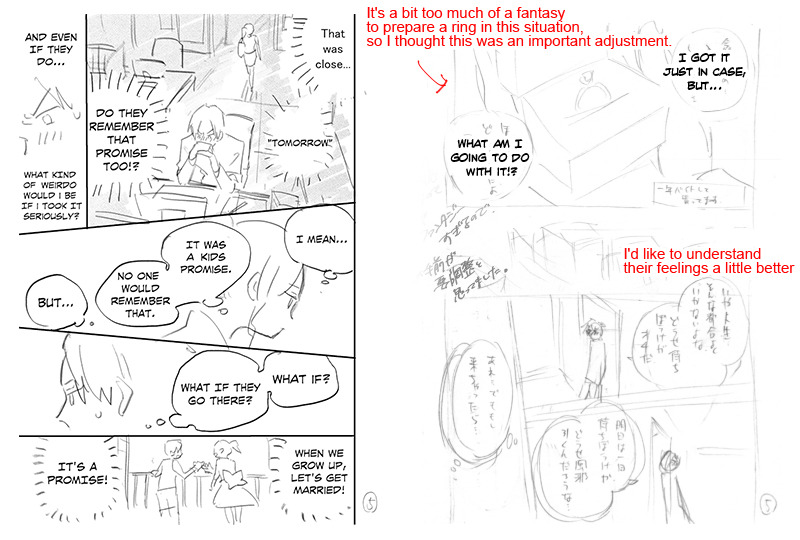 Finally, the climax gives use a sense of catharsis by depicting the fulfillment of the promise. 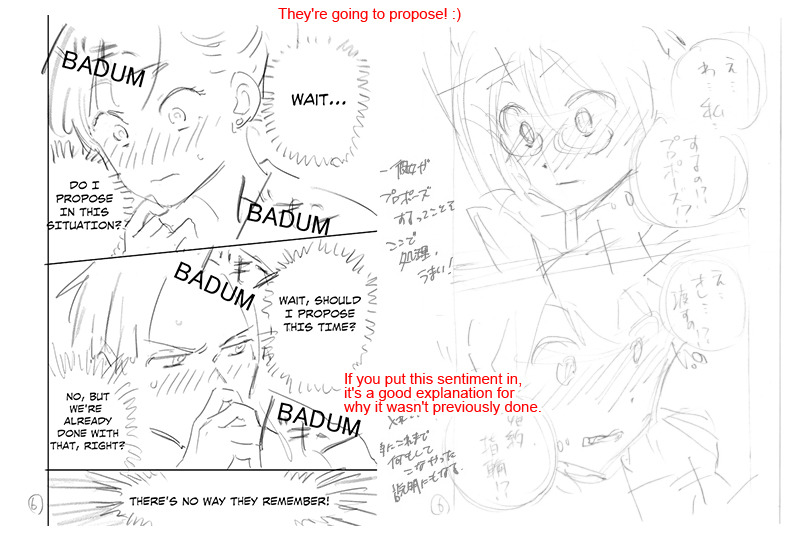 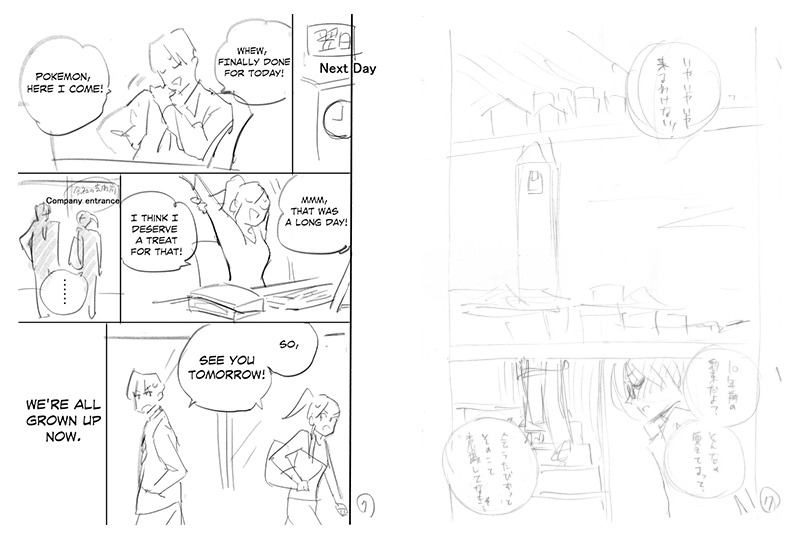 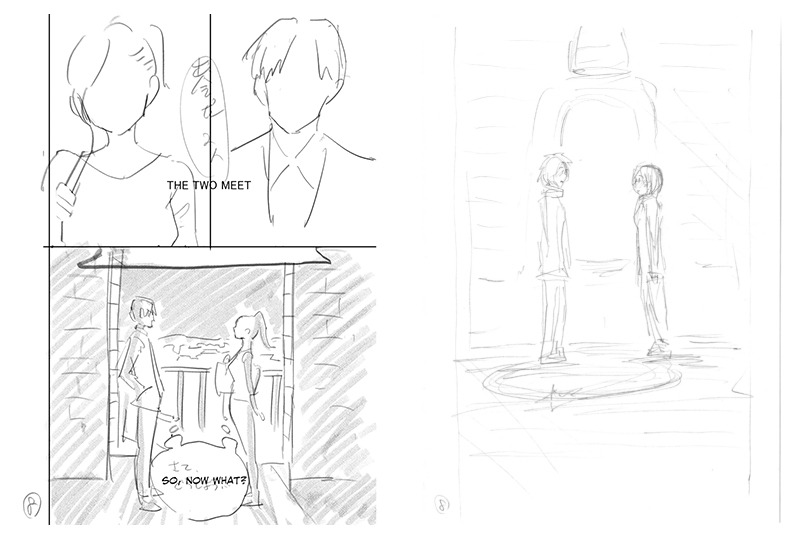 Lost in creating a storyboard? How to escape!

In the shojo manga version, I got lost going from the plot to the storyboard, so I want to introduce a couple of escape methods I used to overcome it.

(1) Be aware of an objective point of view

When you're trying to describe an unusual situation or emotion in a story, it's very difficult to judge how well it will come across to the reader. In this kind of situation, you should take a step back and sleep on it or ask another person or an editor to give an objective review.

Give priority to what you want to draw. For this storyboard, it was the female protagonist proposing to the other character. If you don't defer to yourself, you will lose your way and find it hard to get back on track when creating a story. The first thing you need to do is to be honest with yourself and acknowledge things and feelings you like. Don’t throw this away. If we can do that, I think we will eventually be able to make our way and take our first step towards completion.

You can also watch a video explaining the contents of this article.

How to Create a Story #4 by ClipStudioOfficial