Since I finished painting the characters, I will work on the remaining background.

Next, I will paint the bottled salad.

Since I don't need to draw any areas that are overlapped with other parts, I leave the forefront folders (“Foreground", “Character 1", “Character 2", “Ladder" and “Ground”) visible too. 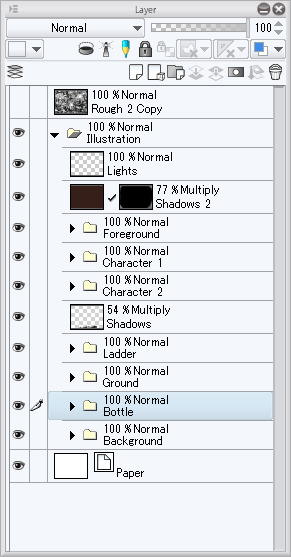 I use the same method as before to paint the contents of the bottle.

I divide the layers into individual parts and paint while leaving some of the lines visible.

For the parts that go over the lines, I create a layer mask inside the “Bottle” folder and hide them.

The vegetables at the top are a bit unclear, so I draw in details to make the shape clearer.

After drawing the contents, I work on the outline and highlights of the bottle.

I create two new layers at the top of the “Upper: Bottle” folder.

Then, I select the “Bottle line” layer. 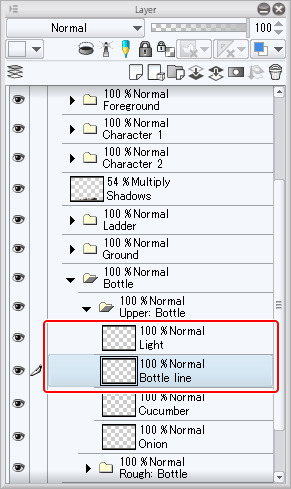 The [Tool Property] settings are as following. 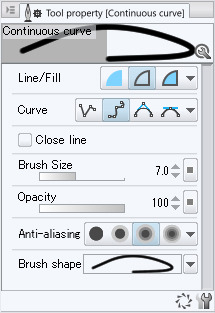 I draw a black curve along the outline of the bottle so that the lines are slightly further out that than the outline.

Although it is hard to see, I also draw a black [Continuous curve] at the top of the bottle using the same method. 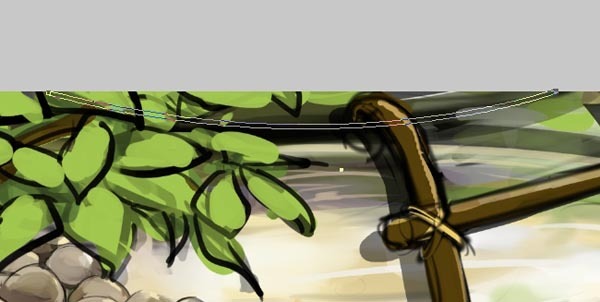 [2] Adding highlights to the bottle

Next I’ll add some highlights.

By painting the highlights slightly inward from the border outline, I can strengthen the feeling of things being inside the bottle.

I select and duplicate the “Bottle lines” layer I just drew.

I turn on [Lock Transparent Pixel] for the duplicated “Bottle lines Copy” layer and paint it white. 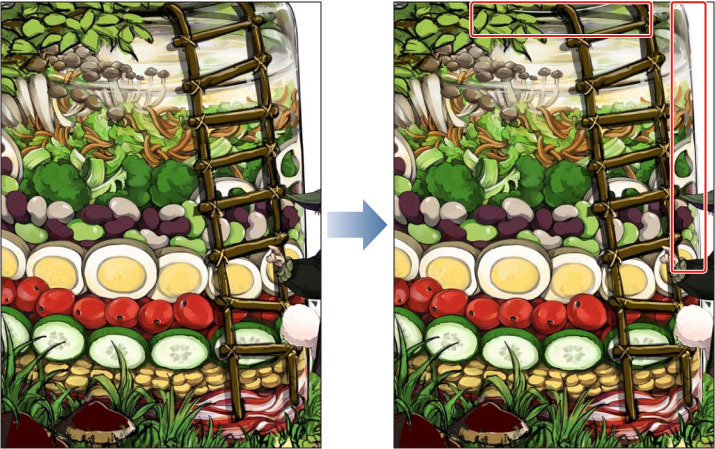 After painting, I turn off [Lock Transparent Pixel].

I use the [Selection area] tool > [Lasso] sub tool to surround the right outlines of the bottle. 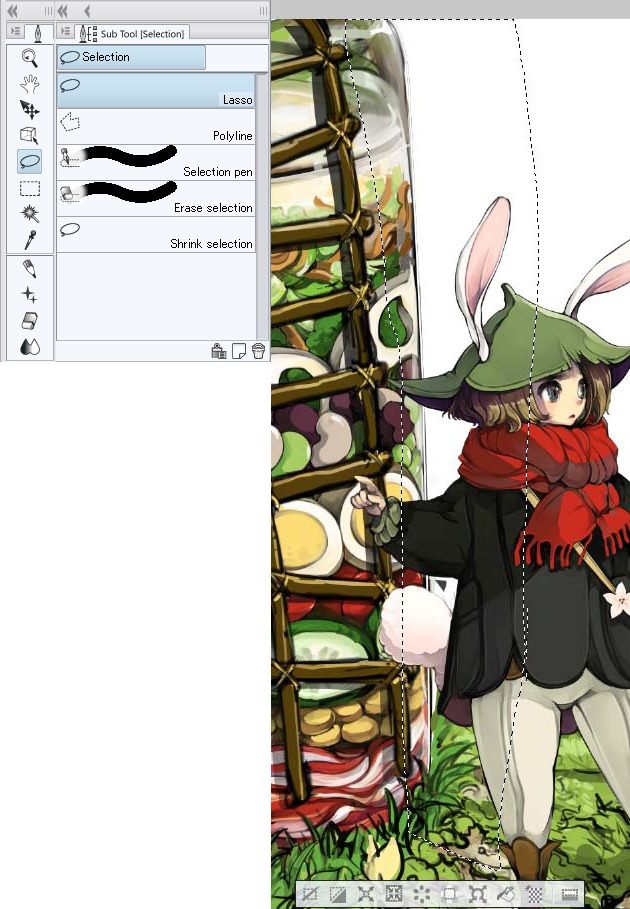 I select the [Move layer] tool and press the left direction key twice to shift the selected part.

In the same way, I select the opening of the bottle with the [Lasso] tool and shift it using the [Move layer] tool and direction key.

I shift the mouth five times toward the bottom right.

The white line at the opening looks too bright, so I turn on [Lock Transparent Pixel] and darken the parts under the leaves. 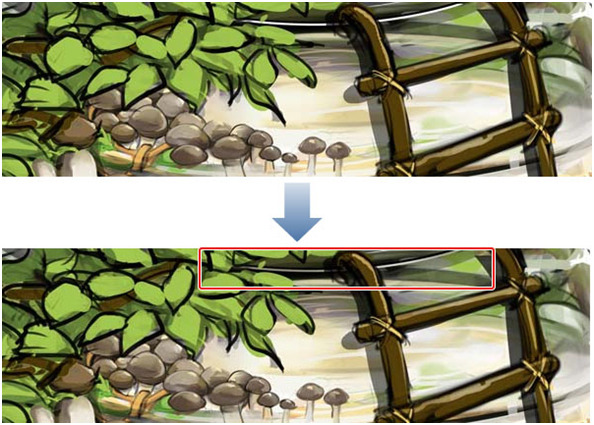 Finally, I select the “Light” layer and add more light with the brush to improve the texture of the glass and liquid. 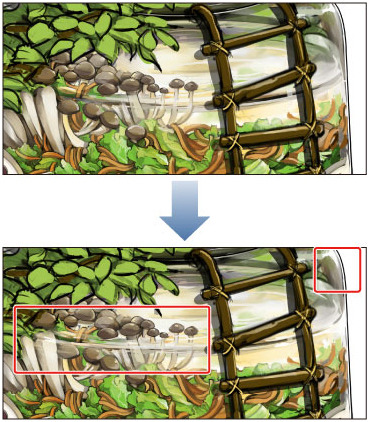 Now, I will work on painting the ladder.

I hide the “Shadow” layer below the rough draft ladder as I will create it again. 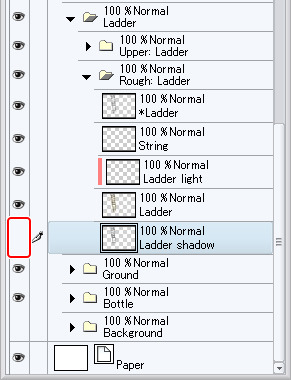 I paint using the same method as before.

I divide the layers inside the “Upper: Ladder” folder while painting and tidying up the ladder. 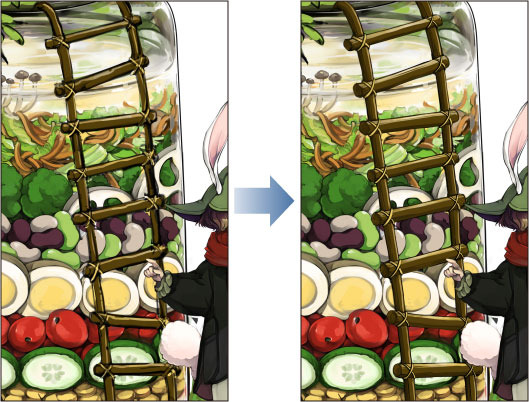 After painting, I add the shadow.

I select the “Ladder” folder and select [Duplicate Layer] from the right-click menu.

I right-click above the duplicated folder and select [Combine Selected Layer] to merge the “Ladder” folder into a single layer.

Then, I change the layer name to “Ladder shadow” and turn on [Lock Transparent Pixel].

Afterwards, I move the “Ladder shadow” layer to the bottom of the “Ladder” folder.

I shift the position of the layer using the [Move layer] tool and then lower the layer opacity to 62%. 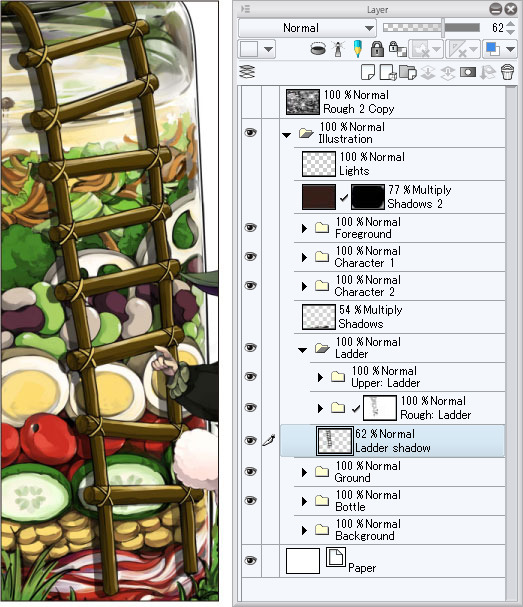 Next, I create a layer mask on the “Ladder Shadow” layer, and make the bottom part a bit thinner with the [Soft eraser] (Opacity approx. 20%) to finish painting the ladder.

I will paint the remaining background elements.

A lot of the elements in the back and on the ground are very sketchy in the rough draft, so I firm up the shapes while painting.

For the distant ground and the back, I paint in a way that leaves very faint lines. 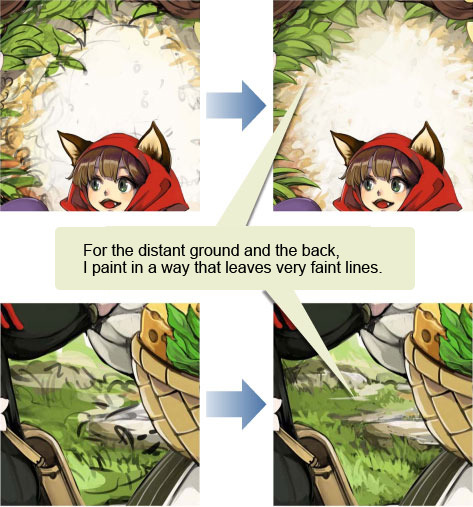 Once I finish drawing the shapes under the moss, I add more details.

I add highlights to the grapes to make them look juicy. 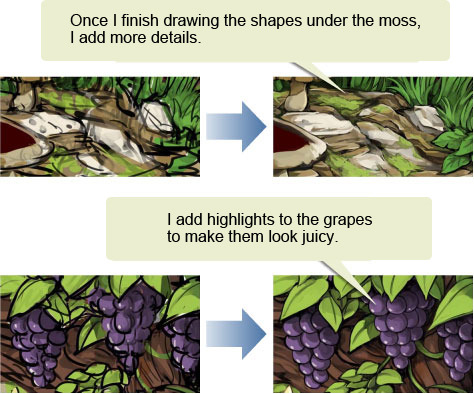 I tidy up the rough grass and leaves in the foreground and add more lines to clarify the boundaries between overlapping leaves. 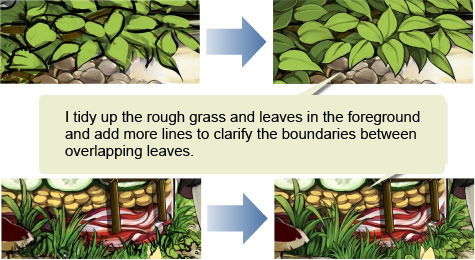 Now I’ve finished all of the main painting steps. In the next lesson, I’ll add some finishing touches to complete the illustration. 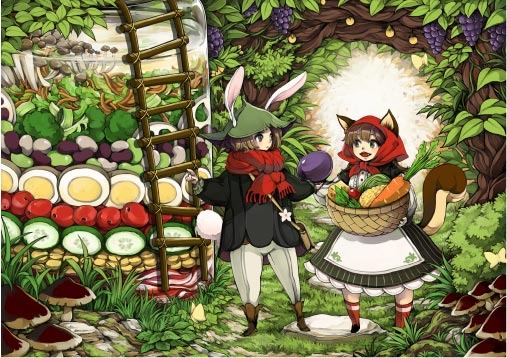