Here, I will make final adjustments such adding lines and altering the shadows and highlights.

After painting, there are more colored areas and fewer lines. 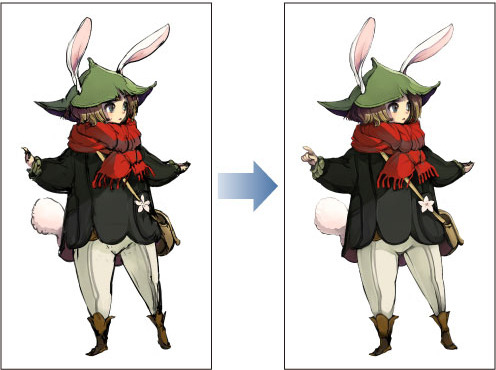 This can create a slightly blurred impression in some places. Therefore, I take a look at the whole picture and add extra lines to places where the lines are too faint.

I display all the layers so I can see the overall balance.

I was concerned that lines on the characters were too faint, so I decided to add more lines. 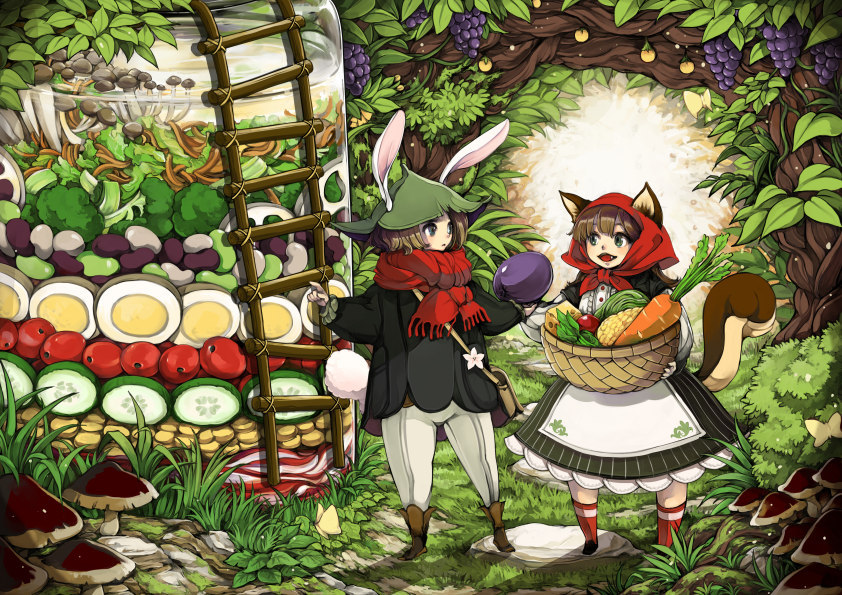 I create a new layer above both “Character 1” and “Character 2” layer folders and change the layer name to “Lines”.

Excess lines can harm the overall balance, so I keep to a moderate amount of lines. 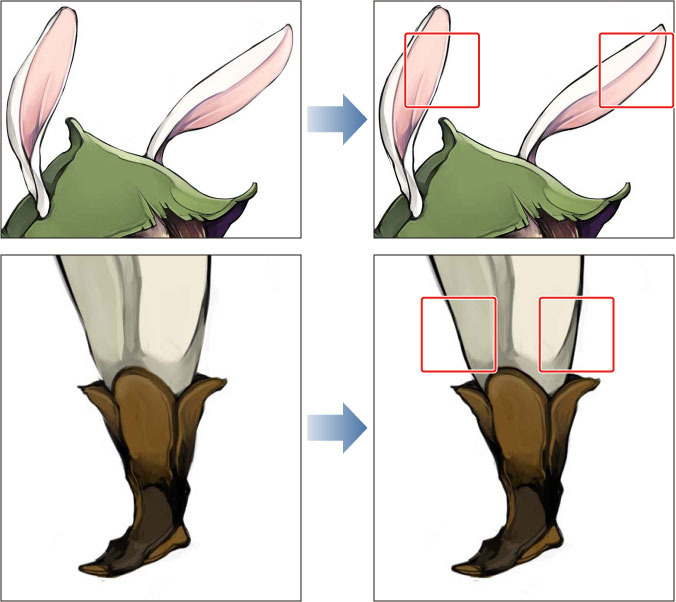 Next, I will fix the shadows below the characters.

I display the “Shadow 2” layer created in the rough draft stage. After adjusting the shape to some extent according to the position of the feet, I add a layer mask to make certain parts slightly thinner. 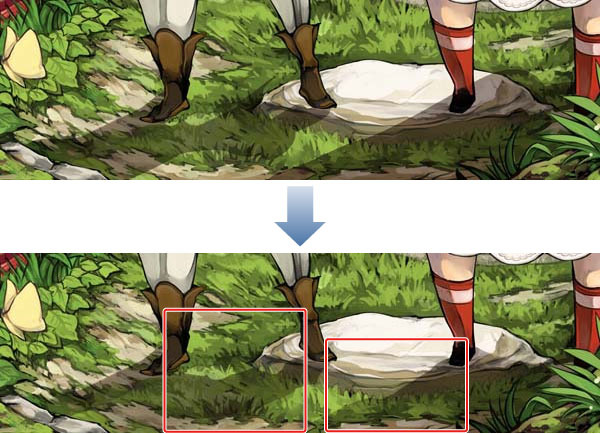 Next I’ll tidy up the shadows near the edges of the canvas in the same way.

At the rough draft stage, I wasn’t sure whether I would use these shadows, but I decide to keep them. This is because the darker canvas creates an atmosphere similar to a cave or a tunnel.

I display the “Shadow 2” layer. The shadows were drawn with sharp lines in the rough draft stage, so I blur the entire layer and then added some extra shadows. 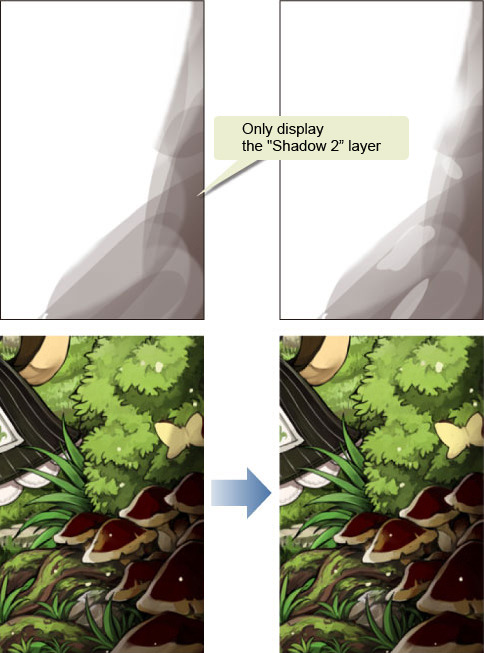 The last thing to do is tidy up the scattered grains of light.

On the “Light” layer I tidy up any parts where the shape is messy, and add extra light to some areas.

Then, I duplicate the “Light” layer using “Duplicate Layer” from the layer menu.

After that, I use [Merge with layer below] to make the light a bit stronger, then fade out some parts with the [Eraser] tool. 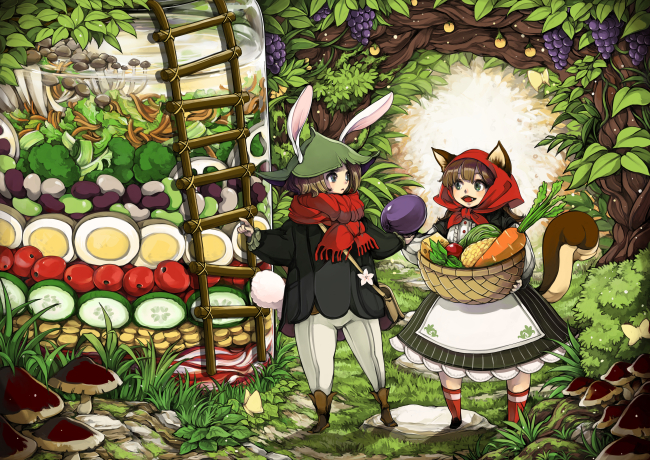 To add a traditional feeling, I will use a texture.

I go to the left tree view of the [Material palette] and select [Monochromatic pattern] > [Texture]. Here, I select the texture “Oil paint”.

I drag the selected material in to [Layer] palette and place it. 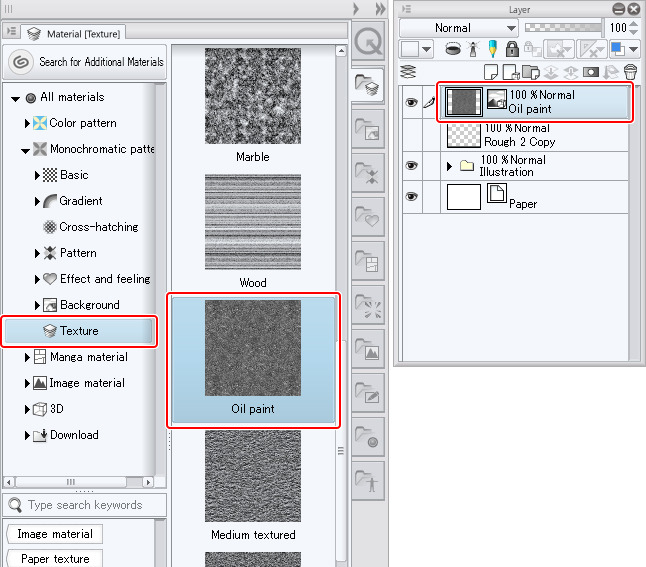 Above the “Oil paint” texture, I open the [Layer] menu > [New Layer] > [Fill], and create a [Fill] layer with a muted ochre color. 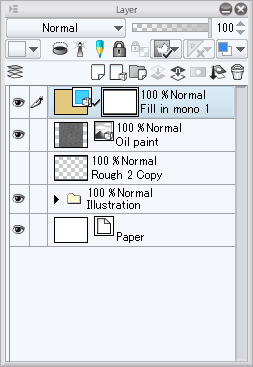 Please read the following to learn more about Fill layers.

I set the blending mode of the yellow [Fill] layer to [Overlay]. 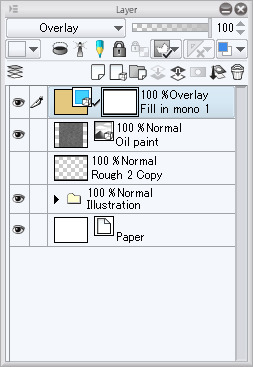 Then, I use [Merge with layer below] to combine it with the “Oil paint” texture layer. 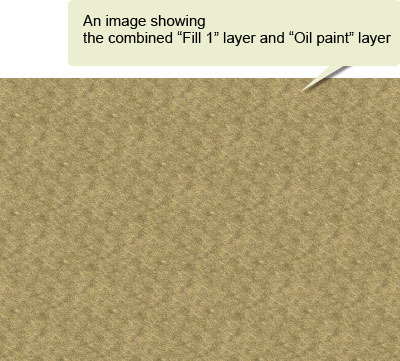 From the [Layer] menu, I select [New Correction Layer] > [Hue/Saturation/Luminosity] and apply the following settings.

I combine the new correction layer and the oil paint layer using [Merge with layer below].

Then, I lower the layer’s opacity to 32%. Finally, I change the blending mode of the [Layer] to [Darken] to complete my illustration. 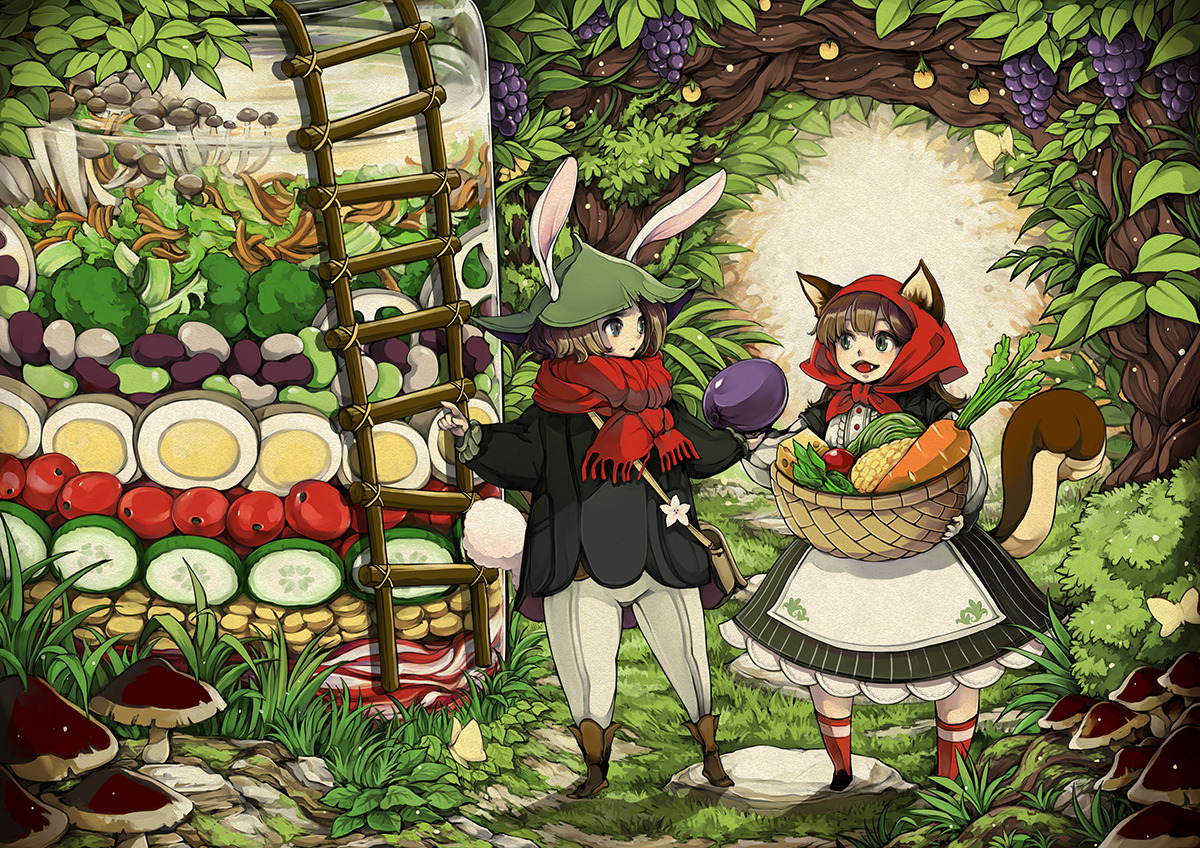