Animator Yoshibe Naoki gave us [Basic] and [Advanced] lessons on animation. We also asked him about how he got to where he is now!

【Yoshihiro Yoshino interview】 Make an animation in a month! [Basic] is here

【Yoshibe Naoki interview】 Make an animation in a month! [Advanced] is here

Why did you decide to become an animator?

I’ve been into drawing since high school, but I didn’t have any real goals. I decided to major in animation because I just wanted to keep drawing. The moment I decided to become an animator was when I saw the keyframe work of Norio Matsumoto, who was a director of “NARUTO”. After that, I watched something else Matsumoto made, and another thing he made... and just decided along the way.

Can you tell us about your debut as an animator?

After graduating, I worked as an inbetweener at an animation company for about a year. Around that time, Hiroshi Ikehata happened to be looking for an animator online, so I applied, got the job, and he eventually let me work on some key animation. That was my debut as a key animator. I went freelance after a while, and worked as a key animator while working on personal projects, which, fortunately, led to other jobs like music videos. 2 years later, I joined the animation production company “Kamikaze Douga” and stayed for 5 whole years, left, and that brings us here.

What was your first completed animation?

I don’t really remember... but this animation was made in my freshman year.

This was in my sophomore year. You can kind of see my current style here.

There’s an obvious homage to ep.22 of “Neo Genesis Evangelion”, where the Spear of Longinus blasts through the clouds. I can’t do this now, but when I was learning how to animate, I often imitated other people’s works. Calling it imitation might be generous though. I remember how frustrated I was at how out of reach their works were. I still feel the same way sometimes.

I also drew a lot of flipbook animations like the one’s on my Dailymotion account. Striving to animate dynamically contributed to my current skills as well.

This is my thesis film “Around the World!”.

You can see the influence of Yuasa Masaaki 's “Mind Game” in this project. It was also around this time when I went fully digital. At that time, I sketched out the movement on a Photoshop video layer, inked the frames with SAI, and used After Effects to composite them into an animation.

Who’s work would you say influenced you the most?

It’s difficult when it comes to most influential, but I think Yuasa’s work had a great influence. For example, films like “Mind Game” mixed live action and animation. It made me realize anything is allowed in animation. It’s also why I recommend rotoscoping to absolute beginners.

* Rotoscope ... An animation technique where animation is made from a pre-recorded video.

Anyone can shoot video on their smartphones and iPhones, so think of tracing over that. You also don’t need to draw 30 frames. Just choose 6-8 keyframes, play them back, and you’ll get a decent animation.

It’s also a good technique for people who have a specific motion in mind but having a hard time drawing it. Just keep in mind that it takes some effort to fit the video to an animated character. 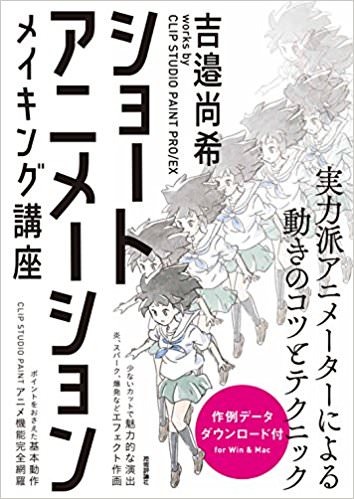 Learn from a pro! Make an animation in a month! #3 by ClipStudioOfficial