When suddenly changing from digital to traditional workspaces, sometimes our old habits of using the Lasso and Transform tools don't really translate over into our sketchbooks or painting canvasses.

If you want to transfer a sketch from a sketchbook into CSP for colouring and editing, a great resource to use is their library of 3D models to check your work! 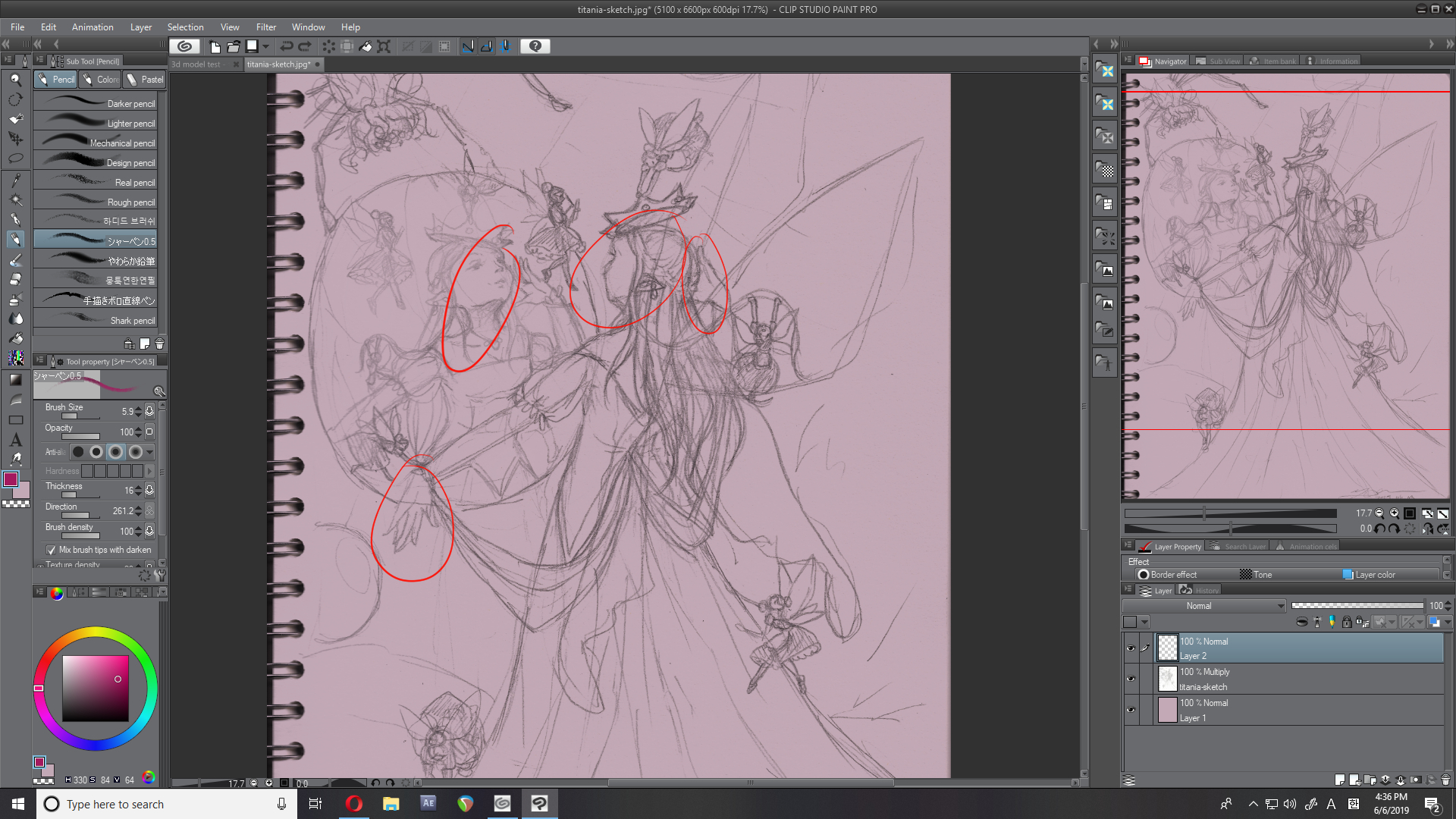 Let's use a sketch I have of Titania, the Fairy Queen as a reference work!

For the purposes of this tip, I'm going to only focus on the main figure -- Titania, herself.

In both the reflection and the main figure, you can already see some glaring anatomy issues, mostly her hands and the angling of her head. The sketch provides a good layout for how the composition is going to be laid out, but if we're going to finish this, we should correct the issues BEFORE diving into lineart, colouring, etc. 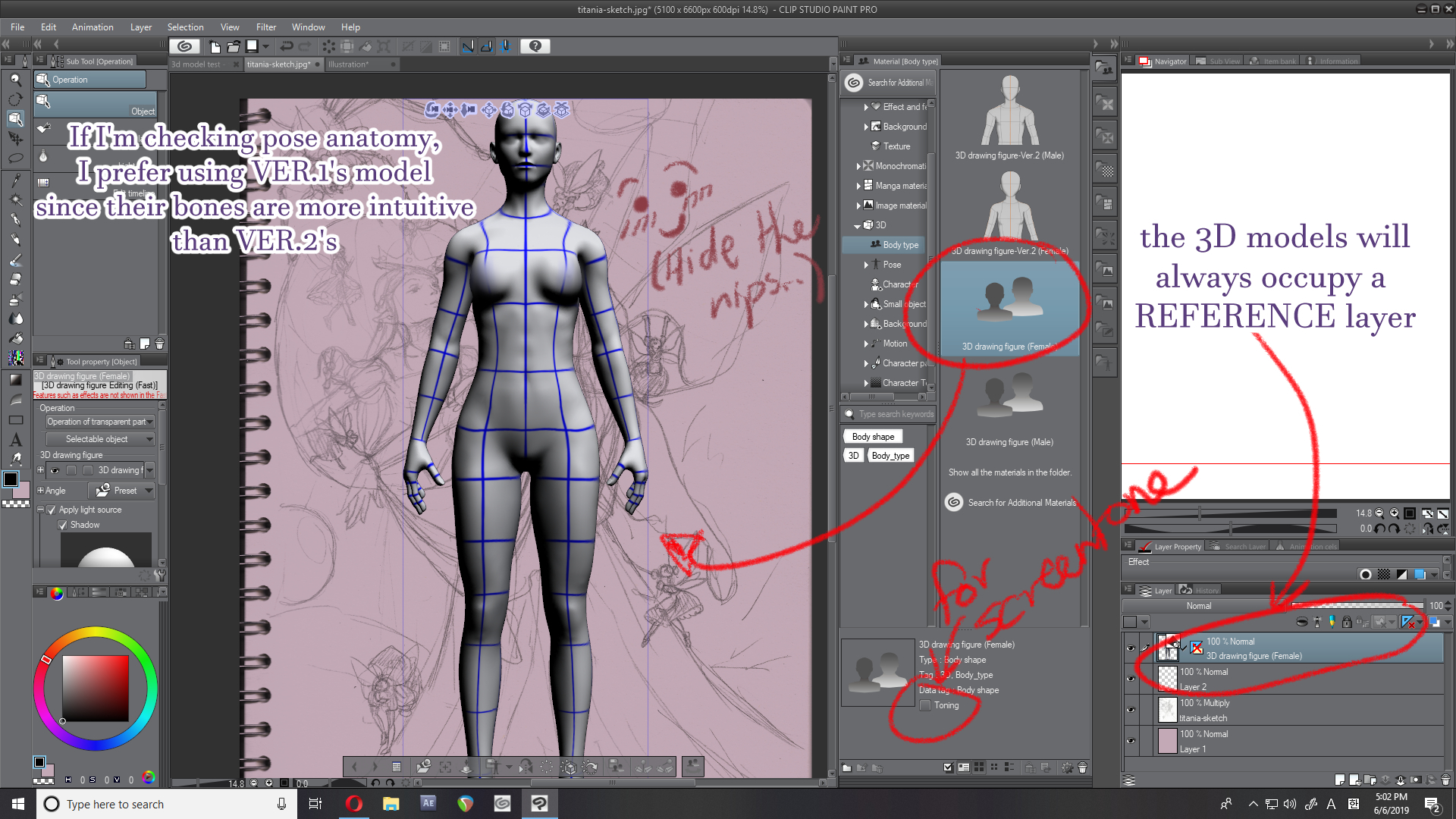 I tried using VER.1 of the model before for another work, but there weren't enough bones or anatomy details for me to play around with, and the proportions were a bit too young for Titania. VER.2 has visible nipples, so if that bothers you, turn off the "Apply light source" option in the Tool Menu.

I didn't care much about the nipples, but the unmovable light source bothered me, so I turned it off anyway for reference sake.

Note that these will ALWAYS import as a separate Reference layer. The 3D model functions on its own "window" with its own light source, plane and camera. Experiment with the small toolbar at the top of the model to get used to controlling the model. 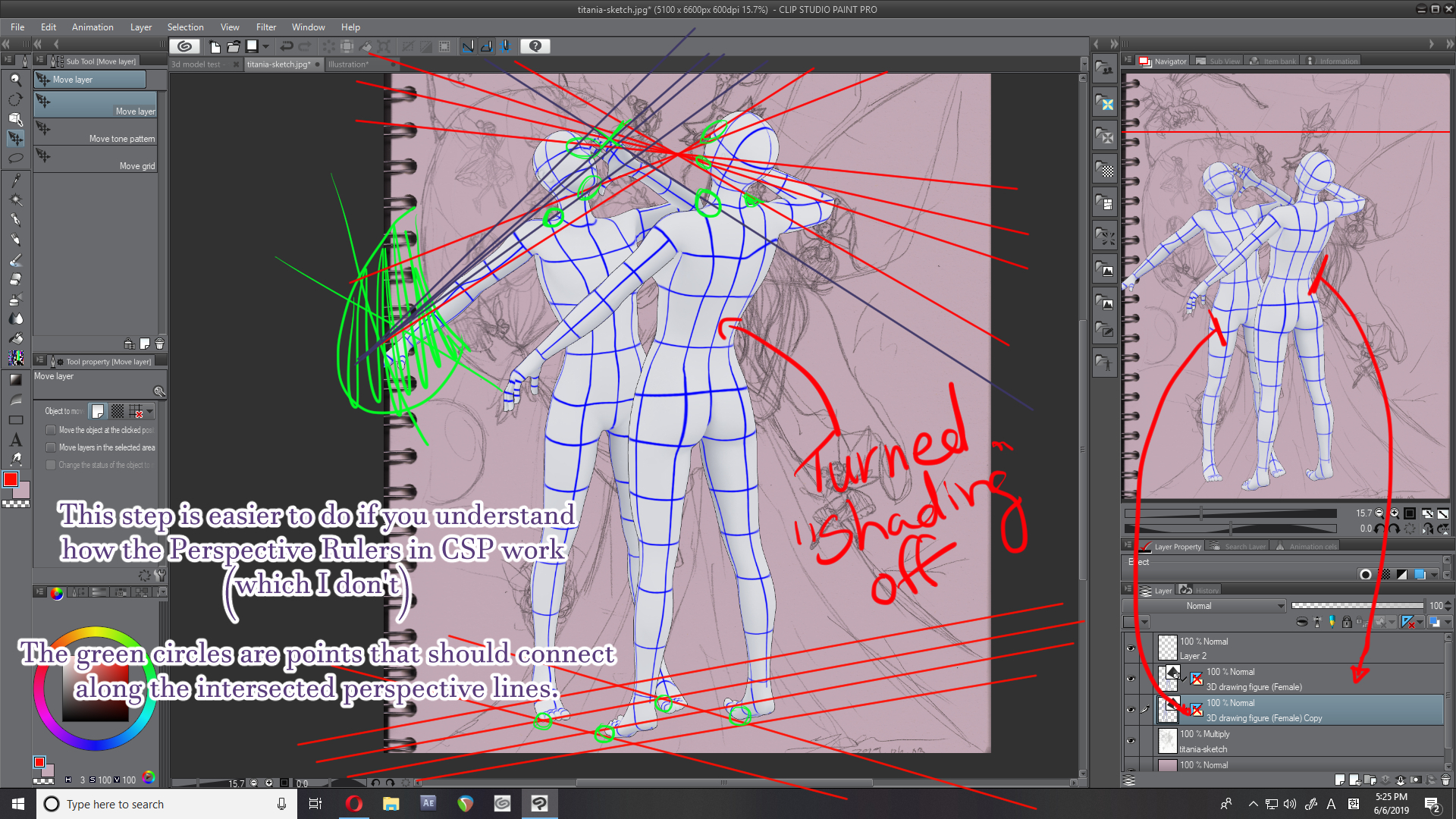 Once you have your initial pose set up, arrange them in comparison to your original sketch. If you want, you can use Perspective Rulers on another Reference layer for the checking stage.

Perspective lines should be on common lines, such as the tops of shoulders, balls of feet, noses, etc.

In this initial test, I found that a lot of them DIDN'T match, so I had to go back to the posing stage... 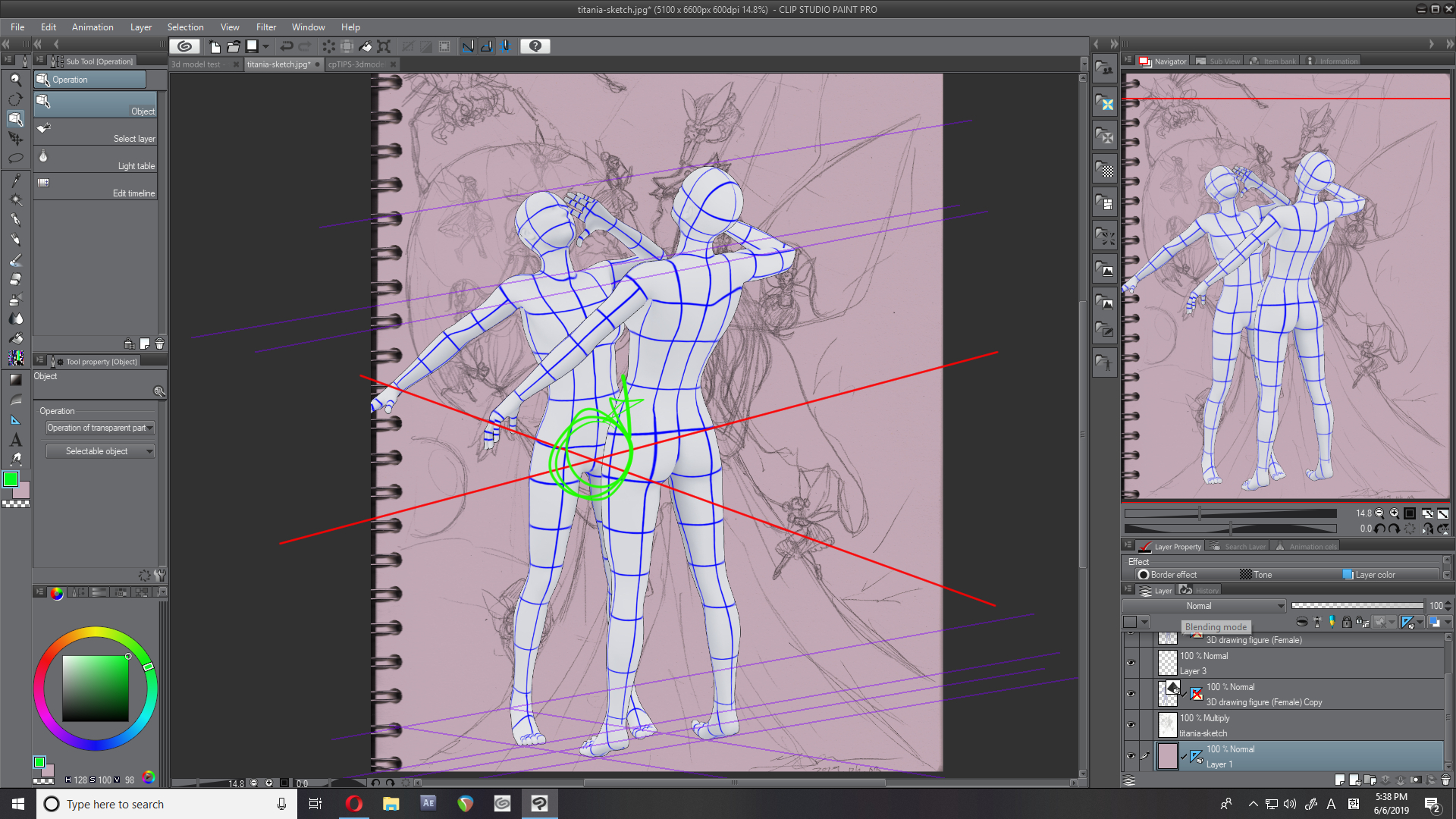 This time, I used line rules to check the planes on a separate Reference layer, but I also used my own cross-section to see if the mid-points (the crotch areas) would align at some point in between them. It did, and the Reference Rulers pretty much lined up too, so it's time to move onto the next stage. 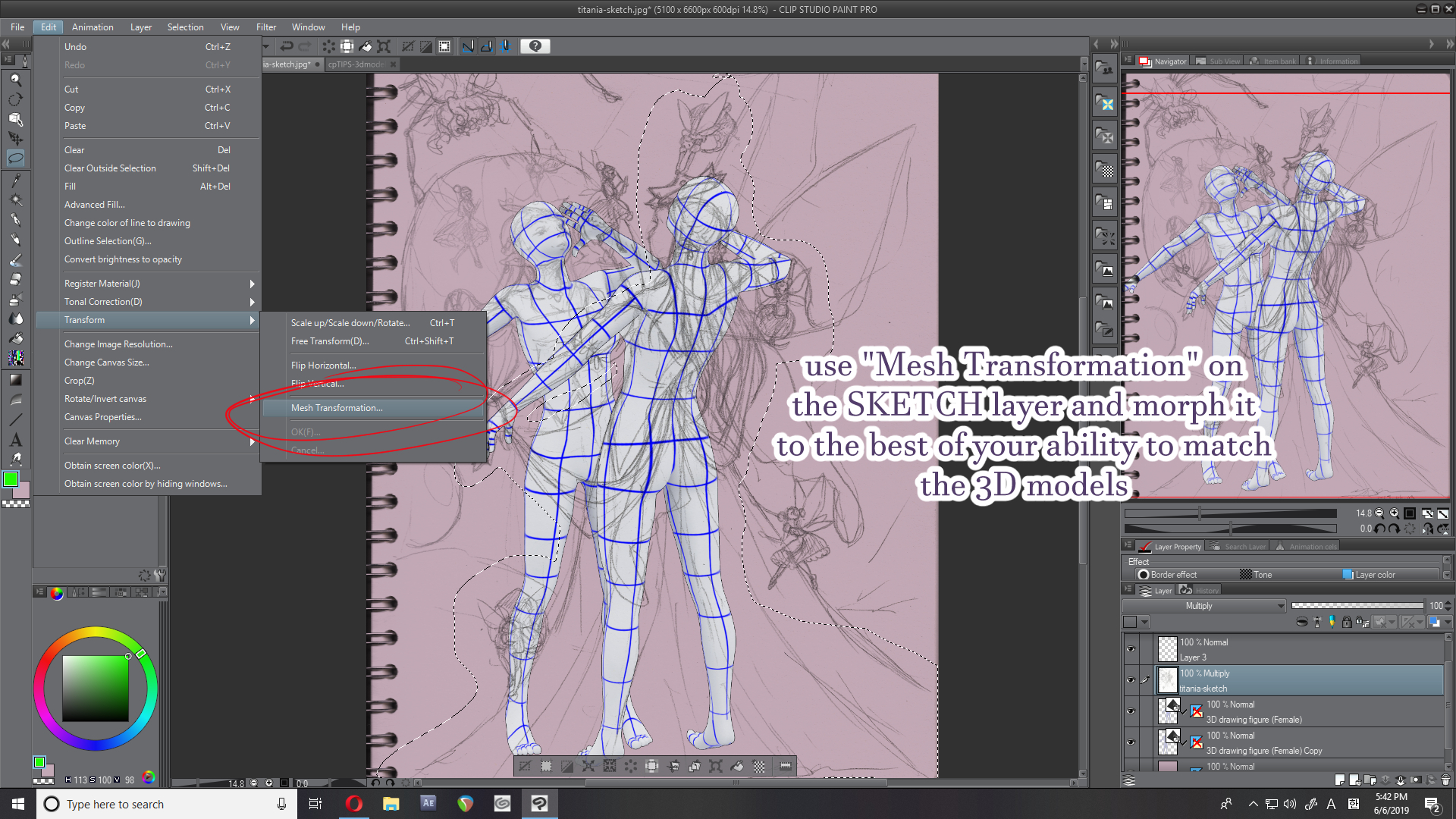 If your scanned image was as hefty as mine, highlighting the ENTIRE figure for the process was probably not the best idea. (The lag is REALLY bad, and I already use a high-spec desktop PC. Anything less than this would probably crash the program.) Highlight sections at a time when working on your own project if it's bigger than 3000px width at 300dpi.

When using the [Mesh Transformation] tool, try and match it up with your model to the best of your ability. If you had issues of figuring out anatomy like I did, you're probably not going to be very successful in this... 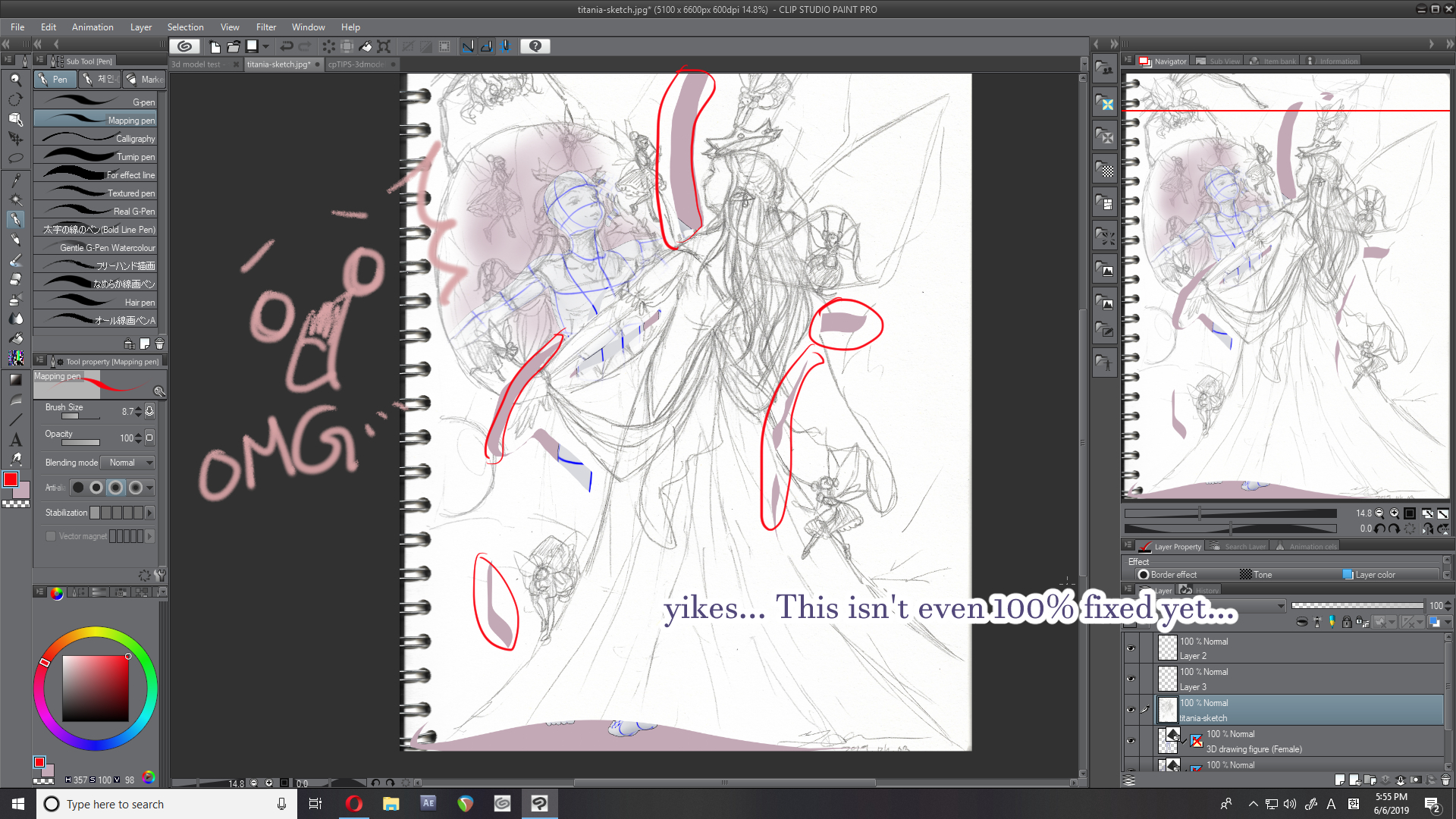 It's already starting to look a bit more balanced than the first time around, but there are still some glaring errors.

The really tricky thing about anatomy is that ONE WRONG PART can screw up another 5 or 6 points, which then proceed to screw everything else around it up.

Doing a comparison of the sketch and the model like this helps pinpoint exactly WHERE the error started. For instance, I figured out that my error started with the shoulders and the lifted hand: the shoulder joint was placed too low, which then pulled the entire arm down. The hand was also angled incorrectly and was drawn too small, resulting in a head much smaller than original sketch guidelines. The shoulder width was also too tight, even at its awkward angle, which made the arm way longer than it should have been.

#6: Checking the details (the Head and Face) 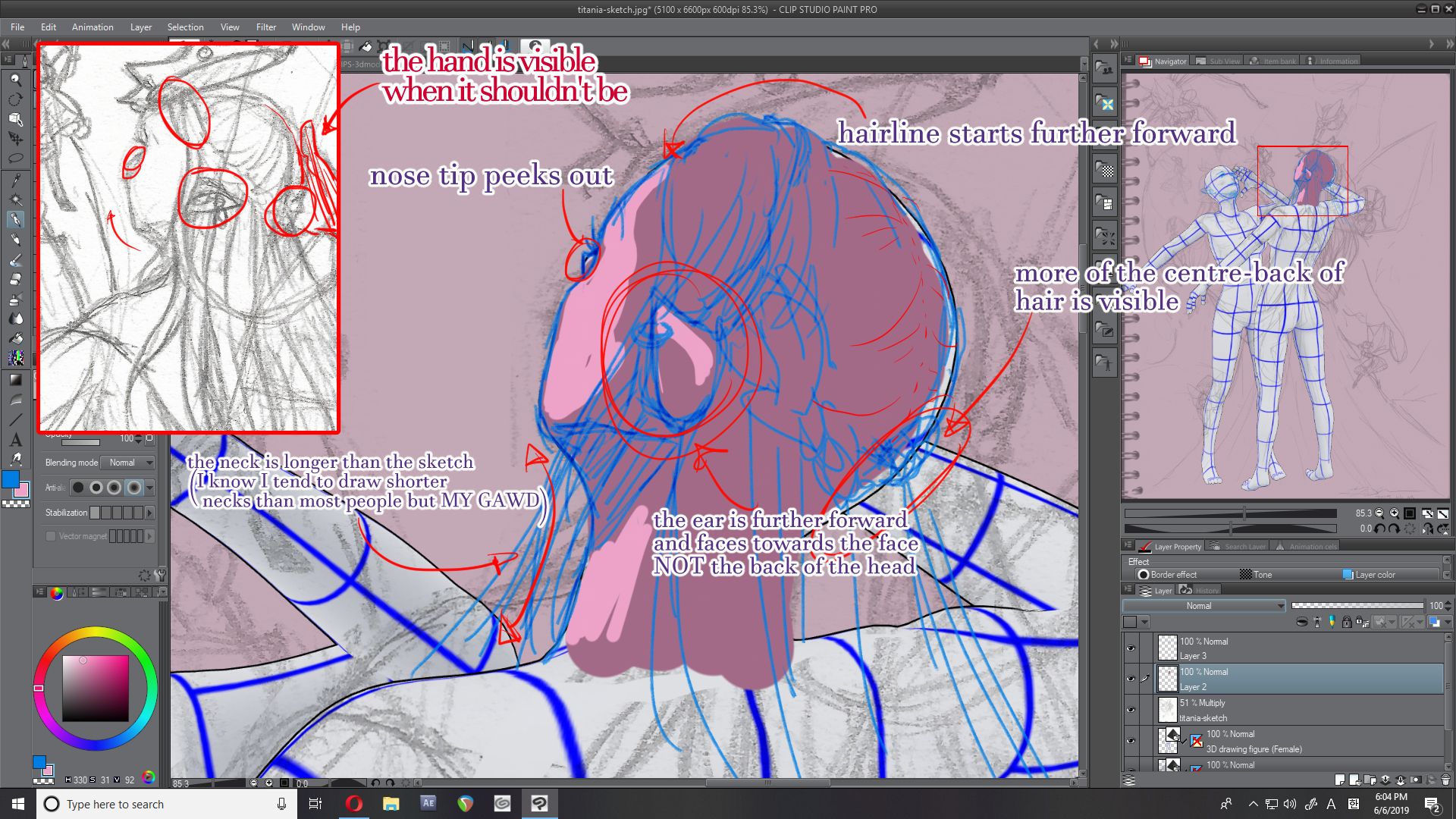 The initial sketch itself is already incorrect based on the sketch (this gets fixed in a later screenshot). But, it's already providing insight into what exactly went wrong:

- The neck appears too long in this screenshot because the head size is too small for the rest of the body
- the angling of the head was awkwardly wide, when the hairline and ears should be pulled further forward towards the face. This change in angle already suggests that the ear should be forward-facing, NOT backward-facing like the original sketch.
- the direction of the bangs and hair braid change as a result of the shifted hairline 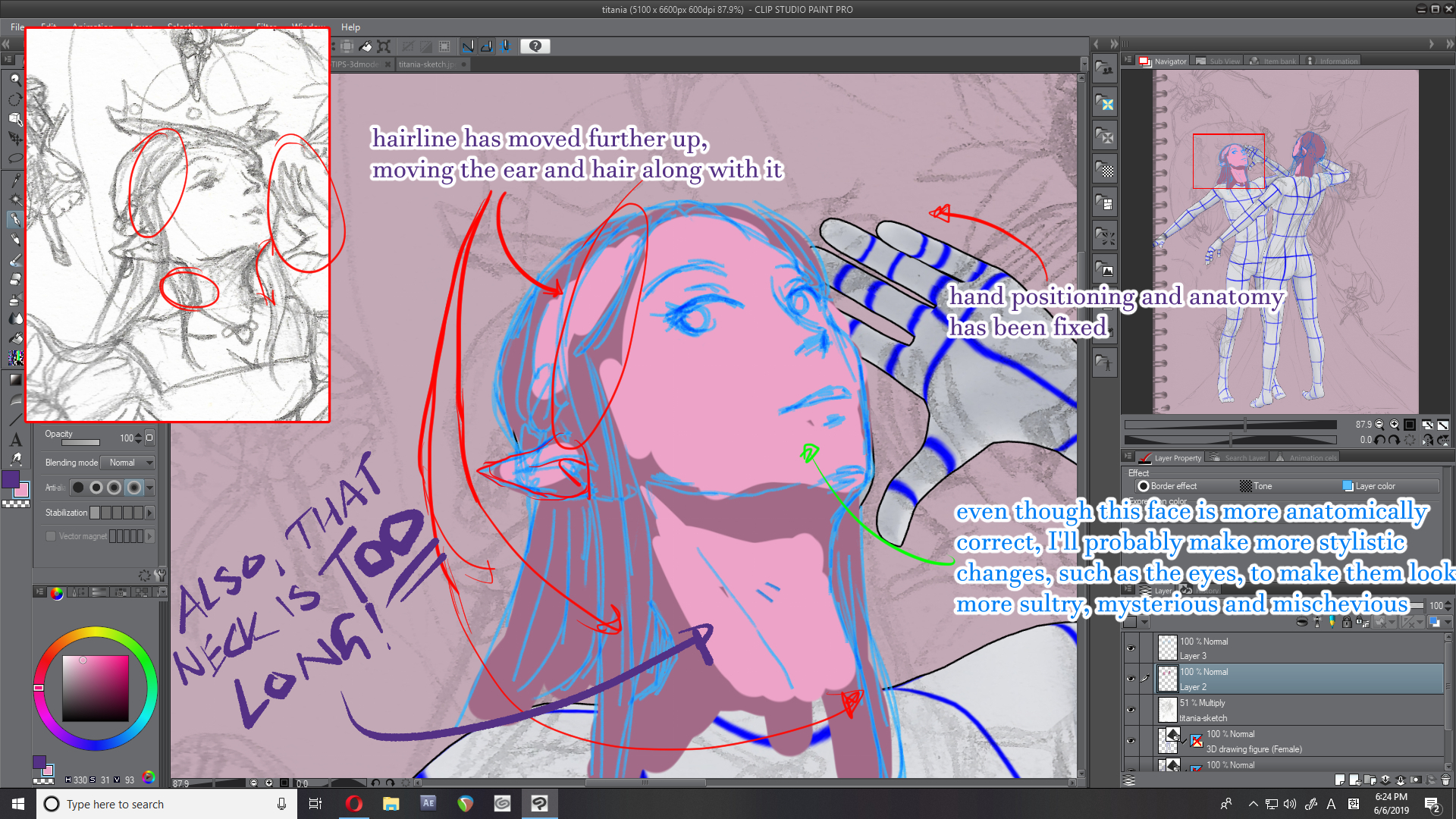 Similar issues are present with the forward-facing reflection.

Again, the head is too small and therefore, the neck is too long. The angle of the head suggests that the hairline has also moved further up than what the sketch showed.

At this point, I also realized I was half-asleep while drawing this and thought that both the reflection's ear and the main model's ear would be in the same angle as each other.... = A =;;; 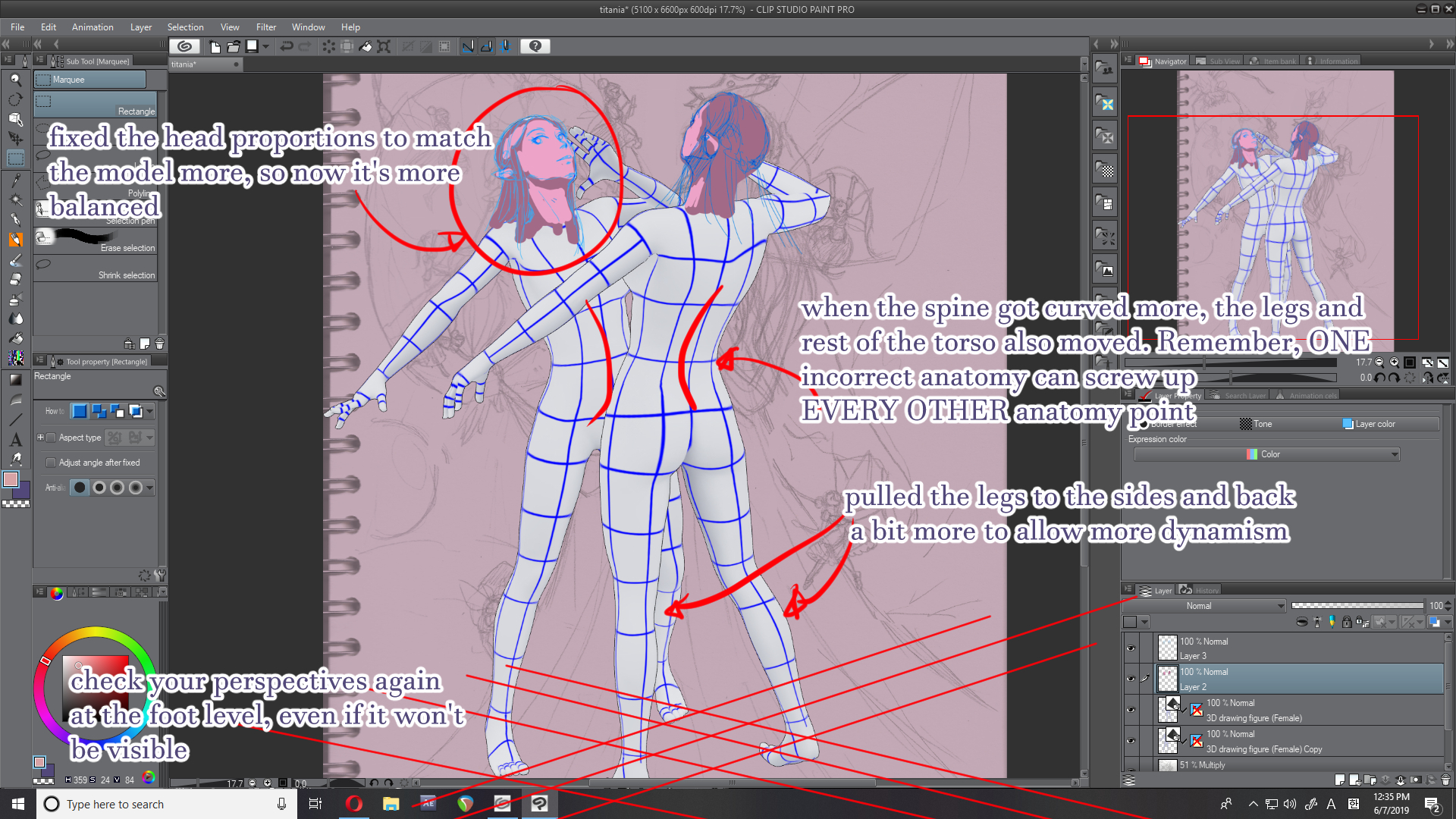 Before I move onto [Rasterize] the model layers, I played around with the spine bones again a bit before confirming the models.

The head positions revealed more details about how I wanted to complete the composition, and I realized it needed more dynamism. Again, check your perspectives and guidelines. I'm still using the crotch areas as the matching point.

If I want to keep the sketch as intact as possible, I'll have to change how close Titania is to her dewdrop mirror.

#6: After you [Rasterize] + Final Thoughts 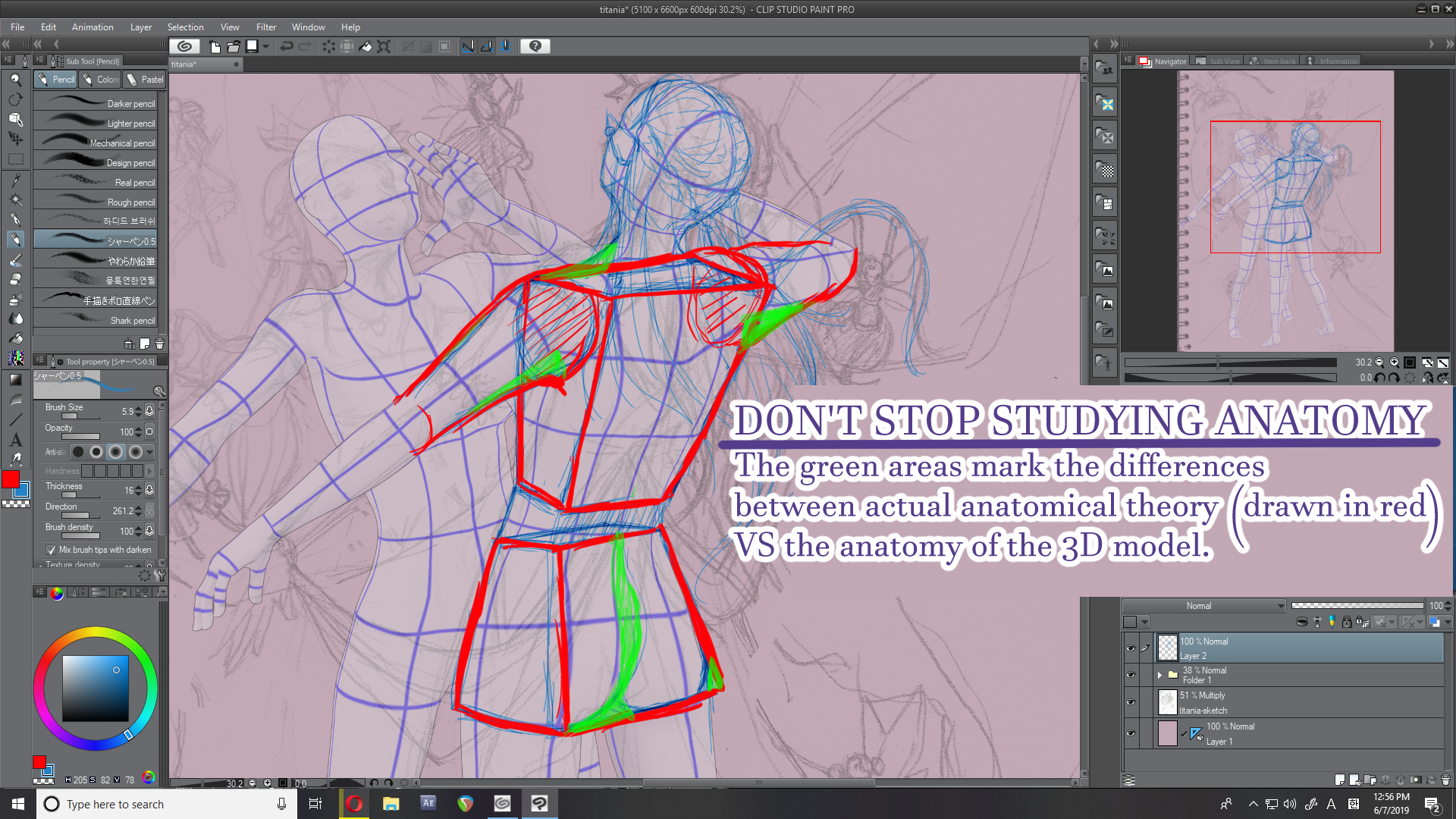 3D models of human figures -- not just CSPs, but EVERY 3D model - is not perfect.
After you [Rasterize] your layers, you should ALWAYS double-check the model.

In my example, her proportions don't translate over well when her bones are being moved in various positions. Her trapezius and tricep muscles are also missing in this model, so I had to compensate for that as well. Also, her bum was almost non-existent, which left with very flat lines.

Create a [New Layer] and sketch out your final proportions there.

Even though the 3D model can be a valuable resource for things like checking your work, creating a new pose for your figures and composition layouts, it's not perfect. You should still continue studying and practicing anatomy with human and animal figures. Our bodies are beautiful and complex, and 3D models aren't always going to be able to translate these accurately.


I hope that this tutorial has helped! Good luck!