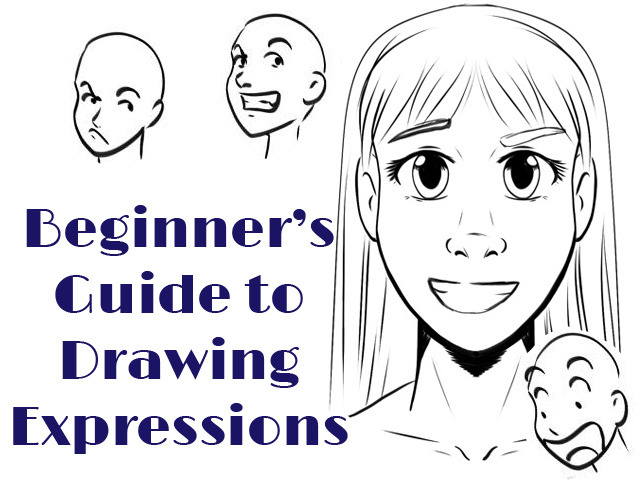 Hello! My name is Liz Staley and I’m a long-time user of Clip Studio Paint (I started using the program back when it was known as Manga Studio 4!). I was a beta-tester on the Manga Studio 5 program and for Clip Studio Paint, and I have written three books and several video courses about the program. Many of you probably know my name from those books, in fact. I write weekly posts on Graphixly.com and on CSP Tips, so be sure to come back every week to learn more Clip Studio Tips and Tricks from me!

Good expressions bring life to your illustrations and comics. The human face is extremely expressive, capable of conveying over 10,000 expressions! Facial expressions can be traced all the way back to our primitive roots, and are a very important part of both verbal and non-verbal communication. So being able to draw great expressions on your characters is very important, but many beginning artists struggle with conveying emotions. This article will attempt to break this subject down into easy to understand concepts that will help you with putting convincing expressions on your character’s faces.

In this article we will cover the following topics:
Eyebrow positions
Mouth expressions
Combining Eyebrows and Mouths
Exaggerating Expressions

I’ve personally found that a bulk of the emotion on a character’s face can be conveyed simply through the position and rotation of the eyebrows. After all, you can tell a lot about someone by their eyes! Have you ever seen someone force a smile, but you can tell it’s not genuine because the smile doesn’t reach their eyes?

In the following examples, I’ll be showing you a character with the same eye and mouth expression, but different eyebrows. Let’s explore how each eyebrow position changes the emotion! 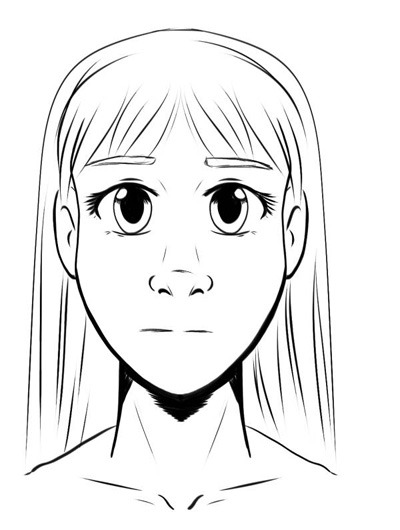 This expression is neutral. This character looks bored or like they could have a “. . .” in a speech bubble above their head. The eyebrows and the mouth and in a flat and neutral position. 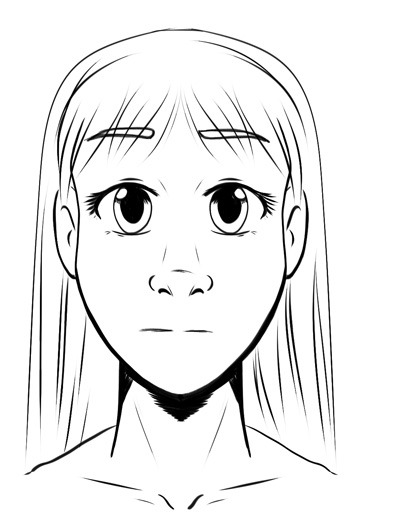 Moving the eyebrows up on the forehead conveys surprise, disbelief, or (with the correct mouth expression) extreme happiness. The character above is only mildly surprised because of the mouth expression, of course. Eyebrows in real life wouldn’t go up as far as our character above, but exaggeration looks good in comics and animation. 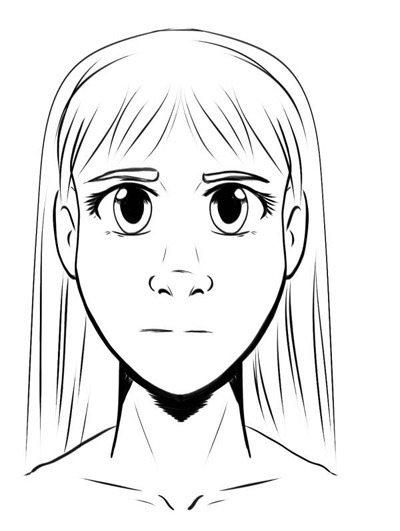 Moving the brows down toward the eyes conveys anger and upset. This character looks like someone just told a bad joke! 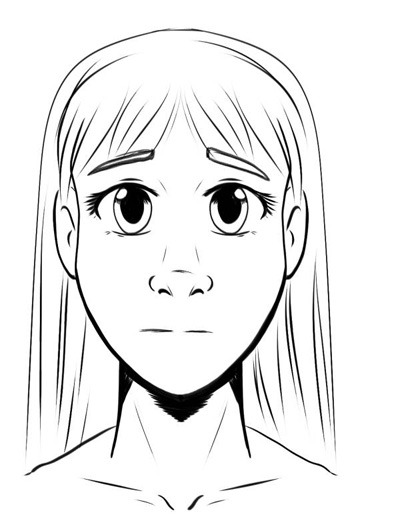 In addition to moving the eyebrows up and down, we can also rotate them. Rotating the eyebrows so that the outsides are pointing down and the insides are up toward the hairline conveys sadness. Add some tears and you have a character who is about to cry! 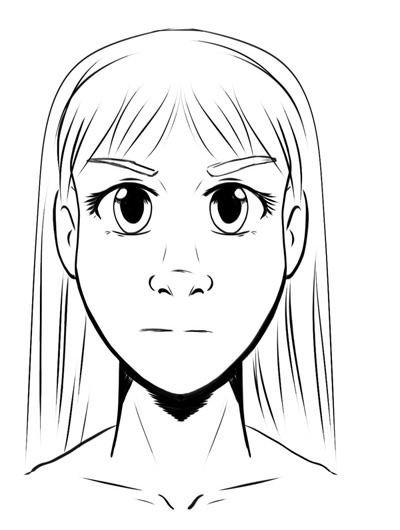 Rotating the brows in the opposite direction shows rage or anger. Combine this with pulling the brows down toward the eyelid to make your character very angry!

Those are the basic movements you can do with the eyebrows. Let’s now talk about how the mouth conveys expression too!

The mouth also plays an important role in the expression, though I find it to be secondary to the eyes and brow. Let’s look at a few different mouth expressions! 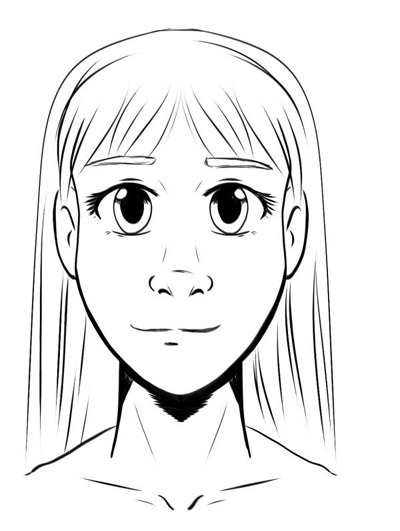 This one’s easy! Even with neutral brows, you can tell this character is happy. 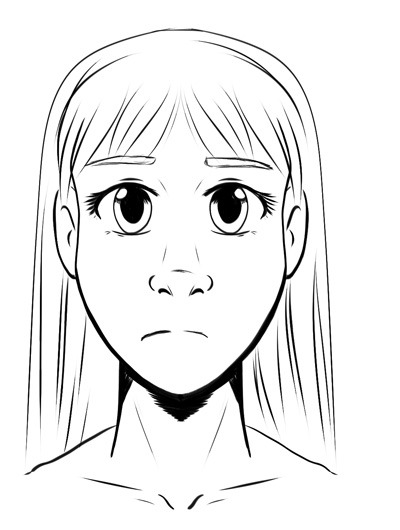 Turning the corners of the mouth down expresses sadness. 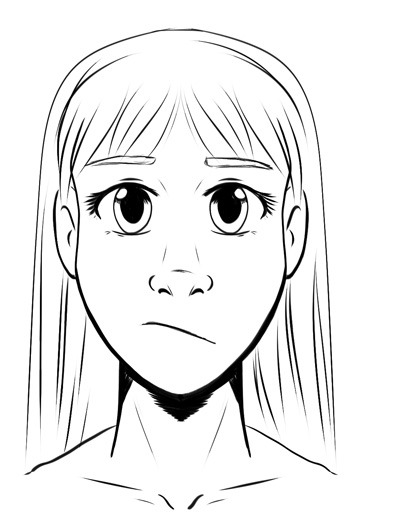 A mouth like this can express displeasure or even anger, depending on the rest of the face.

Now that we know a few basic positions for the brows and mouth, let’s look at how we can combine them to create a wider range of emotions. 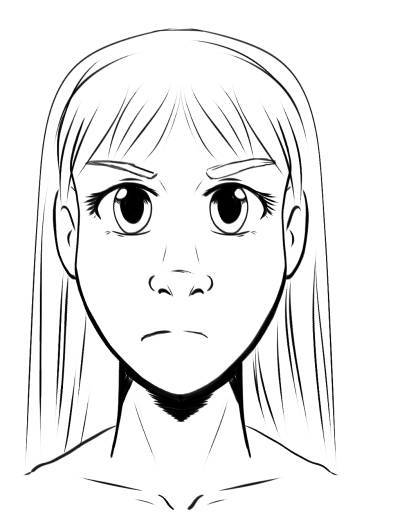 Low, turned in eyebrows with a frowning mouth makes this character look upset and angry. They are done putting up with anyone’s nonsense! 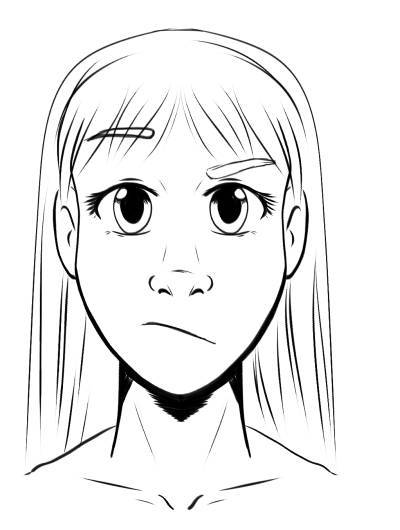 One brow up, one brow down and turned slightly in, and a funny looking mouth makes this character express confusion. 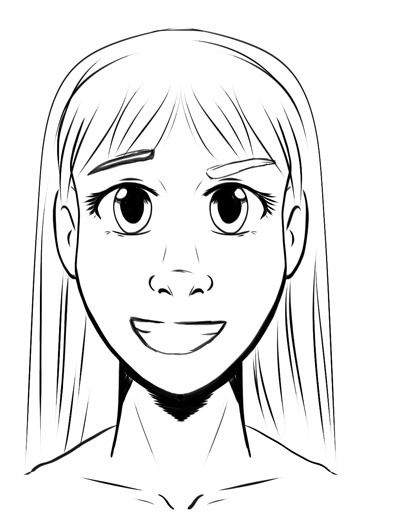 One brow turned out, one turned in, and a big toothy grin makes this character look like they’re trying to convince someone that they’re completely innocent. Maybe they’re hiding something! 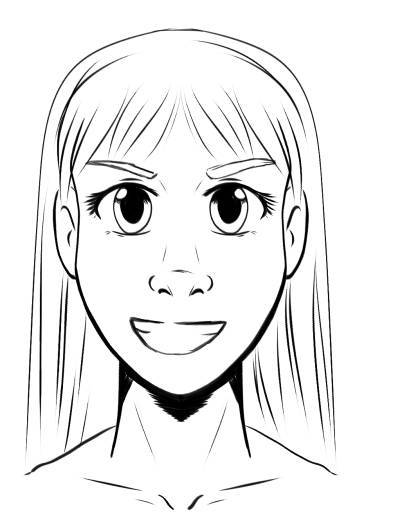 Brows turned in and pulled down close to the eyes and a big wide grin gives this character an air of confidence and determination.

When creating comics, animation, and cartoons you sometimes need to exaggerate the expression to make it “read” correctly. Remember that someone reading a comic is usually only looking at your drawing for a few seconds, so the character’s body language and facial expressions need to be understandable in just a brief moment. This is even more important for animation, where a drawing will only be visible for 1/12th to 1/30th of a second!

Once you master basic expressions, you can then push and exaggerate them to fit your personal style, the tone of your work, and your character’s personality. In the image below, I’ve drawn a variety of expressions that are either slightly or extremely exaggerated. 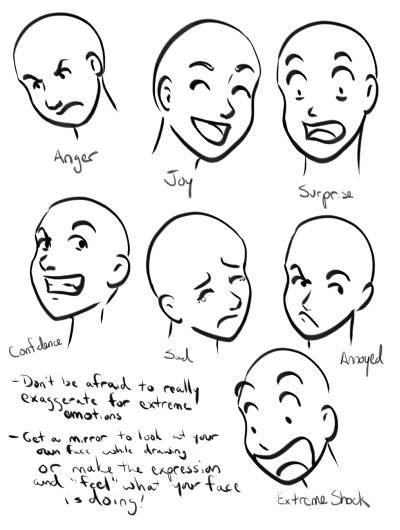 Real human faces don’t go to the extremes that are in the Surprise, Confidence, and Extreme Shock expressions, but these look good because they’re readable in an instant and it’s very clear what emotion is being displayed.

Some very exaggerated expressions would only be used in certain situations of course! The Extreme Shock expression above I’d only use for comedic effect, since it’s so out there with the eyebrows literally coming off the face and the mouth taking up the entire bottom third.

Also, lots of traditional art advice will tell you to get a mirror and use it to look at your own face when drawing expressions. That is fantastic advice and is great for most people, but I actually like to make the expression that I’m trying to draw and “feel” what my face is doing. It looks weird when I’m doing it, but I find it’s a better way to convey the expression through my art!