Give your illustrations some eye-catching movement for social media!

Moving even just a part of your illustration, such as the mouth, hair, hands, or background, can make it seem more lifelike.

In this tutorial, we'll show you how to make your characters blink with a basic technique that can be easily done by first-time animators.

For more details on animating motion, refer to the following TIPS article.

I’m going to make a simple illustration by only moving a section of it.

Here I'll explain how to make eyes blink and the eyebrows move.

I cut out the parts of the illustration that I want to move and put them in the animation folder separately from the parts I want to remain still. 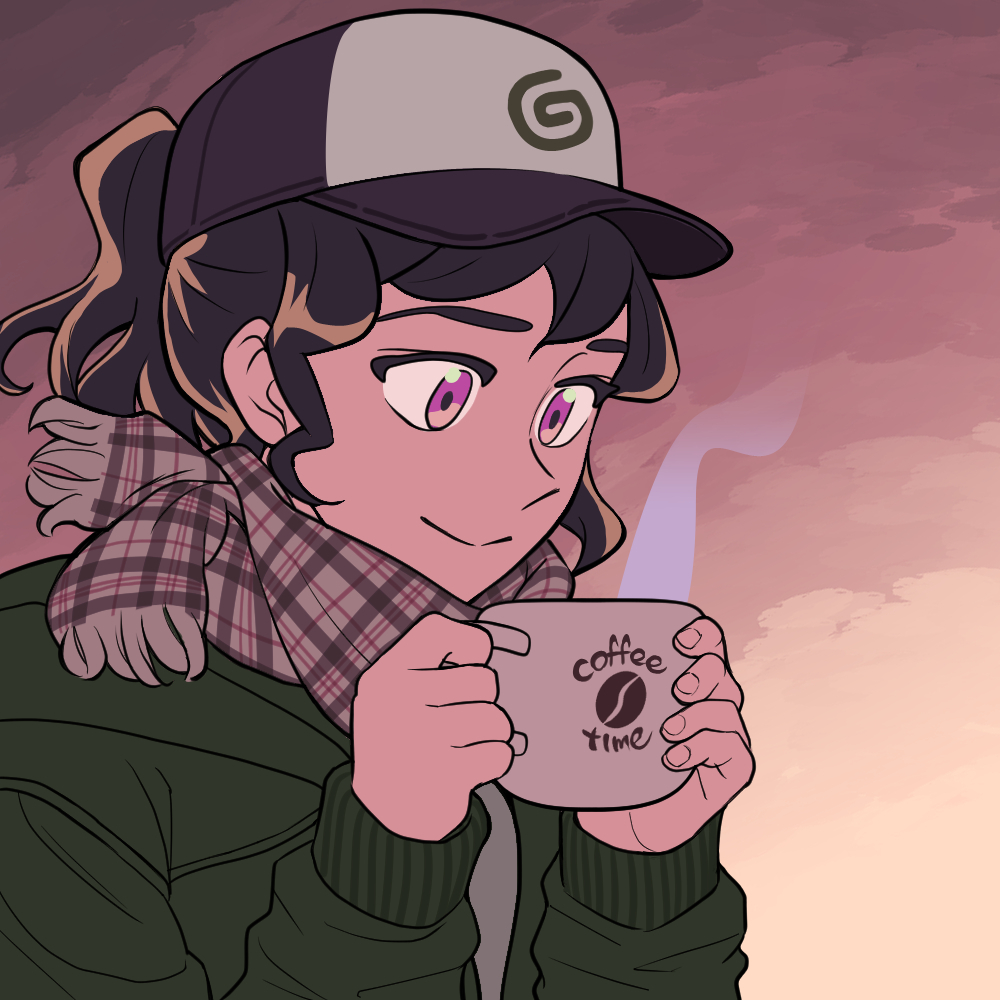 Additionally, before you start working on anything, be sure to keep a duplicate of your original illustration.

You can duplicate a file by selecting [File] > [Save Duplicate] > [.clip]. 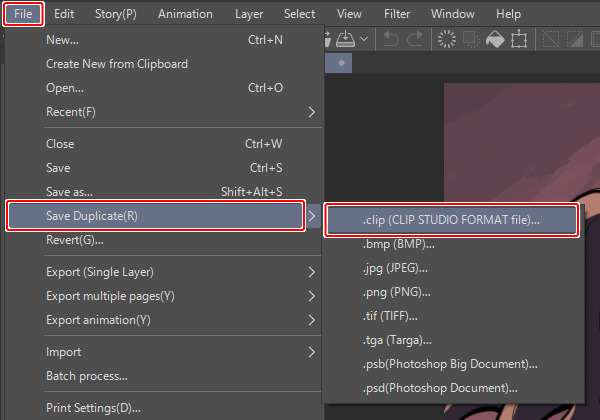 Merge your character's illustration into a single layer and only store the moving parts in the animation folder. 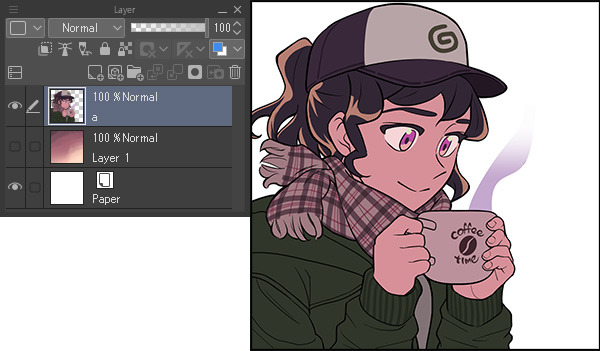 In this example, the layers are merged into a single layer, but you can merge multiple layers such as line art and color fills into a layer folder in the animation folder to create a single animation cel. 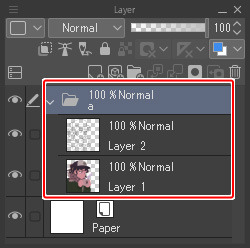 For a detailed explanation, please see the following tutorial.

(2) Click [Select] tool > [Selection Pen] sub tool and create a selection of the eyes and eyebrows. 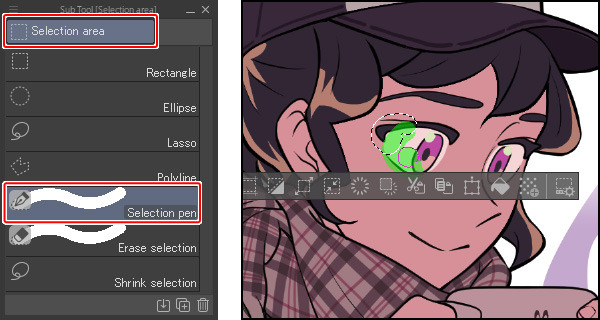 If the selection area isn't perfect, it's okay as long as it remains within the painted area of the skin.

If the eyes and eyebrows didn't overlap with any other line art, I could have used the [Polyline] sub tool, but the edges of the eyes overlap, so I used the [Selection pen] sub tool to create a more refined selection.

(3) Once selected, copy and paste the area. A layer for the eyes and eyebrows will be created in the [Layer] palette. 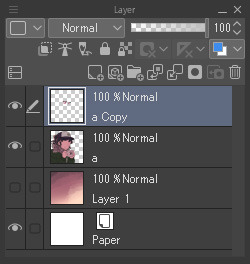 Change the name of the eyes and eyebrows layer to "1". 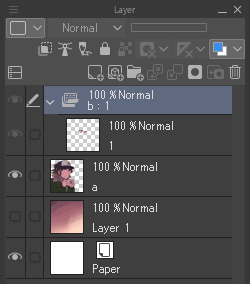 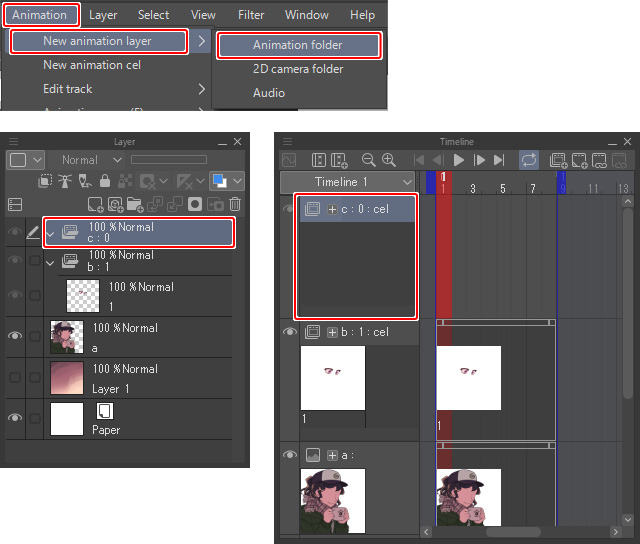 Note: Cels (frames) cannot be edited unless they are placed on the timeline. Check the timeline when you cannot edit a cel.

If you do not see anything on the Timeline palette, you will need to create a [New Timeline]. Please see below for more information.

(5) Using the [Pen] tool, color in the eyes, and eyebrows with the skin color from the original illustration.

The moving parts, eyes and eyebrows, and the rest of the parts that don't move are now divided into two folders. I named the layer that doesn't move," a," and the animation folder for the eyes and eyebrows that I want to move, "b." 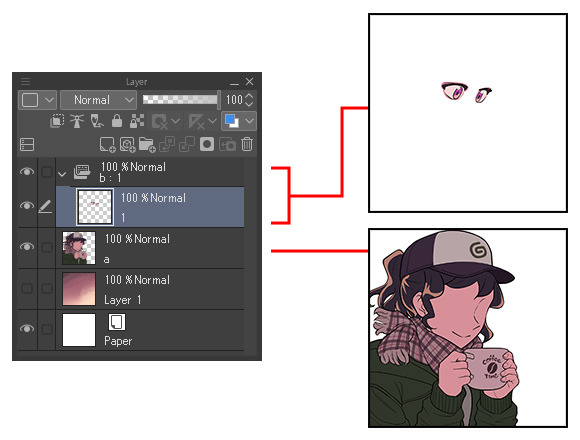 (1) Add two layers in the "b" folder. You should now have three layers. Each should look like the following: 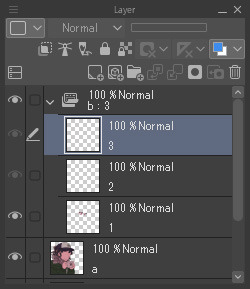 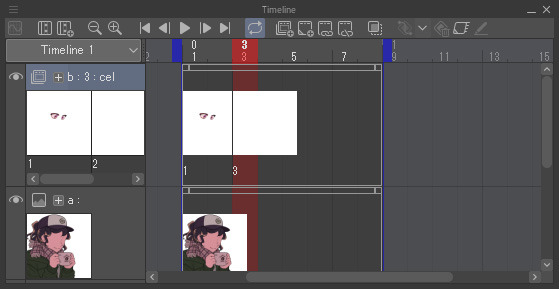 (3) Enable onion skin from [Animation] menu > [Show animation cels] > [Enable onion skin]. Draw the eye closed on Layer 3 while referencing Layer 1. Try to imagine the motion of the eyelid and pay attention to the width and volume of the closed eye. 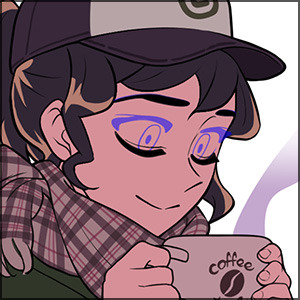 Draw near the bottom of the open eye. If it’s too high, the closing motion will look strange.

(4) The eyebrows should be nearly identical to Layer 1 but slightly lowered. 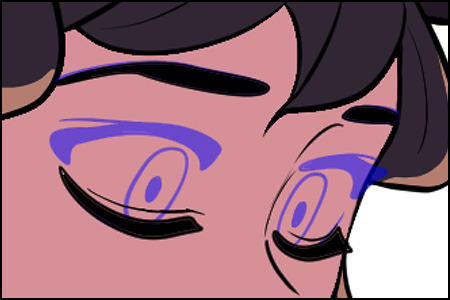 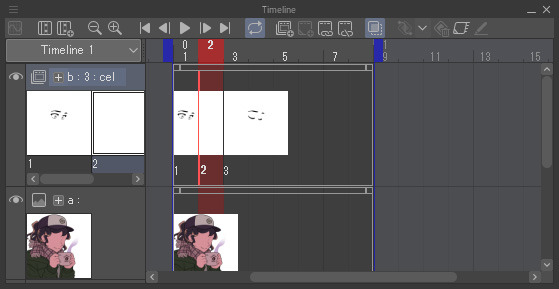 (2) Draw the inbetween of the open and closed eye on Layer 2. Do this while referencing Layers 1 and 3 by displaying their onion skins. 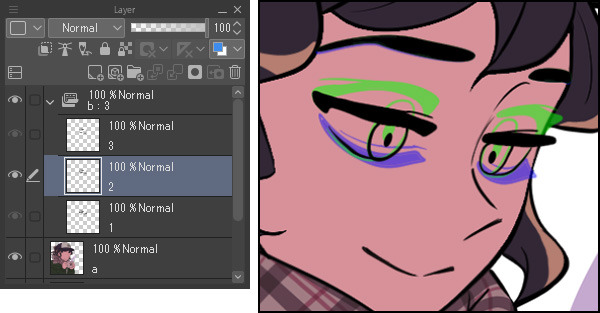 (3) Connect the edges of the eyelid of 1 and 3 with motion arcs. Here, we placed the inbetween on the upper half of the arc to accentuate the motion. This slow-in/slow-out makes the motion more realistic.

A motion arc is a line that indicates the trajectory of a motion. An arc contains dots that specify frames.


(4) Carefully draw the inbetween eyelashes while referencing the onion skins and arc. Be careful of overlapping sections. 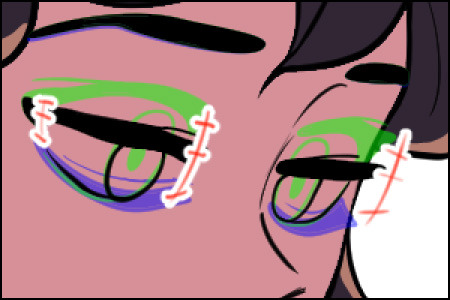 (5) The inbetweened irises should be pulled downward by the eyelids. 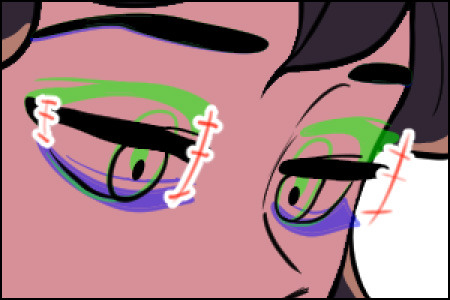 (1) Right-click any frame on the [Timeline] palette, and specify cels on the timeline from the pop-up menu. The frames of the motionless folder “a” should all be 1. 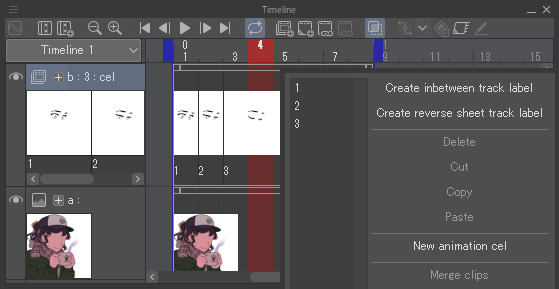 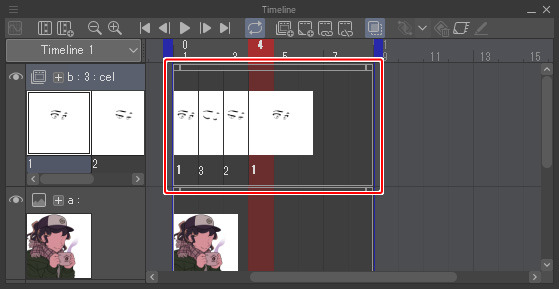 The first two frames were set to 1 (open) > 3 (closed) without an inbetween to simulate a blink.

When opening, the frames were set to 3 (closed) > 2 (inbetween) > 1 (open). This makes the opening motion slower than the closing motion.

(3) Finish by clicking the [Timeline] palette’s [Play/Stop] and checking the motion. 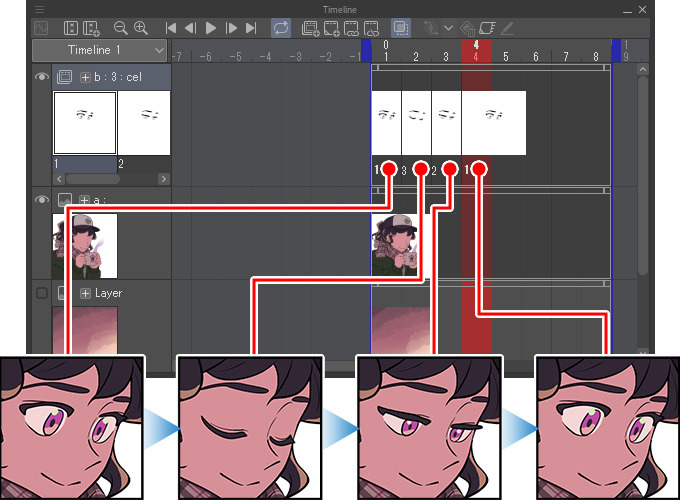 In the same way, you can add motion to the steam in another animation folder and paint each cel to complete.

Completed works can be exported as animated GIFs and posted to social media (Twitter, etc.).

From the [File] menu, click [Export animation], then [Animated GIF] to export the animation as an animated GIF.

Let’s go over “The bouncing ball” as well, another exercise that’s often introduced alongside the blink as an entry-level animation.

When animating, drawing cels in chronological order is called “Straight ahead action.” This method can be used for simple animation that does not need keyframes. Animating simple shapes with straight-ahead action is useful when practicing the movement of objects.

(1) Draw a ball on the bottom layer. Each ball will be drawn on the following cel.

We are assuming the ball will bounce, as shown below.

(4) The finished animation is a ball that bounces, as shown below. 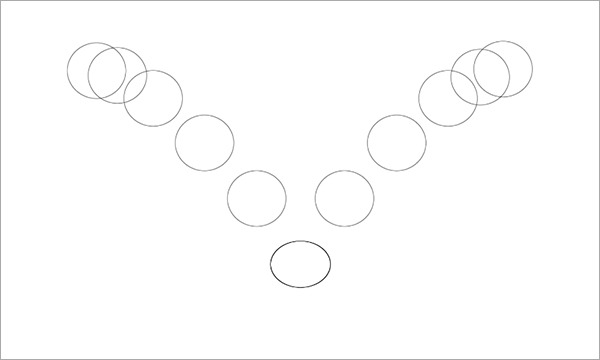 The deceleration at the top of the arc and the acceleration as it falls and bounces is shown using slow-ins/slow-outs. The squash at the bottom is important as well.

Quick animations like this can be made swiftly and will help you get used to the software. Please try it out.

How to create moving illustrations #1 by ClipStudioOfficial