Hello everyone! My name Bio and today I’m going to do a beginners tutorial to introduce you to the basics of character design.I’ll also give you some of my personal tips I use in Clip Studio. Feel free to apply these tips to your art, and let’s start!

Attention: My interface was modified as it’s easier for me to work this way, you can modify it too using this CSP workspace asset.


First we create our canvas. This one is (3000 x 2000px) 300dpi, However you can use any size you want. You’ll be able to change the size afterwards in Edit > Change Canvas size.

The brush I use to sketch is the basic CSP Darker pencil brush with low stability, this way its lets my lines flow easily. 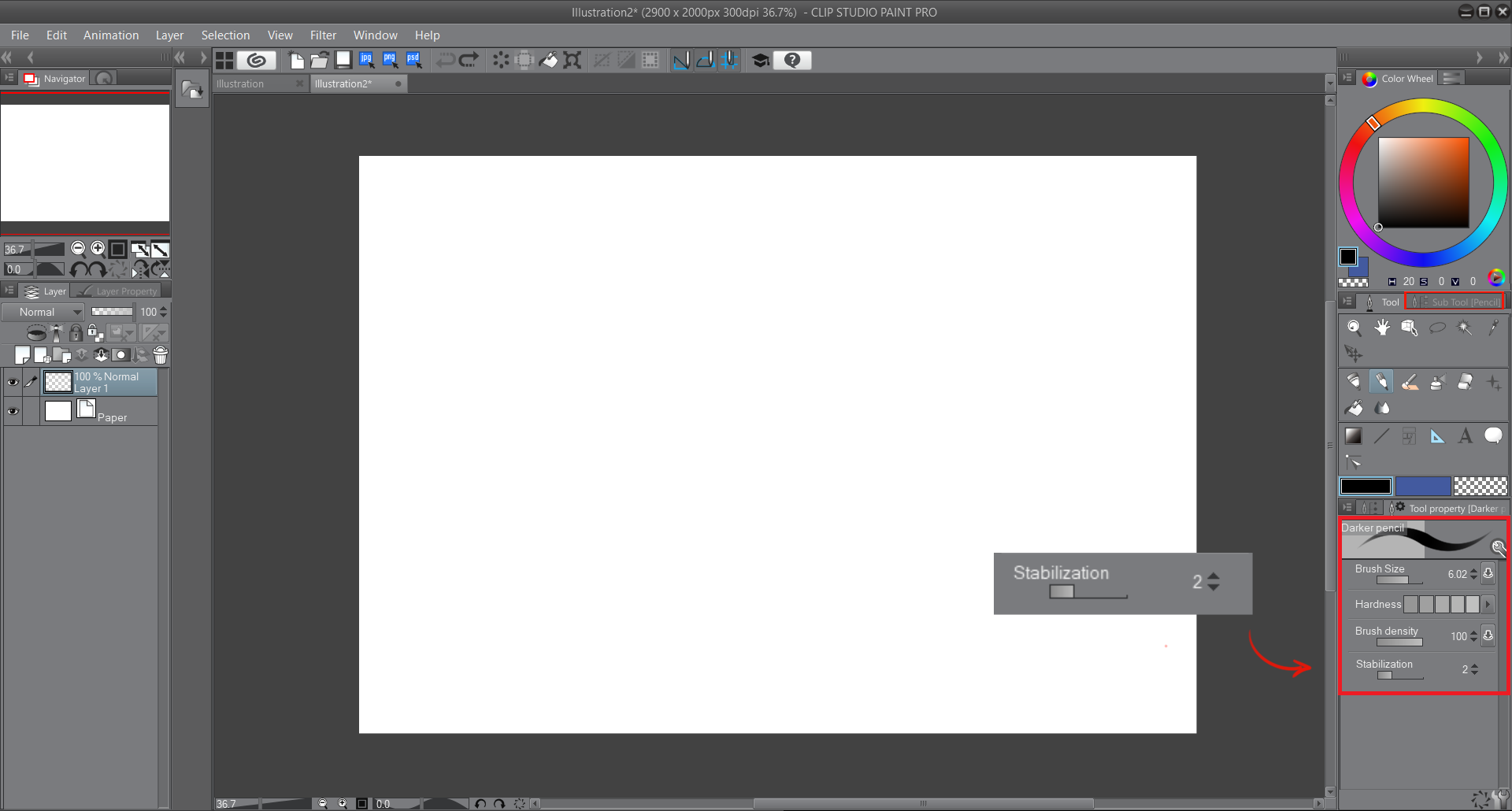 When talking about character design we are often thinking about shapes. In a general sense and in a lot of cases, you are able to recognize characters just by their shape without even seeing their face.
In this example I’ve drawn different characters with a variety of body shapes so you can easily see the possibilities and the combinations you can draw! 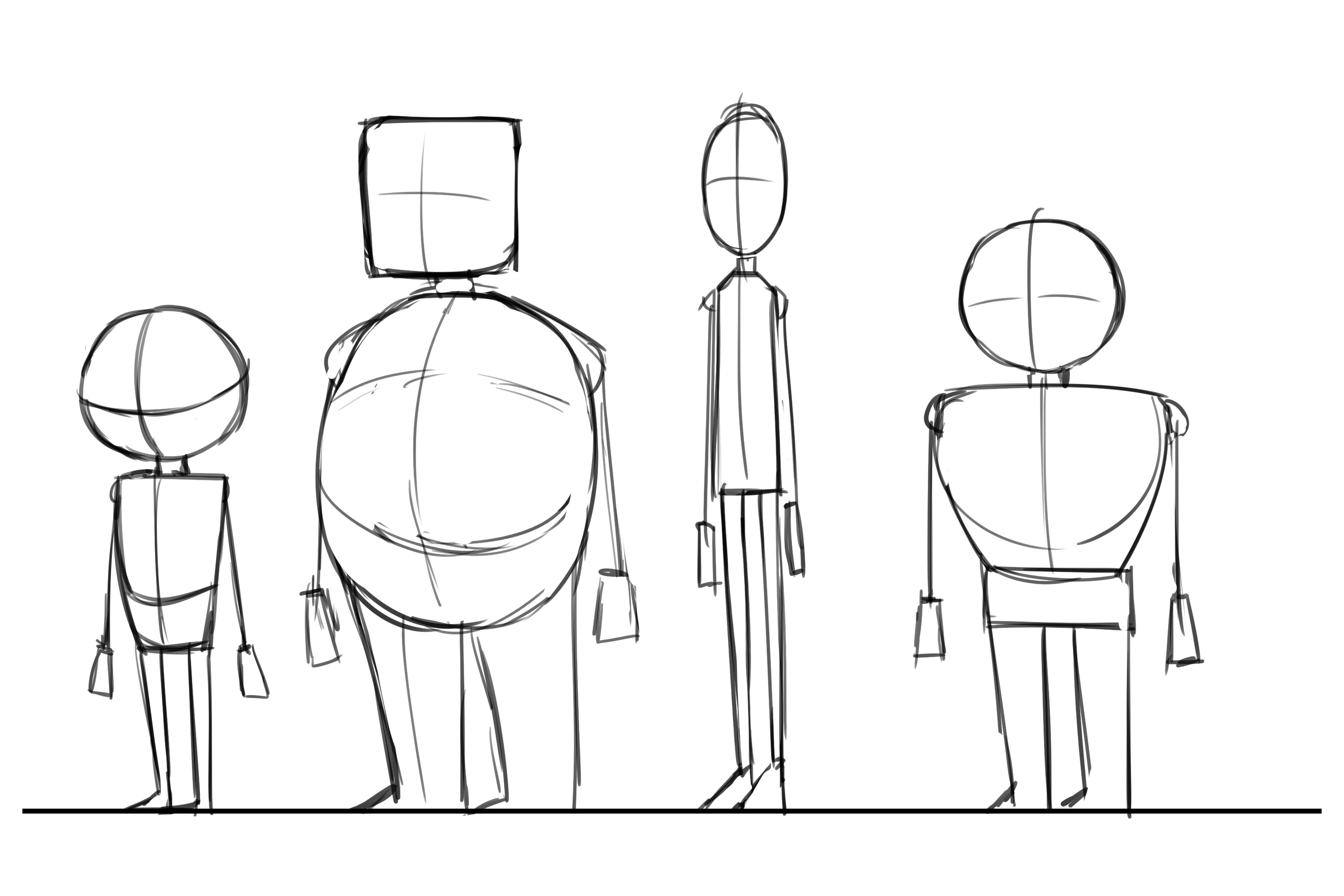 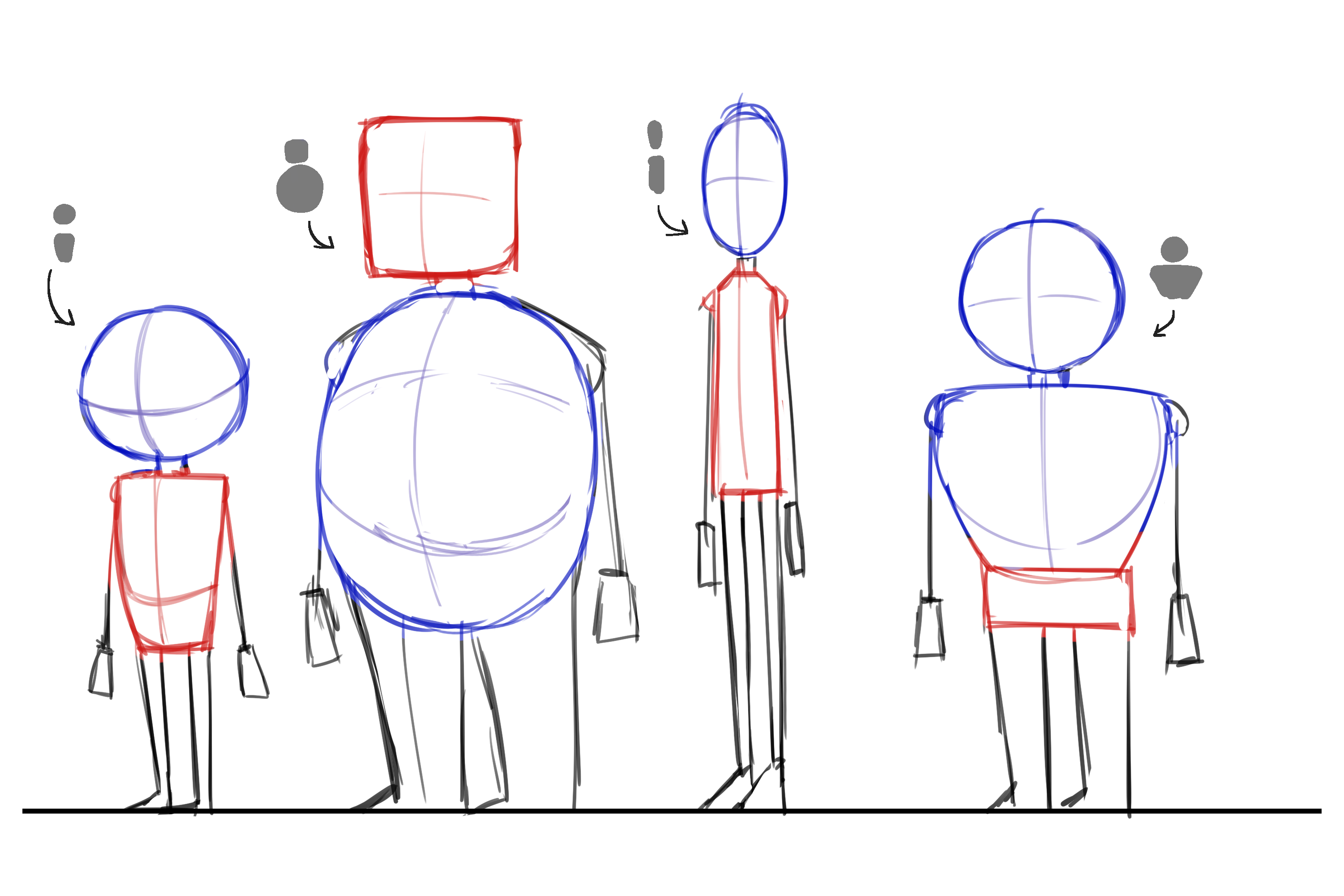 If you want more precise shapes you can always use the selection tool, Clip Studio has a rectangle and circle shape subtool that can help you (press Shift for the shape to be 1:1 ratio.) 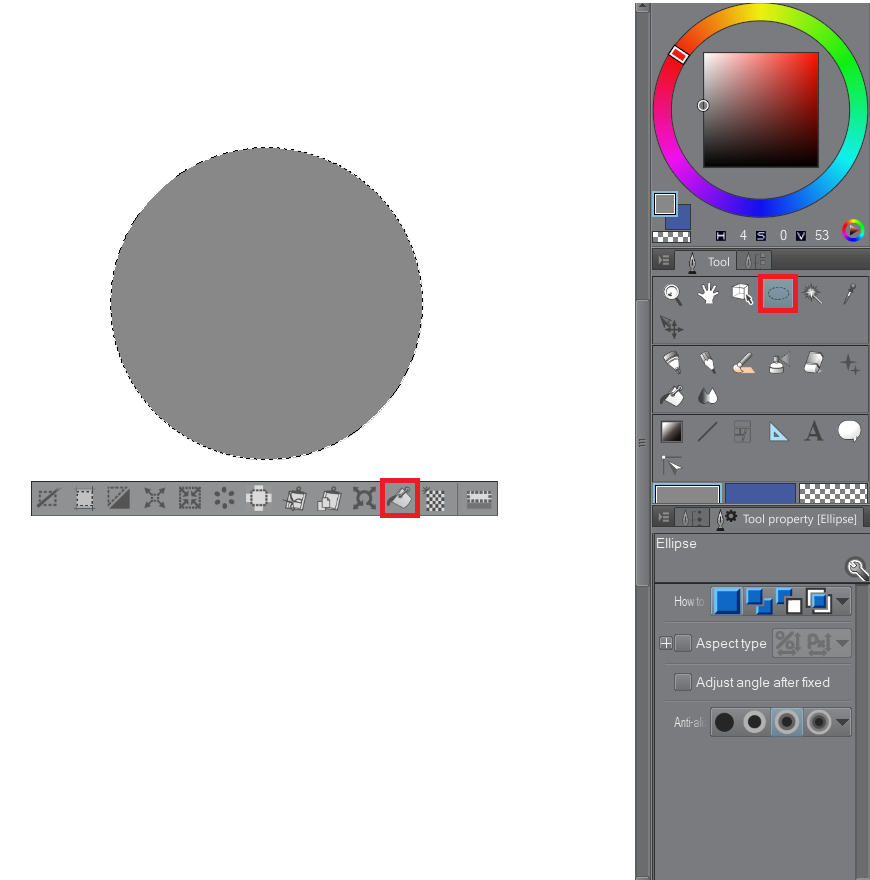 
The head and face is also a factor that can show the personality of the character, especially the eye shape, the hair and the eyebrows. 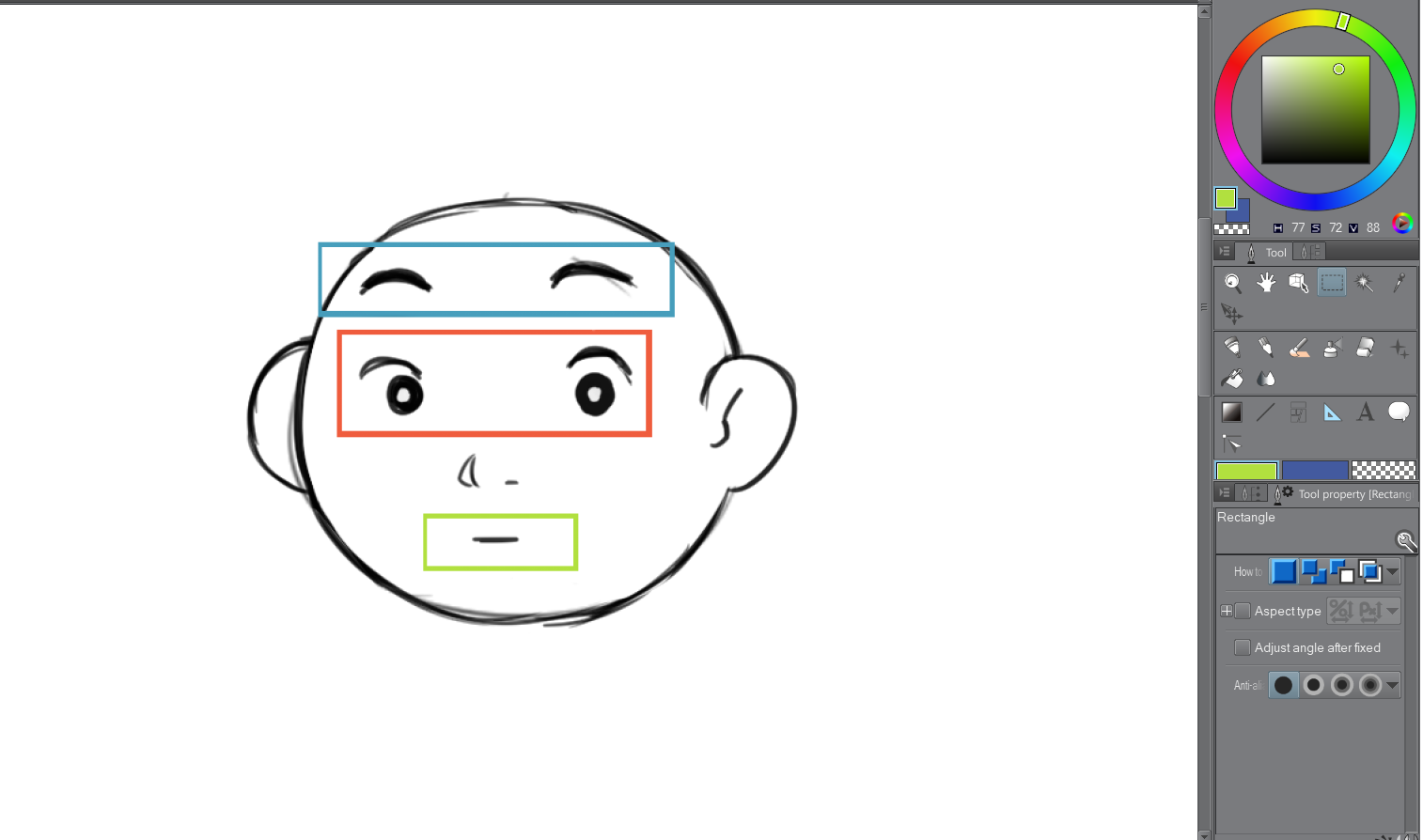 But don’t forget the face shape can vary too!

As more and more animated shows and series come out, some features are automatically linked to certain personalities. For example, if a certain character from a series is kinda famous, it can create a connection with a certain feature that applies to a certain characteristic, and can form a sort of trend among creators. 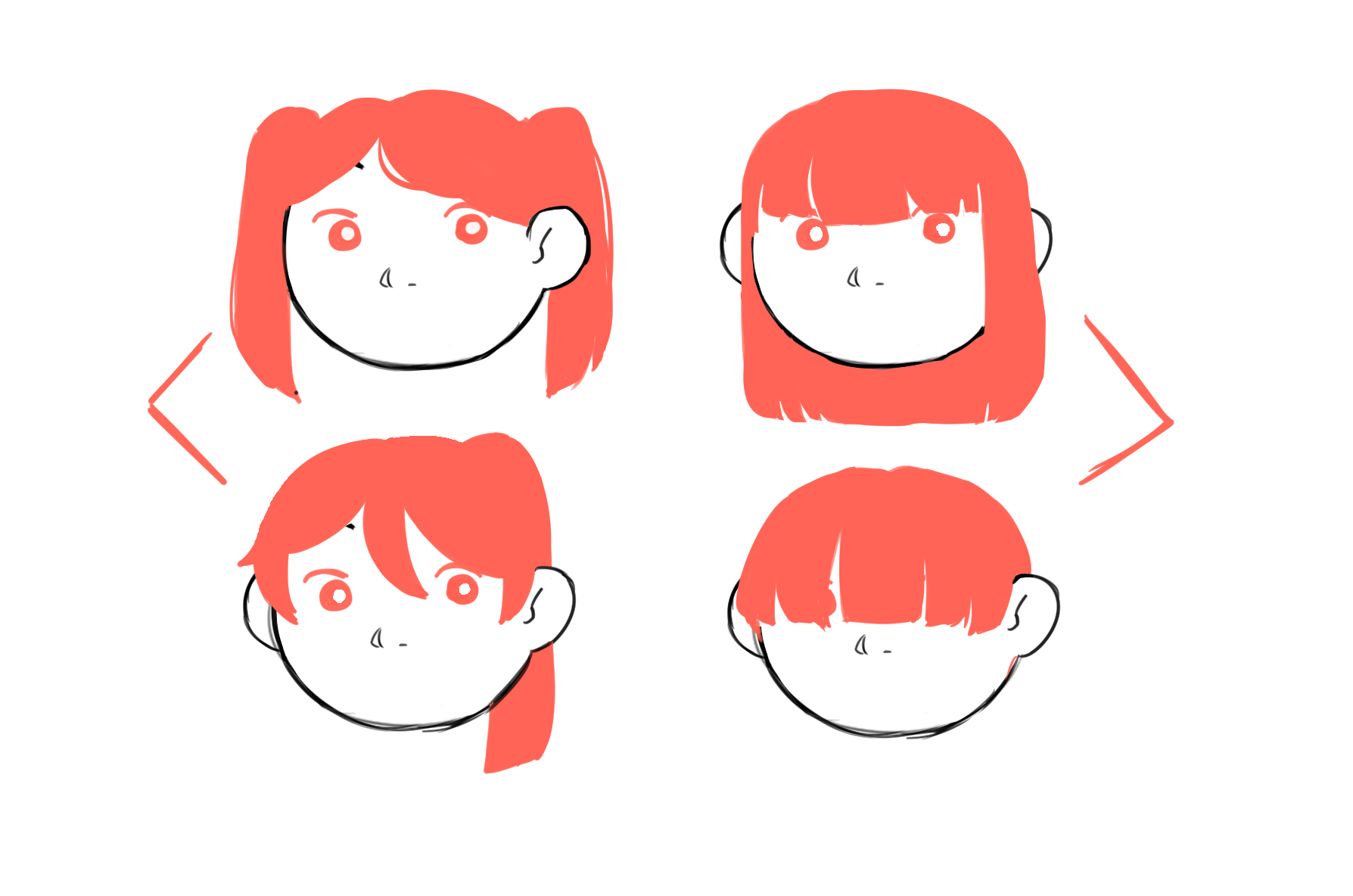 Talking about hairstyles for example, a girl wearing pigtails/ponytails is usually seen energetic and athletic, while a girl whose hair fringe almost covers her eyes, is seen as mysterious and quiet. Of course this doesn’t apply to everyone, but it’s a point that can be taken in mind and it’s interesting if we think about it.

I used the same face base for this example to show you how different a character can look just by making slight changes to their face. When designing, we can keep these tips in mind so the viewer knows what to expect when looking at the overall design of your original character. On the other hand, it’s also fun to mix different factors and create a personality that doesn’t match with the person’s face at all, it’s up to you how you want your viewers to read your characters!


NOTE: The brush used for the lineart is the basic CSP Oil paint brush, modified so it looks like a pen brush. This time I added more stability so the lines are clearer and precise. 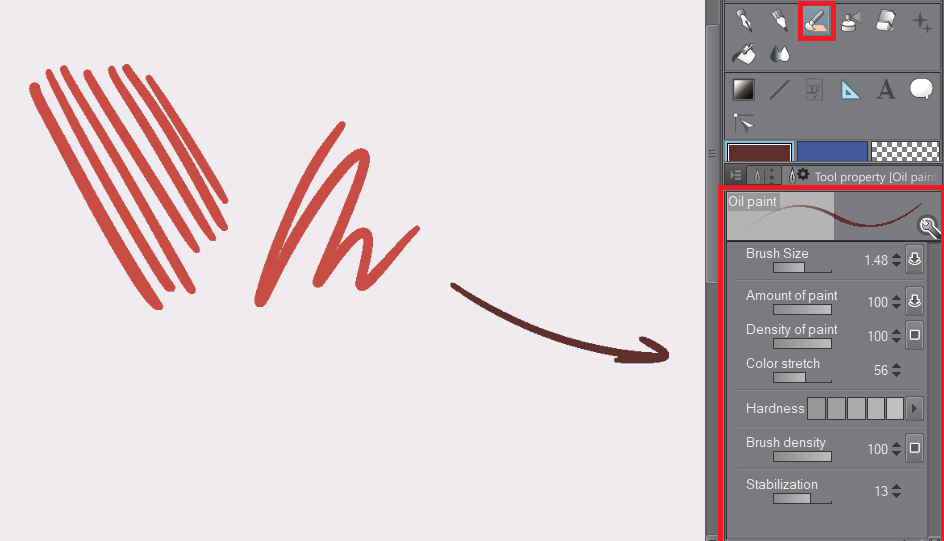 
The pose you draw your character in determines who you want them to be read as. This is important when making your character reference sheet. This usually contains a turn around to show all the details of the design in different views, and then one or more poses that can express the personality of your character.

Remember that if the character sheet is for personal purposes there are many ways to design it! However when another person has to work with your sheet, it’s preferable to draw as many references as possible so they get a better idea of the character! Here it’s an example of a simple character sheet. 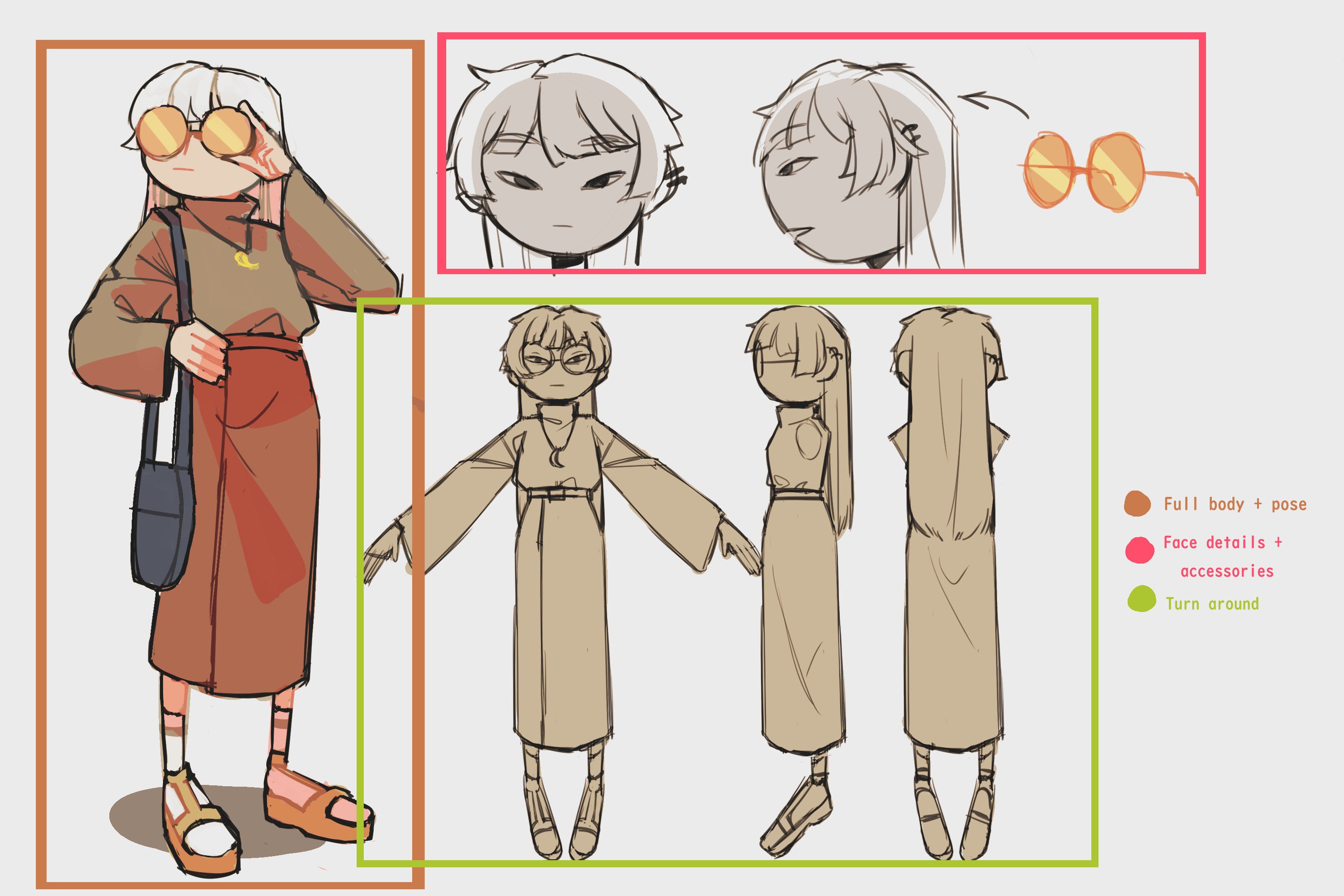 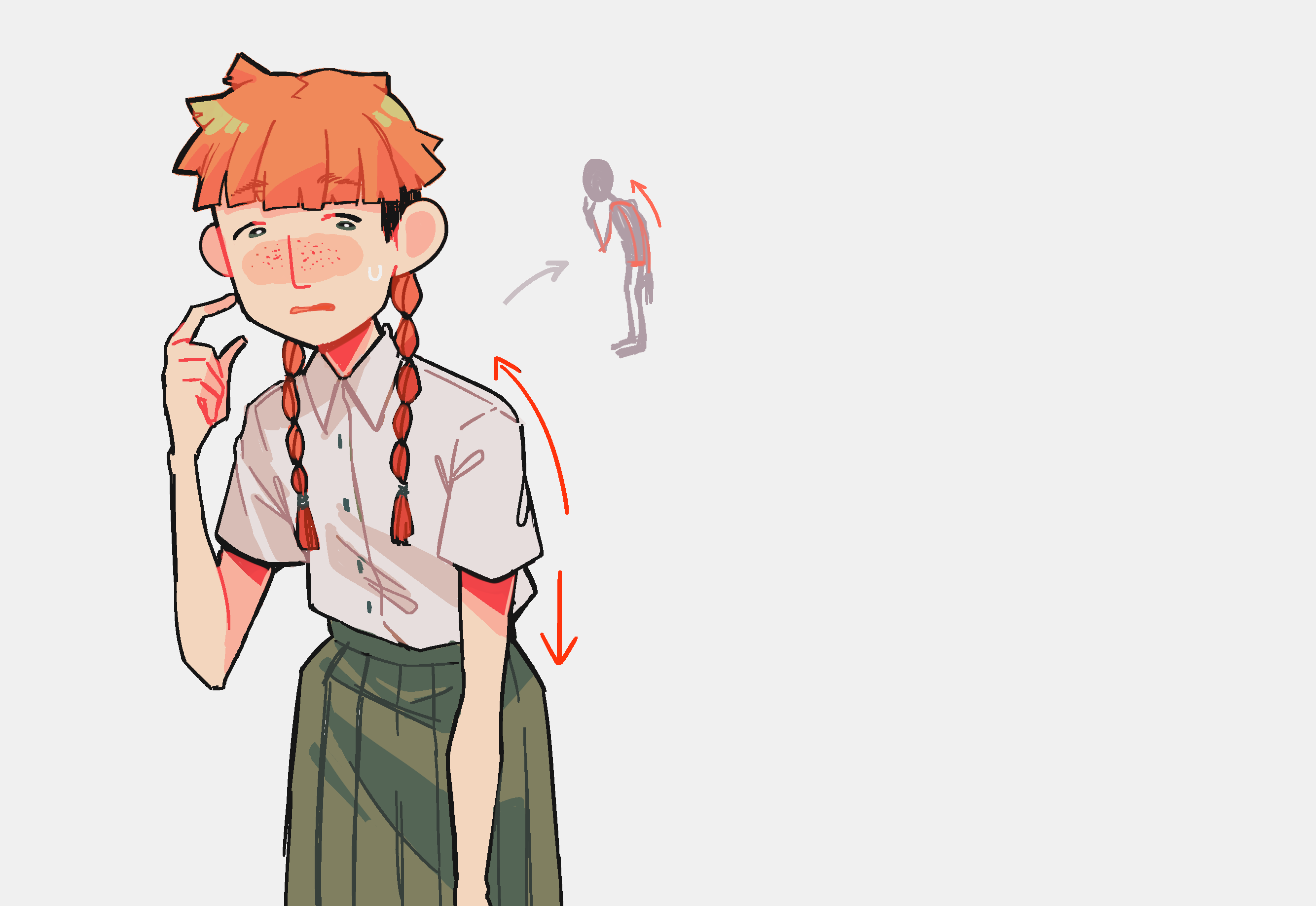 Here I’ve drawn more examples to show what I’m talking about. It’s the same person but each of them radiates a different energy. On the left, the tired character usually stands in a way that shows they’re tired and uncomfortable, focused on the back (bent down) and arm positions (shoulders down, not doing any gesture with them 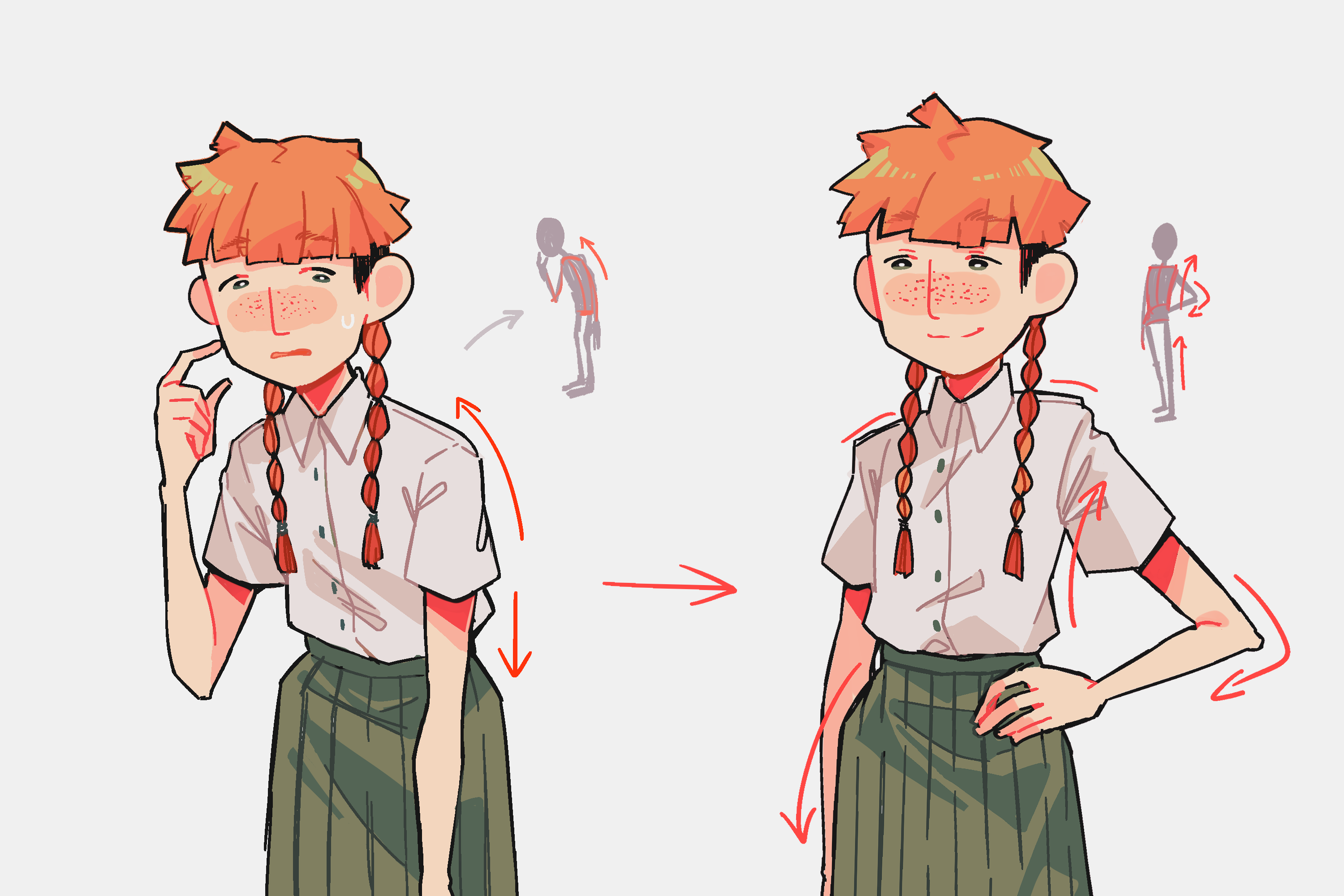 Then on the right part I’ve drawn the same character but with a pose that shows confidence and determination. Just by straightening their back and placing a hand on their hip, the way you read a character can change completely. We will use this tip to show what the character we create is expected to offer in the future. 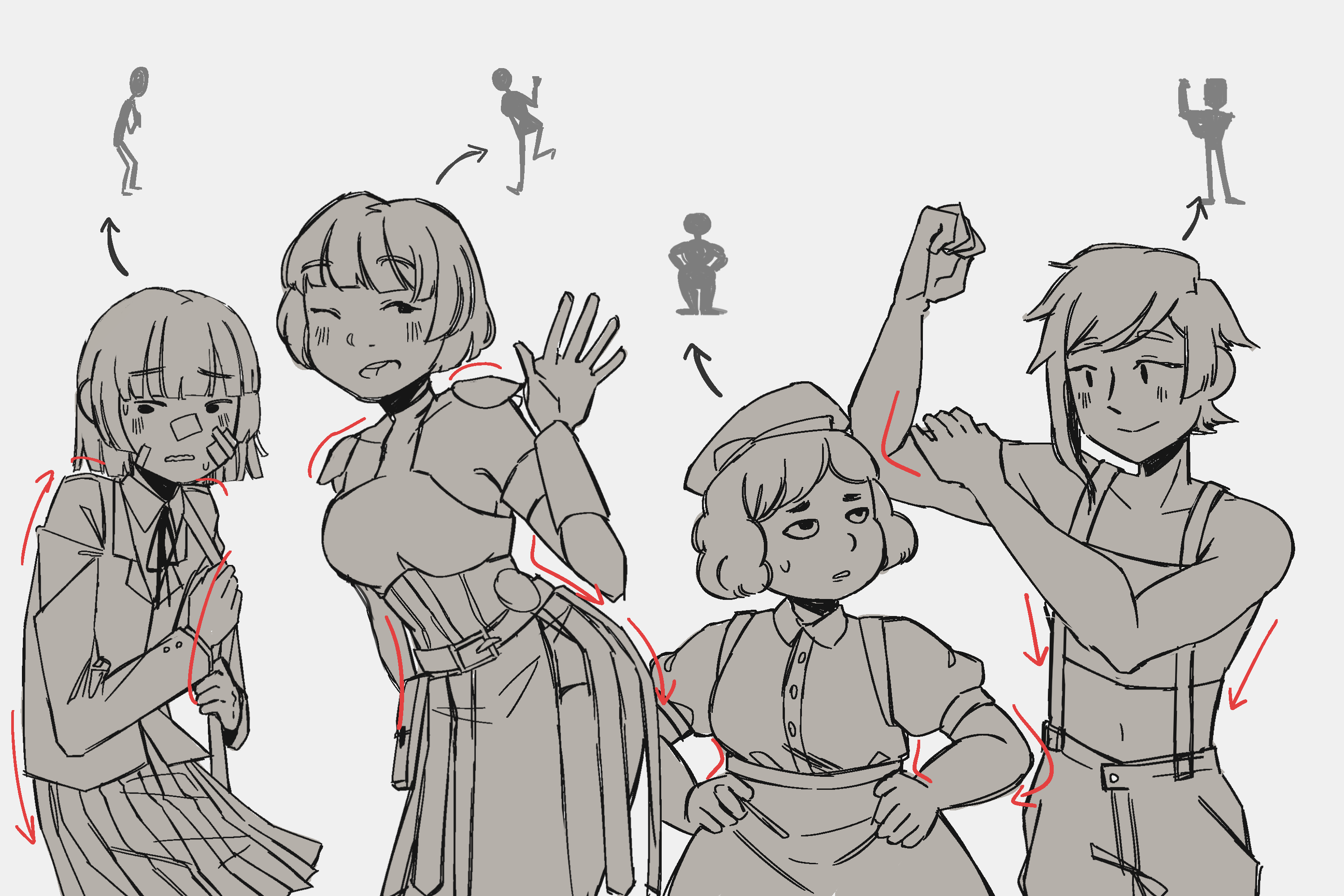 There are many ways to depict a personality, just have fun with it while you do it!

In this part I will give you some additional information that can help you develop the characteristics you want to create.
The acting of the character is linked in a certain way to the pose and their personality, but what we are talking about now is the way your characters acts and how they show it, facial expressions and hand gestures included. For this part, it’s nice to have references of real people (from movies, series, or even yourself!) to help you with this part.
This is mostly an important step on character sheets for animated movies, but personally I think practising some acting on your character also helps to depict their personality and their reactions to certain events.

Here’s an example of one of my original characters doing some acting. 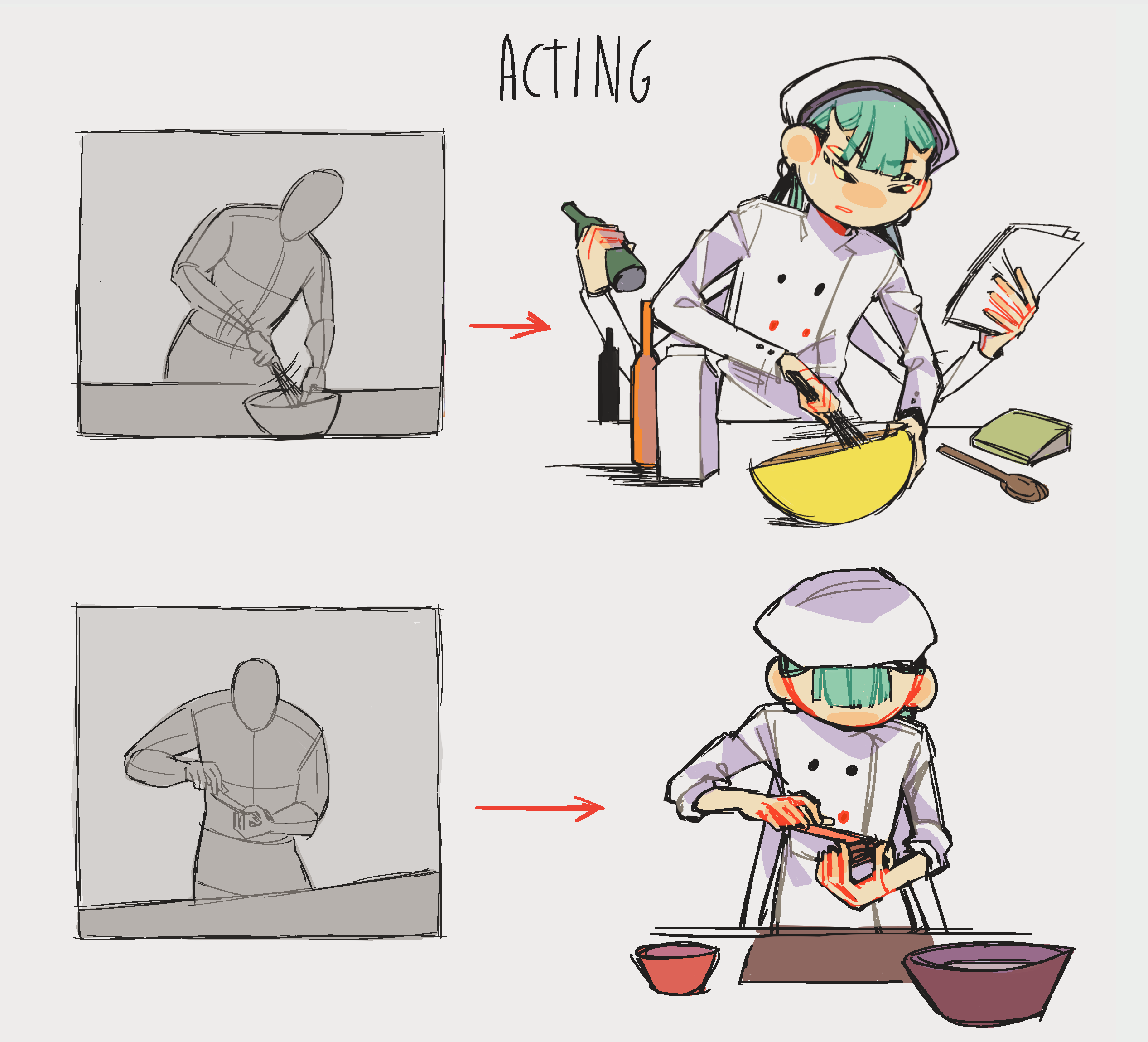 In this case since my character is a professional chef, I decided that watching cooking shows would help to reference her acting!

Here, moodboards are an accessory. You’re not forced to do these but they certainly help you with character development. A moodboard will show different pictures that can be linked to your creation, or you can say they’re a kind of summary at first glance! 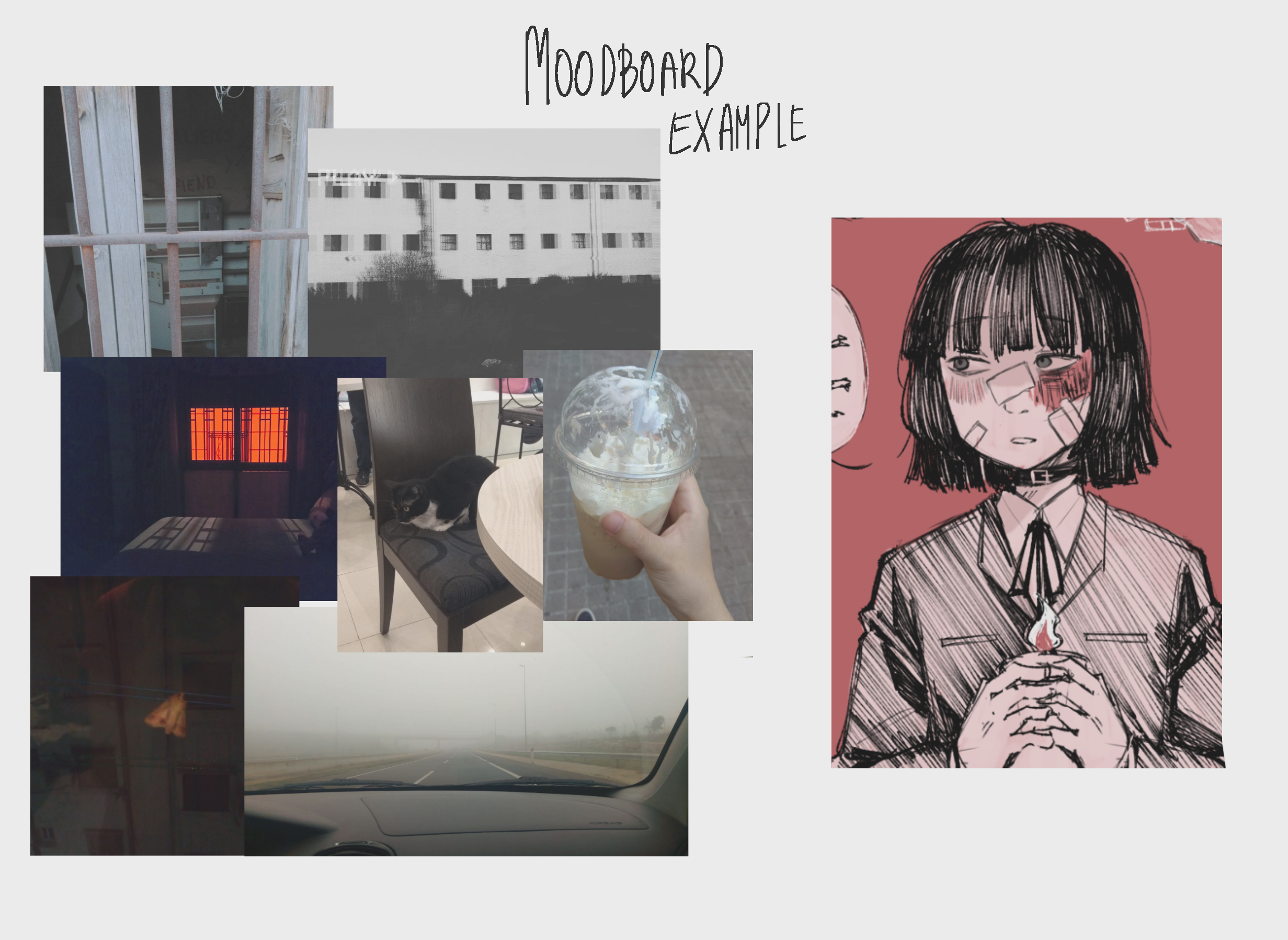 This would be a simple moodboard of another character, using photographs I took.

With this I’ve shown you the bases of character design, there are a lot of other different and fun ways to create an original character, I’ve just guided you a bit, now it’s your turn!

-Where to find me?

Here's a link to my Twitter in case you want to see more of my work!