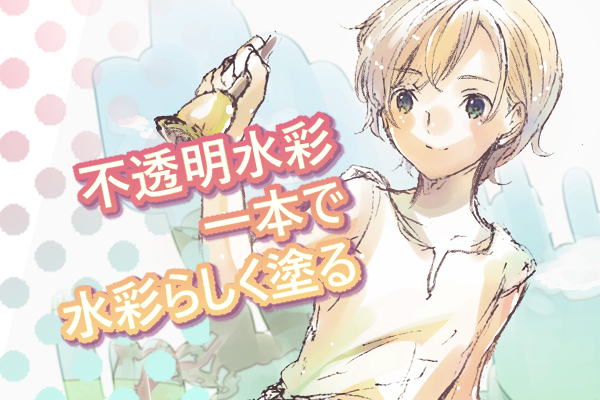 This time, I use an analog line drawing drawn with a pencil.
First, capture a photo of an illustration that will be a line drawing on a smartphone etc. 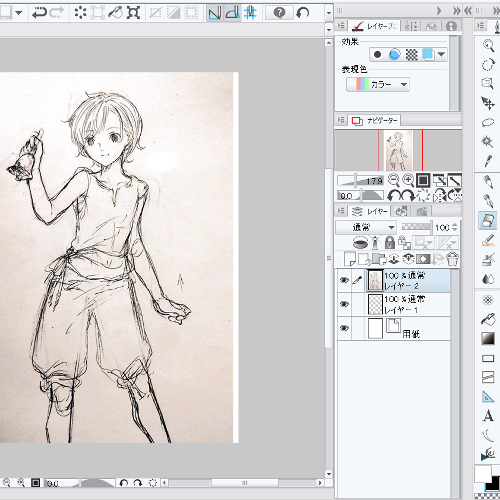 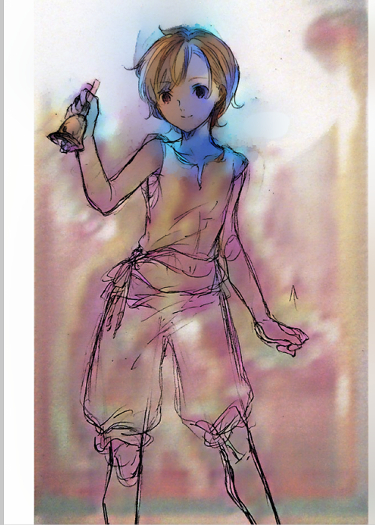 We will hide the fully automatic coloring layer and adjust the line drawing.
Make the line clearer by adjusting the brightness and contrast.
It will be difficult if the background color remains, so at this time, keep the line drawing bright enough to fly a little.
Because the person who finished the correction is more beautiful than erasing, I will adjust more and more. 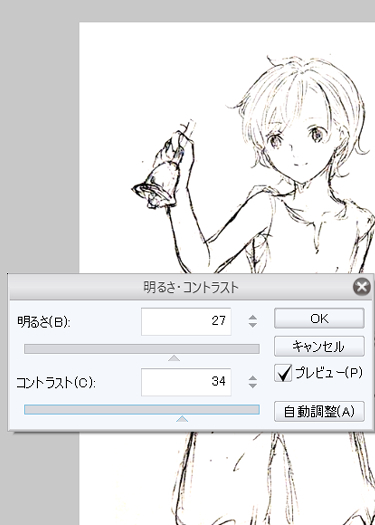 And convert the brightness to transparency to make the white part transparent.
Next, we will correct the missing line drawing with a real pencil. 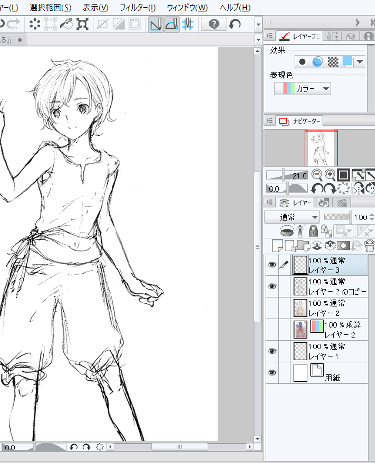 Prepare to color the person

This time, we do not subtract each part, but take a person as one part and paint it. To do this, create a mask that prevents the paint from sticking out of the person.

Use the automatic selection tool to select places other than people. There is no need to make a nice selection at this point.
And make a quick mask from the selection range. 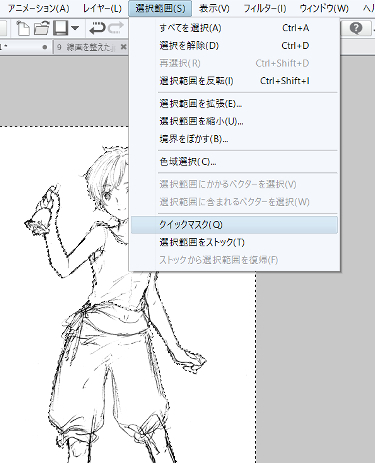 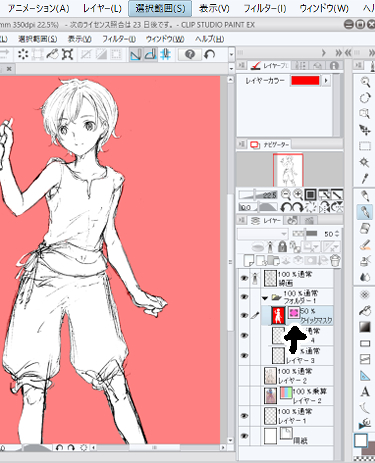 If you can fix it neatly, press pink on the image from the quick mask to make a selection.
Since the part other than the person is selected, the selected area is reversed and masked to the person's color fill folder. 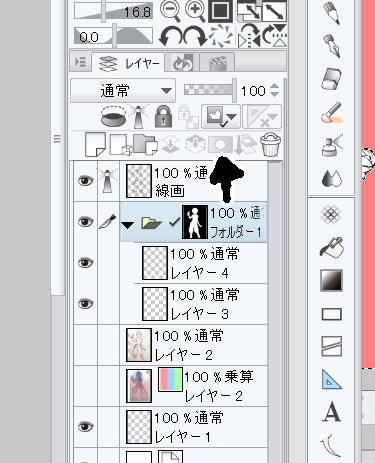 If it is in the folder which I masked by this, the color did not go out of the person. (To mask each folder, press the ↑ button while selecting a folder.)

Create a layer and color in the folder you created earlier.
From here onwards, I will use all opaque watercolors except the highlights and the priming.

The opaque watercolor brush settings used this time are as follows. When using this brush setting, it is easy to use with a reduced pressure. 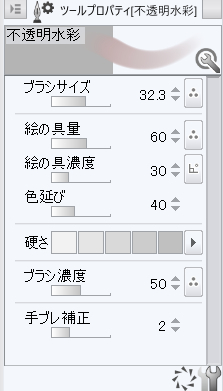 First of all we will paint the skin.
I will paint to leave the white, conscious of the part that will be the light. Because it tastes like watercolor even if it slightly sticks out, you do not have to worry. 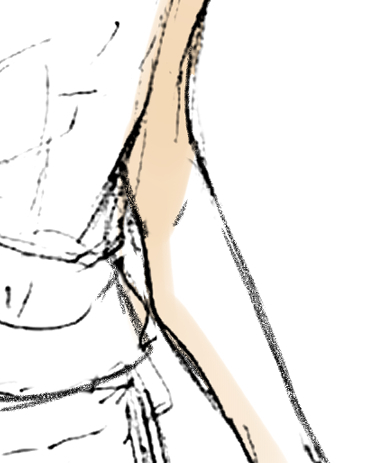 If you think the color is too dark, select a transparent color and dilute it a bit with opaque watercolors. Because pressure is strongly sensed, it will be smoother than erasing with the eraser. 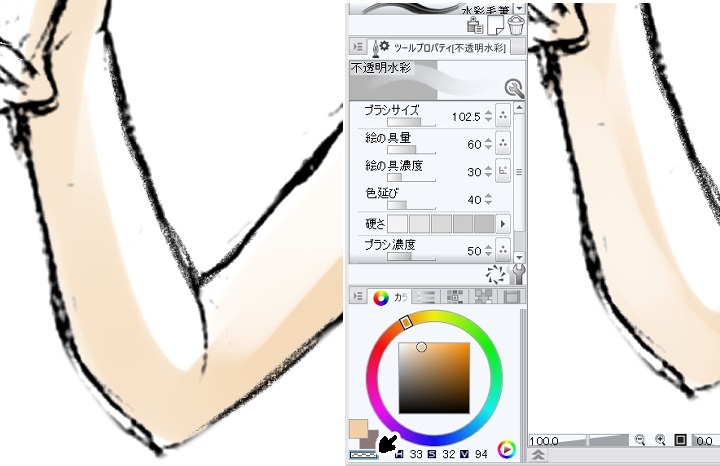 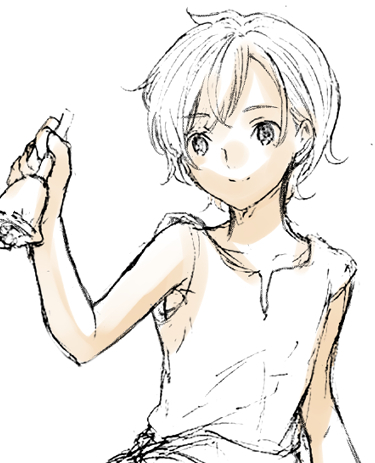 The opaque watercolors can be painted with a single color as the density changes greatly depending on the pressure. However, I will add color since it is a little bland.
In addition, since opaque watercolors strongly reflect the color applied to the background, light pink and reddish are added to express reddish orange. 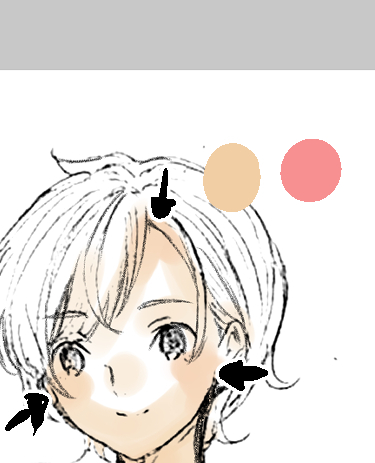 The color of the background (left) was reflected in the pink (right) opaque watercolor and the redness familiar to the skin was expressed.

Next I will paint my hair. I am planning to be a blonde this time, but I will continue to add color so that this is not monotonous.
I decided to add a blue color this time. 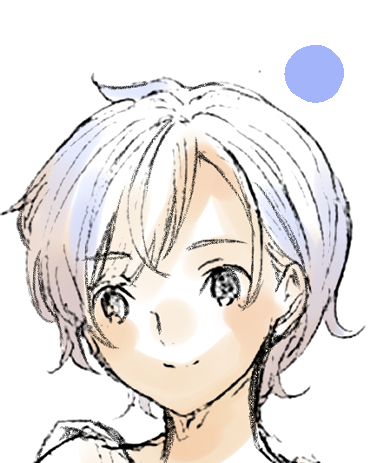 Earlier, I increased the ease of reflecting the color of the background as a feature of the opaque watercolor, but be careful when painting opposite colors, such as a blonde with blue on the background.
This time the main color is yellow, so I would like to express a color closer to yellow than blue.
In other words, I want to strongly reflect the drawing color of the brush. In such a case, you can make the current drawing color reflect strongly by moving the cursor from the transparent part to the direction already drawn. 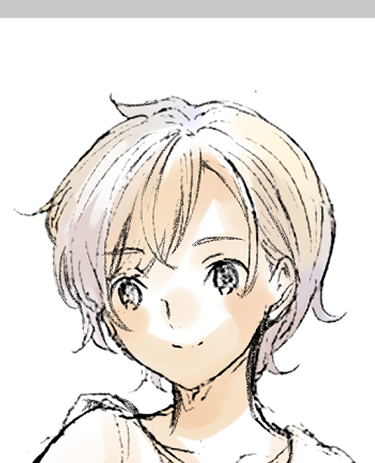 In addition, since the color was riding on the whole and it became a heavy impression, I adjusted the place where I want to be addicted with an eraser, and the place I wanted to thin gently with a transparent opaque watercolor.

Next I will paint my clothes. As before, I use one or more color parts to paint. 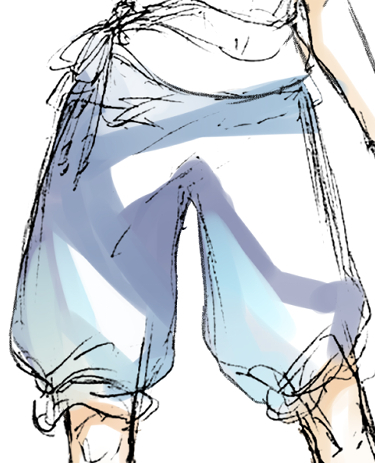 The previous hair was not so hazy because it was similar to skin, but the skin color and light blue were mixed and the color became hazy. In such a case, you can make a beautiful color by creating a layer on top and drawing it there. Then it is as it is by integrating the two sheets. 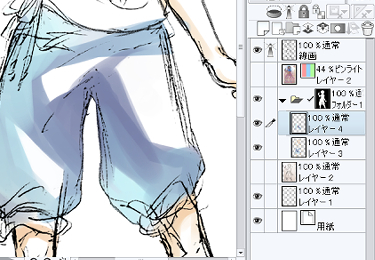 I painted it so far, but I want to change the color of my pants, so I adjust it.

Since the layer you've painted up to now is not a single layer, use the lasso selection tool to select the area where you want to change the color, and perform color correction. Because I want to try various colors, I changed the color in the tone correction layer.
Making a selection and then making a tonal correction layer will mask that layer.

I painted the upper body in the same way, so I will add a watercolor border from now on.
Select and set the watercolor border from the layer property.
The higher the transparency effect, the darker the border; the higher the lightness effect, the stronger the black. When the blur width is increased, dullness is likely to occur, so the value was made smaller. In addition, we set the value of around 30 for both transparency and lightness effects this time. 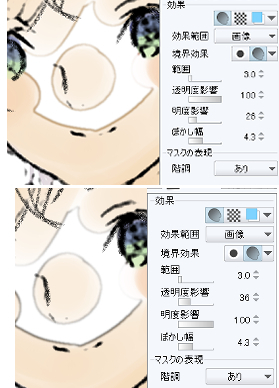 If you find that there is a part of the area where you feel that you don't need the border, you can prevent the watercolor border from being generated by thinning the border with a low density transparent airbrush.

Next, we will add the highlight. Speaking of highlights, the additive layer is the mainstream, but I will draw on the normal layer to avoid jaggies. The whiteness of watercolor comes out by making a dot on the edge and making a pool at the end. 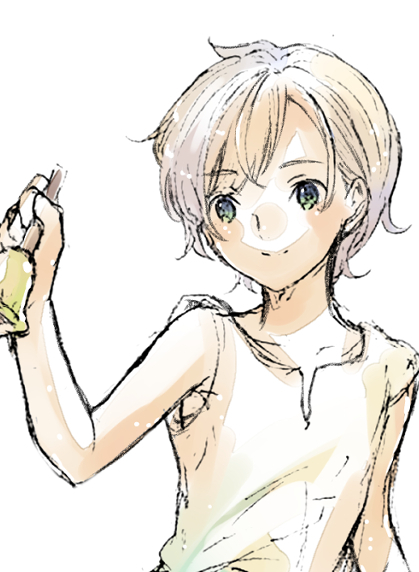 Now that you're done painting people, let's clip the auto-colored layer we created first to the human-painted layer with a low density and linear light. This brings out uneven color, increases the number of colors, and allows you to incorporate the textures of the fully automatic coloring layer.
Also, although this is a linear light, it may be better to combine with another effect. 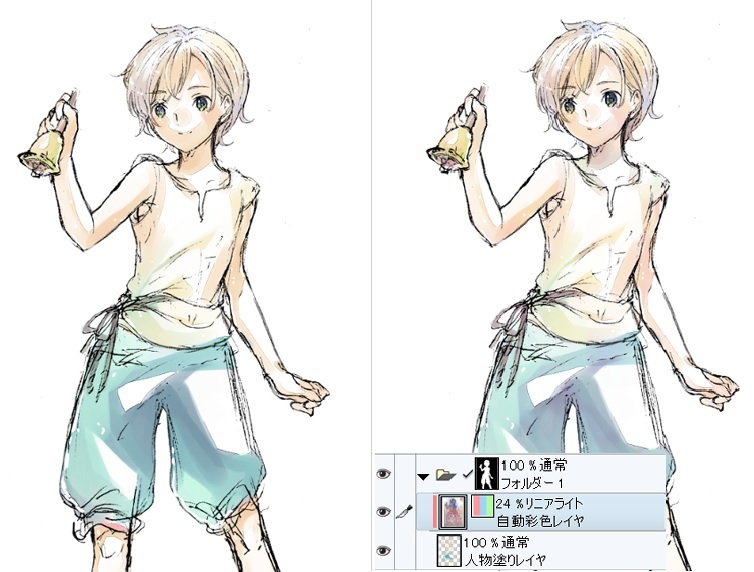 The person is now complete. Create a white layer at the bottom of the People folder to draw the background. This solves the problem of overlapping the background of a person. As it is convenient when processing it, put together the layers used for the person in one folder.

As a shepherd boy, I decided to draw a prairie and sheep on the background.
First, I draw from a distant landscape.
Mountains, trees, etc. become short by considering the edge of the watercolor boundary instead of a line drawing. You can also make the main character stand out by omitting the background line drawing.
For example, trees and grasslands, etc. are divided into layers and drawn because what is drawn on the same layer causes a watercolor boundary to occur in the outline of the state where all objects are combined. 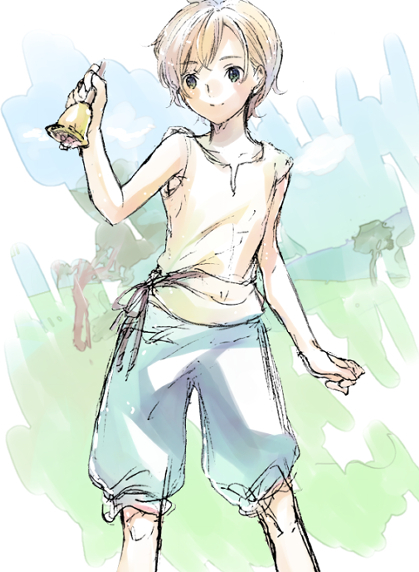 I could draw the background of the distance.

Next I will draw a sheep in front of the person. First, make two layers on the person. The upper layer is for creating a border with opaque watercolor and for drawing, and for the lower layer to create a foundation so as not to be transparent.
The base was made by lasso coating. By making the shape of the motif to some extent, it will be easier to draw in watercolors. (The background is displayed in green for easy understanding) 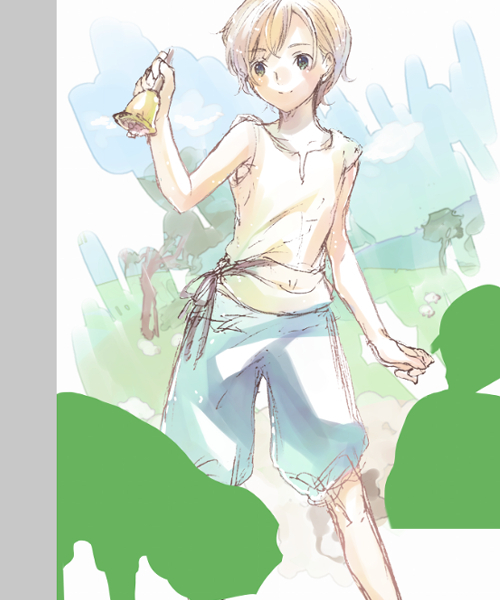 If you draw in watercolor as well as distant background, it is completion of the background with sheep. 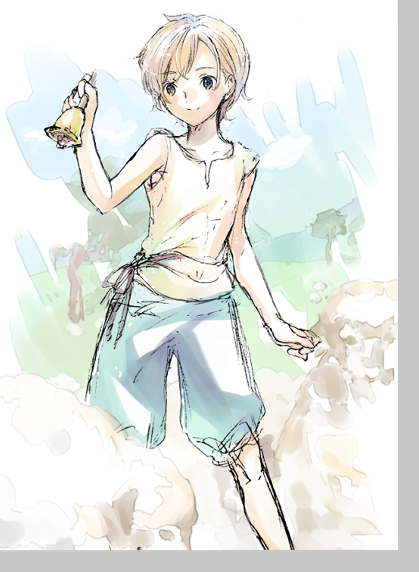 Finally, we apply tone correction. This time, I added a little higher saturation in the tonal correction layer, duplicated the whole, and multiplied by low density. Since only the line drawings were floating, I protected the transparency and made it brown with an airbrush.
This is completed. 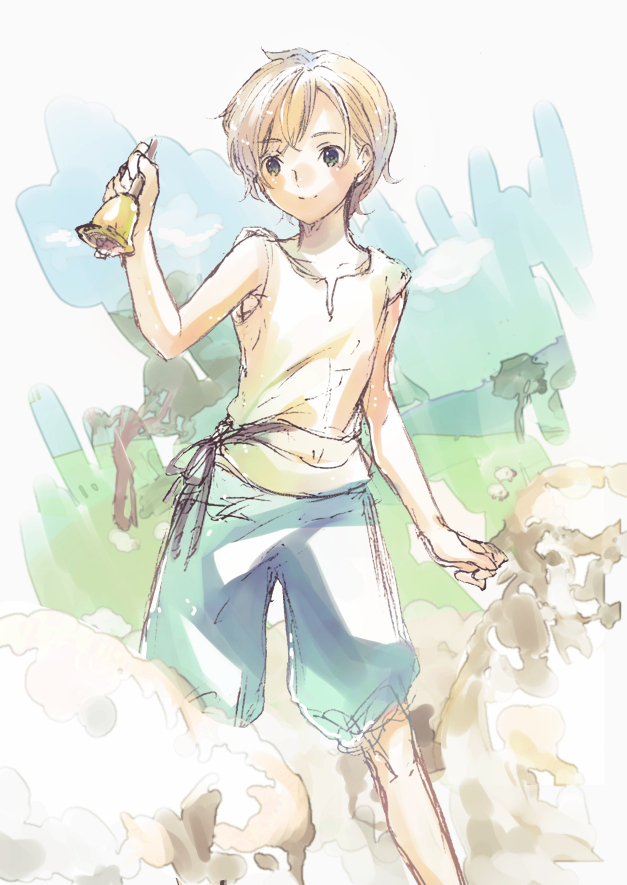