Hello! Hana-chan speaking! In this tutorial, I will show you how to create an Aura Effect, starring my character, Skylar! This technique can be applied to things like fire, steam and other air-related effects. 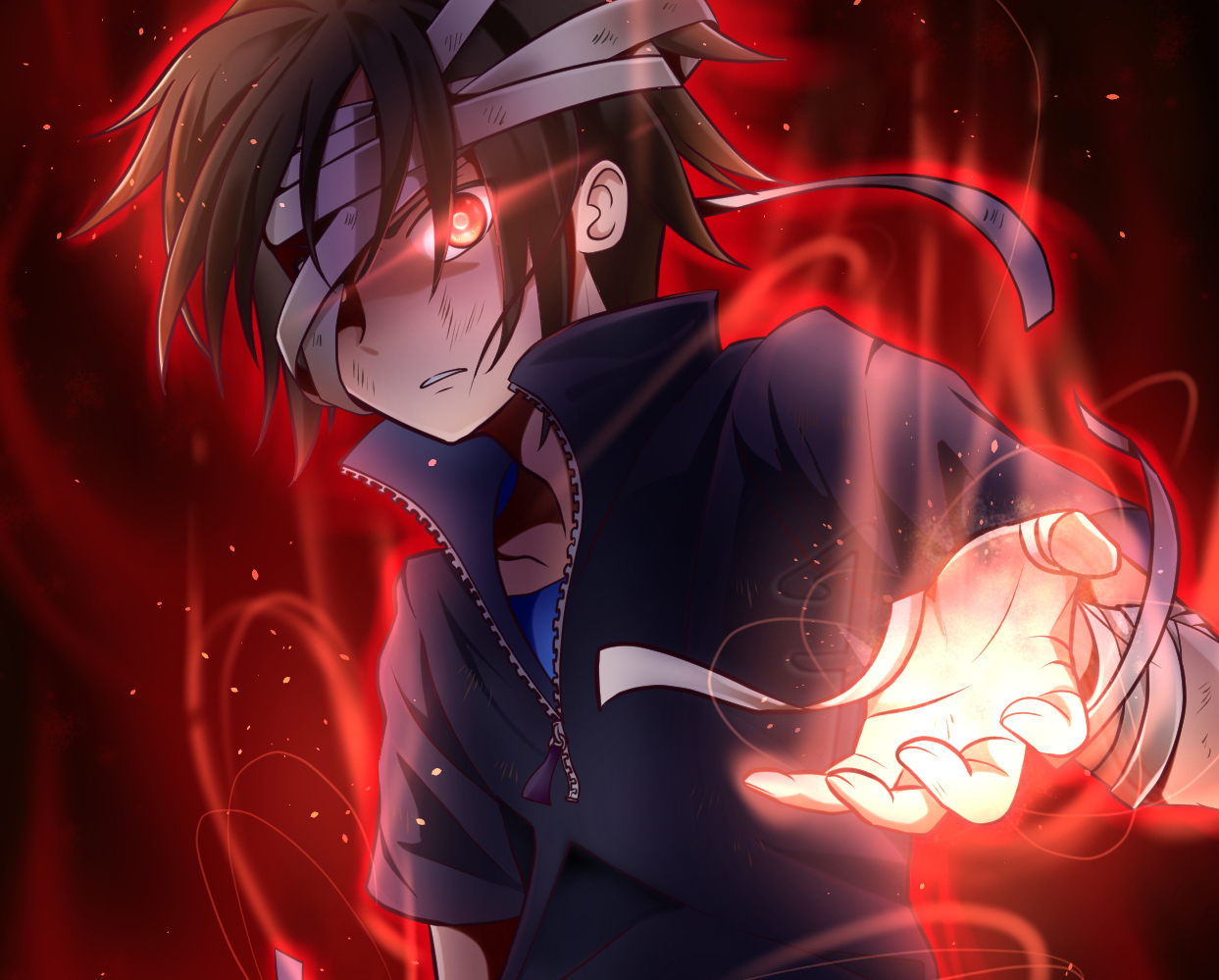 Before you ask, the tools I used are all EASY-TO-GET PRESET TOOLS. (Woohoo!)
However, this technique does require both practice and lots of patience.
So let's begin!

First, you must decide decide what the main color of your aura is gonna be.
Since Skylar's Aura is a fiery red, I'm coloring my background a nearly-black dark red. 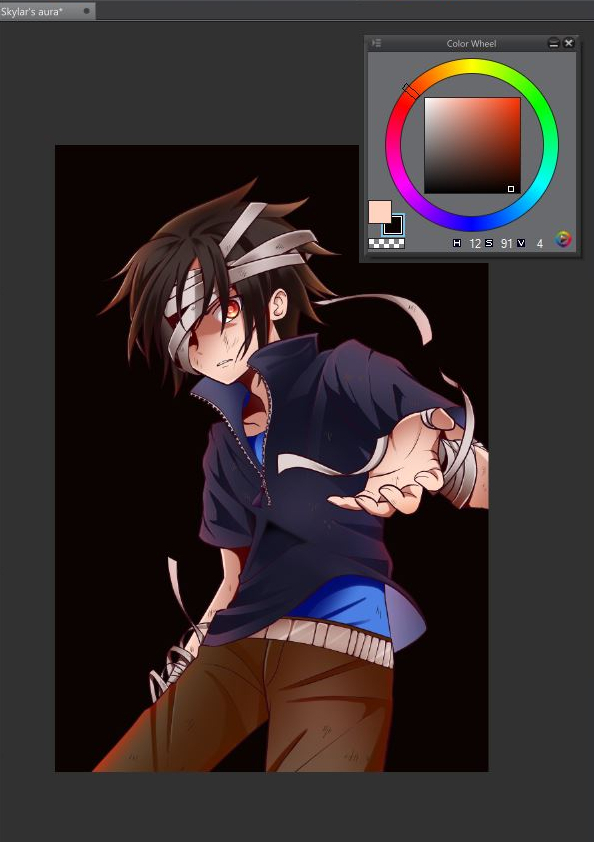 (If you want to be extra fancy, add a few splotches of slightly lighter red around your character, but not to light that it's noticeable. ^^) 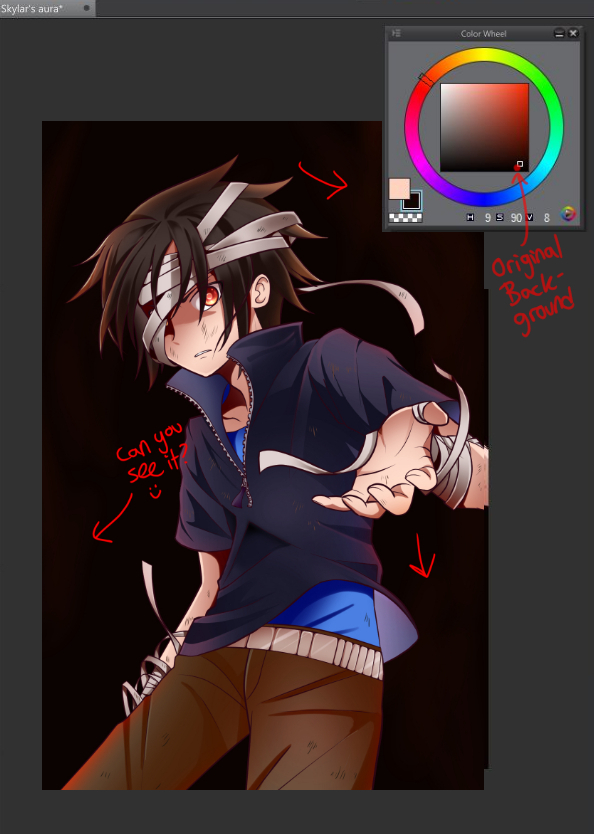 Next, we're gonna color what I call "The Shadow Cloud" with a more saturated (but still dark) red. The idea is to make this cloud vaguely symbolize the aura emitting from his body. 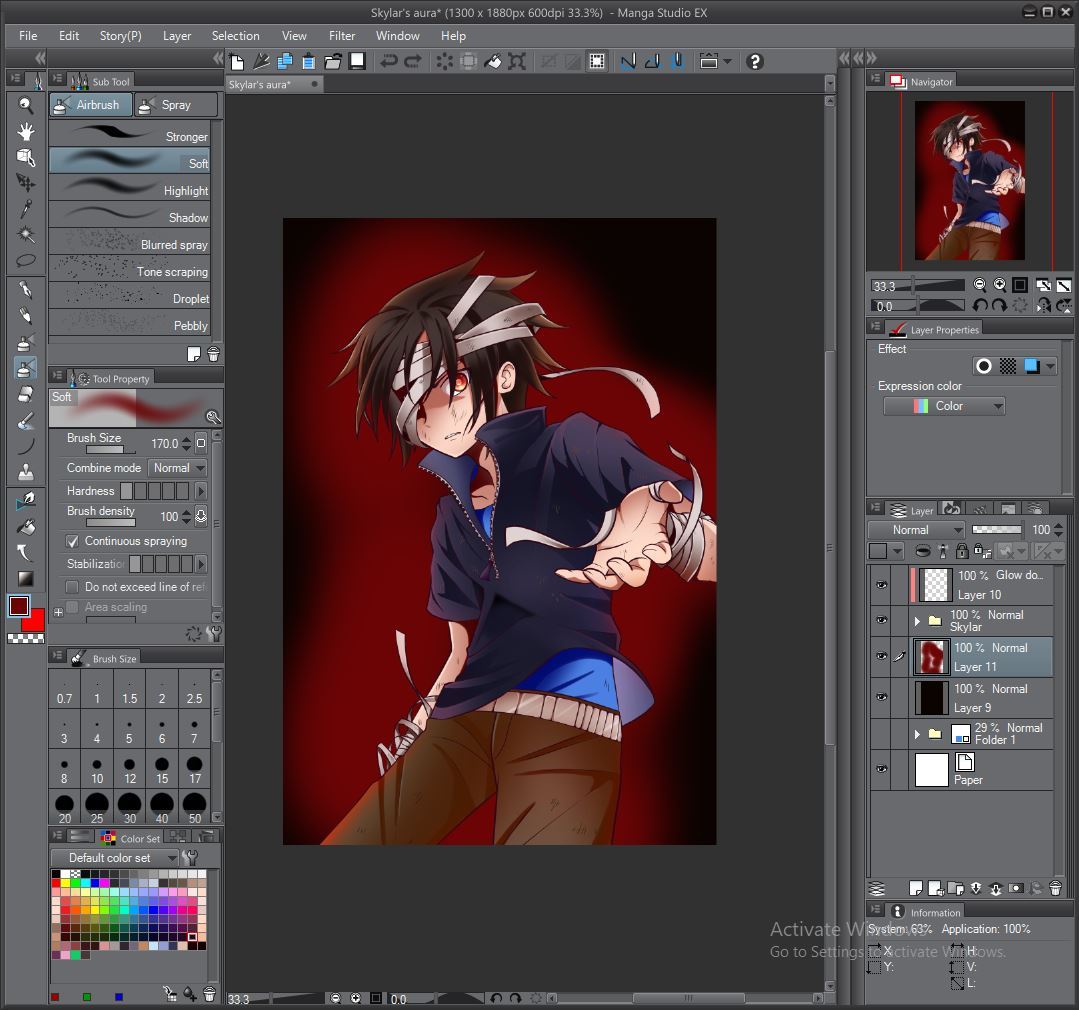 The next step(s) is pretty much how I did all the mist effect in this picture, with a few tweaks here and there. Although relatively simple, it still takes practice! But don't worry, you'll get there!

Now let's make that red cloud look more "steamy"
Using a soft brush and with gentle single strokes, ERASE the areas where the steam will most likely evaporate first, such as (in this case) the large space around the head, in front of the body, etc.
Can you see those swirls of steam forming already?
(Be careful not to erase too much! You can always come back in case if you want to erase more!)

After you're done, go over the strokes you just made but use a smaller and sharper soft brush as shown in Images 1 and 2 below. Only erase half of your initial stroke.
By doing this, you'll add in more definition into your swirls of mist while maintaining its blurry essence.

Some of the additional steam may look complicated, but in reality, you can create it by just playing around with the size and density of the spray brush! Try it! 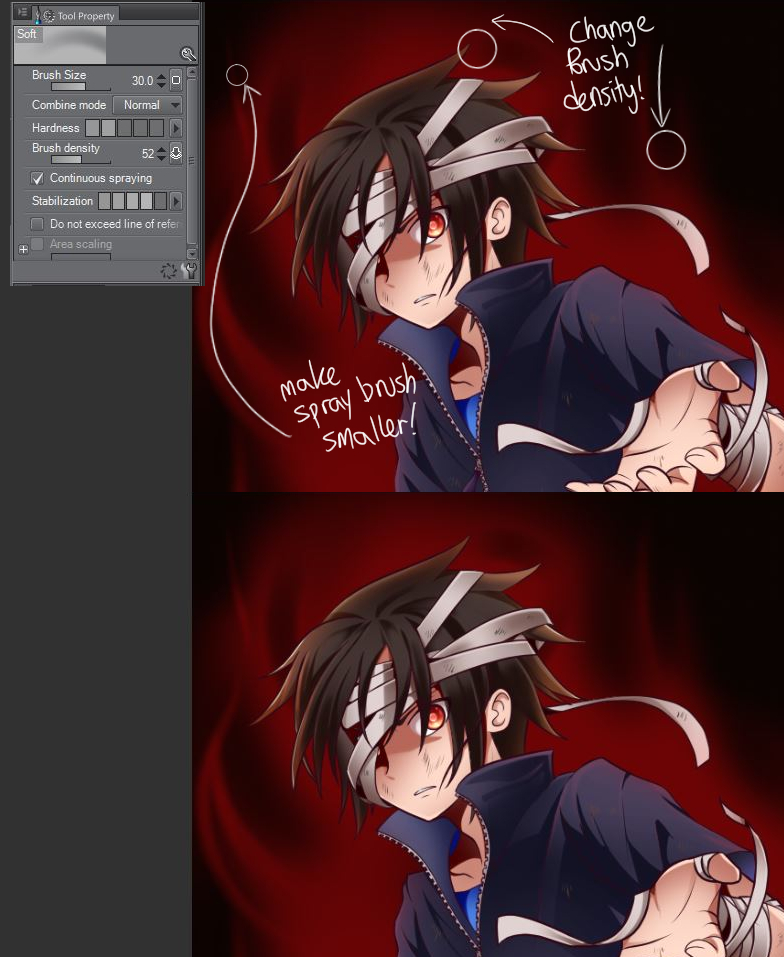 Once you think you added enough steam, use a blurry spray brush to make faint sparks flying around the shadow cloud. 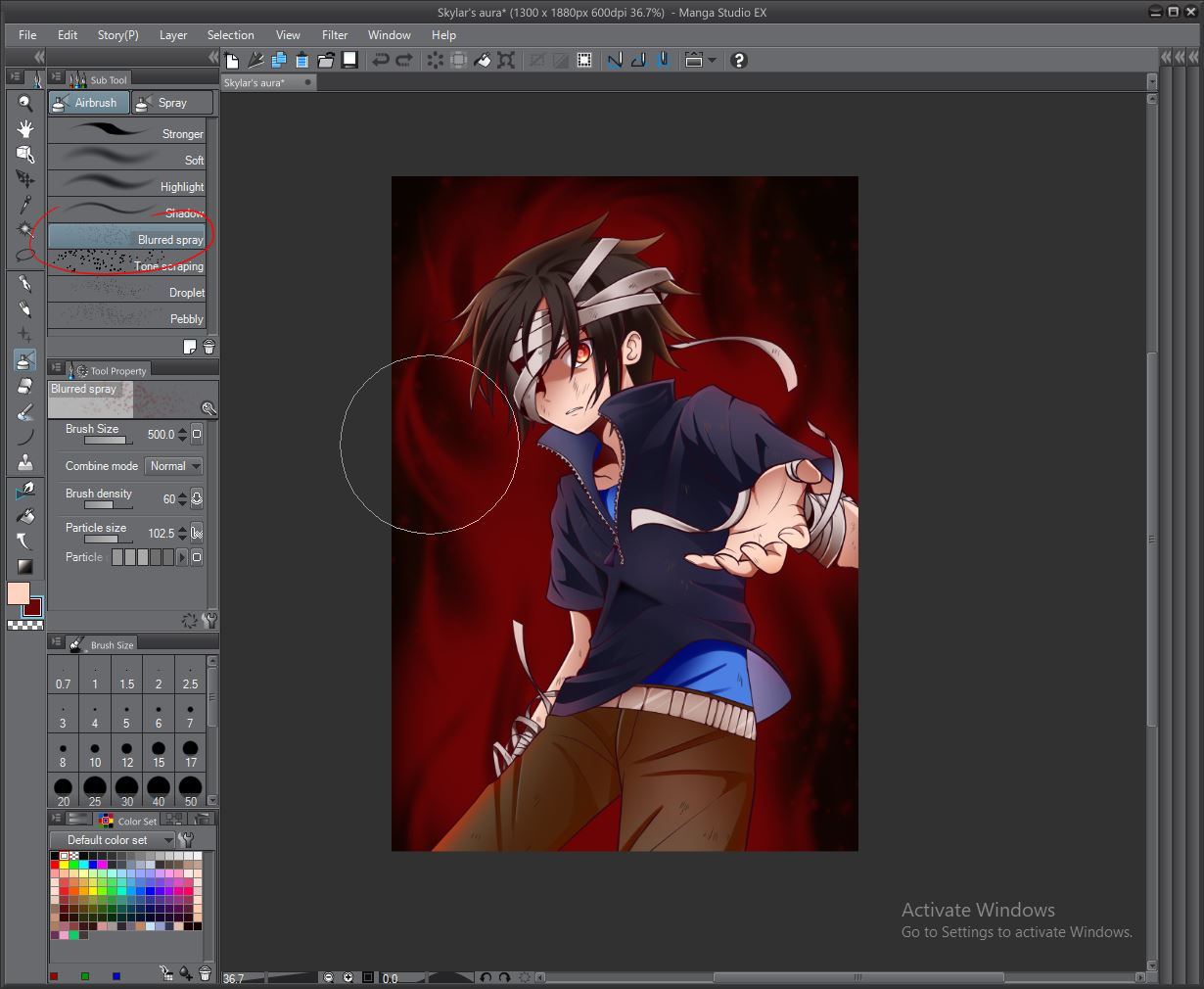 Now it's time to focus on coloring the actual aura that's flooding from Skylar's body!
We'll be using a bright red color and with a medium hard spray brush with a low brush density, paint a rough looking mask around the character.
(Notice that by using a low-density brush, you can overlap your brush strokes, giving it an airy look!) 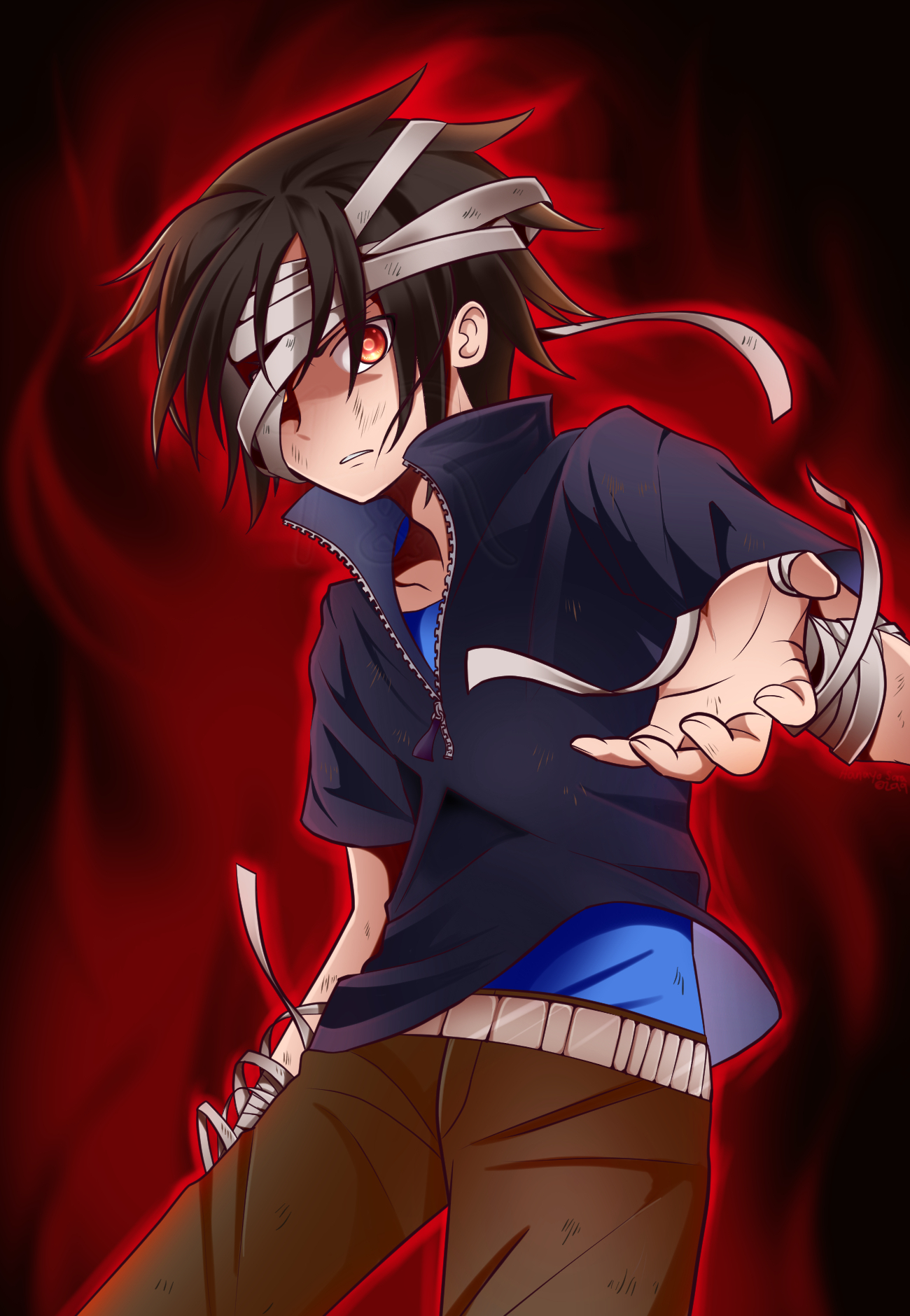 By the way!
To make the aura stick out more, the character should be relatively DARK. So I created a multiply layer and gave Skylar a purple shadow.

I only erased the areas I was sure the aura was gonna to reflect off of, such as the bottom of his face, his outstretched hand, etc. 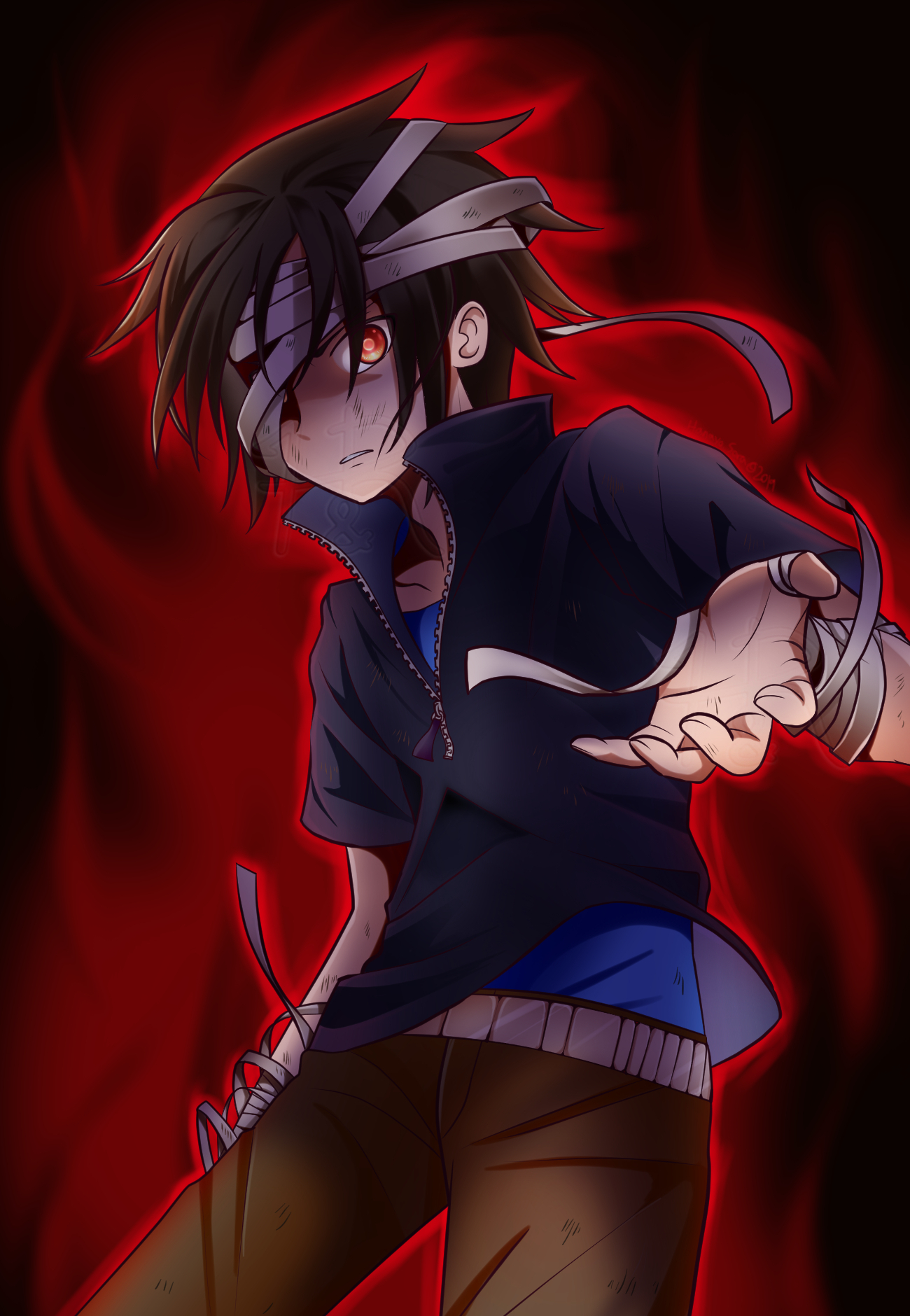 For Skylar's eye, I used the same bright red color on an "Add(Glow)" layer.

Now let's get on with the rest of that Aura!
Create an "Add(Glow)" layer, and choose a light orange hue.
Since we want to give the aura a fiery look, first make fairly long intertwine strokes as shown. 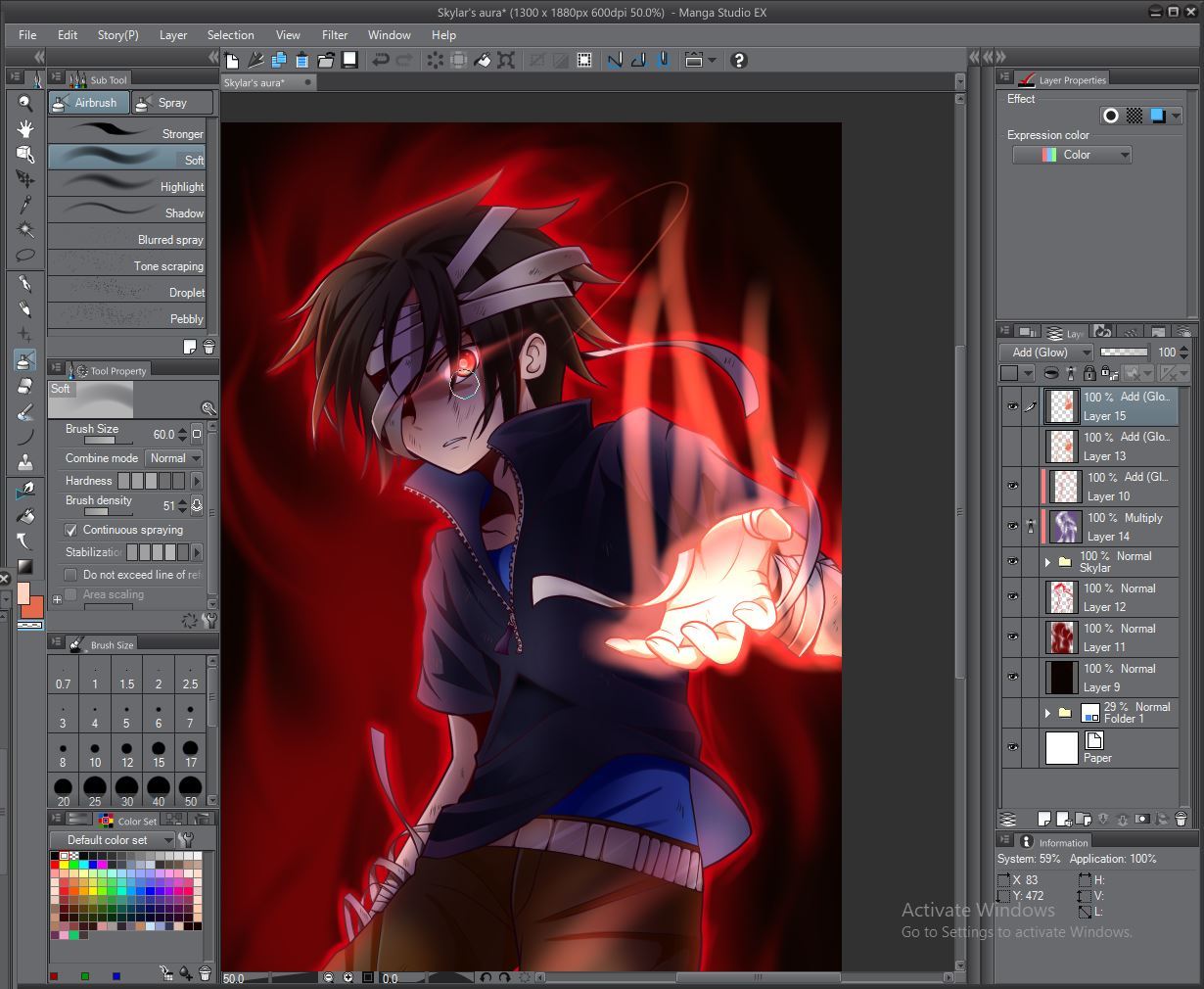 Then, just like in the Mist Effect Technique, thin out the sides of the strokes we made with an eraser. 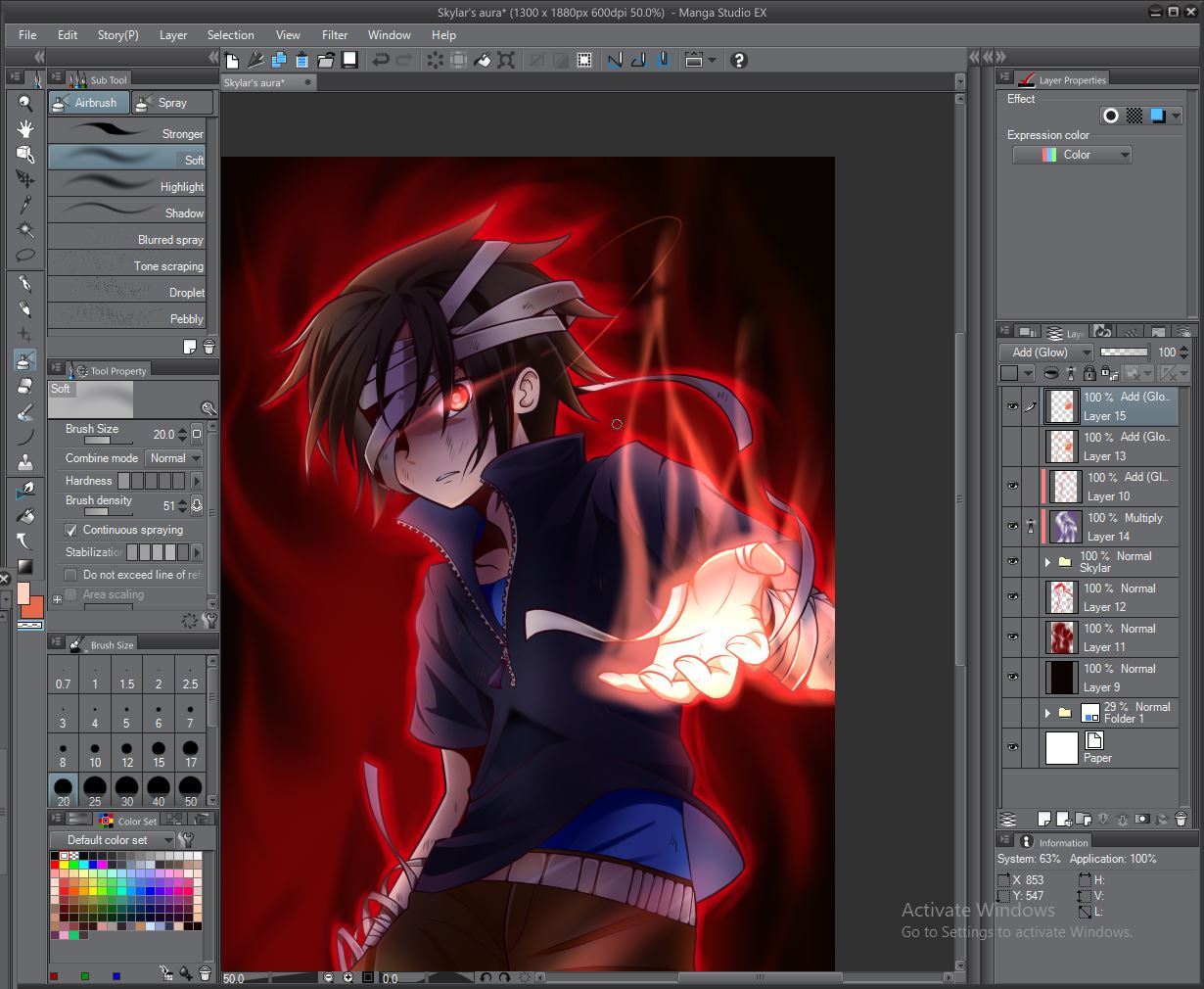 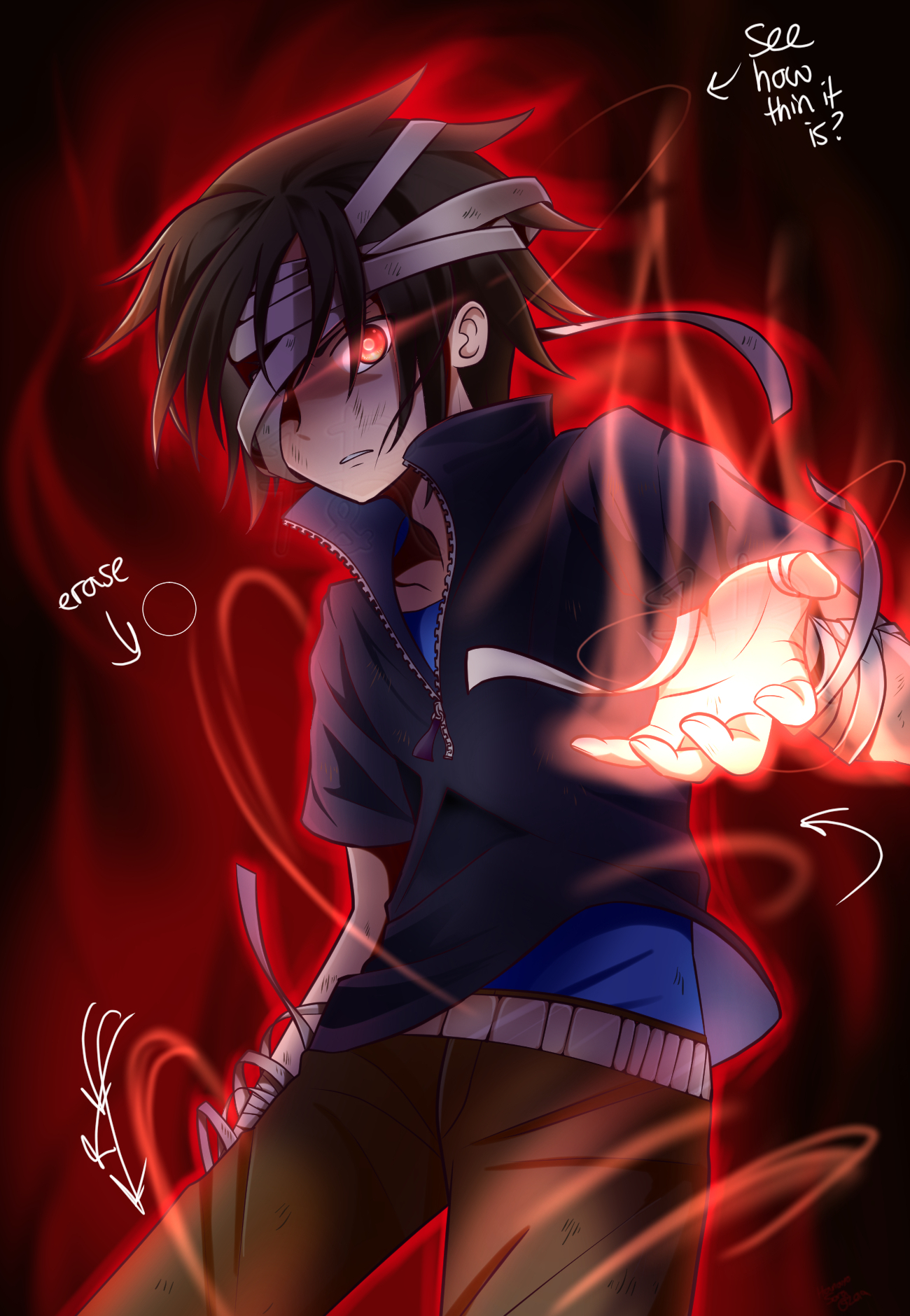 Finally, let's add some aura going straight up to give it that BURNING look!

And that's it! Now let's dust your drawing off with a Droplet Spray and you're done! 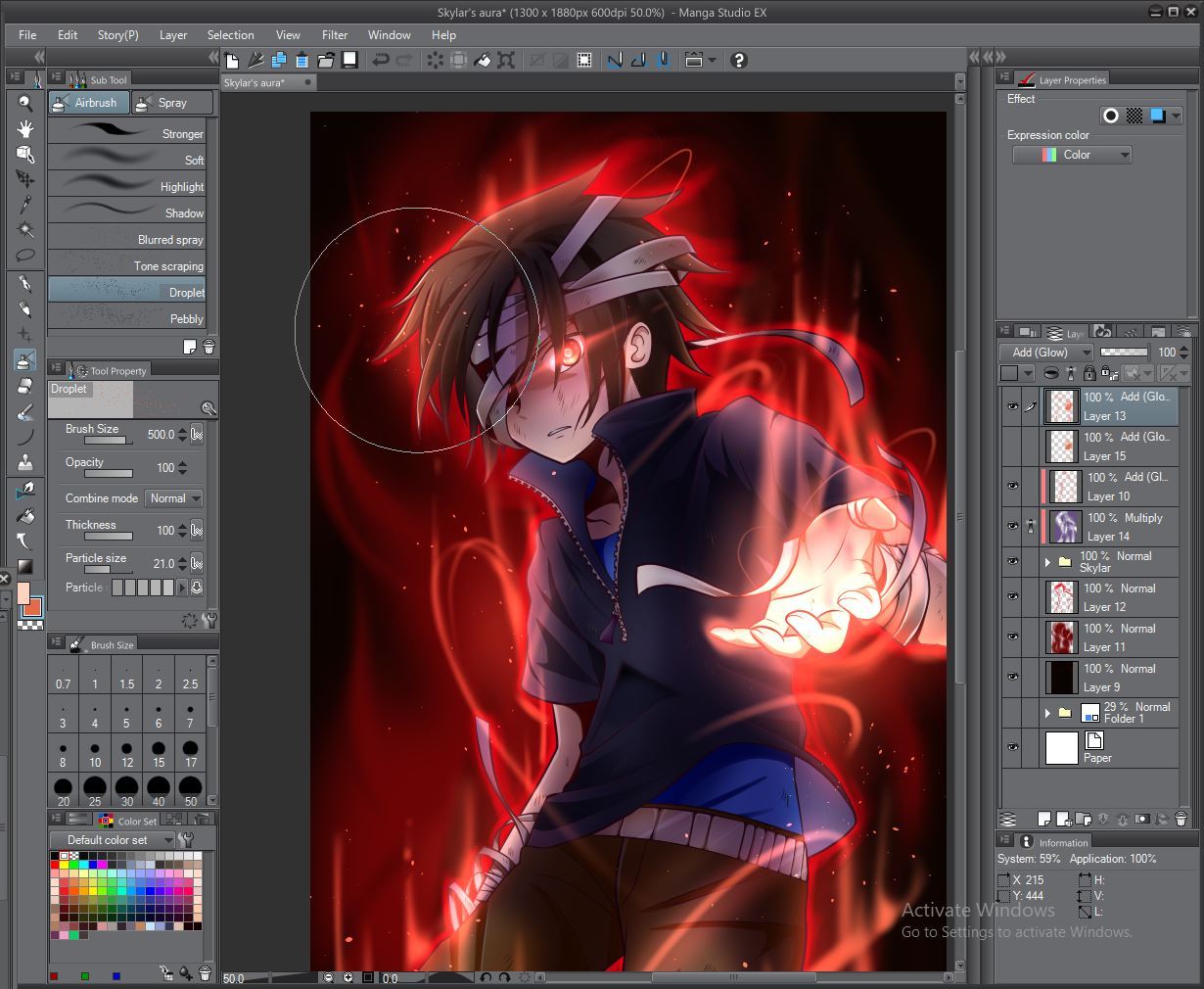 3.0 Final Art and Other Examples

Thank you for reading! ^^
Below, I simply tweaked the Hue to change the color of the Aura. 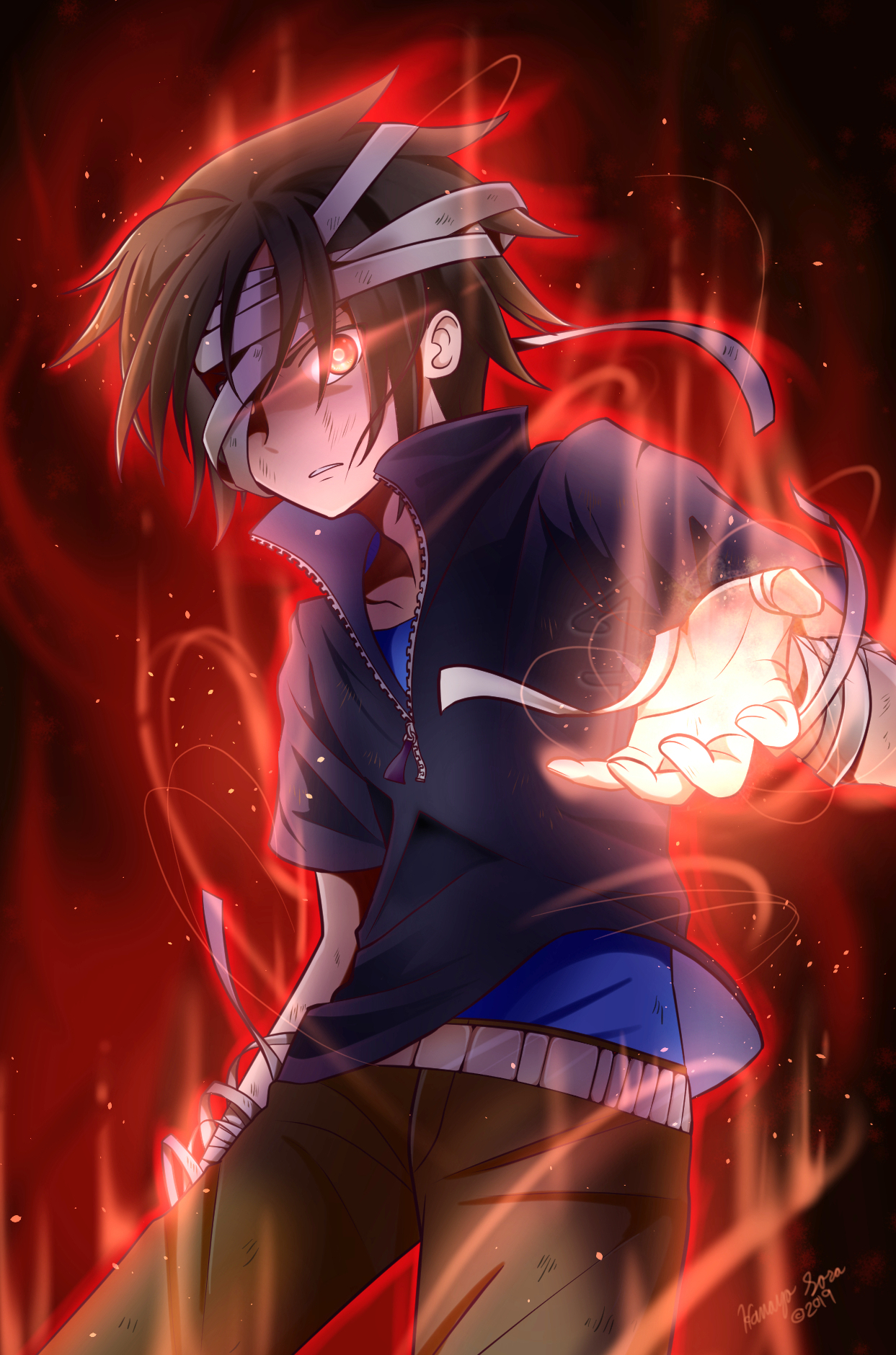