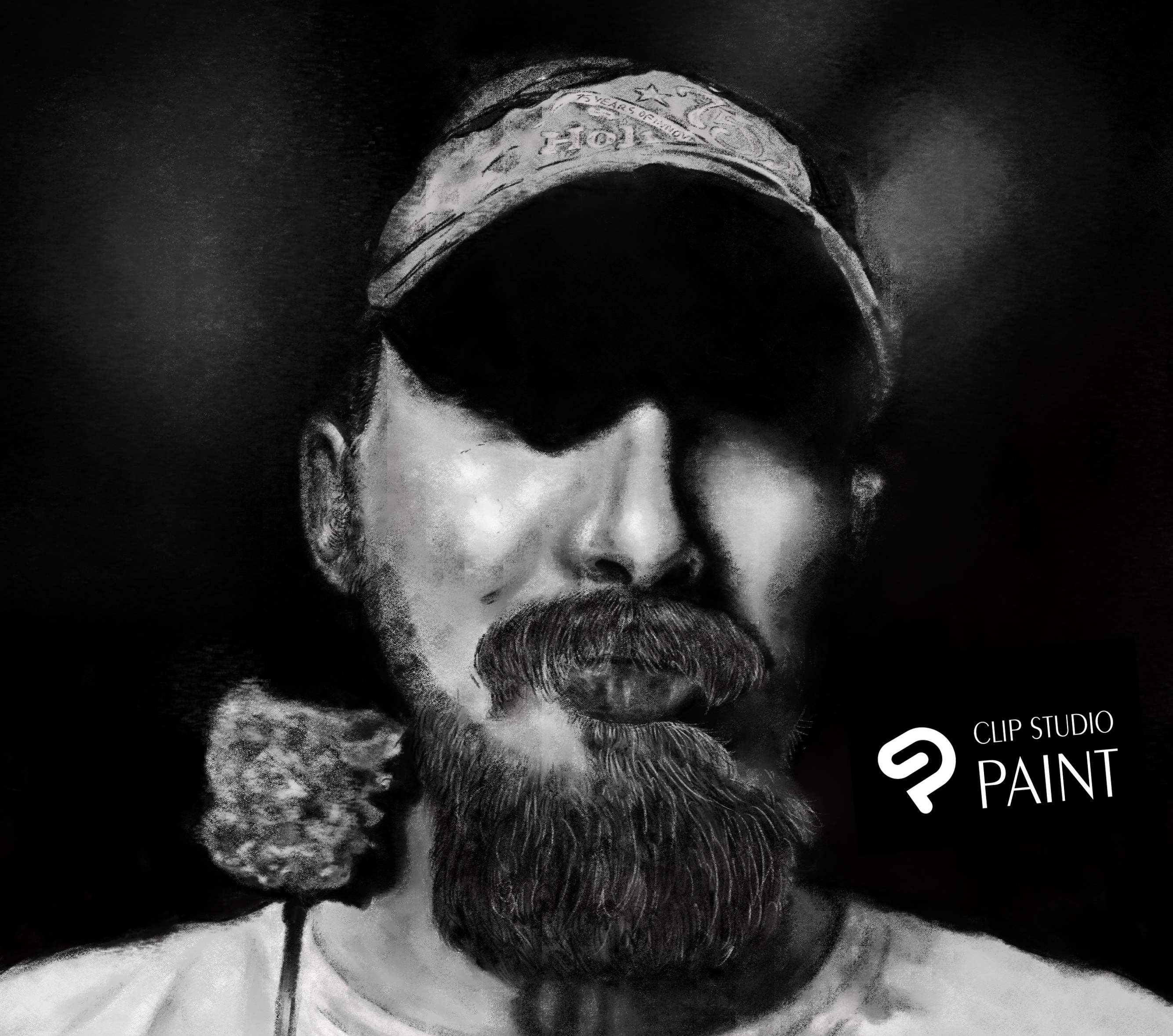 For this tutorial in particular, I am using a photo that I have taken of my husband, then desaturating it into black and white. This picture is high quality and so I am also going to use it as my canvas. If you do not have a reference photo that is a huge file, you can still create a portrait! Just start at step 1.

I will be using my own custom brushes for this one, from my Conte Pack. 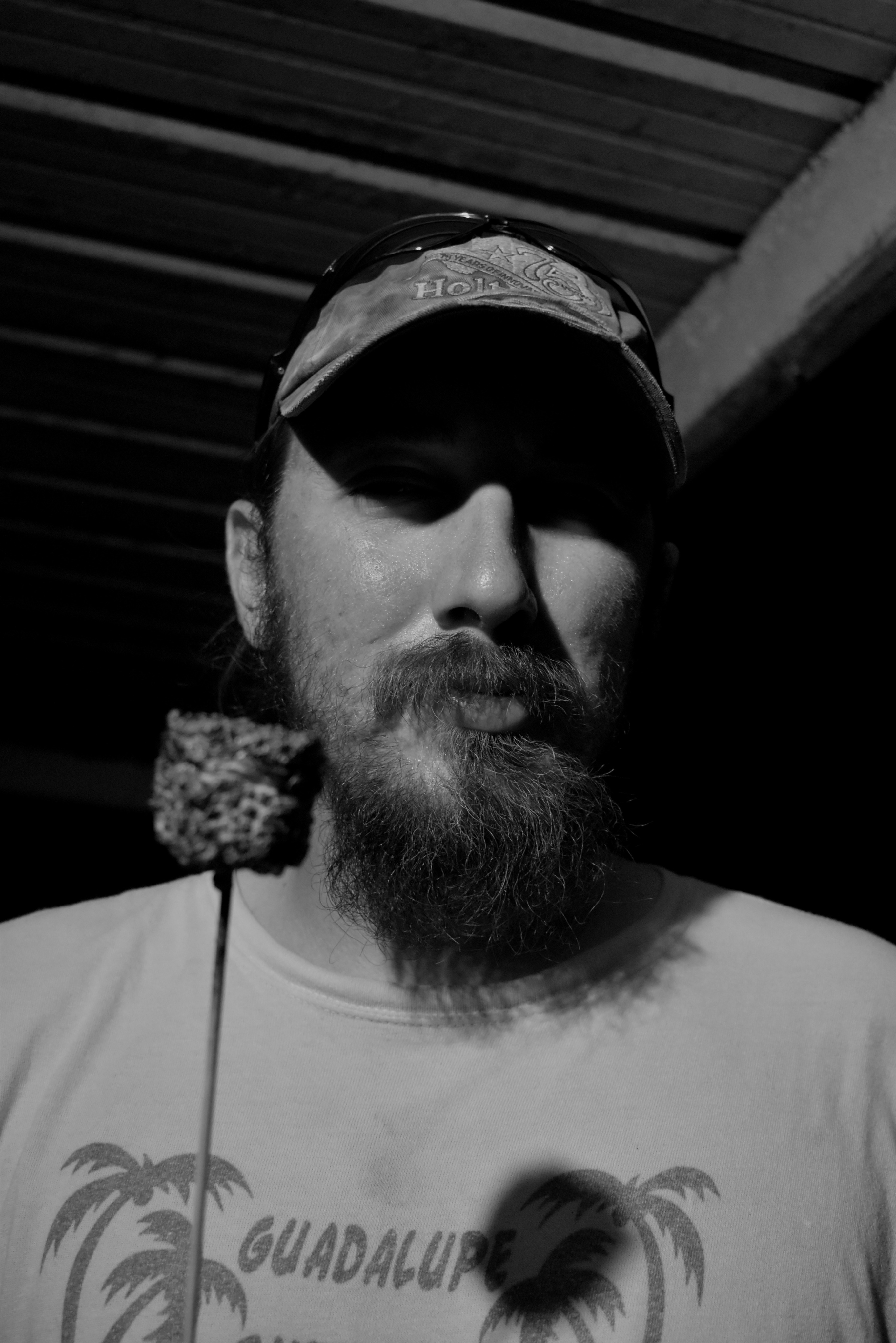 Create a new illustration file of any size. I usually set my default images to 1600x1200. 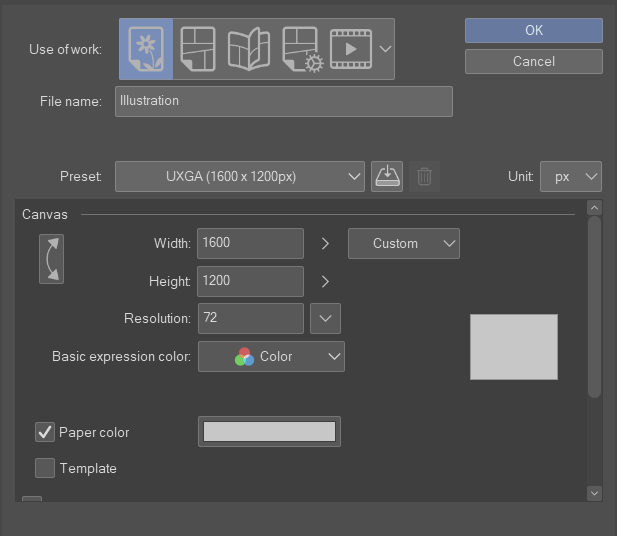 Go to 'file >> import', and then import an image that you will use as a reference. If your image is rather small, you can use 'scale/'rotate' tool to enlarge the image. I leave my 'scale/rotate' tool at the top of my screen. 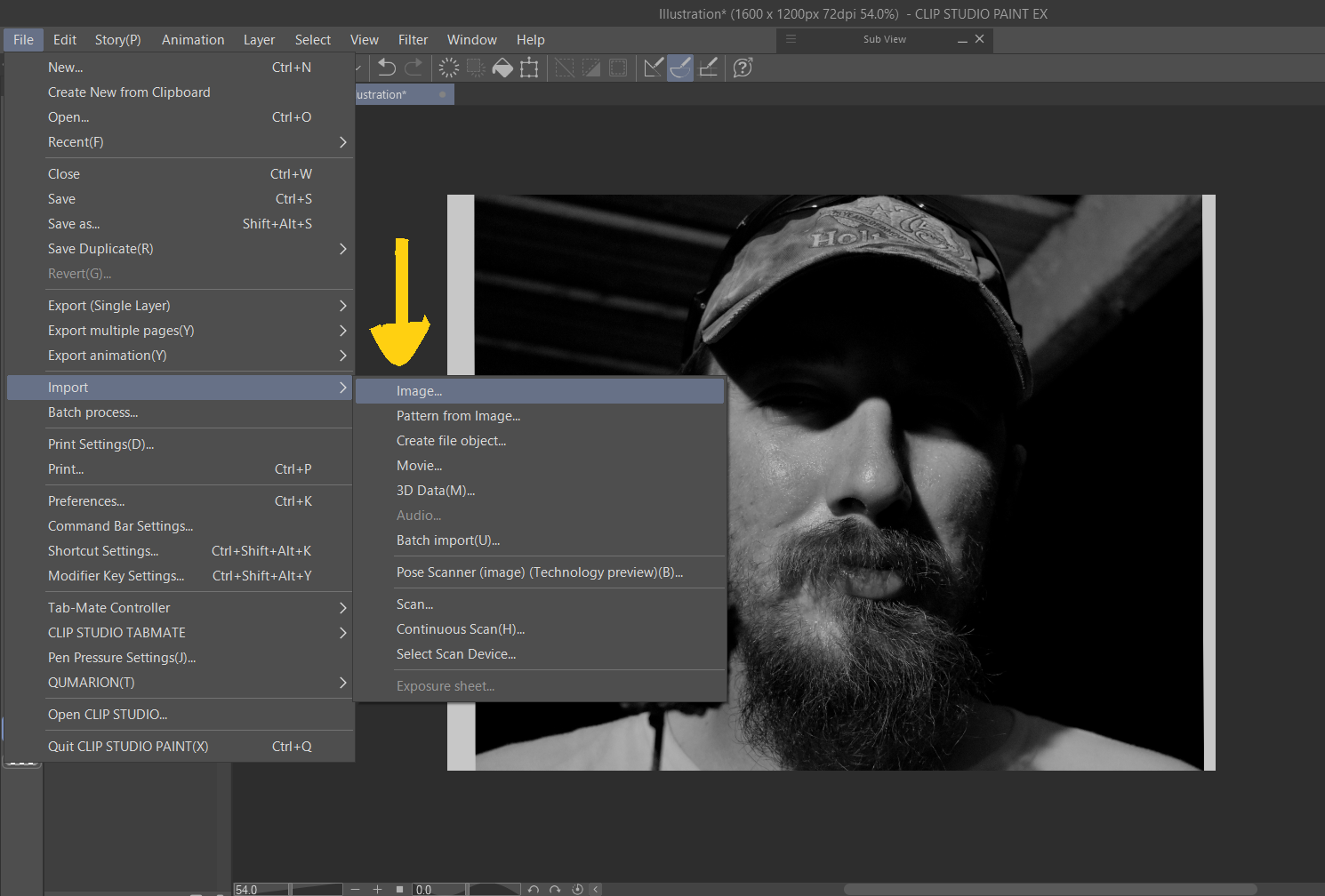 At the top of the screen, go to "window >> subview". This is a mini window that you can use to load your reference image and look at from the side of your image. Click on the folder icon in the sub view window to upload your reference image. The trash can icon deletes the image from the window. You can scroll in and out and rotate the image to help with your drawing needs. 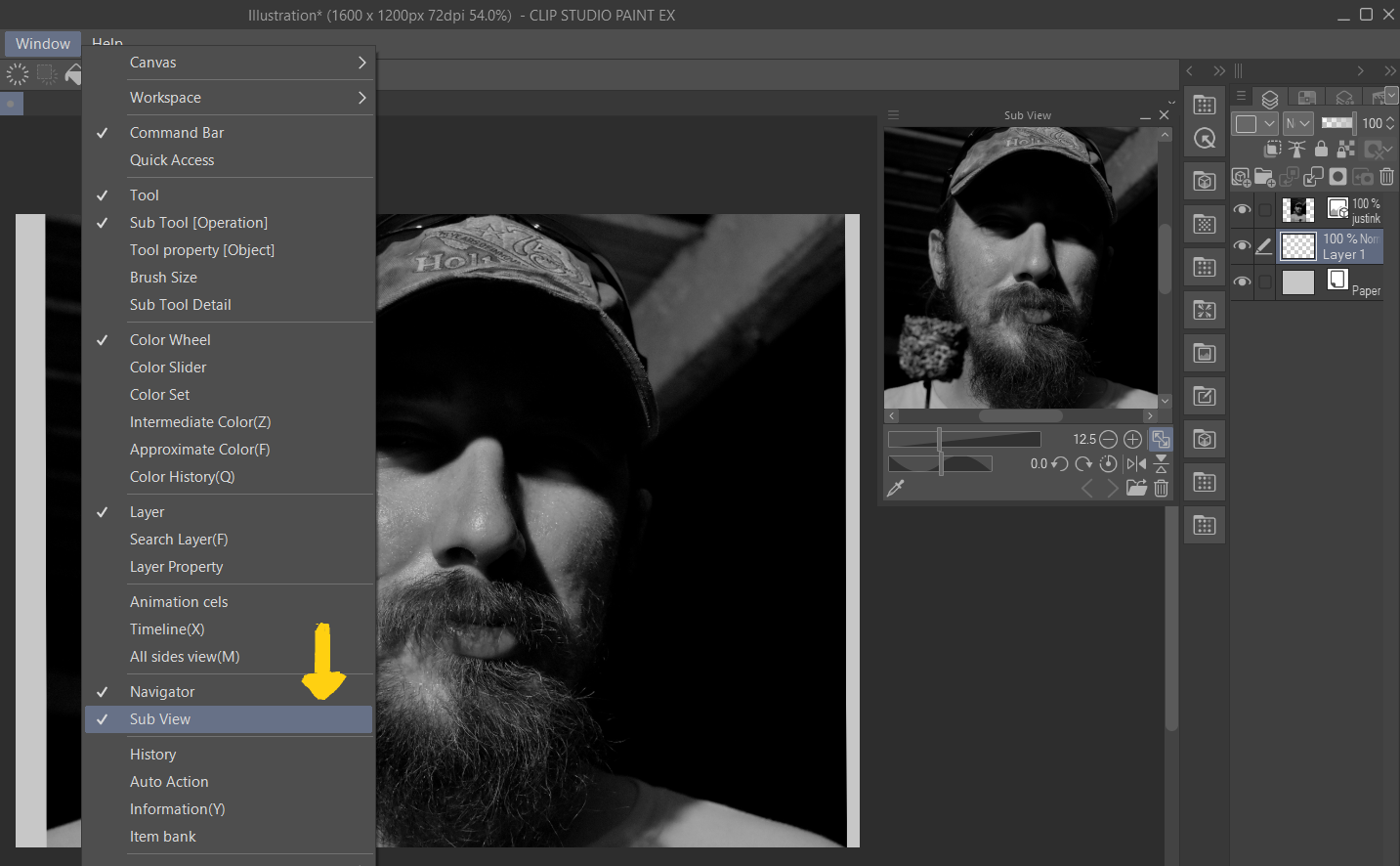 Take a look at your image, and understand the way it flows. Think about the 'Movement' of the reference image. What is the first thing that you see when looking at your image? In our example image, the first thing to catch my eye is the contrast of the black background versus the light shining on the face. My eyes move from the dark, to the face, to the burnt marshmallow. Once we understand the movement of the photo, we can prioritize what will be the most work out of our portrait, versus the least. 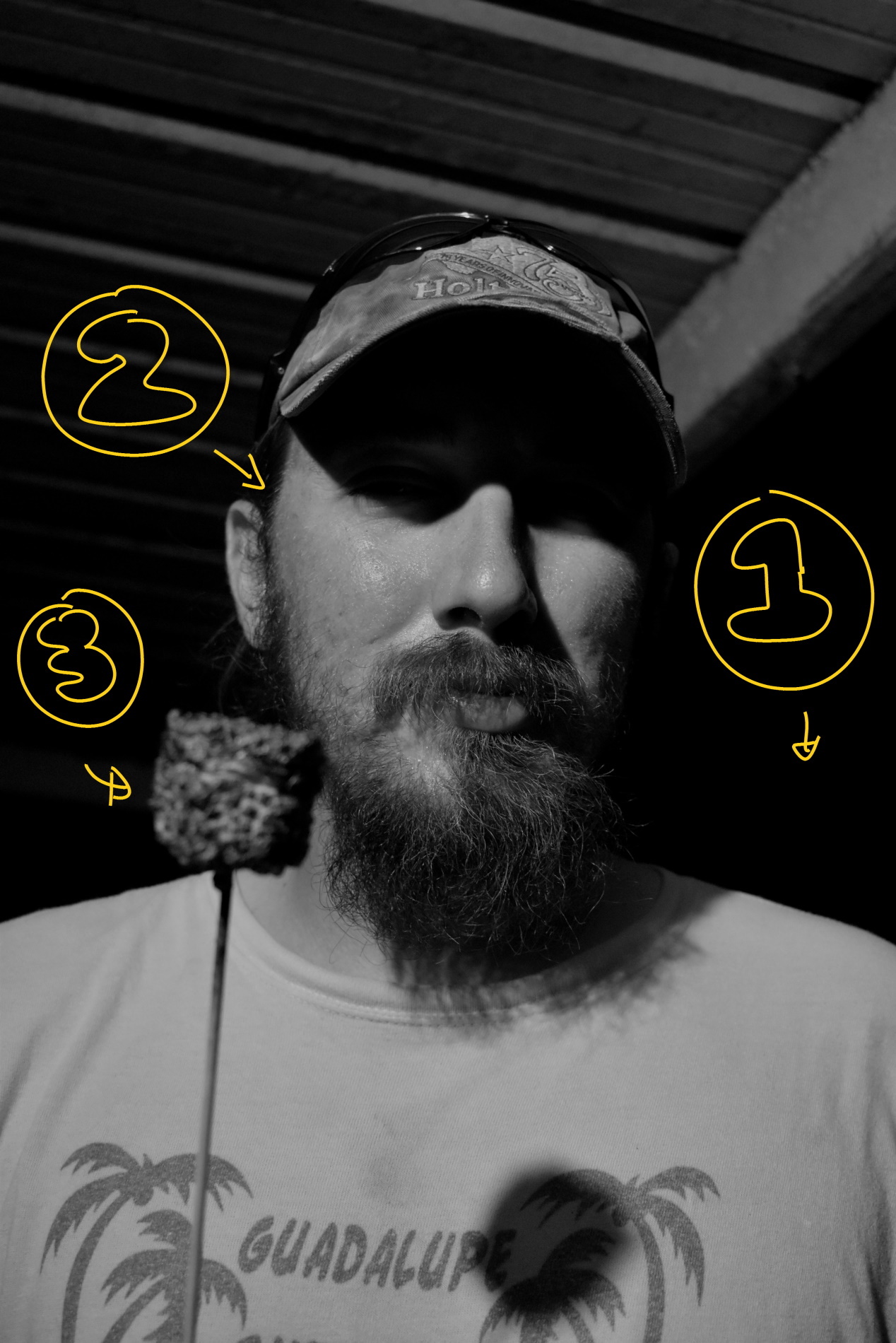 Create 2 new layers. I use one layer to sketch, and the second layer will be for shading later. 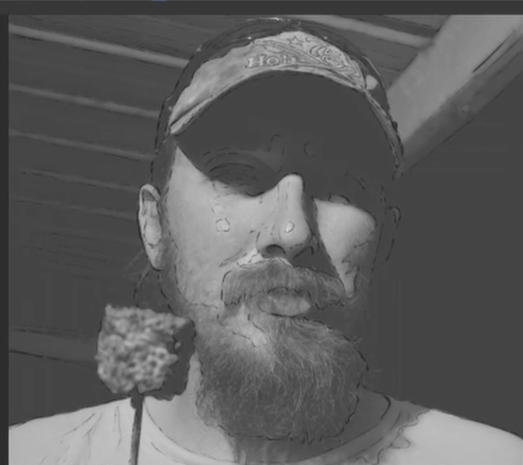 First I turn down the opacity to the reference image's layer, then sketch the outline to the general image. The main idea to this is to map the shadows. We will end up erasing parts of this layer as we go on in the piece. 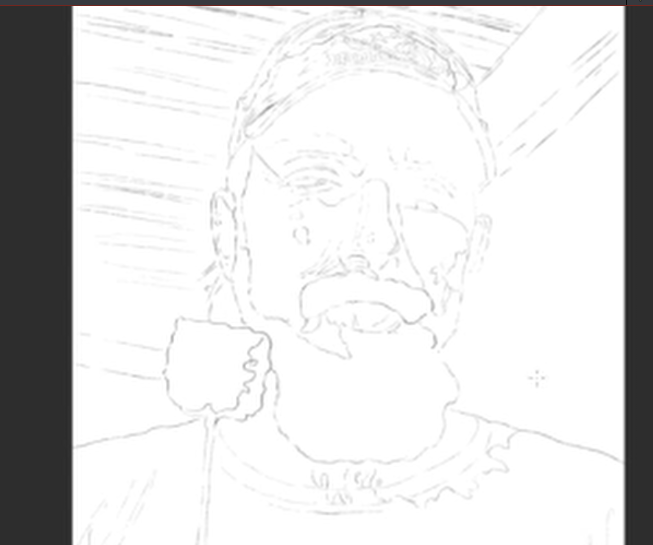 From there, start filling in the outline with basic colors. I like to add a base 'coating' to just about everything, that way colors can blend easier later on. 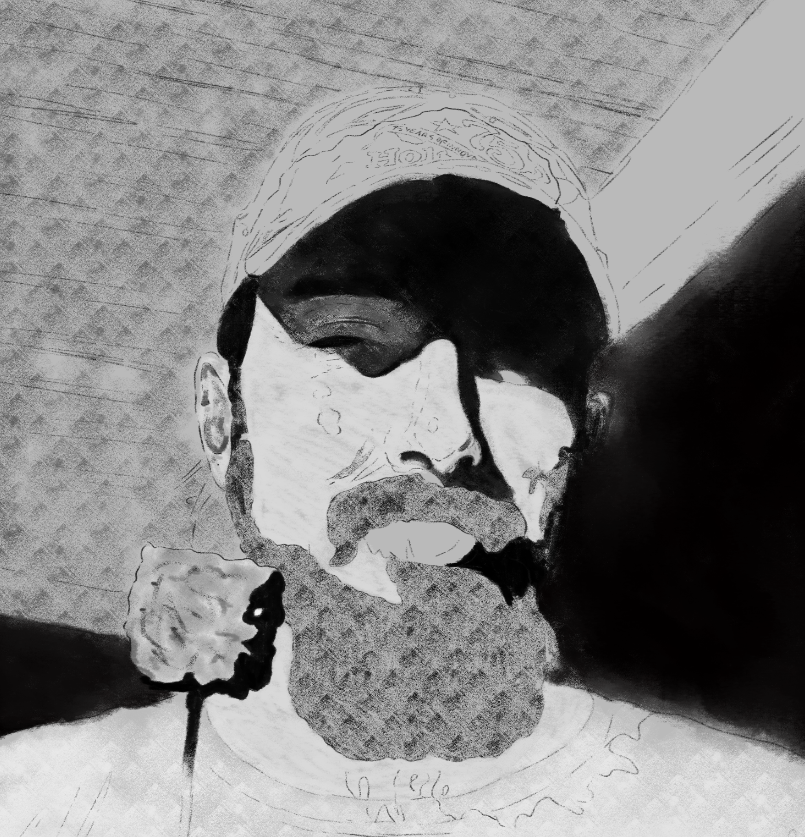 Once you've filled in the outline with the basic colors, start on the harder values. I tend to work from dark to light, so here you can see that I went straight to adding black in the picture. The idea, for me at least, is that when you work from the darkest value, it is easier to make things pop out in a picture the lighter you go. I've personally found that it is easier to make highlights in hair and eyes doing things this way. 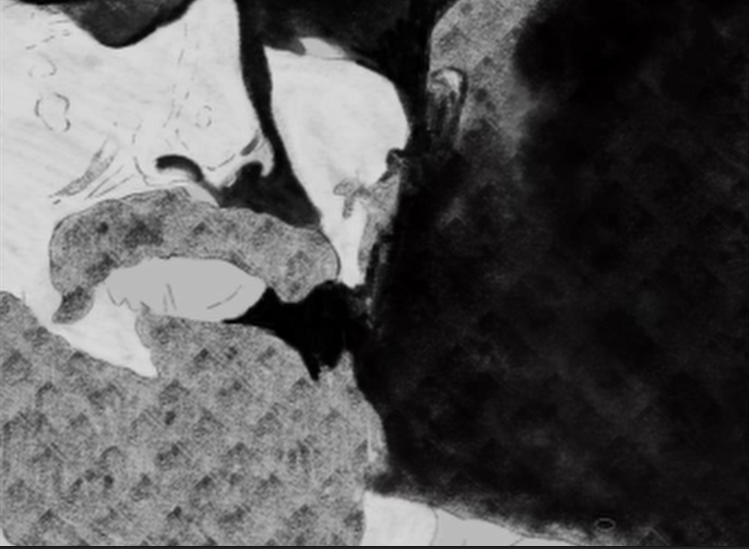 From this point, I start working on the face. My go to is always the nose, as it is usually one of the harder things to do. Once again, focus on the darker areas of the shape, then blend the value so that it shades the surrounding areas. Using this technique allows us to easily form the shapes we see on a face, instead of inherently drawing them out. In a way, it is like thinking of things inversely. Instead of thinking, "Oh I need to draw a triangle in order to make the nose.", you can instead shade around the area, making it this way instead. 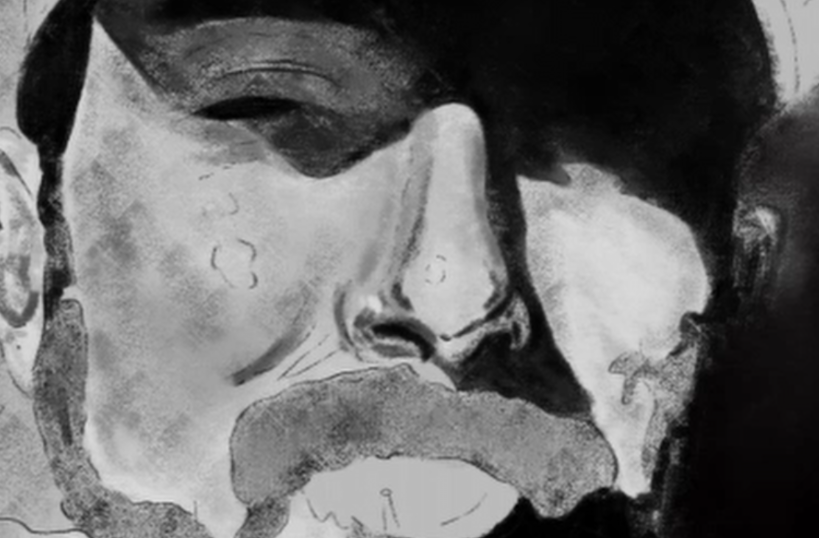 Now onto the mustache. Even though I created a 'base coating' for the color, I added another 'coat' to darken the area. Thinking of our reference, I felt like it would have better to have a darker background for the mustache, then draw the hairs in. 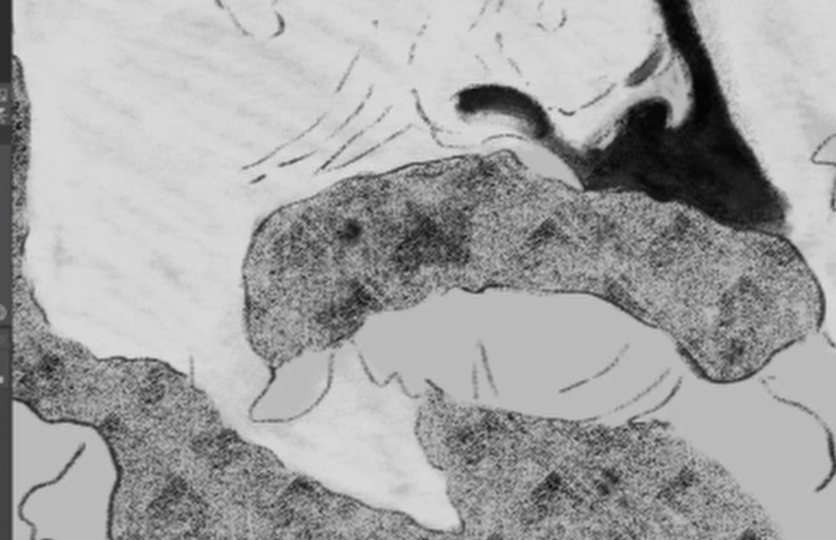 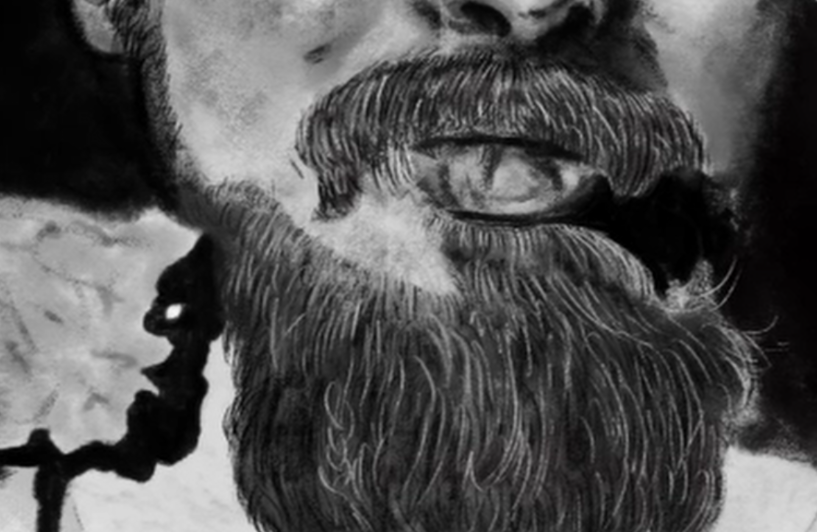 Now, when we look at the reference image, we can see that the beard hairs are all types of colors. Blond, light brown, and dark brown. Thankfully, since this is in black and white, we really only need grey and white. I took the sketch pencil I had, and created various random lines in the facial hair area. Since we are not going for hyper realism, it doesn't matter if they are not the exact strand of hair going any which way. The point is to get the main idea out there, while conveying our own style. 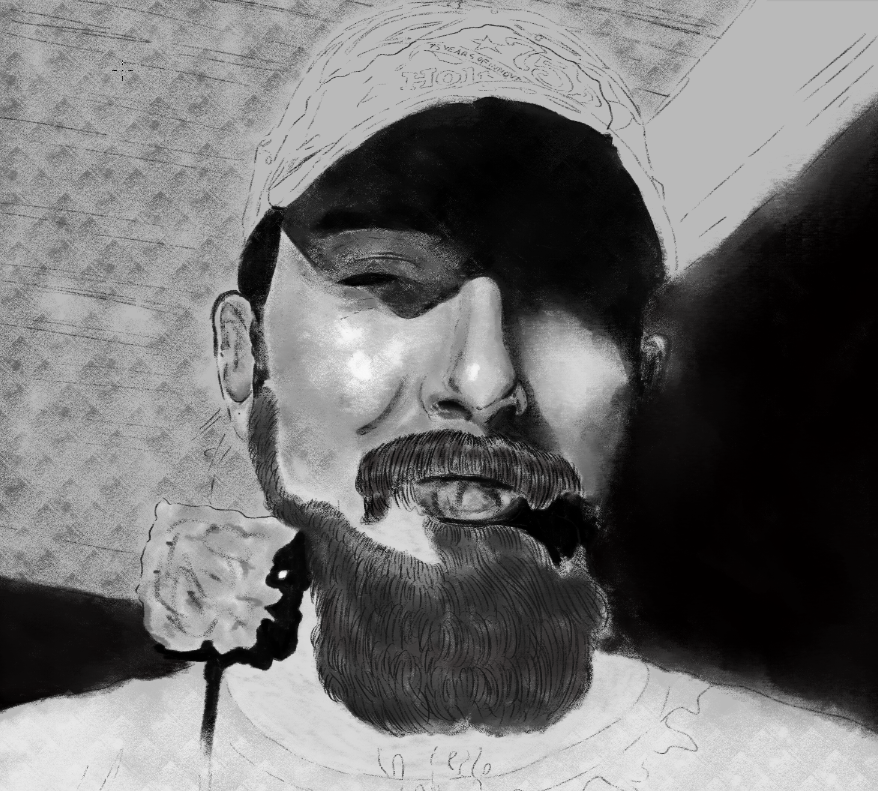 Now, I tend to bounce around when creating a picture. That's just how I've always been, and maybe you're like that too. Going to different parts of the picture can help you see what needs to be worked on more, and what's going right. Don't forget to zoom out at times and compare your work to the reference picture. Reflect on what may need more defining, and where some parts aren't dark enough, and what may be too dark. The most important thing to know is that this requires discipline, patience, and time. Do not rush, since we are not in a race. 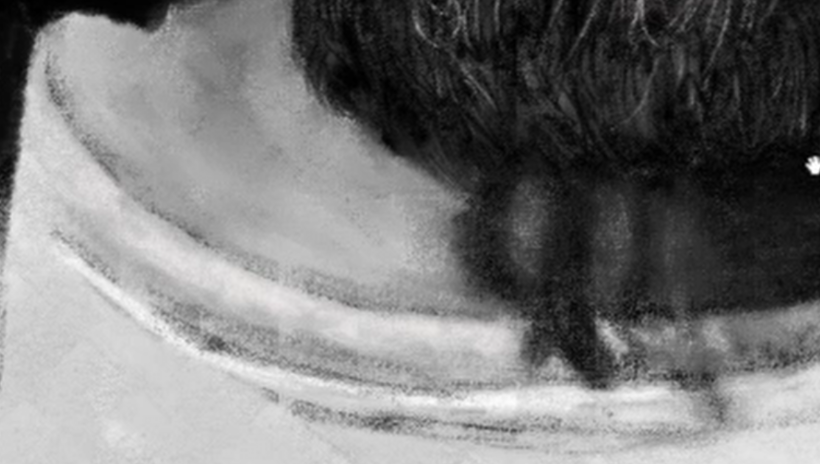 Next up is the shirt. In pictures like this, we don't have to draw every single line of the collar. Creating shadows that show the roundness of the shirt where the neck meets, and a highlight below that is good enough. 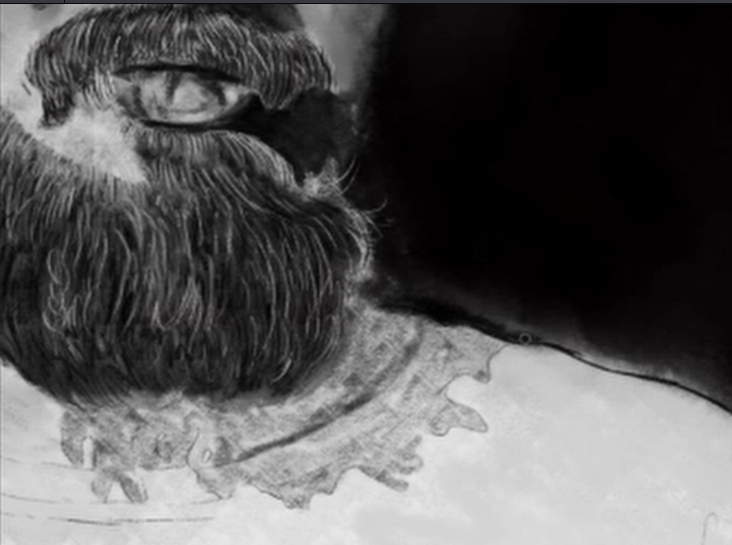 For the shadow under the beard, I created an outline and a base 'coat' as done before. Then I blended it and added another 'coat' to create a darker color. 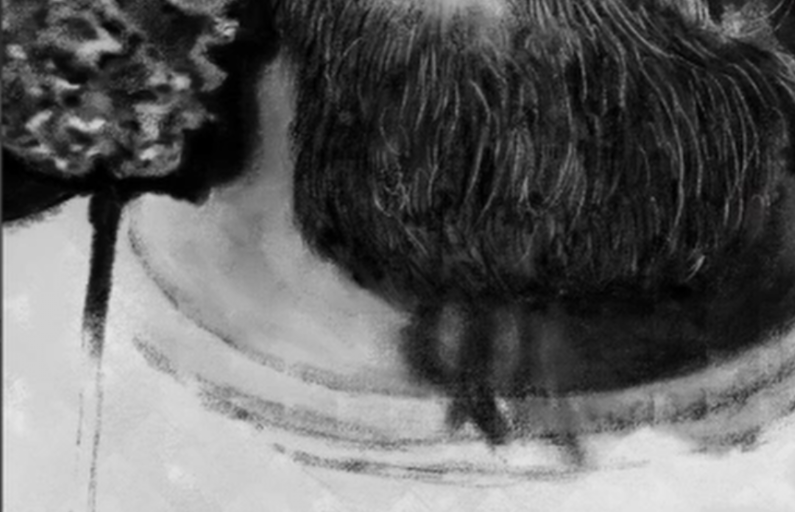 When we look at the reference image, we see that the beard has a shadow underneath the hairs. Creating the general shape of the shadows, we can blend a darker color that reflects on the neck. 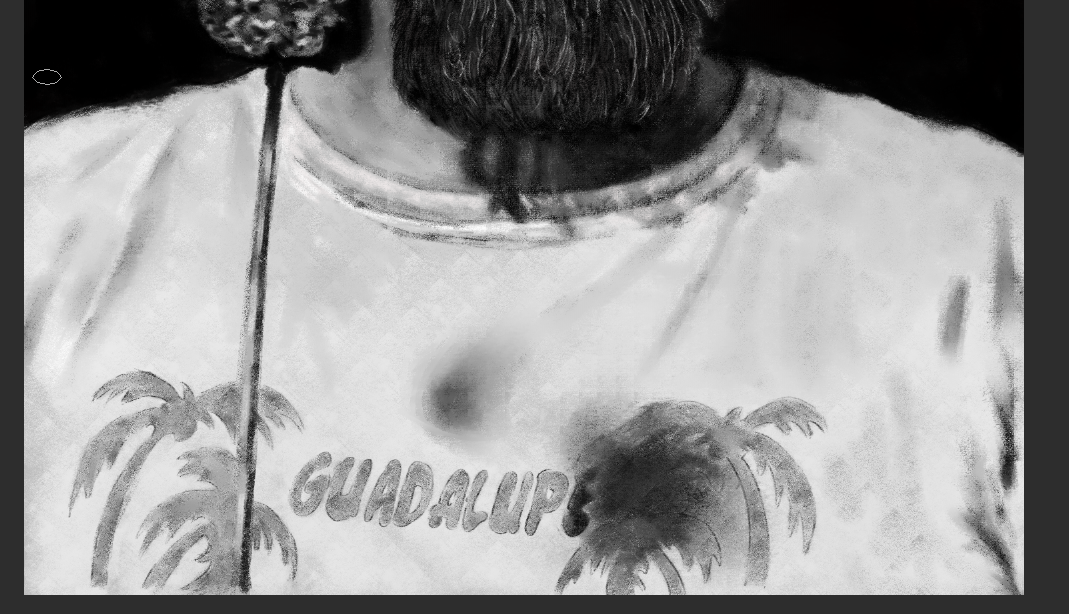 Using the original outline, I shaded in the trees and the word 'Guadalupe'. To convey the creases around the shirt, I once again went from dark to light. Creating a single thick line at an angle, I then blended the line, spreading it around as I went. Creating a lighter colored line juxtaposed against the darker one easily creates the illusion of a crease. 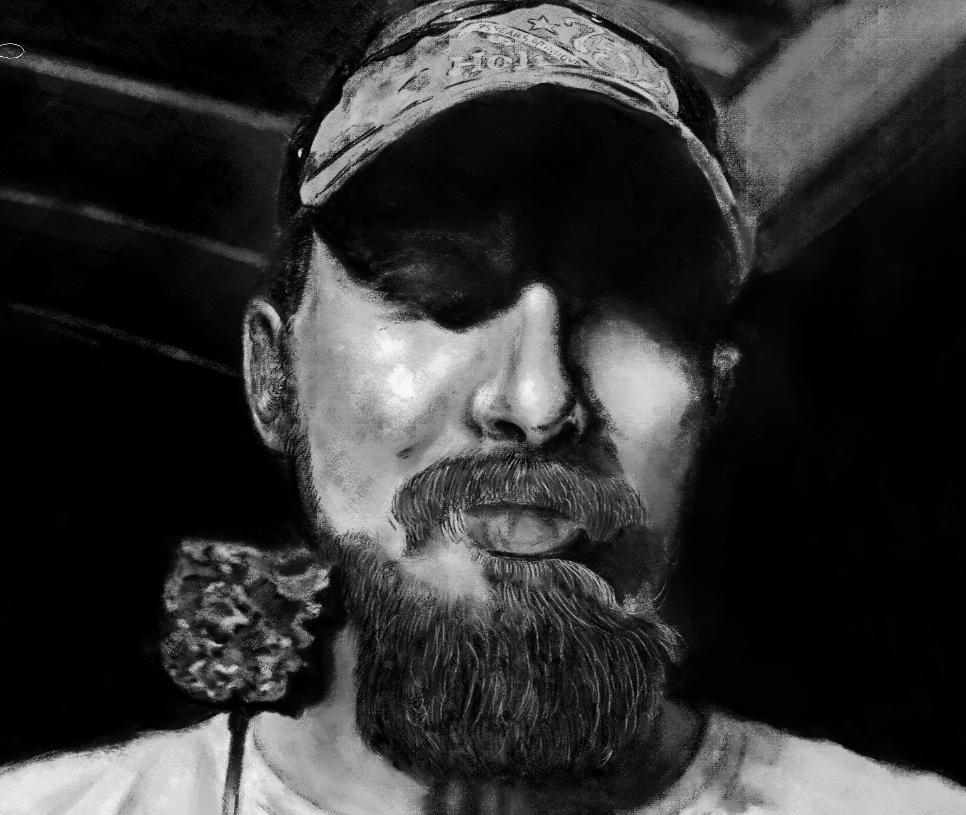 At this point, I would consider myself about done with the image, give or take. Zooming out you can see places that need to be completed, such as shading on the lips, the right side of the face, and work on the marshmallow. The next part to work on will be the back ground. 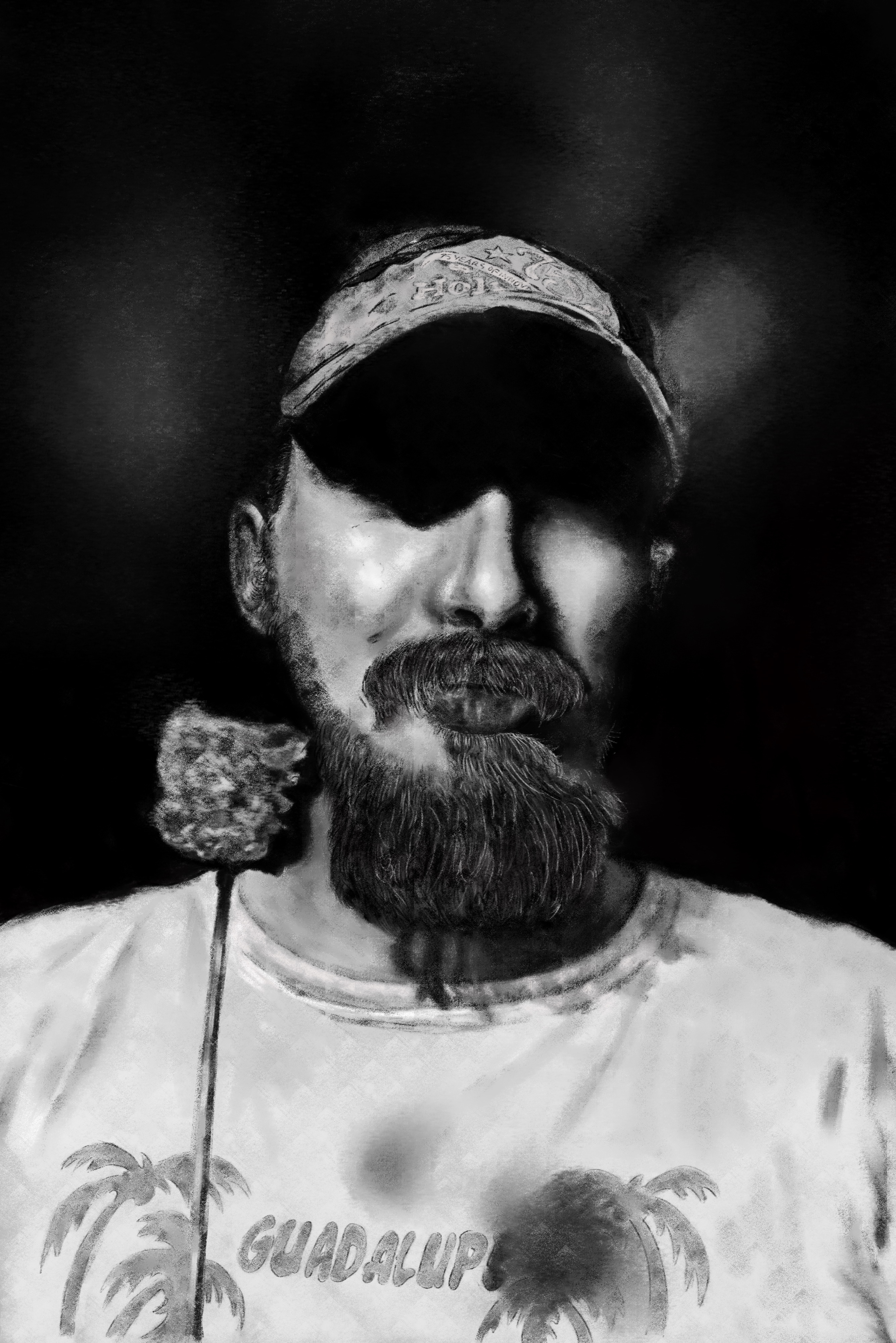 After much fumbling, thinking of different ways to work on the background, I decided to just do some general shadows behind the head. Going this route seems to work better, since my eyes are attracted to the movement of the original photo described above. Looking at the image now, I see the face first, the marshmallow second, and the black in the background third.

After a couple edits, I considered myself to be done. I hope that this has helped you in some way, and good luck!