[1] Setting up before drawing rough lines

I increase the resolution of the sketch I created last time before I start drawing the rough lines.

I go to the [Edit] menu and select [Change Image Resolution], then increase the resolution from 120 dpi to 250 dpi.

This will increase the resolution without changing the canvas ratio.

Next, I select the layer with the sketch and in the [Layer] palette, I lower the [Opacity] slider to lighten the color of the lines. I reduced the opacity to 24%. 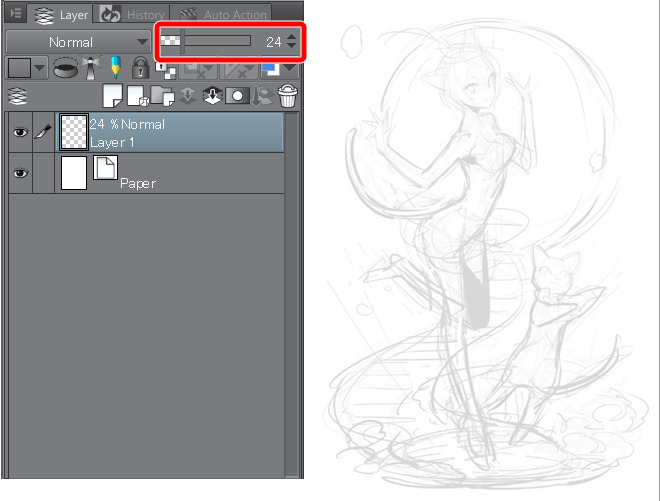 I make a new layer on top of this and draw my rough lines.

I’ll change my brush settings to draw the rough lines. 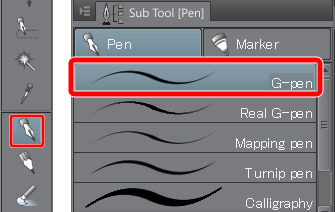 To draw the rough lines smoothly, I open the [Tool Property] palette and slightly increase the minimum brush size from pen pressure from 0 to 4. 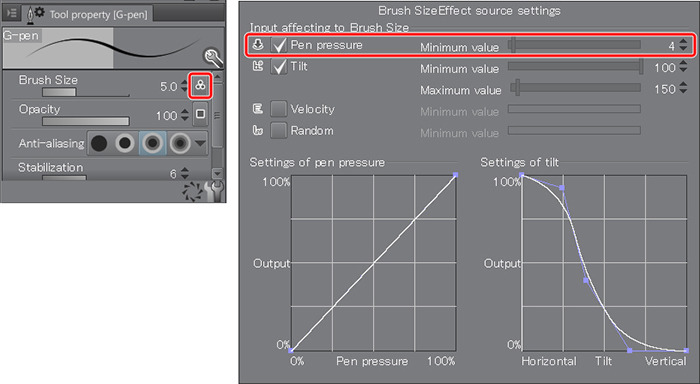 By setting the minimum value higher than zero, the line won’t break even when the pen pressure is low.

Now I’ll start my rough lines with these settings.

[2] Rough lines for the characters

The balance of the character's face is very important, so I create a selection area of any parts I want to adjust with the [Selection Pen], like for the thumbnails and sketches. Then I increase or decrease the size and change the angle with the [Scale up/Scale down/Rotate] tool.

The eye shape has a big impact on the overall effect, so I adjust it carefully. I adjusted the width of the right eye.

I am right handed, but there is a tendency for people to be better at drawing faces and bodies facing the opposite direction to their dominant hand, and find it hard to draw things facing the same direction.

Because of this, I use the [Rotate] and [Flip Horizontal] tools in the [Navigator] palette to move the canvas so that the lines are at angles that are easier for me to draw. 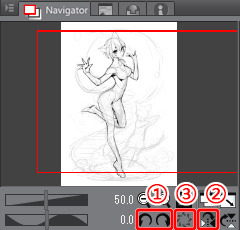 Note: After using [Rotate], click the “Reset rotation” button marked with ③ to revert to the original view.

I’m now happy with the balance. (Canvas is flipped.) 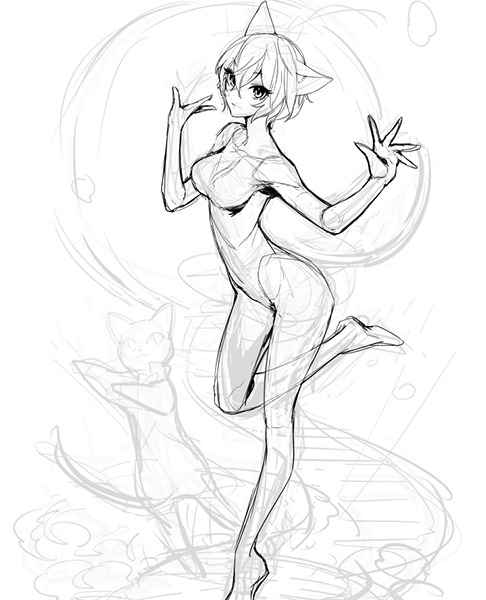 If there are any other points I want to fix, I do so as I add the shape of the clothes.

Here’s what it looks like once I’ve added the clothes. 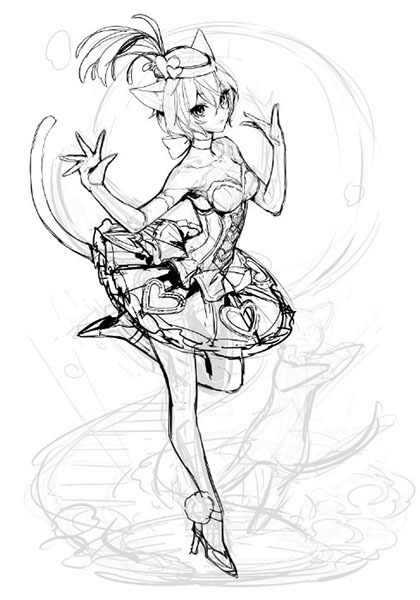 I will organize the layers so that I don’t get confused as I draw.

In the [Layer] palette, I click [New Layer Folder] to make a layer folder. 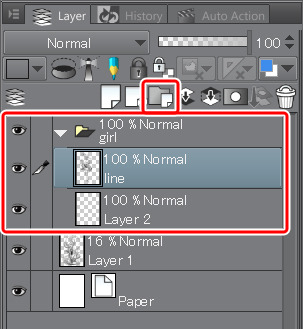 Under the “line” layer, I make another new layer for the color scheme, which I’ll do next.

[3] Creating the color scheme for the character

■ Selection area over the character

First, I’m going to fill in the entire character.

I use the [Auto select] tool on the [Tool] palette and choose [Refer edited layer only to select]. 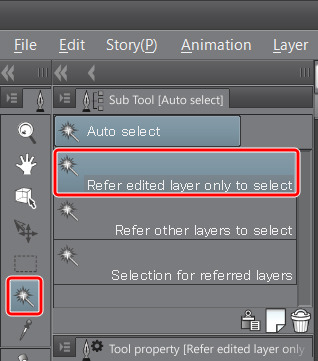 While selecting the “line” layer, I click outside of the outline. 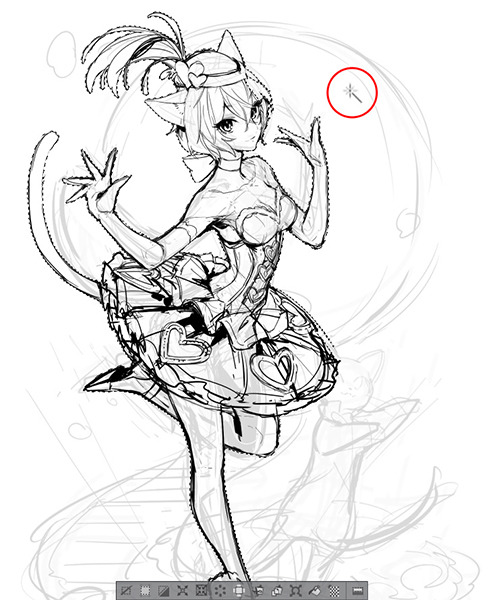 The selection border shows as a dashed line.

Next I’ll change the selection area to within the outline and fill it with color.

I do the following steps after switching to the layer I prepared for the color scheme under the “line” layer. 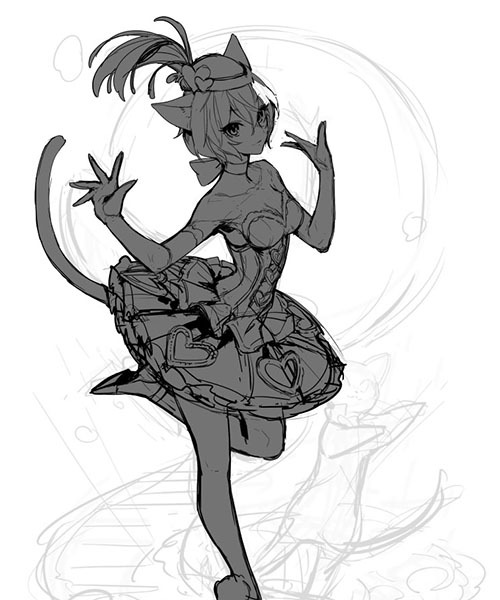 Note: I made it grey so that I could quickly see the filled area.

Part of the bangs weren’t filled because the line was broken so the area wasn’t picked up by the Auto select tool. I fill this area with a brush.

Next I’ll paint colors for each part. Before painting, I change the color of the color scheme layer from gray to skin color.

① While the color scheme layer is selected, I go to the [Layer] palette and turn on [Lock Transparent Pixel].

② When [Lock Transparent Pixel] is on, I choose a skin color from the color wheel or color sliders and use the [Fill] tool.

The parts that were gray are now skin color. 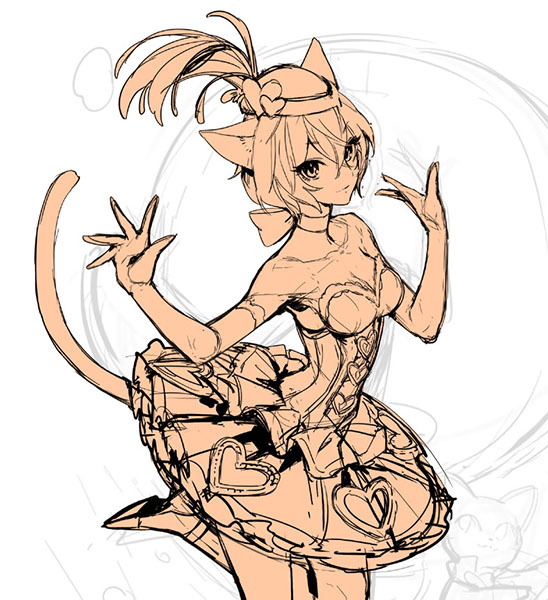 ③ I change the name of the color scheme layer to “1”. 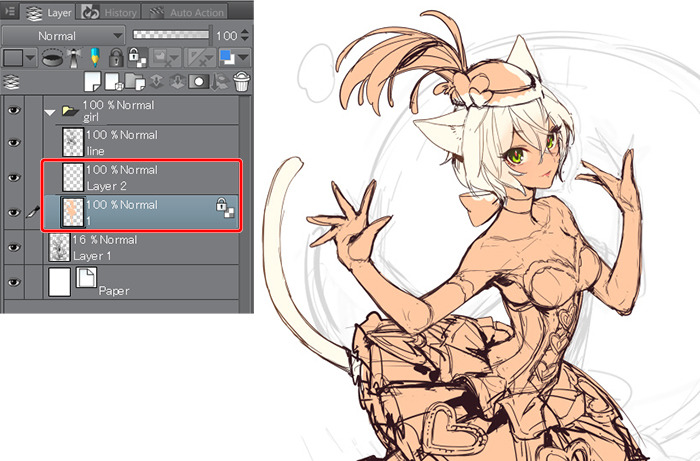 I make new layer on top to add the colors for the parts other than skin.


■ Creating a layer folder for the color scheme

Then I make a layer folder for the color scheme. Under the “line” layer folder, I make a new layer folder called “color”, and move layer “1” and the painting layer into this folder.

Next I make a layer mask in the folder so that I can paint without going outside the lines of the character.

Read the following article to learn how to make layer masks.

① I click the thumbnail icon for layer “1” while holding down the Ctrl key to make a selection area of the drawn parts.

② While selecting the “color” layer folder, I go to the [Layer] palette and click the “Create layer mask” icon.

③ I’ve made a mask over the area of layer “1” in the “color” layer folder. Now when I draw on any layers in the folder, the color won’t go outside of the area of the character. 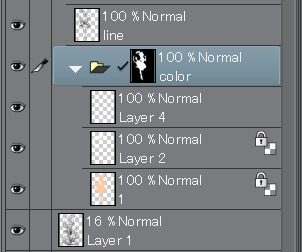 ■ Use clipping to change the color of the lines

I change the color of the lines to brown to make the image look a bit softer.

I make a fill layer in brown, then move it above the “line” layer and set it to “Clip at layer below”. 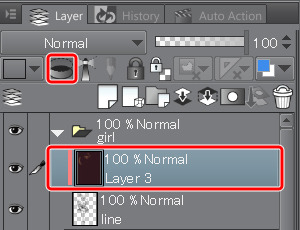 I add colors to the costume while checking the original design I made.

Once I’ve finished adding colors, I turn on [Lock Transparent Pixel] so that I don’t accidentally draw on this layer again. 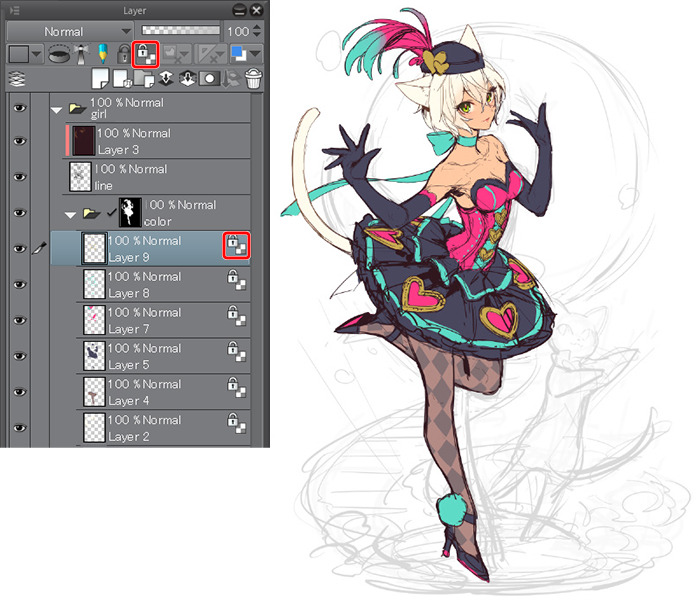 Now I’ve finished the color scheme for the character.

I add the rough lines and color scheme for the cat using the same process as for the girl.

While drawing the lines, I moved the position of the cat slightly to the right so that it didn’t overlap with the girl. 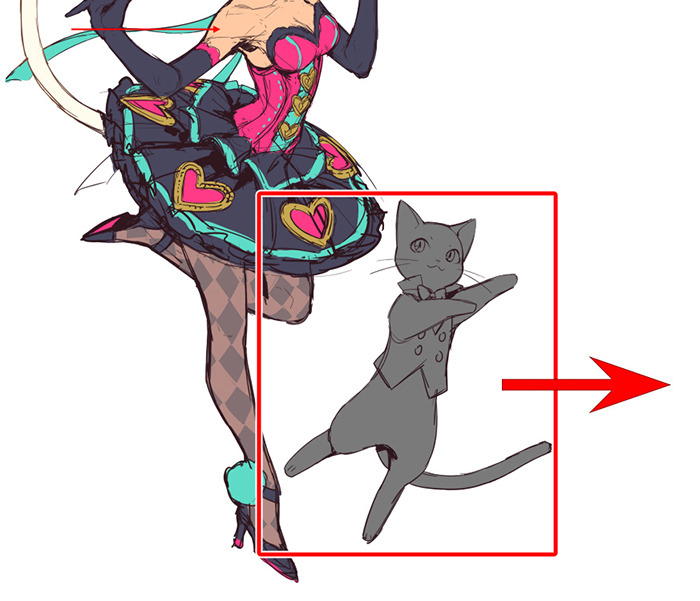 So that I can easily tell which layers are for the girl and which are for the cat, I separate them into two folders.

Like when drawing the girl, I change the lines of the cat to brown by clipping a fill layer above the “line” layer.

The color scheme layer is also stored in the "color" folder in the same way, and I mask the folder so that the color stays within the lines.

When drawing an animal standing on two legs, you should make the torso slightly longer than usual to create a good balance.

For the cat, I tried to draw a soft pose with curved lines.

The girl’s clothes have a black base, so I made the cat’s vest white for contrast. 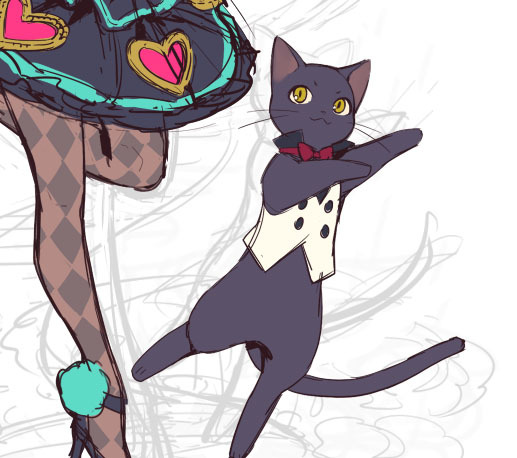 I’ve finished coloring the cat, so next I’ll move on to the background.

For the background, I use the same process of drawing the rough lines, making a selection area and filling it, then adding color. 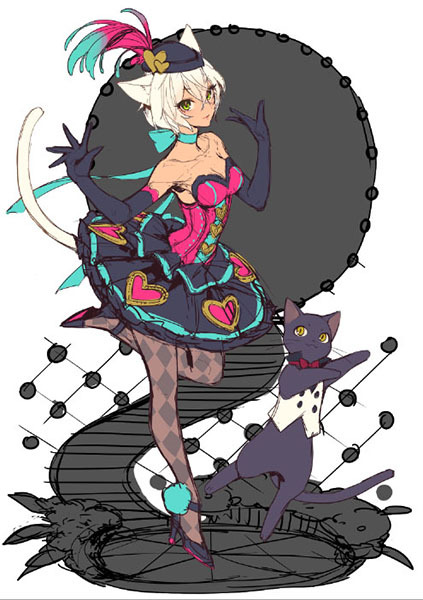 I won’t draw as much detail for the background, so I clip the color scheme layer above the “1” layer. 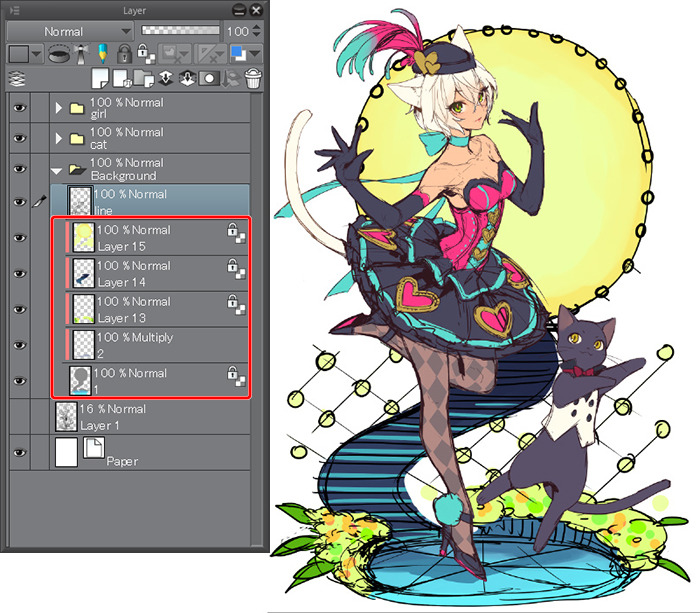 I also change the color of the lines again.

I want these lines to appear lighter than the character lines, so rather than changing them to brown, I change them to a color slightly darker than the color of each object. 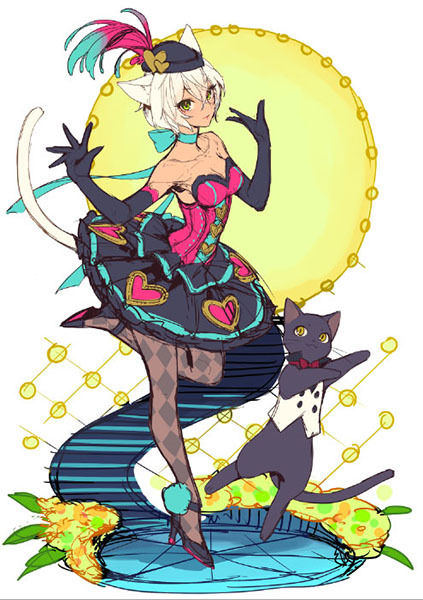 I duplicate the “girl” folder, then go to the [Layer] menu > [Combine Selected Layer] to flatten the folder to a single layer. 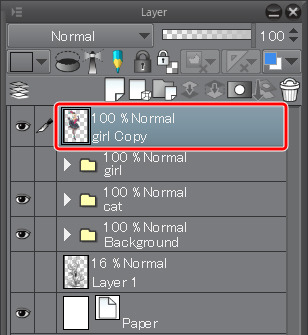 I click the eye icon to the left of the “girl” layer folder to hide it.

By flattening the lines and color for the girl into a single layer, I can easily make adjustments to the face size, eye balance, and skirt design using the [Selection pen] and [Transform] tools. 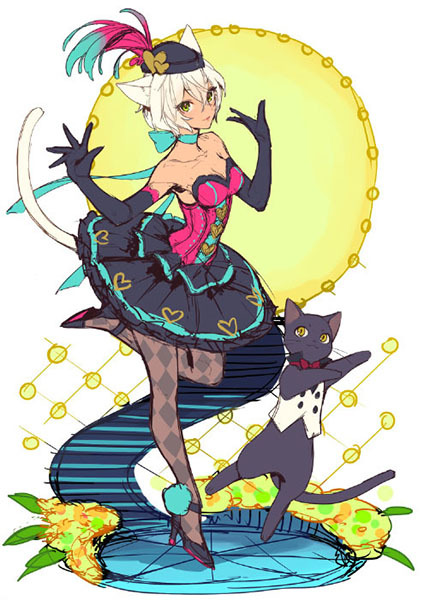 Because the overall piece became busier, I decided to make the design on the skirt smaller and simpler.

So that the lights in the background stand out, I made new layer at the bottom and filled it with a dark color. 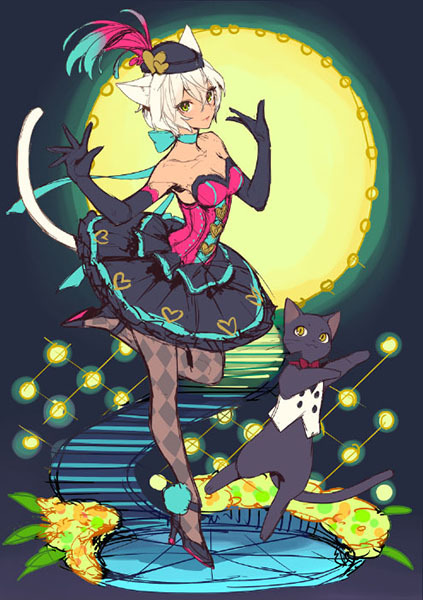 I used the [Transparent watercolor] with the following settings to blend the colors. 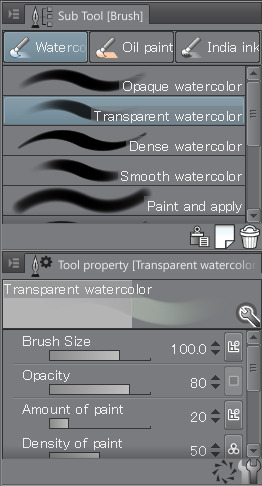 Now I’ve finished the rough lines and the color scheme.

Next, I’ll add the line art.