[1] Preparing to draw the line art

I will prepare a couple of things before I start drawing.

After drawing the rough lines, I increase the canvas resolution again.

I go to the [Edit] menu and select [Change Image Resolution] to open the dialog box.

I change the resolution to 350 dpi for printing.

Just to check, I change the unit to mm and check that the canvas is 210 mm in width and 297 mm in height for A4 size.

I will organize the layers again before I start the line art.

① I divided the layers into folders for "girl", "cat", "background", "bg" and flatten each folder into a single layer.

To flatten layers, select the layers you want to combine, then go to the [Layer] menu > [Combine Selected Layer].

Note: You can use this command when there are multiple layers stacked in the layer palette.

Then, I move all the flattened layers to a new folder called “rough version”. 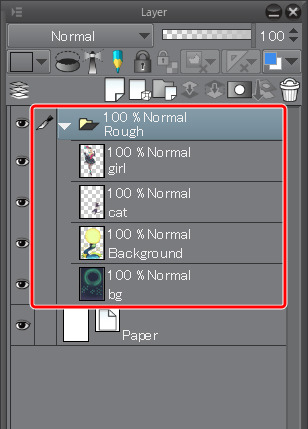 ② I select the “rough version” layer folder and reduce the opacity to 29%. 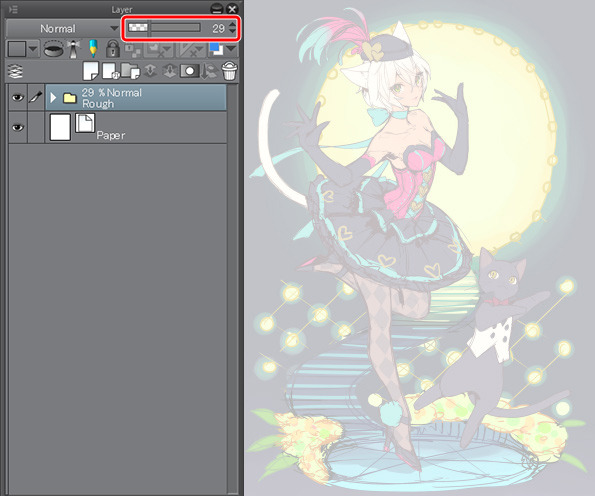 ③ Next, I prepare to draw the line art.

I make a folder for the "girl", "cat", and "background", and then make "line art" and "color" folders inside each.

Hint: Backing up your work

Although flattening the layers reduces the number of layers and makes the file easier to manage, it makes it harder to make adjustments later.

Before flattening the layers, I go to [File] > [Save as] and save the data. 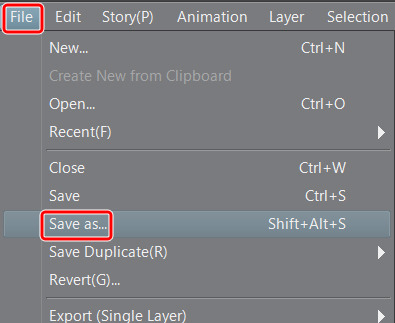 As in the case of the rough lines, I increase the minimum value of [Pen Pressure] a little so that I can draw smooth lines. 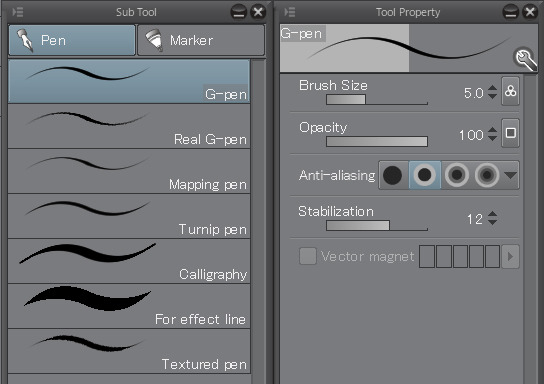 I draw the lines for each part of the character on a separate layer.

By broadly separating layers at the line art stage, it will be easier to adjust the shape and color of the parts later.

I make a new layer in “line art” folder within the “girl” folder to draw the face.

I called the layer “face”.

The highlight on the eyes is an important element to direct the gaze, so I draw it on a different layer that I call “h”. 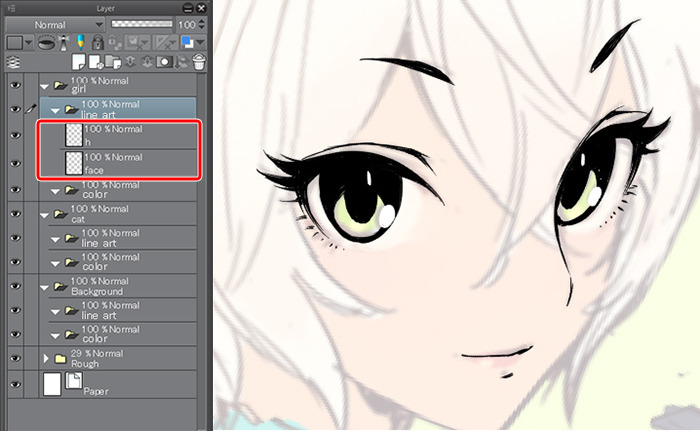 When I add the highlight in the same place as the rough version, the character’s gaze isn’t looking forward properly, so I adjust it slightly to match up with the lines on the “face” layer.

I then draw the body and the hair on different layers.

I’ll draw the hair and ears on the "hair" layer, and draw everything below the jaw on the "body" layer.

Now I’ve finished the line art for the head. 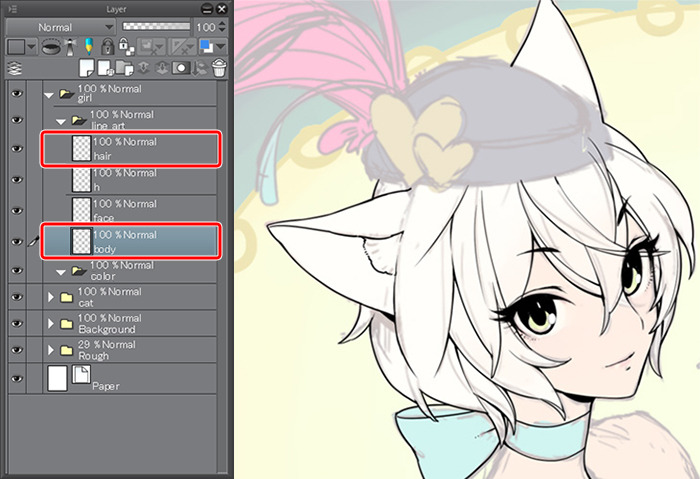 Rather than drawing each strand of hair in detail, I draw smooth lines to represent the segments and flow of the hair.

In this drawing, I focused on the change in volume from the root to the tips and the lightness of the hair.

I make a new layer above the “hair” layer to draw the hat. 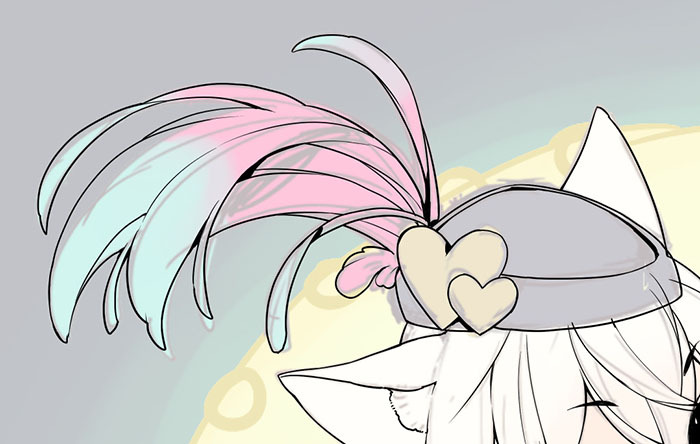 I drew the lines for the hair on a different layer, so it doesn’t matter if they overlap.

When you aren’t confident about drawing a certain shape smoothly, it’s best to make a new layer to draw on so that you don’t have to worry about overlapping lines and can reduce the amount of lines that you need to fix. 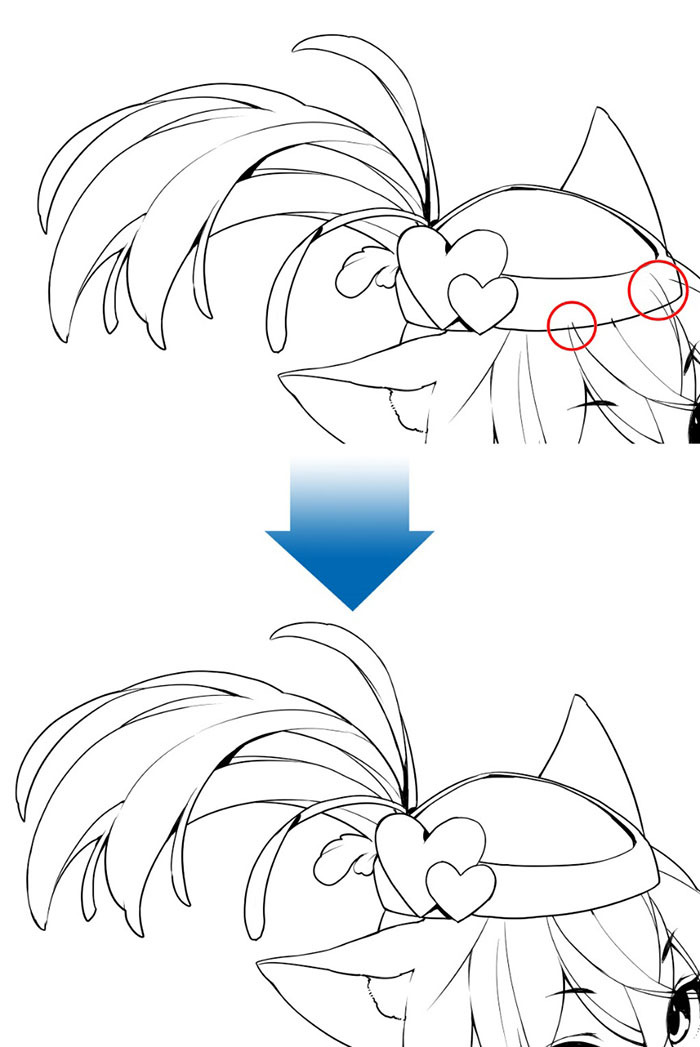 I wanted the feathers decorating the cap to have a round fullness to the ends, unlike the strands of hair.


■ Merge the hat and hair layers

When it won’t cause difficulty for later stages, I tend to merge layers for different parts.

In this example, I merged the hat layer and the hair layer, and changed the name to “head”. 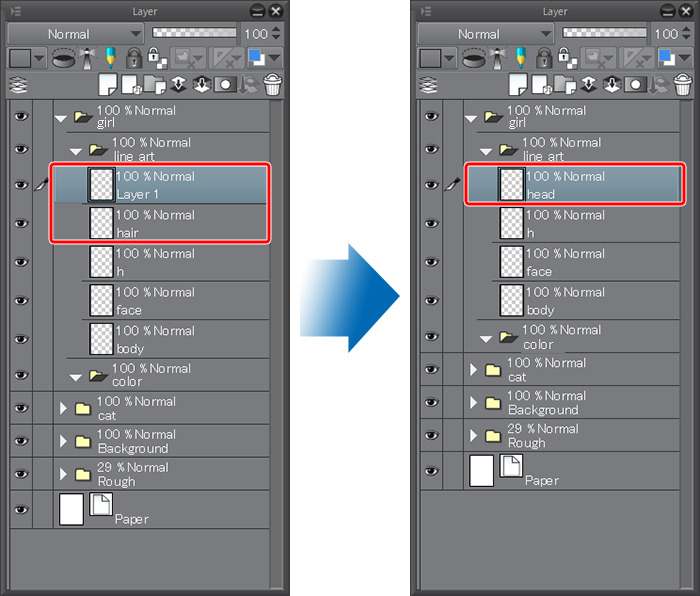 Next I’ll ink the costume.

Just like when drawing the hat, I draw the heart-shaped fasteners on a separate layer from "body".

It’s hard to draw on top of other line art, so I reduce the opacity of the “body” layer to draw the hearts. 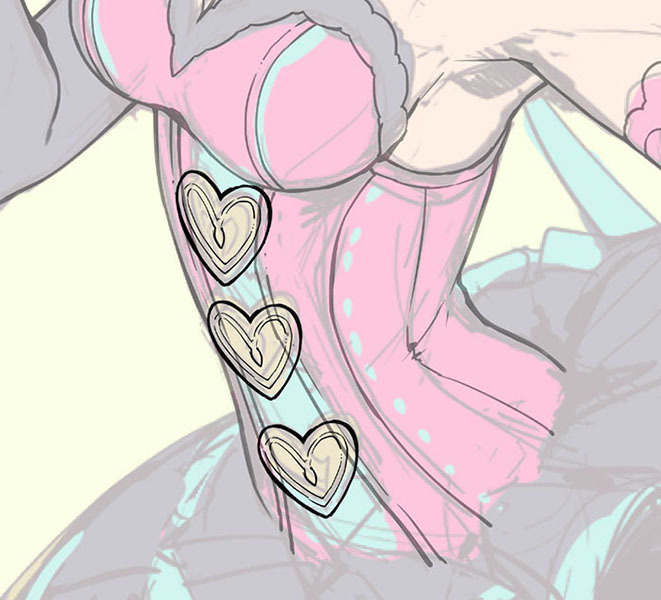 After drawing one heart-shaped fastener, I use the [Selection] tool > [Rectangle] to select the line art, then copy and paste it.

Then, I use the [Transform] > [Free Transform] tool to transform the duplicated fasteners to align with the body shape and perspective. 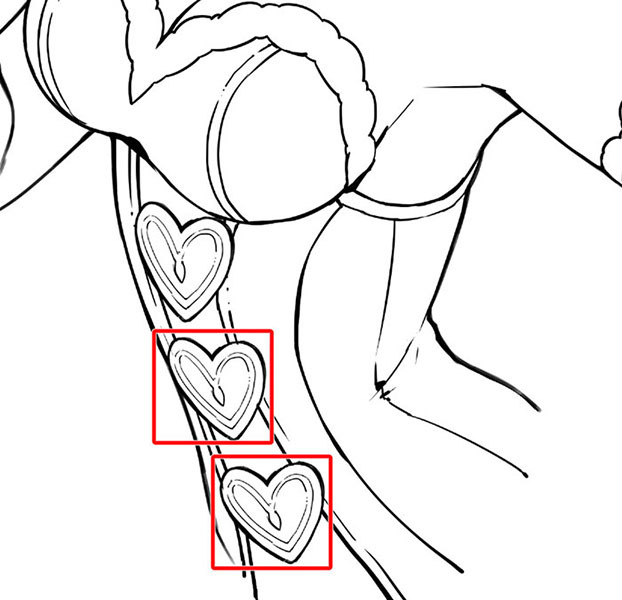 Once I’ve finished, I merge the layers for the fasteners and the “body” layer like before.

Next I’ll draw the skirt.

As before, I draw on separate layers and erase the lines that I don’t need afterward.

The frills are particularly hard to draw.

If you aren’t good at drawing frills, it can be helpful to draw them on a different layer so you can redraw them as much as you like.

I also merge the skirt layer into the "body" layer after erasing the extra lines.

The legs are the last part to ink on the girl.

In this illustration, the legs help to guide the viewers’ gaze.

I try to draw a beautiful silhouette.

Rather than trying to draw a perfectly clean line in one go, it is easier to adjust the shape by adding and erasing the lines. 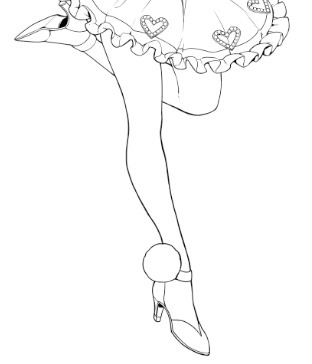 I thicken the outline with the [Darker pencil] to finish inking the girl. 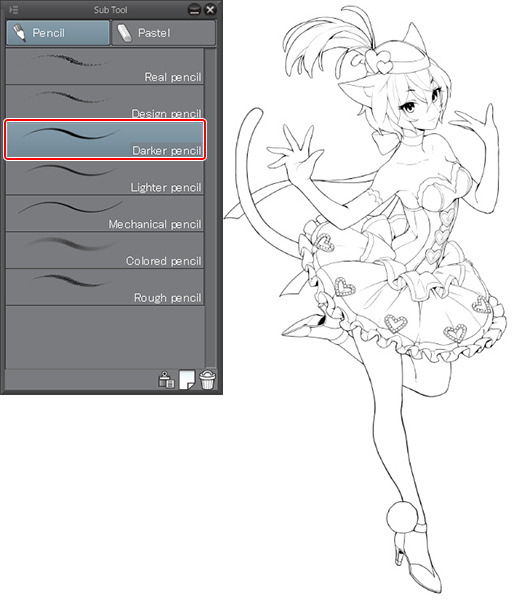 [New window] is useful when you want to work while seeing the entire canvas.

Go to the [Window] menu > [Canvas] > [New Window] to open a new window that shows the active canvas.

You can set the windows to different magnifications, so you can display the entire canvas in the new window while working on a zoomed-in area on the active canvas. 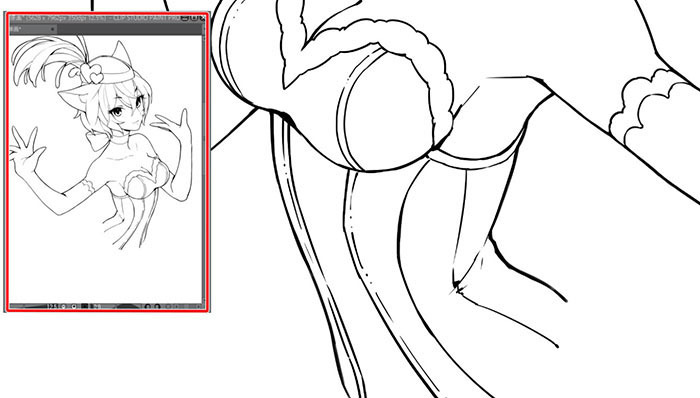 Next I’ll ink the cat. I draw smooth curves for the shape of the cat.

The cat doesn’t have as many separate parts as the girl, so I split it into the "face" layer (eyes, mouth, and whiskers) and "body" layer. 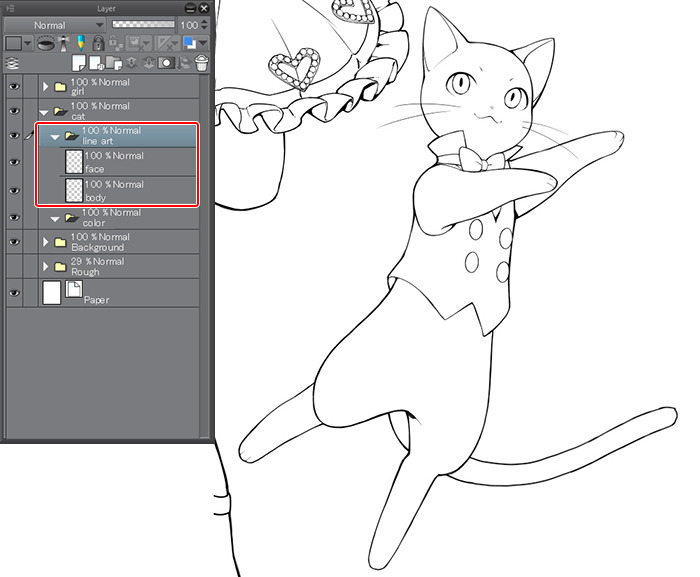 Next I’ll move on to inking the background.