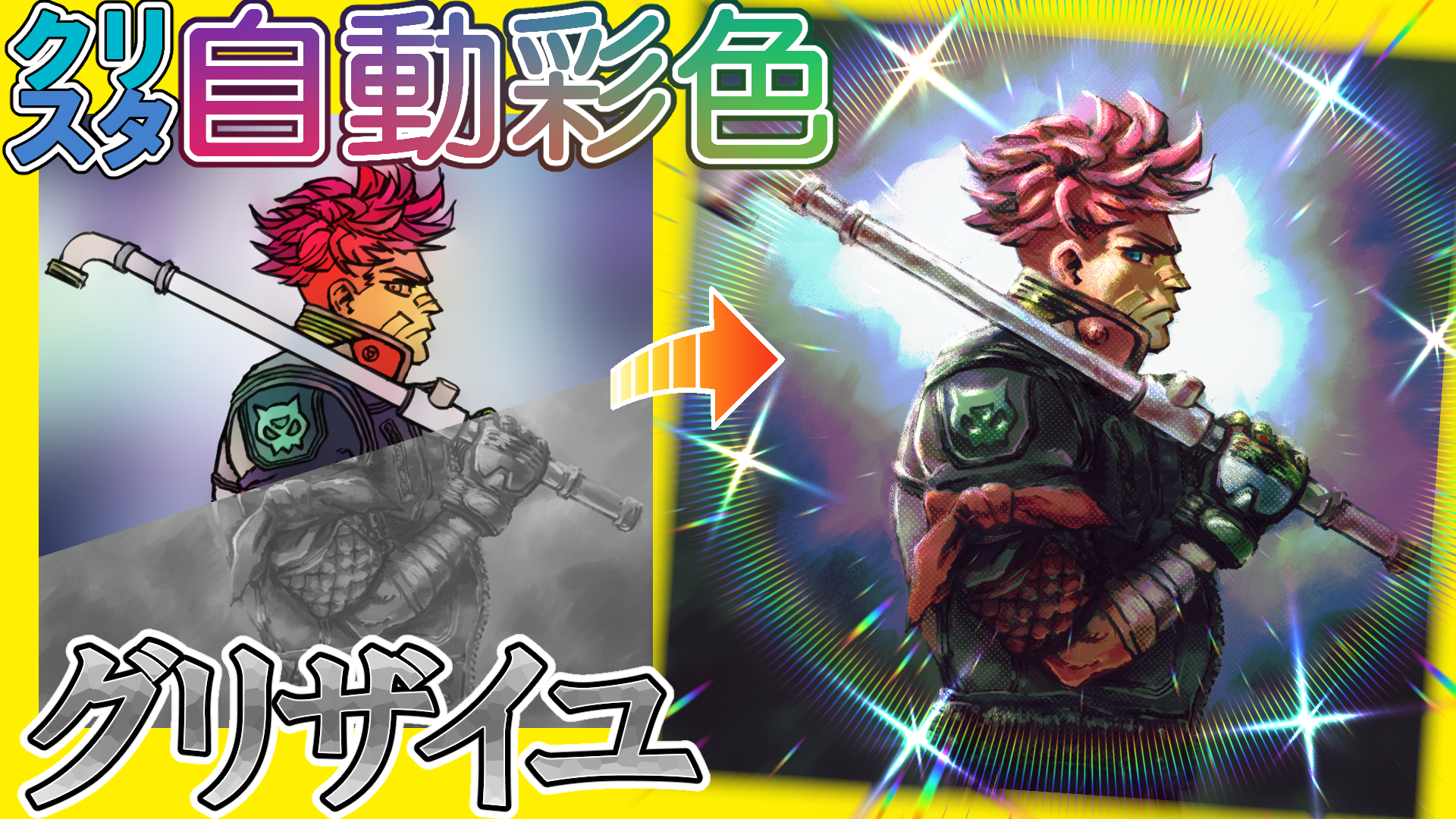 Hello everyone!
This is JAHANA.
This time, we will introduce an illustration technique that combines the automatic coloring function of CLIP STUDIO PAINT with the Grisaille method.
I tried my best to make a video this time, so if you like it, please take that as well! 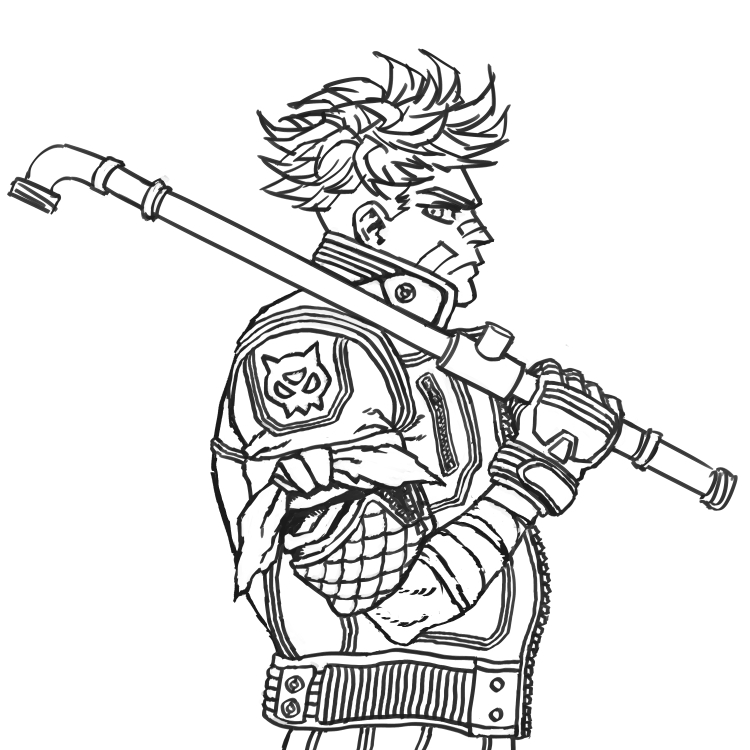 How to use [Fully automatic coloring] 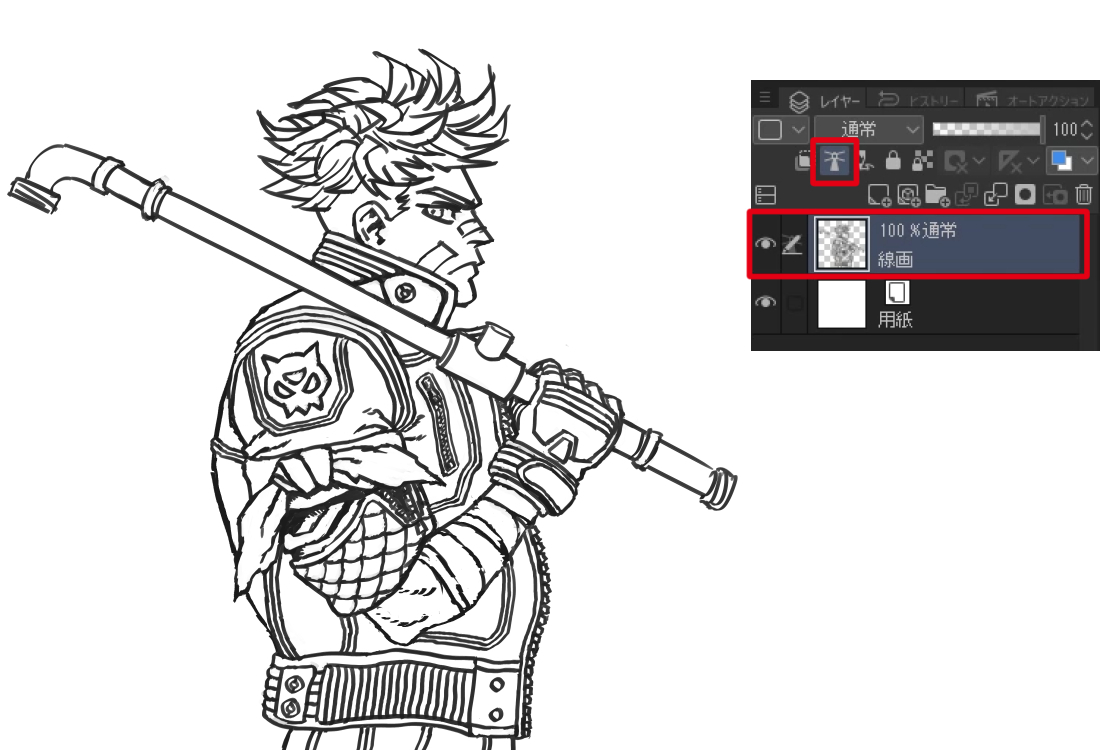 Then, from the Edit menu, select [Automatic coloring (preceding preview)] → [Full automatic coloring].
Then, a raster layer that is automatically colored is created on the line drawing layer.
The color will be different from what you expected, but don't worry about it.
For now, we'll leave the layer hidden as we'll be using it for finishing. 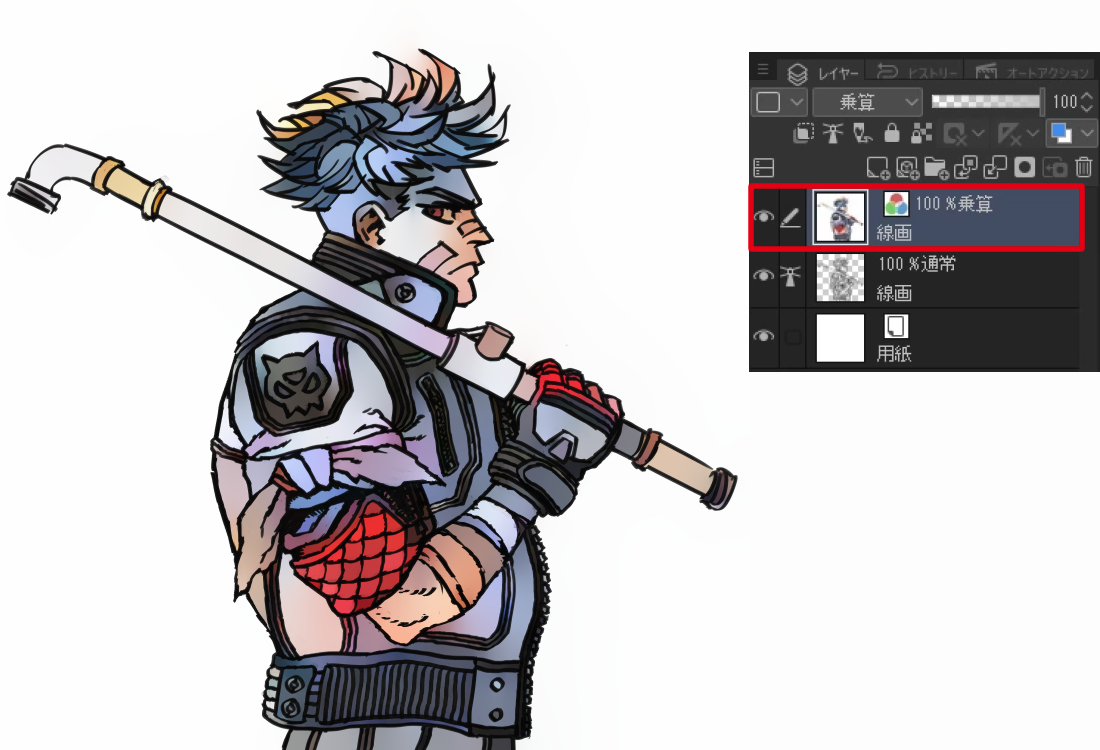 How to use [Color with hint image]

Now let's use the [Coloring with hint image] of the automatic coloring function!
Below the line drawing, add a new raster layer and paint it with a hint color.
In some places it may be faster to use the fill tool instead of the pen.
Not only the color of the characters, but also the background color.
We will put various colors close to the colors used for the character with good rhythm.
By doing this, a beautiful gradation is created when automatic coloring is executed. 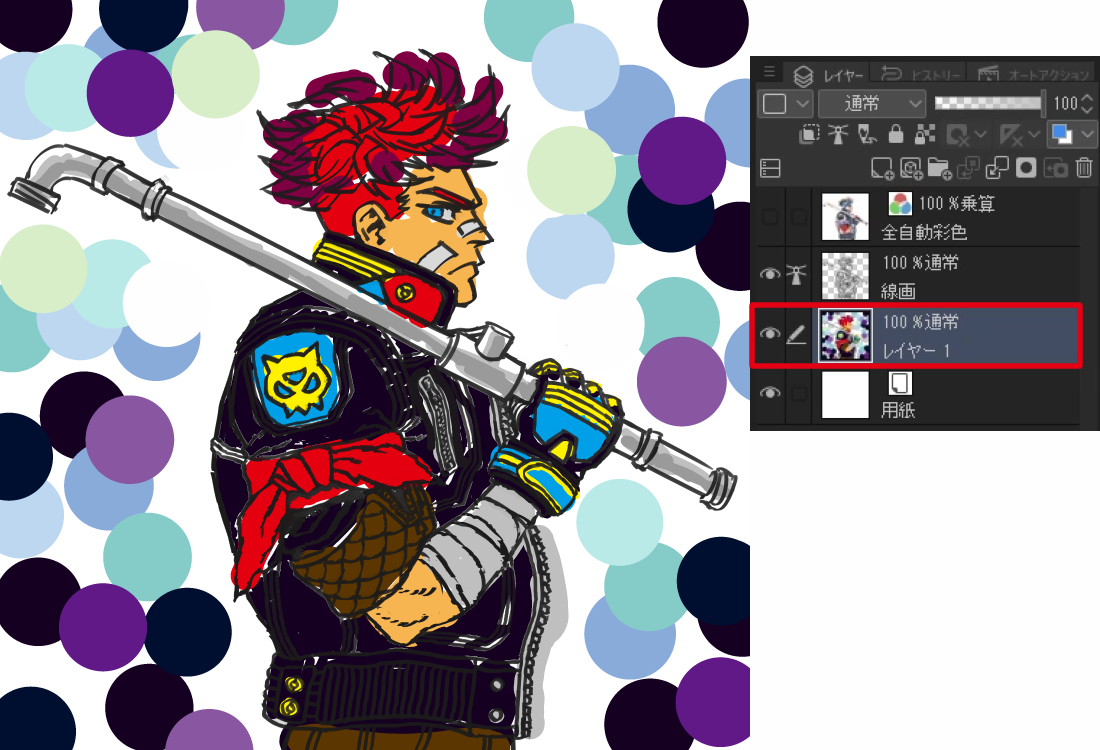 When the color is painted to some extent, select [Auto Coloring (Preliminary preview)] → [Coloring with hint image] from the edit menu.
A raster layer colored by the hint image is generated on the line drawing layer.
It's a pretty interesting color!
The background gradation is also pretty good!
This hint coloring layer is not used now, so let's hide it. 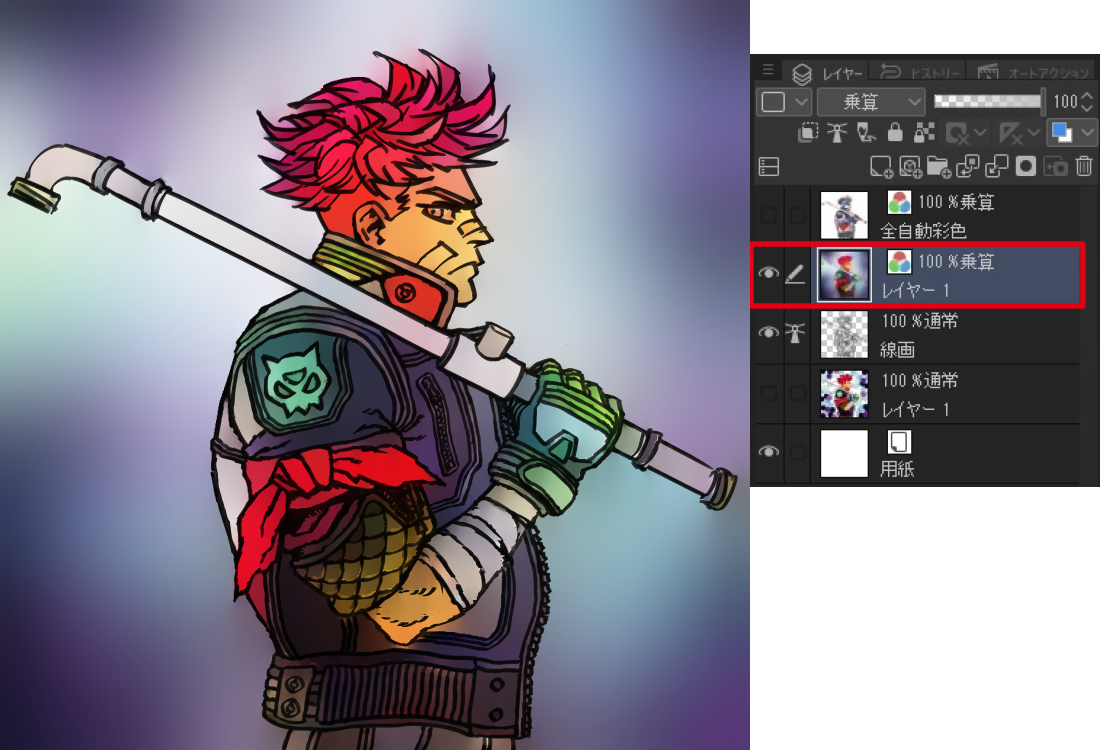 This time, I will try to use the colors created by automatic coloring as much as possible.
Let's spend some time on the shadows and add depth to the illustrations.
This time, I would like to add shadows using the Grisaille method.
The Grisaille method is a method in which a layer is placed on top of a layer shaded in gray and another layer is used.
Add a new raster layer below the line drawing to add shadows to the person and background. 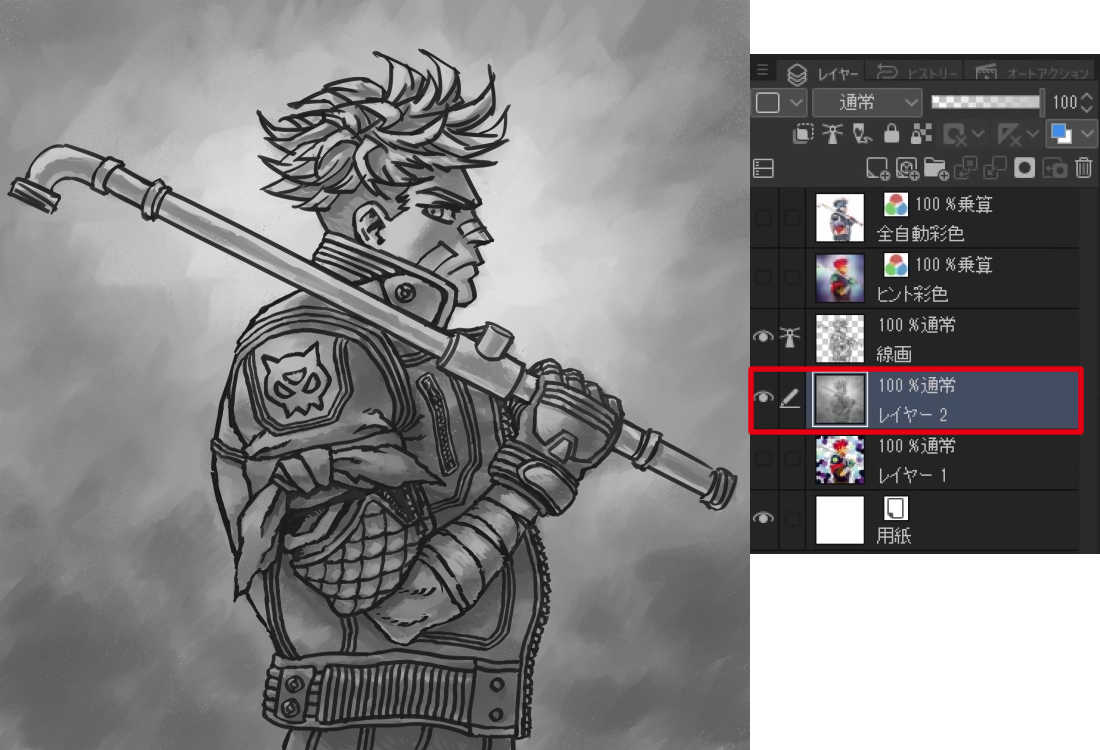 I cast such a shadow on the assumption that the light source is slightly behind the person.
Working time is about 30 minutes.
Oily flat brushes, gouache, oil pastel, and other types of brushes that give you the best possible touch will give you a better appearance when overlapping the auto-colored colors.

It is okay to proceed to coloring work as it is, but let's apply the line drawing as if it were a thick paint because it is a great deal.
Add a new raster layer above the line drawing.
Once added, press the clipping button (just to the left of the lighthouse mark button).
By clipping, colors can be overlapped without protruding from the line drawing.
By doing this, you can adjust the lines without worrying that the shadow will be disturbed.
As with the previous work, we will also paint in gray while paying attention to the direction of the light.
It is OK if you paint it as follows. 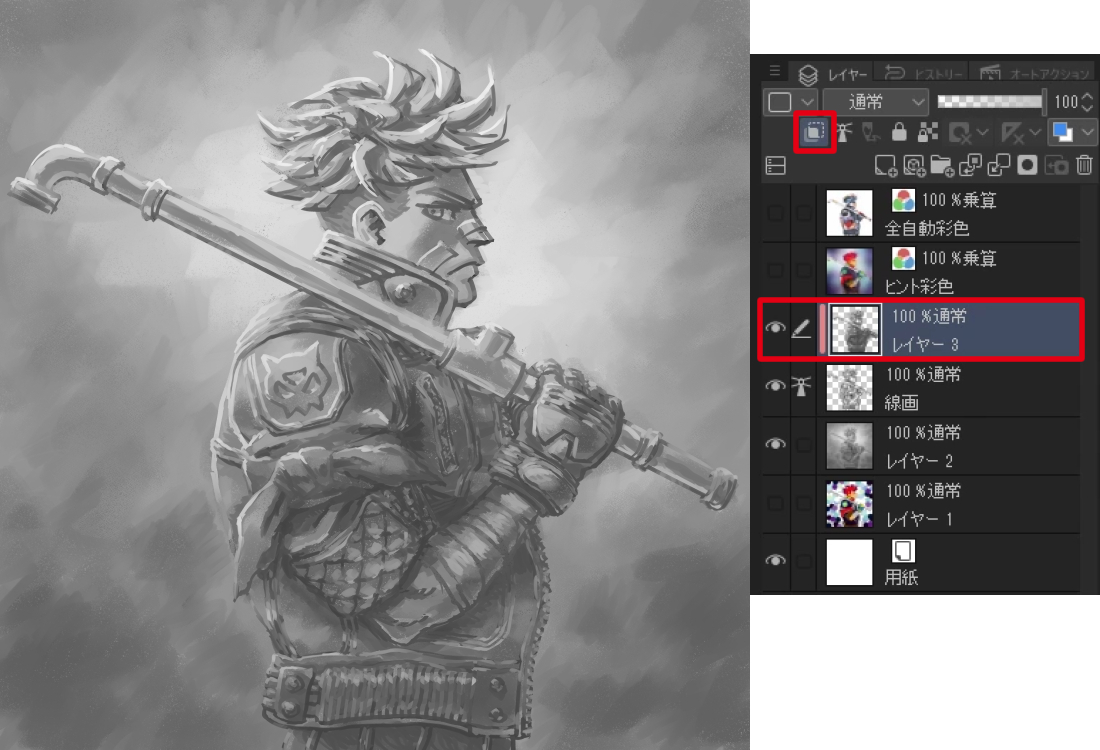 From here, it's finally time to finish the work with the two layers created with automatic coloring.
First, display the hint coloring layer that was hidden.
Then, change the composite mode from [Multiply] to [Burn Linear].
You can set the opacity to your liking, but here we set the opacity to 55%. 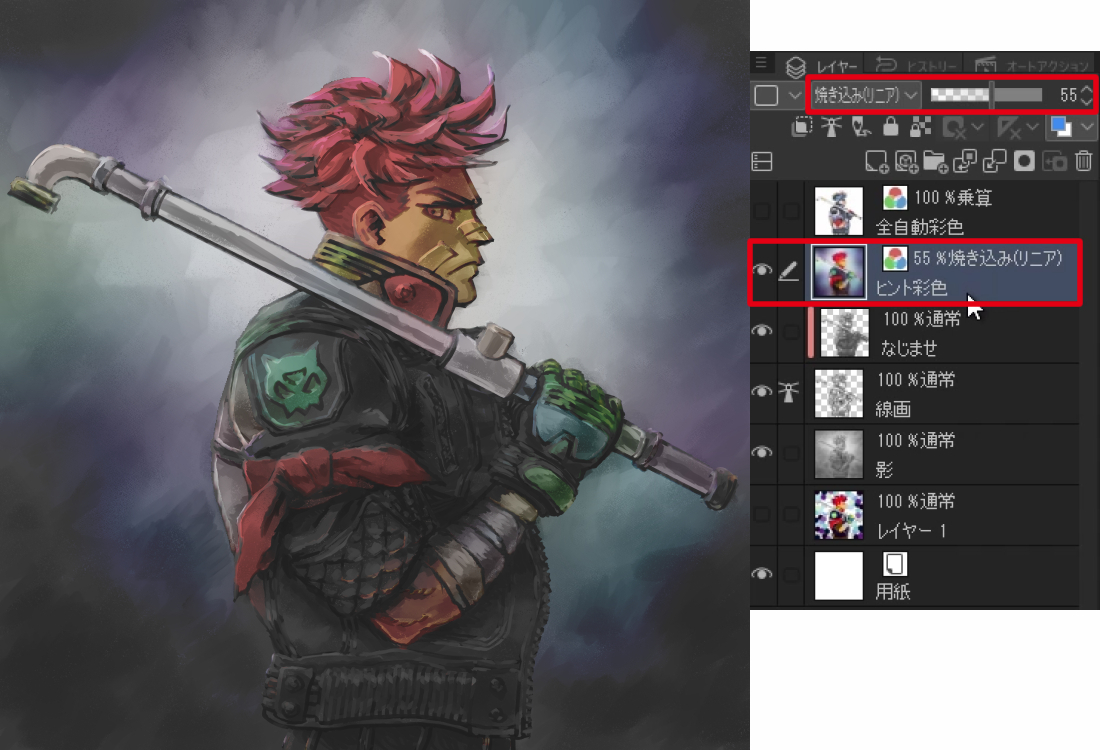 Next, add the tone curve of the tonal correction layer above the hint coloring layer.
Operate the tone curve with ad lib and adjust to obtain the desired color.
The adjustment of the tone curve largely depends on personal preference, but I set it so that the colors and shadows are sharp.
Adjust the colors so that they have a complementary relationship, or adjust so that there is a difference between the background and the light and shade so that the person appears upright.
The image of the adjusted tone curve is shown below for clarity. 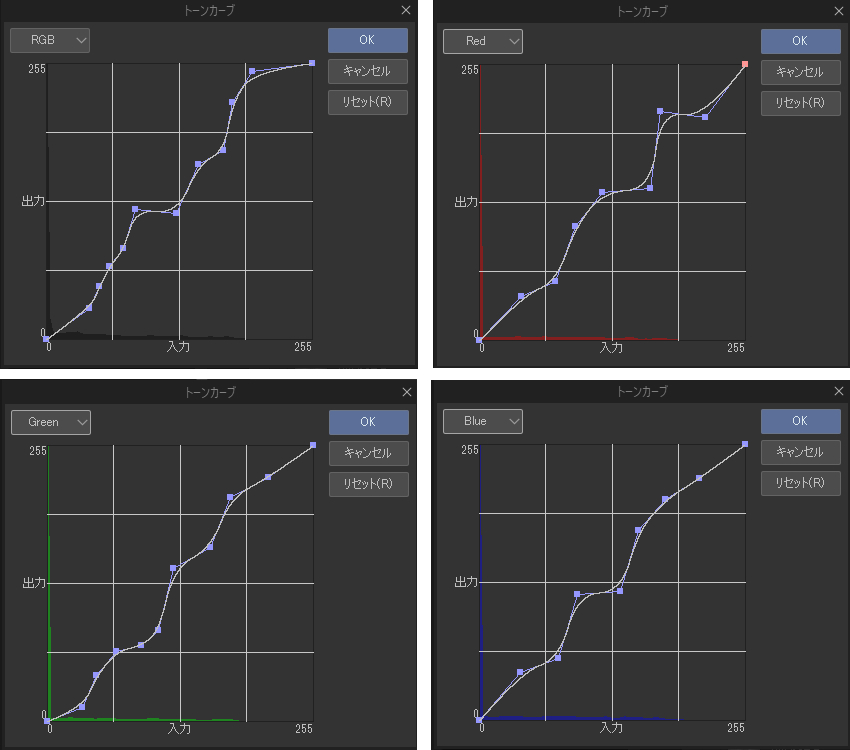 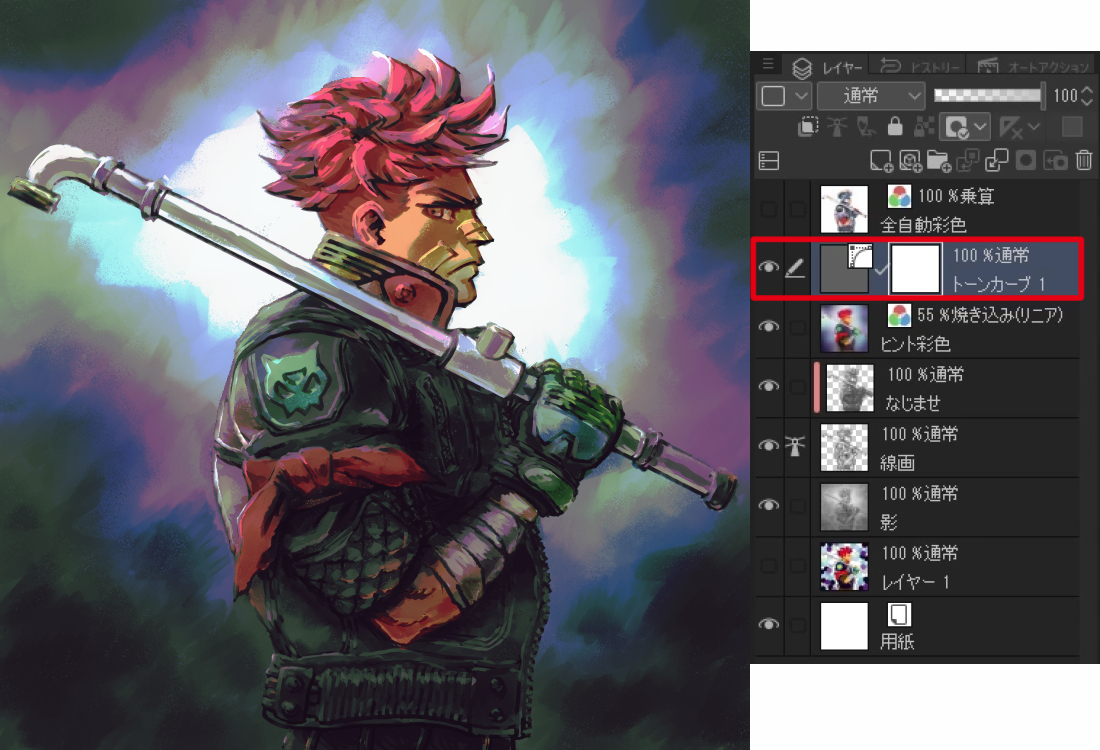 The color changes intricately, giving a very dramatic impression!
This is the completion ... I want to go, but there are still layers that have been fully colored automatically.
Now let's add pop-art Lichtenstein-like effects using fully automatic coloring layers! 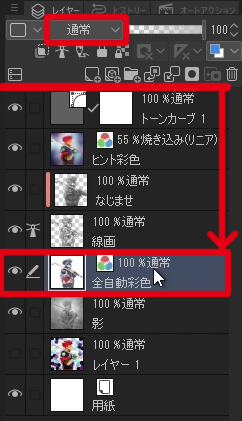 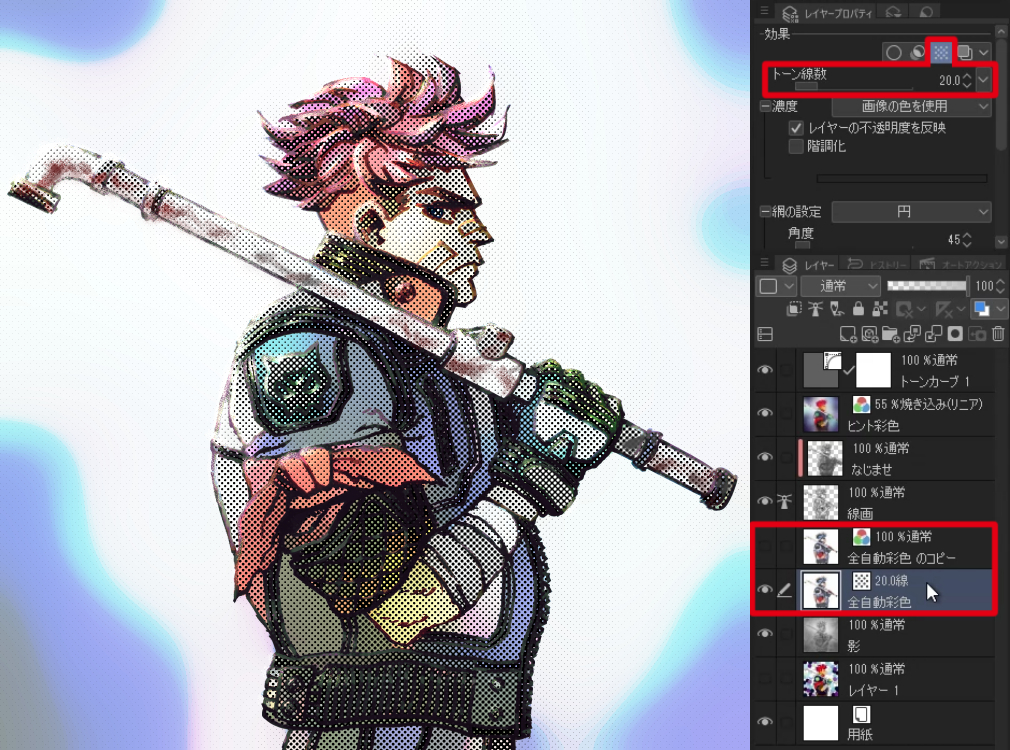 The black tone is now applied to the character.
However, in this state, the color cannot be reflected in the tone.
First, you need to rasterize the toned layer.
To rasterize, select the [Layer] menu → [Rasterize] or right-click → [Rasterize] while selecting the fully automatic toned layer in the layer window.

After rasterizing, change the expression color from layer properties to [Color] → [Gray] again.
Then press the black square button [■] next to it to make the drawing color black only.
Next, display the copy of the fully automatic coloring layer that was hidden, and press the clipping button.
Then the colored halftone will be applied to the character. 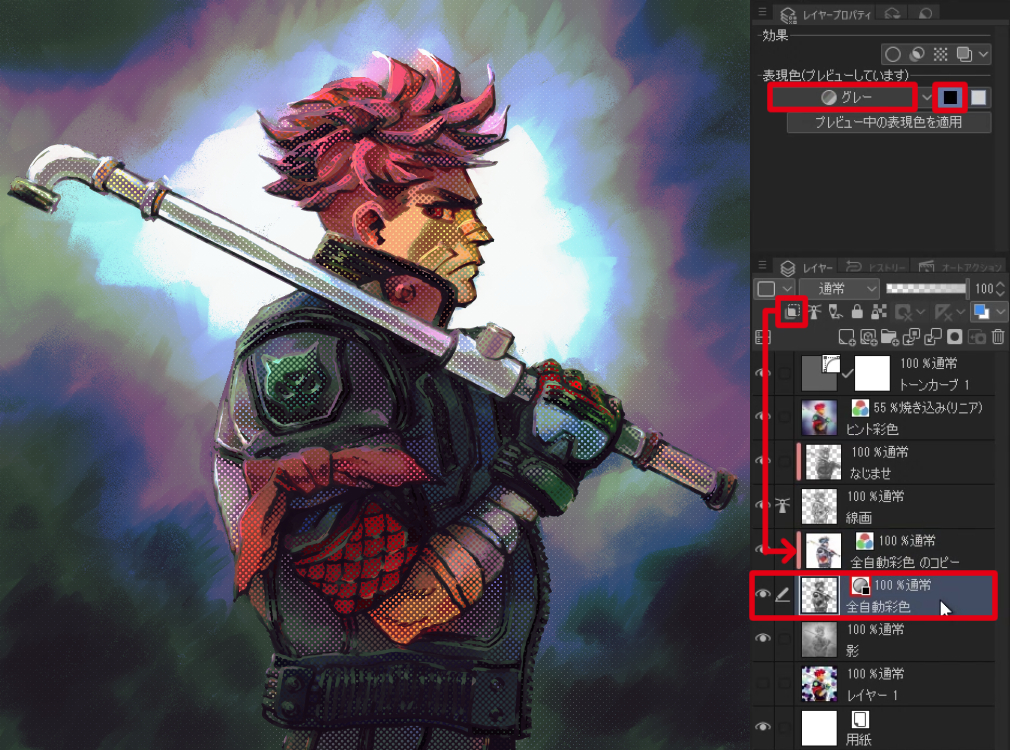 I think this is an interesting expression as it is, but I strongly feel the halftone claim.
Therefore, change the composition mode of the layer that has been toned from [Normal] to [Soft light].
Don't you think that the light halftone is casually fashionable? 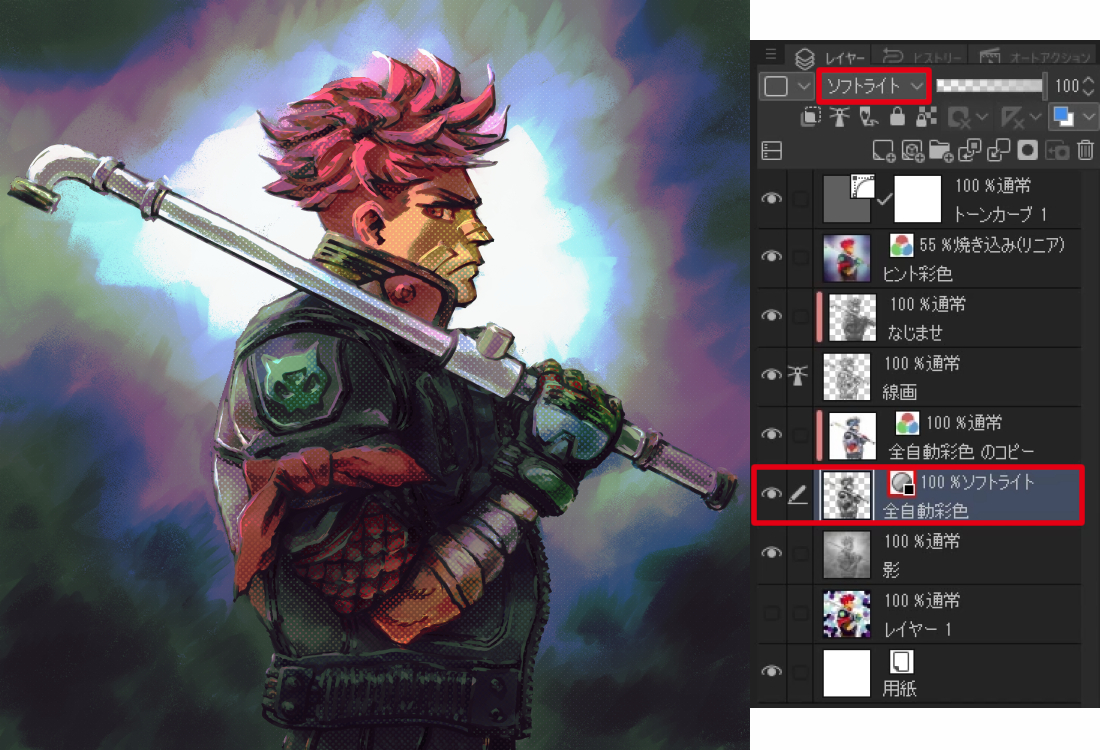 To finish, we erased the halftones on the skin and added highlights, dirt on the iron pipe, and eye color.
This completes! 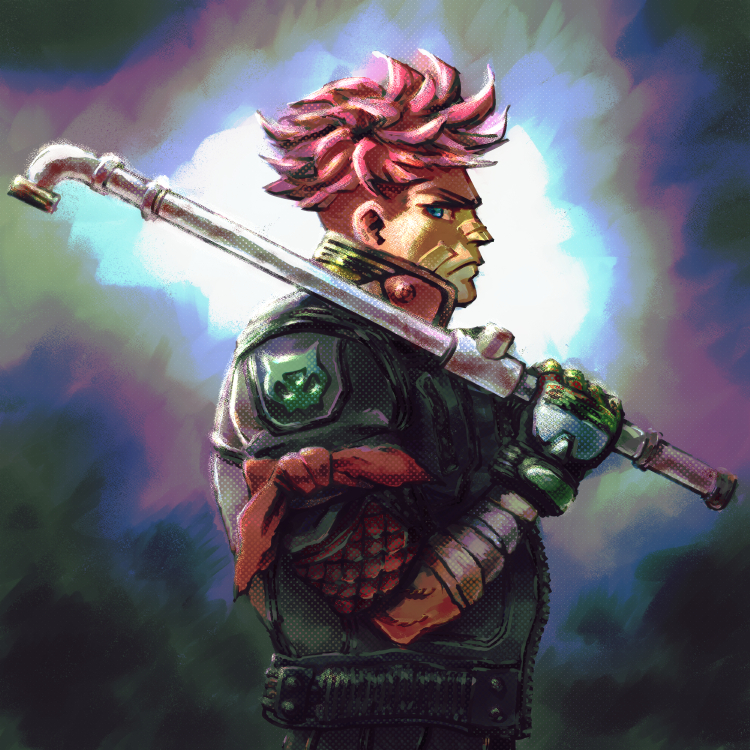 Other Tips from JAHANA