First I’ll block out the colors to separate each part before painting.

In the color blocking stage, I create a layer folder and create new layers inside it like for the line art.

I’ll make a new layer for each element or part.

Since there are a lot of small items that I’ll paint different colors, I separate them into different layer so that the colors don’t overlap.

I also separate the different colors on the character’s clothes. 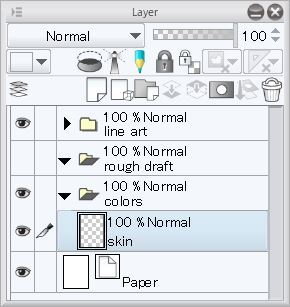 For the color blocking, I used the [Fill] tool → [Refer other layers].

“Refer other layers” fills color by referring to information on all visible layers.

I also use the [Pen] tool > [Mapping pen] for small areas. 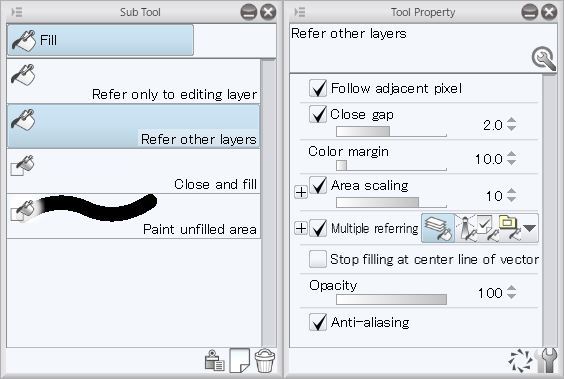 I start by coloring the character.

I hide all layers except for the layers with character lines so I can fill the colors more easily. 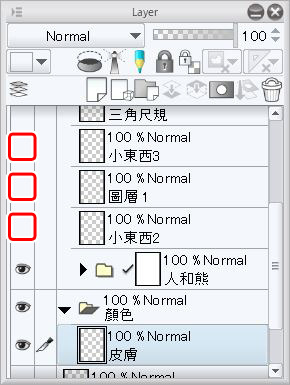 For color blocking, I don’t choose the color I want the picture to be at the end. Instead I use bold colors such as pink so that I can make sure there are no missed areas. 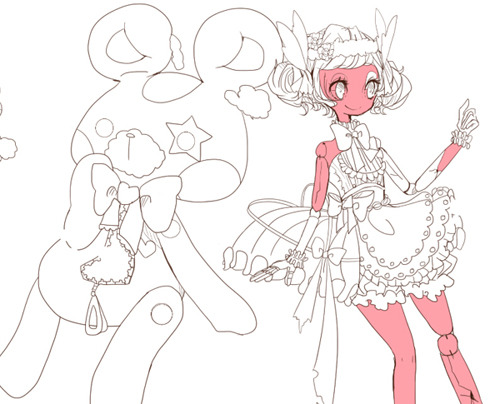 These are the layers I use for blocking the character, bear, and balloons. After I finish each layer, I lock the transparent pixels. 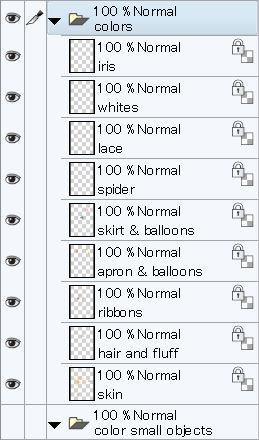 After color blocking, I’ll decide the color of the skin and clothes. At this point the color scheme becomes roughly fixed, but I may change some parts later.

For each color-blocked layer, I use the [Edit] menu > [Tonal Correction] > [Hue/Saturation/Luminosity] and change the values to adjust the colors.

Using the [Tonal Correction] > [Hue/Saturation/Luminosity] feature, you can change the color of a layer using sliders for hue, saturation, and luminosity, three integral properties of color.

Adjust the color of the image by changing the [Hue], [Saturation], and [Brightness] sliders in the dialog box.

This refers to the color tone. The slider adjusts the tone of the color, such as red, blue, and yellow.

This changes the vividness of the color. The higher the value, the more vivid the colors become. Lower values make the colors grayer.

This changes the brightness of the color. The higher the value, the brighter the colors become. It becomes completely black at -100 and completely white at 100.

I use [Tonal Correction] > [Hue/Saturation/Luminosity] to change the pink skirt to a navy shade.

I thought that pink was also cute, but decided that navy suited the overall illustration more. 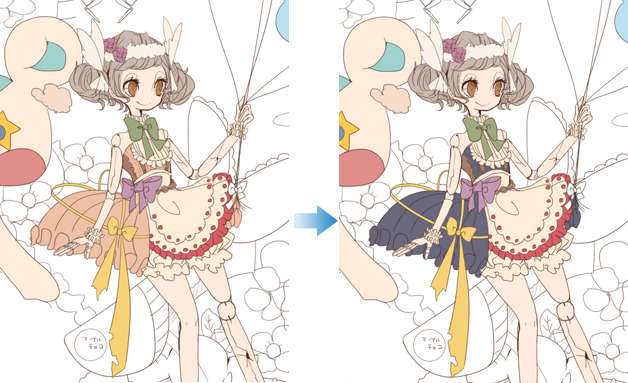 I color block the objects behind the character in the same way, then adjust the colors while checking the overall balance.

Although time-consuming, I repeatedly paint the colors as I imagine them, then adjust the color scheme.

I make the colors in the [Color Wheel] palette. I first pick roughly the color I’m imagining, then make slight adjustments until it’s what I want.

I don’t like the saturated colors in the upper right corner of the color picker, so I tend to choose colors from slightly above or to the left of center, or slightly down and left.

Depending on my idea, I try to make sure small parts aren’t standing out too much, and that the color scheme is well-balanced overall. 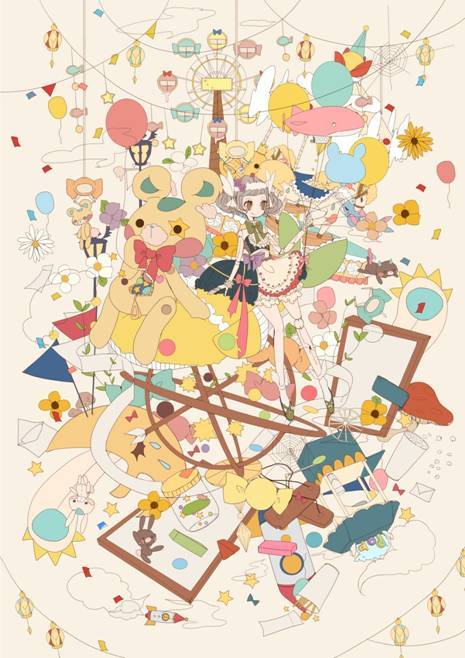