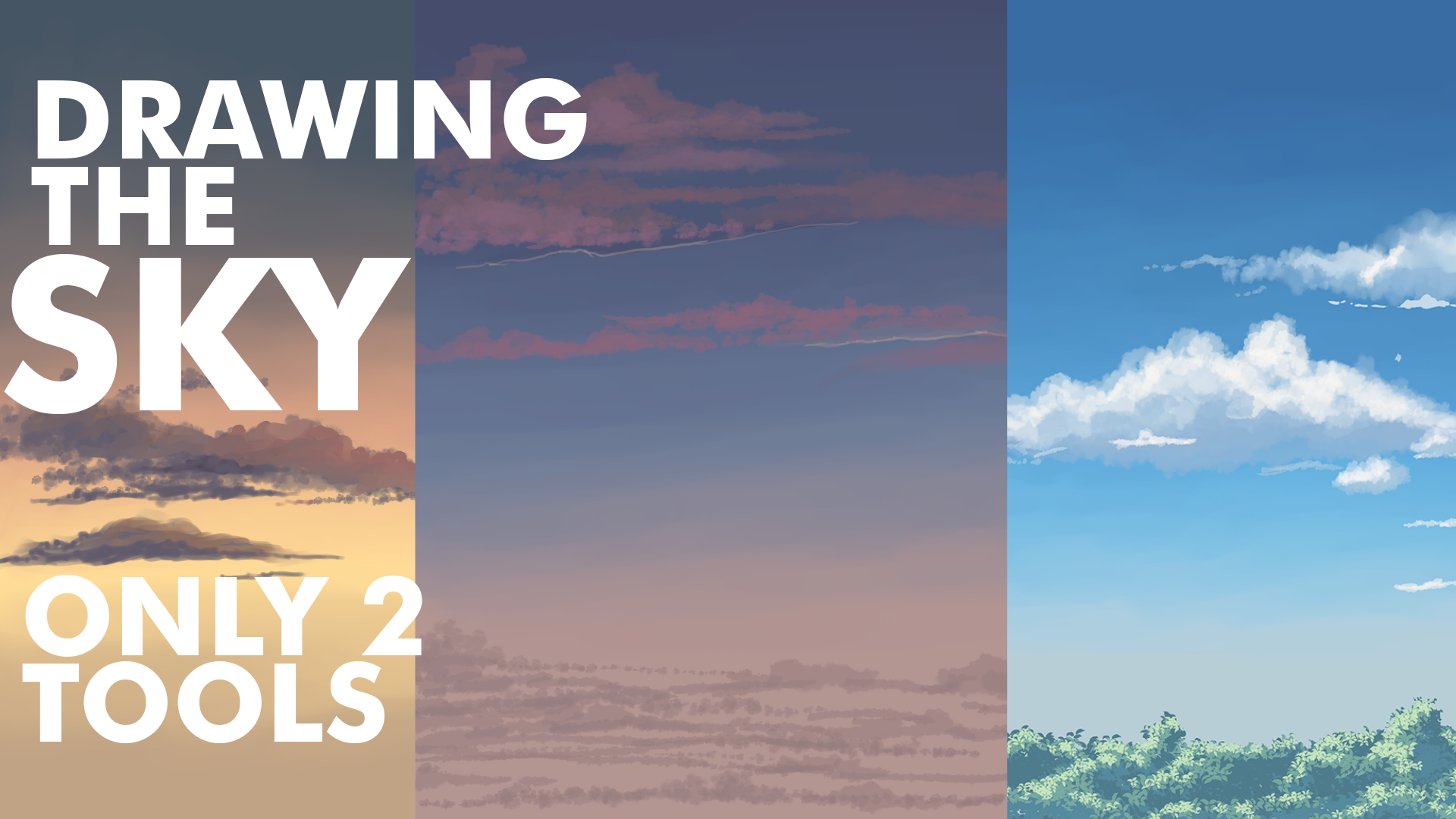 Welcome back to another tutorial, today we're looking at one thing I really like to draw: The sky!
The sky is normally the first thing I paint when I'm drawing backgrounds, because the colors will determine what the whole image looks like!
So this is how we start, with colors. 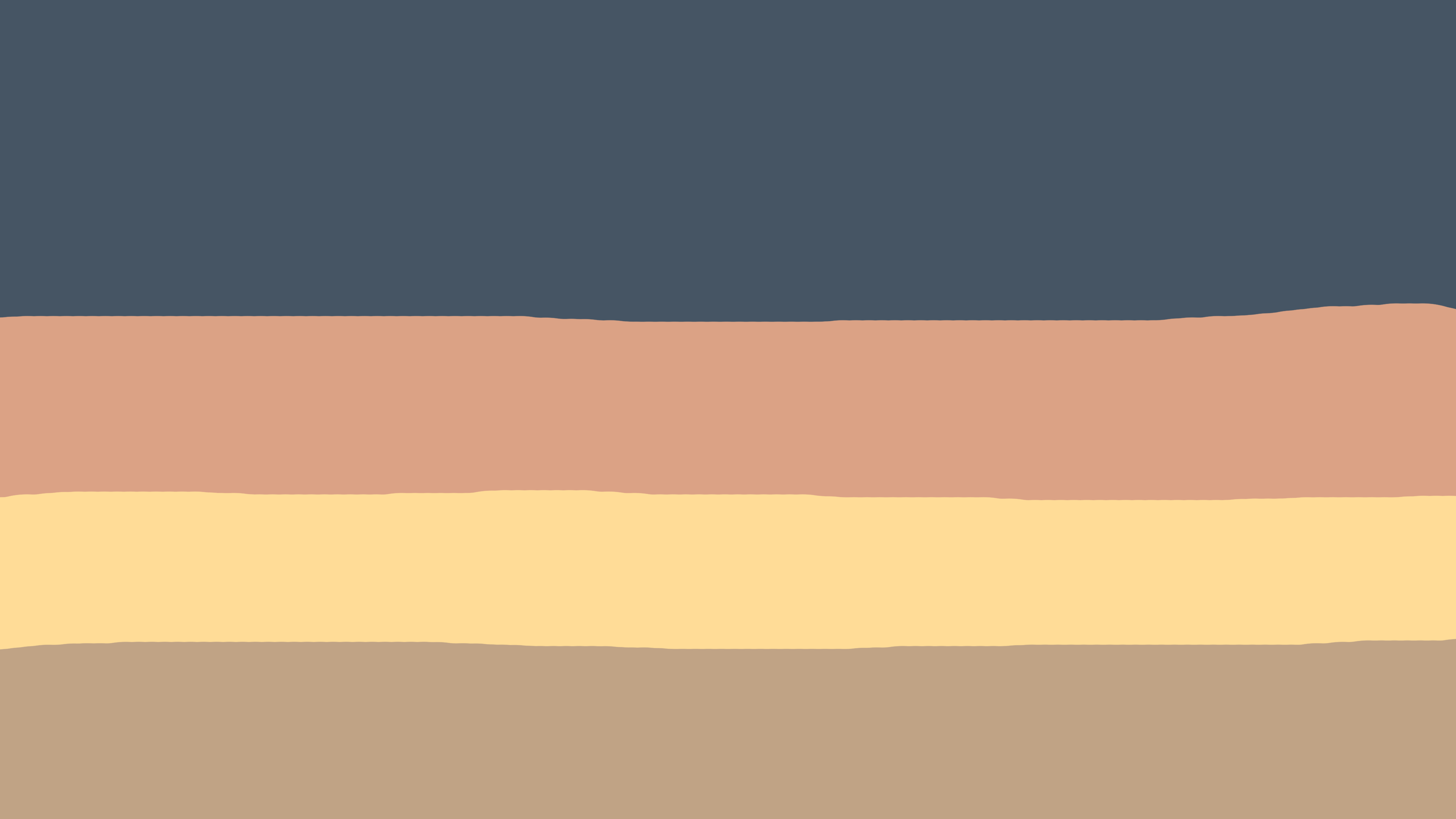 First, with a round brush, just add the colors. Today we're doing sunset and twilight, but the method can be applied to any time of the day. And how do you choose the colors to use? Just look at reference pictures and you'll get the idea. Just don't try to pick the colors from pictures though, if you try to mimic the colors instead of picking them, eventually you won't need references at all.
As a rule of thumb, I put a dark blue on top (more or less blue indicates how late it is. More blue = closer to the night) then orange, then yellow. Finally, I usually put a darker color on the bottom. The reason for this is that since the planet is round, during sunsets, the light has to cross more atmosphere closer to the ground, making the color more dense (that's why the sky turns orange during the sunset, it's just the sun illuminating a bigger quantity of air) and pollution also helps. 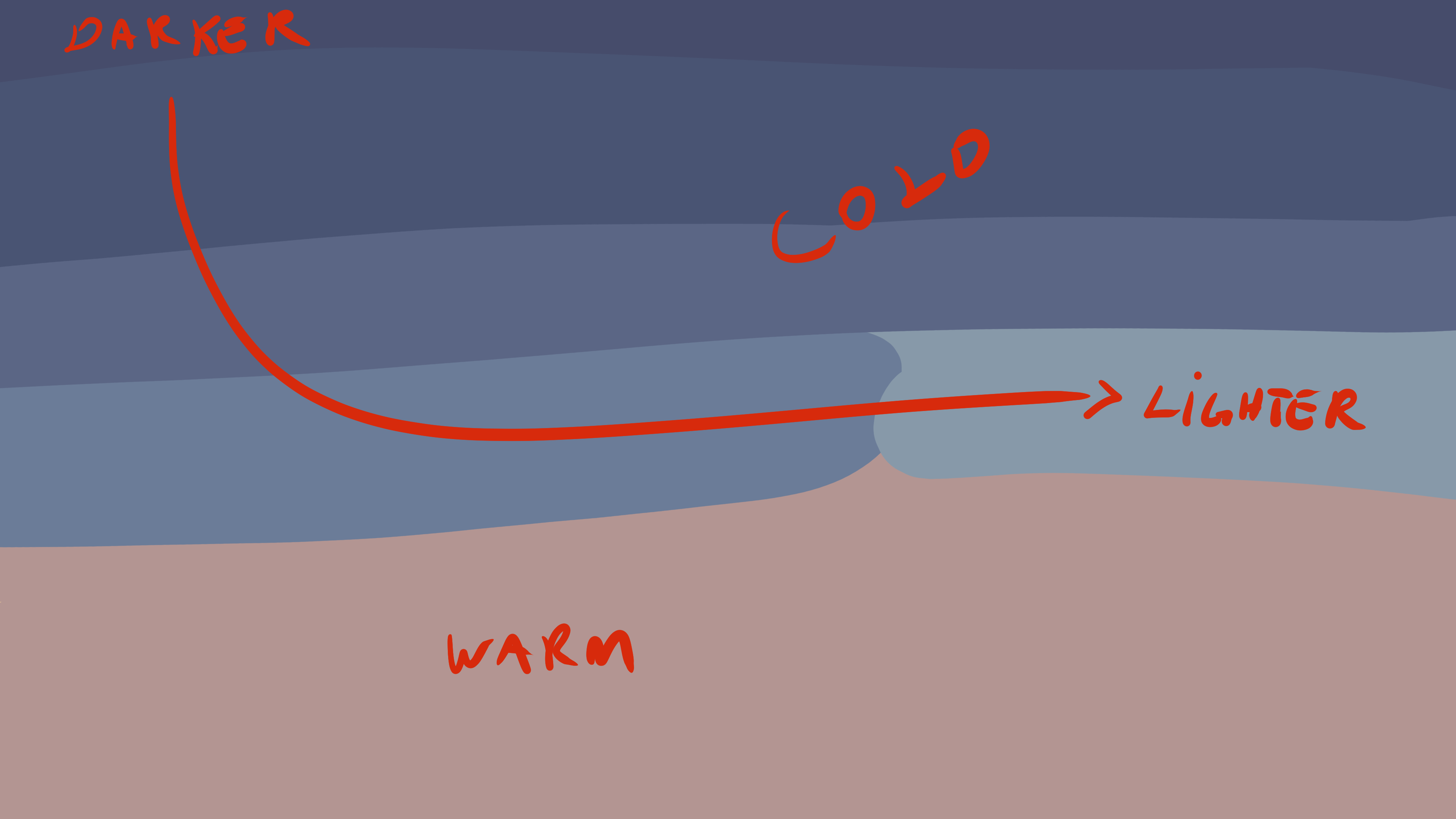 If you want to make a scene that is closer to the night than the day, use more blue. Make it darker on top (also valid for all other times of the day) then use lighter shades of blue below it. If you want to put the sun on your drawing or indicate where it is, use a lighter shade of blue on that side, but try to keep the dark top one as just one piece.
Now, since we're using more blue in this picture, I'll make the orange color darker and less saturated (remember the order, right? blue, orange, yellow)
This combination always makes for a great sunset. Want to make it even closer to the night? Darker blue shades and make the orange more red/pink. Now, for the magic and one of the biggest reasons why I prefer Clip Studio Paint to any other drawing tool.

The blend tool! That's the second and last tool you need for this tutorial. Now that you have the colors in place, just blend them! Pass the blend tool between two colors to mix. I recommend starting with a bigger brush tip, then making it progressively smaller on subsequent passing. Just keep this consistency of always mixing between the colors, including the ones that were already mixed. 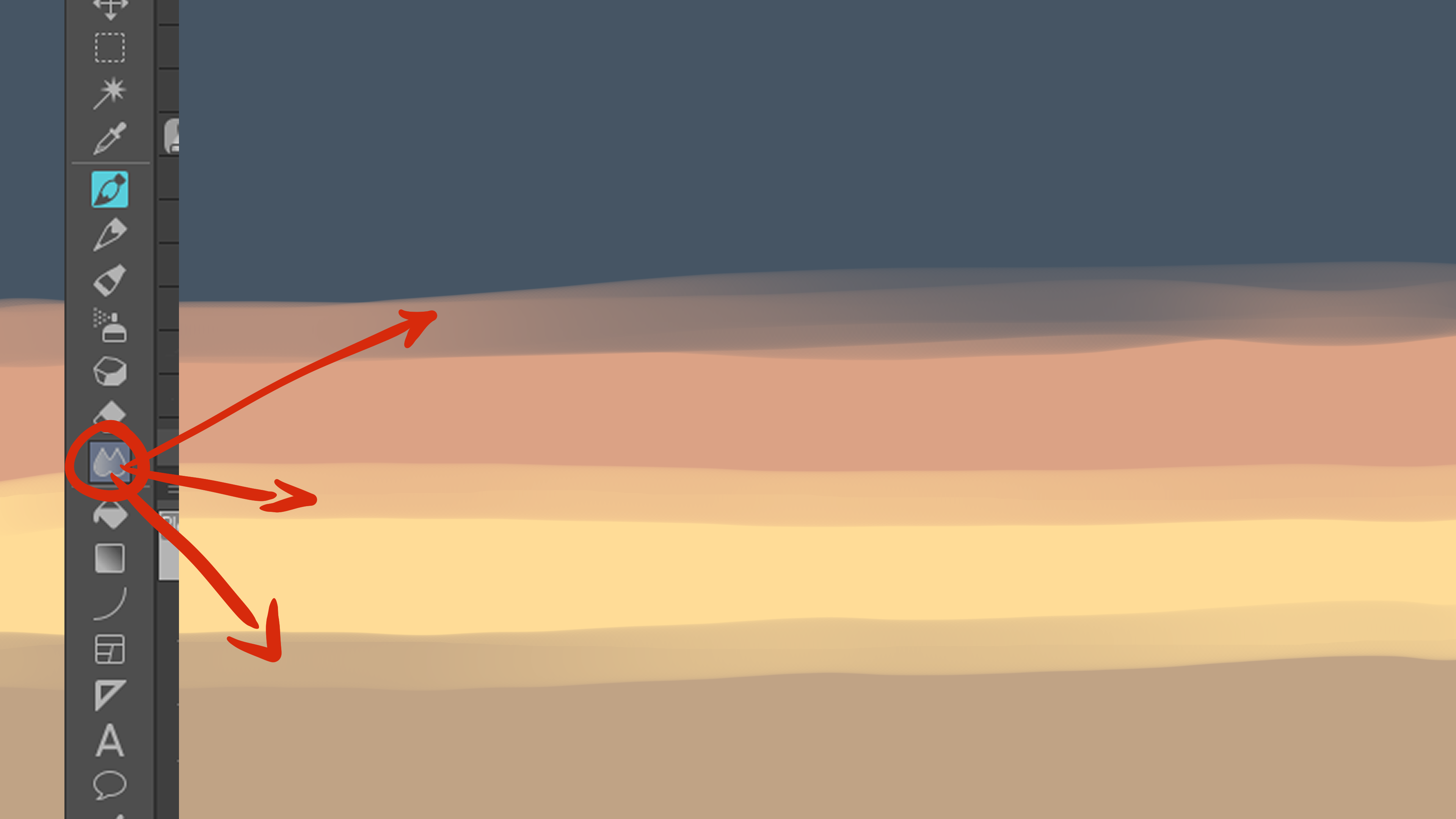 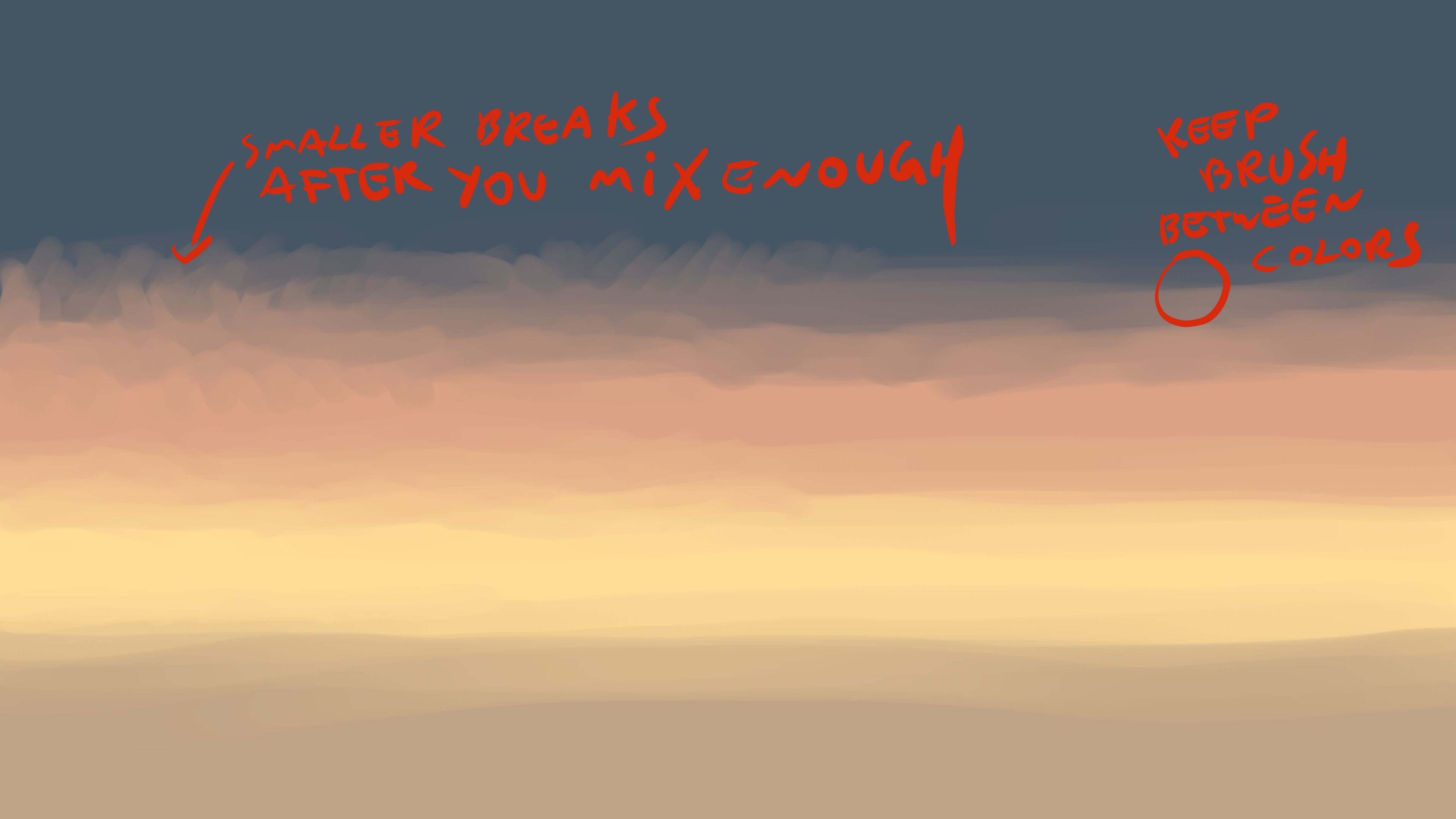 Now, clouds.
Clouds are a very important part of drawing the sky. And they're quite simple to make!
Once again, all you need is a round brush and the blend tool.
First, make a new layer (never draw clouds on the same layer as the sky!)draw the shape of a cloud, it doesn't have to look great. I recommend looking at pictures of real clouds first.
Then just use the blending tool like you did with the sky! But rather than mixing colors, you'll just make the edges softer. 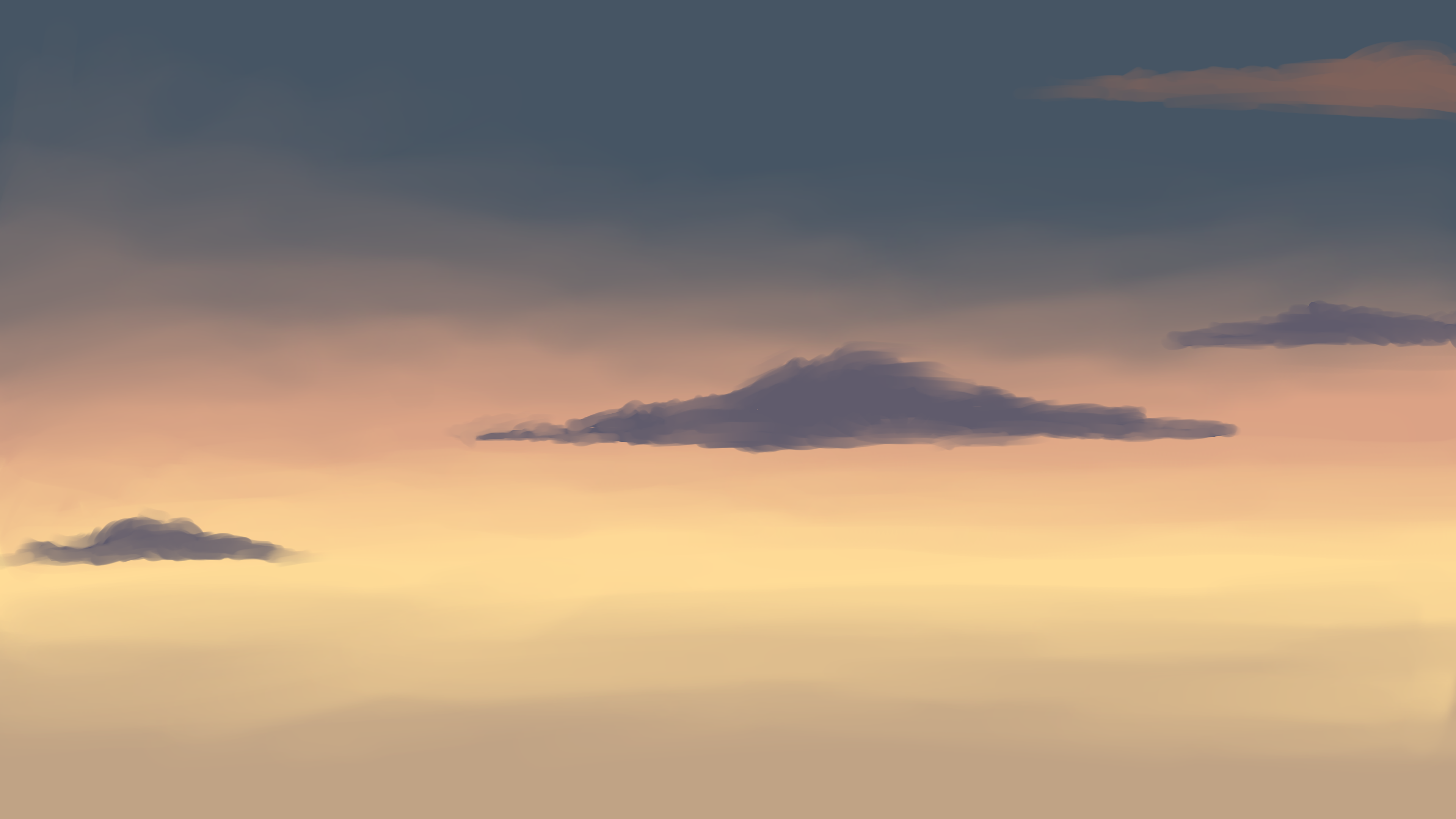 As I said, just draw the shape, I recommend doing it in a darker color. Since we're drawing the sunset, you should go with a desaturated purple. I'll explain why in a minute.
Clouds have volume to them. Think of them more like cookies than anything else.
If you look at a cookie from the side, the bottom is flat. If you are looking from the top or bottom, however, the cookie is... Well, it's still flat, but you can't represent that as a shape anymore. If your drawing is from a lower point of view, you'll have to draw a darker bottom to your cloud.
Regardless, next you should draw the highlights. I usually choose something closer to the color I used for the bottom part of my drawing for this.
(I'll talk about regular white clouds further down)
Just lock the transparency of your layer and draw the highlights. Unlock the transparency when you mix the colors again so you can make lighter parts around your cloud.
Keep adding details and blending until you're satisfied! If you're ever confused, look for references of real clouds, but always remember: Flat bottom like a cookie! 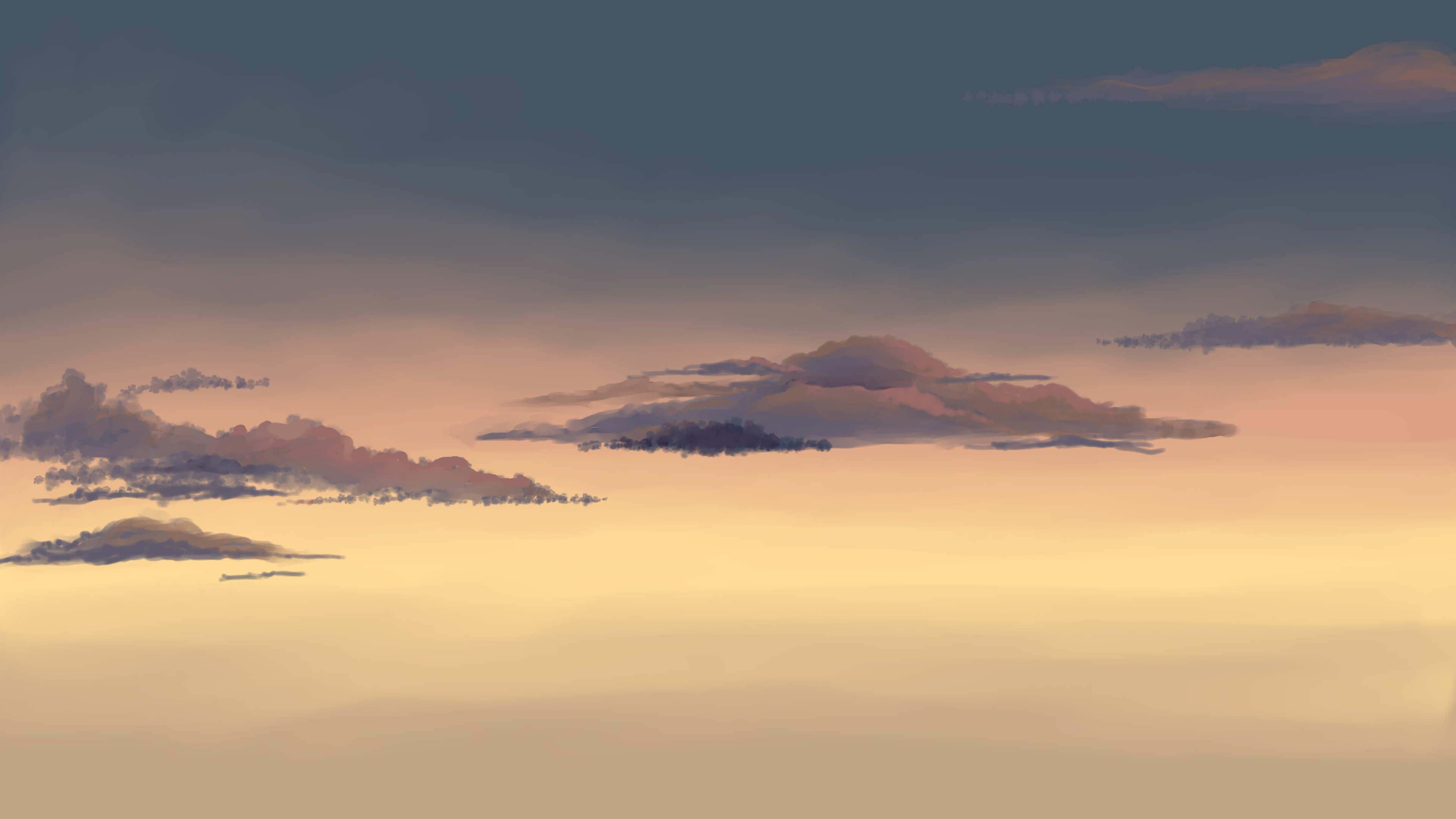 As you can see above, highlights aren't used just on the top for the clouds, but also middle. After all, the cloud has volume, don't forget that.
One last thing, keep in mind the position of a cloud in relation to the sun. If the cloud is around the same level of the sun, it will be darker (hence our choice of dark purple here) if it's above or below it, it will have more highlights and can be just plain orange or pink! Pink clouds are great during the sunset, let's take a look below. 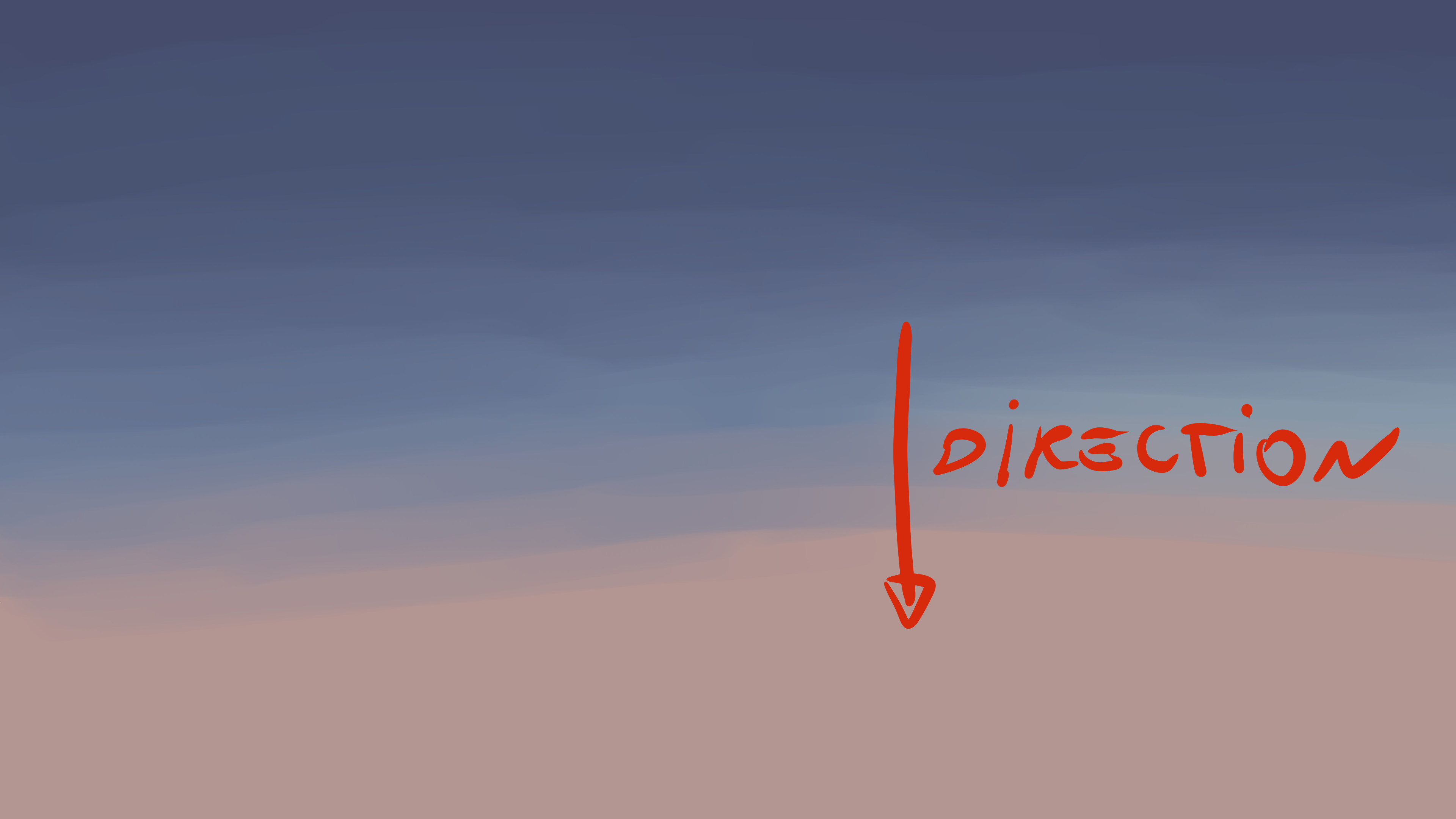 This is the same image as the second example, but already mixed. I usually try to do the mixing in one direction according to the color that I want to emphasize the most. Further uses of the blend tool follow the same direction. Now, the more you blend and the lowest is the hardness on your blend tool, the softer the mix will be, but I like the rough look for the sky, especially because it lets me use the edges between colors as reference for some effects. Yeah, see the edges over there? Let's use those. 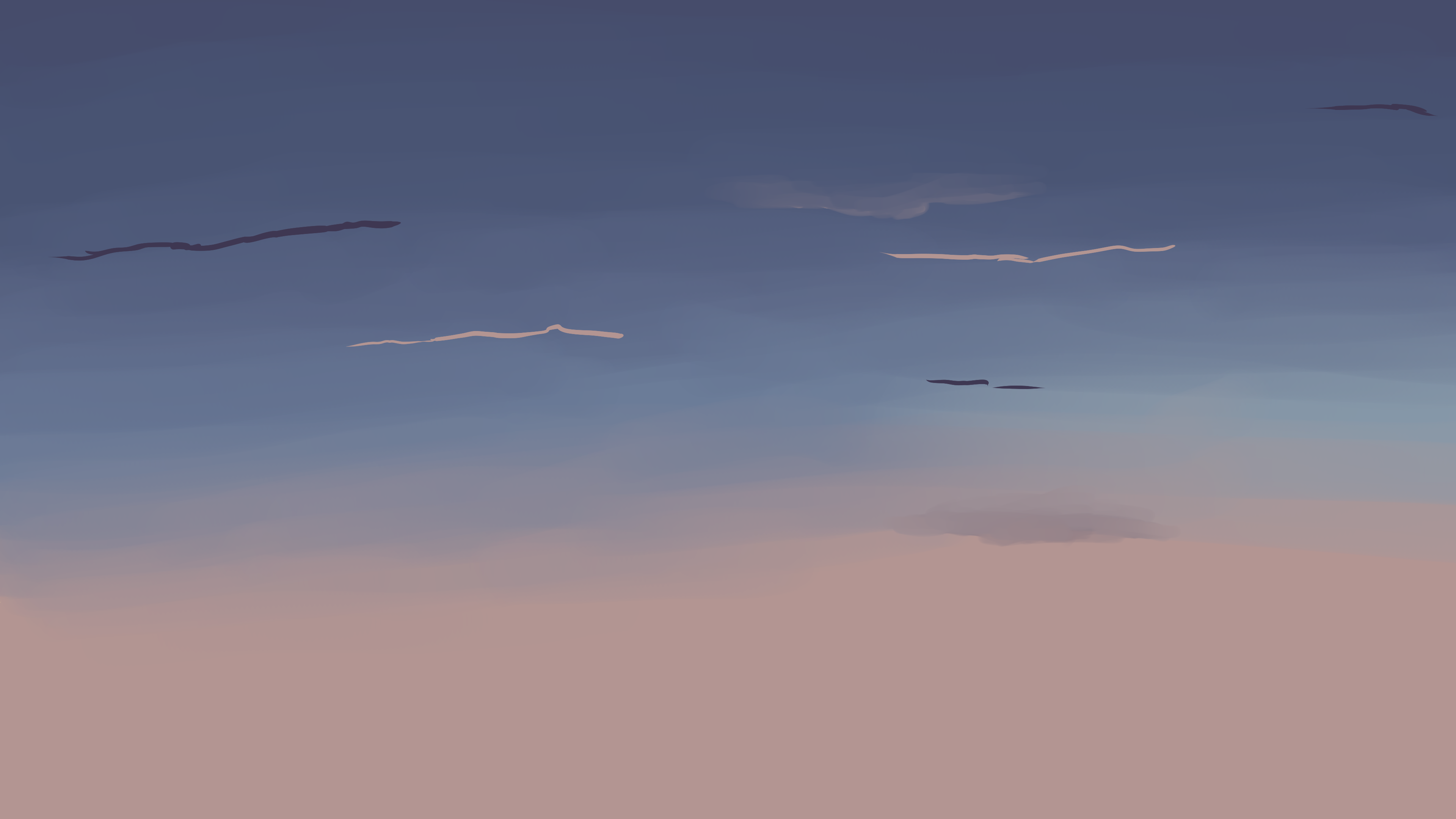 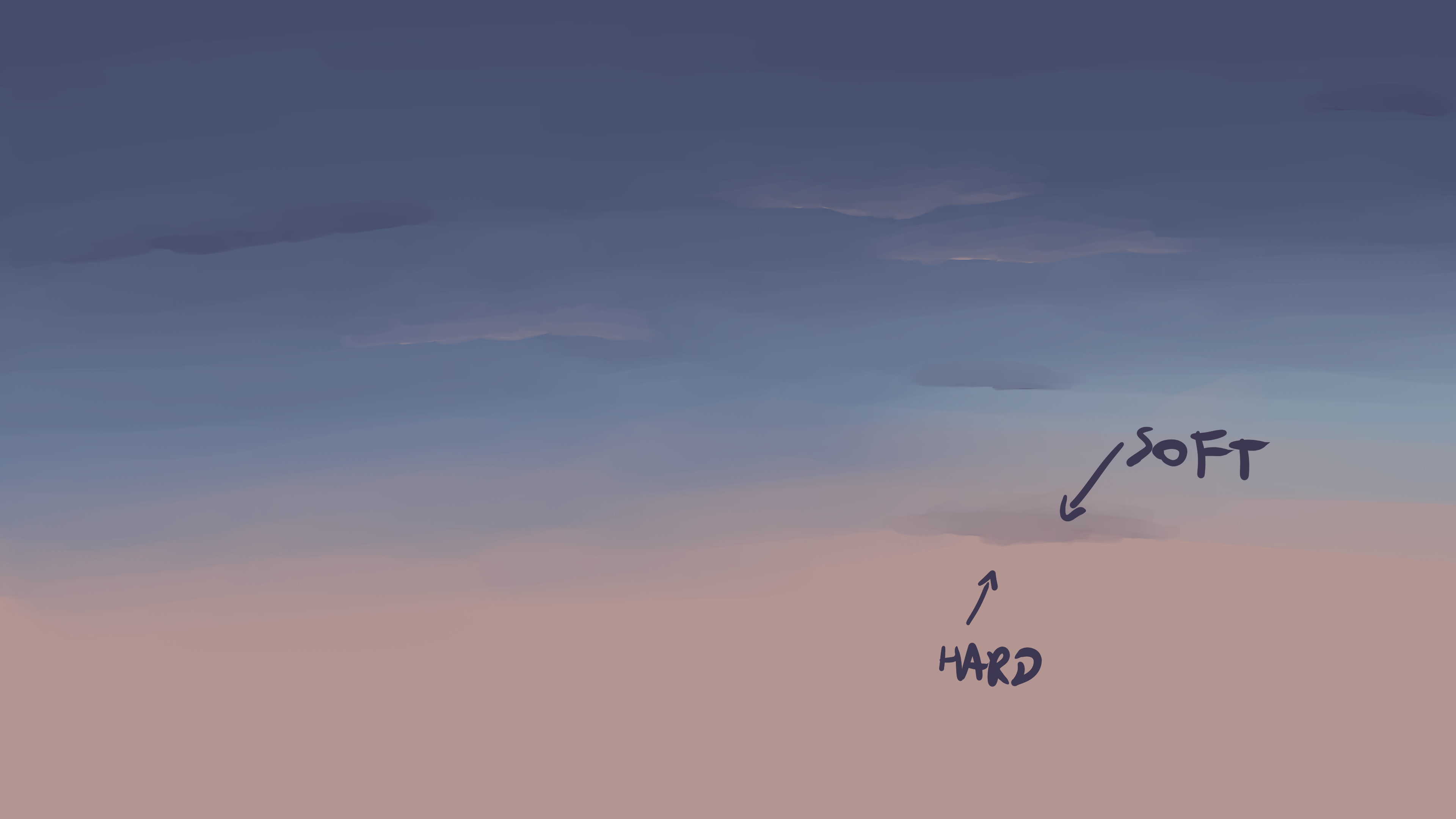 This one is simple. Using either a darker or lighter color (around same hues used for the sky, please.) just draw some lines that try to mimic some of those color edges. Then mix them! I usually keep one side softer and one rough (rough side is the one that is facing the sun)
This represents those smaller clouds that are little more than ripples in the atmosphere. They are food for scenes with more clouds. 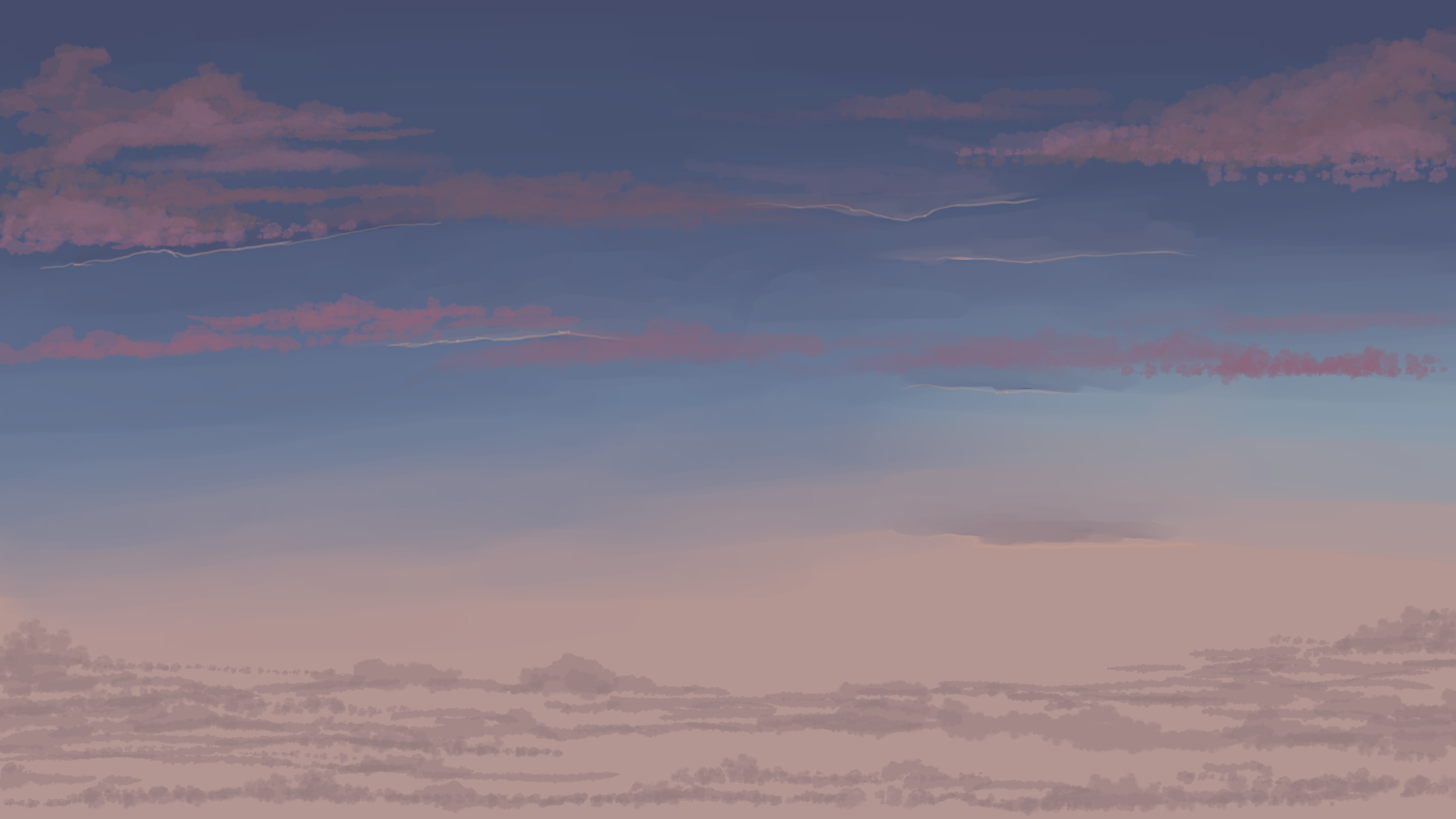 Then, finally, add some clouds! You may have noticed that when you have many small clouds in the sky, they tend to have less volume, so the color variation in them (the highlights we did before) are lesser or even non existent! Once again, I recommend you to look at pictures of real clouds to try to understand them. Look at their density, size, colors. Try to find the patters!)
As I said before, pink clouds are great when it's getting darker, and clouds that are closer to the sun are darker.
In this picture, since it's later in the day, the sun will be closer to the horizon, the clouds above are lighter, while the ones at the bottom are darker. 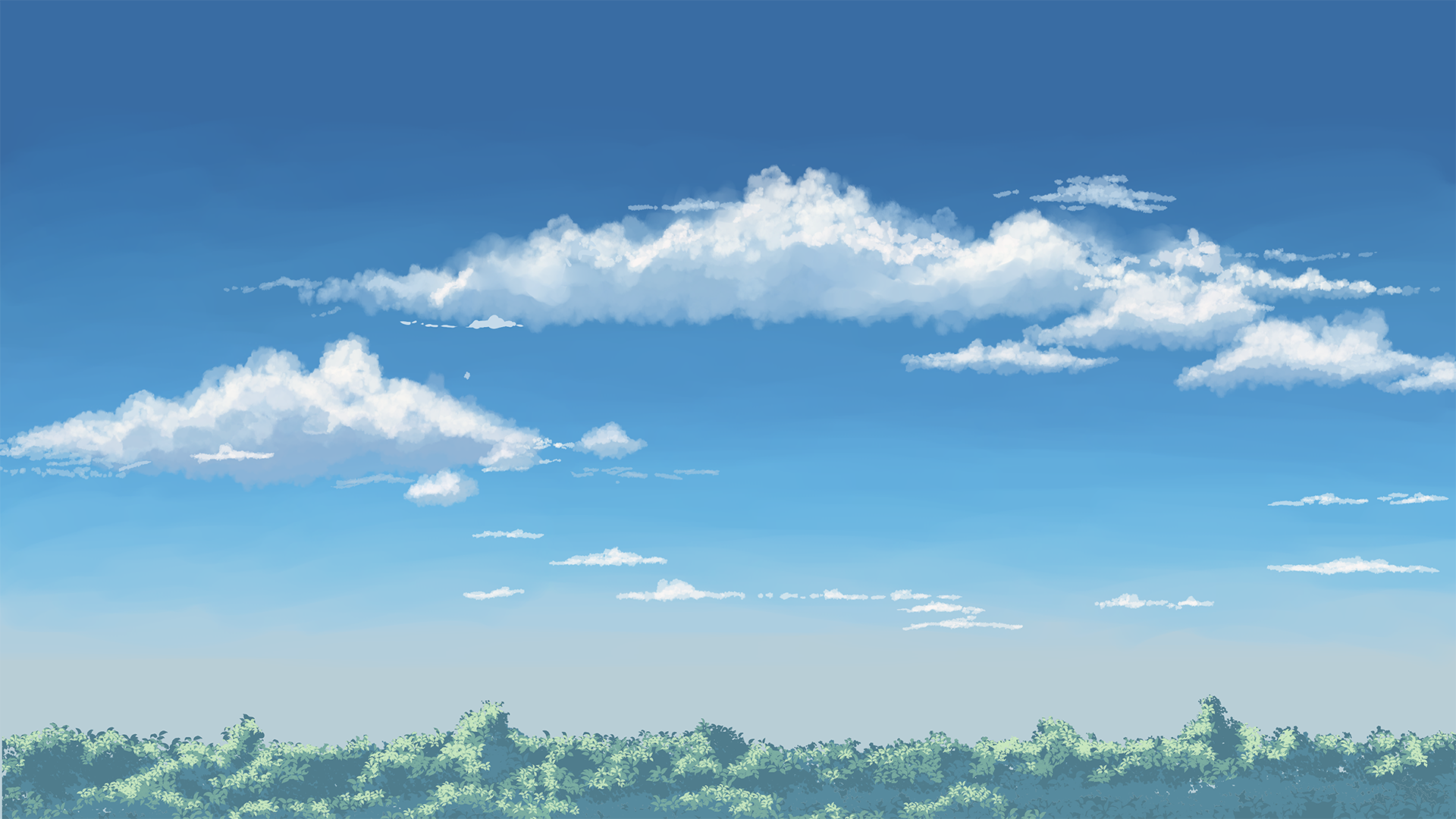 Now, all of these principles apply for any time of the day, so here's a picture of the regular daylight to illustrate.
Notice, darker blue on top, moving to lighter blue and a unsaturated color at the bottom. Notice that we're not using orange this time because the sun didn't start setting yet, so it's all blue. The only other time this will happen is during the middle of the night. So, if the sun is not rising or setting, the sky is all blue, otherwise, blue, orange and yellow.
Another important thing to notice, the color at the bottom should be close to the horizon, it shouldn't occupy a big space at all. You may have noticed on the previous examples how the bottom part occupies almost half of the picture, but this is only to give more space when you put the sky in your scene! Depending of how far you can see the horizon (imagine if this scene was from the top of a hill, for example, the horizon would be further up) you'll see less of the bottom color!
As for the clouds during the day, they'll be light on top and blue at the bottom! Just remember that they have volume, so clouds with a darker bottom (or a bigger bottom at all) are just bigger and may represent incoming rain!
I recommend always adding smaller clouds next to the bigger ones, it's a nice small detail.

To be fair, a round brush and the blend tool are all that I need for 90% of my arts. (it's all that I used for the one below)
Make shapes, mix them, add more colors and mix again as needed. It's a pretty entertaining process and understanding it will allow you to paint anything!
I hope you found this tutorial useful, now go on and start painting some sky! 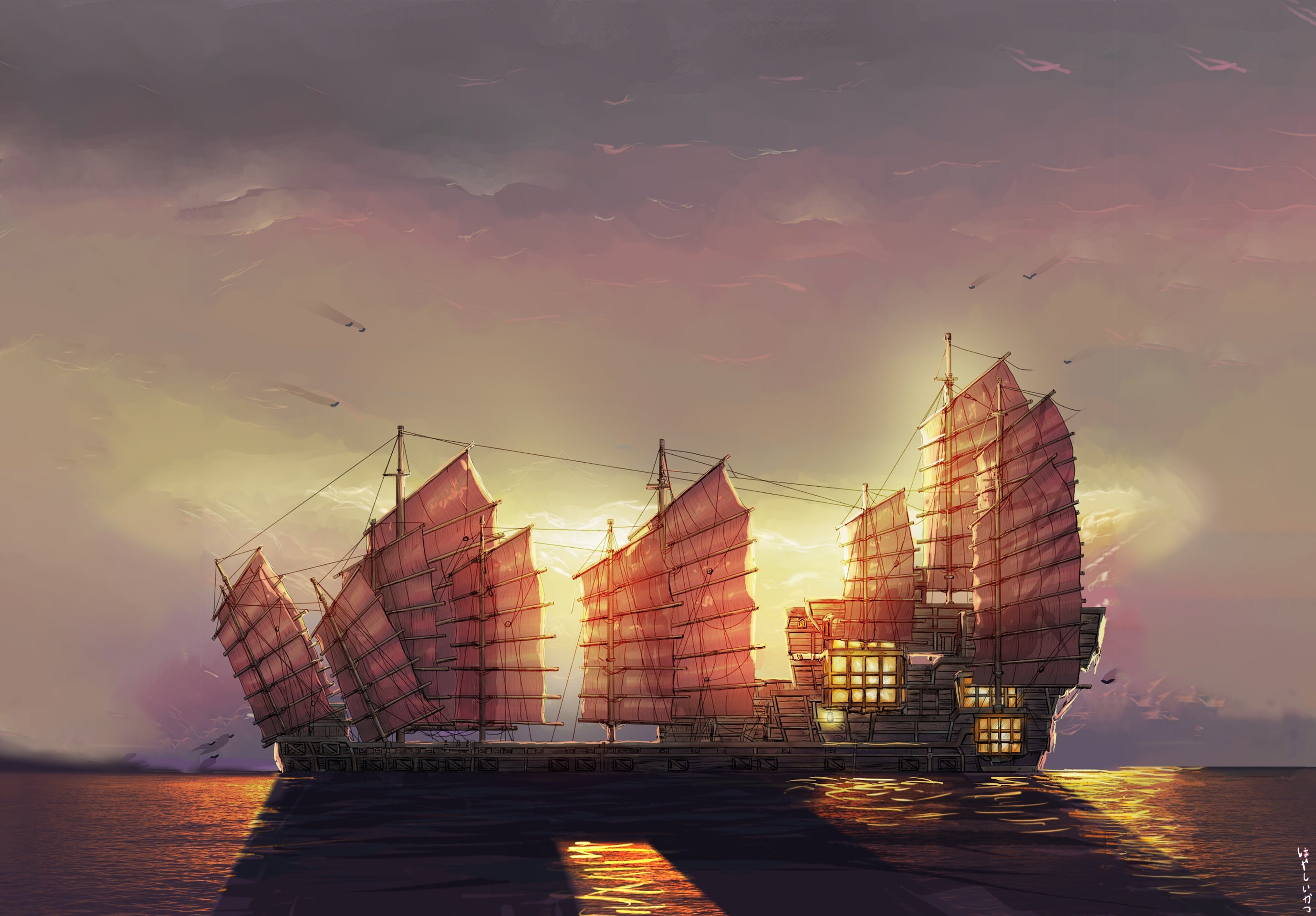