In this part, I’ll color the costume.

I color the stockings using the same method as I used for the skin last time. 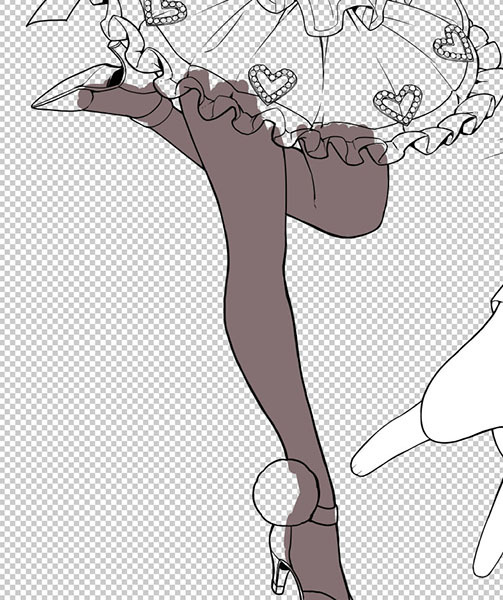 After painting the base color, I’m going to add the diamond pattern.

① I make a new layer and use the [G-pen] to draw the lines of the pattern, paying attention to the three-dimensionality.

I used a color that was easy to distinguish from the color of the stockings. In this case, I used blue.

I draw a larger border than the actual stockings so I can fill in any parts of the pattern that are cut off. 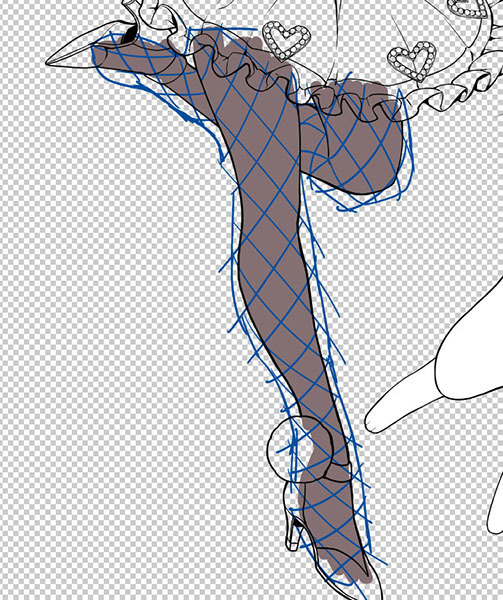 ② So that I don’t leave any gaps, I use the [Auto select] tool to select the parts of the pattern that I want to color.

After making my selection area, I adjust it with the [Expand selected area] function so that there aren’t any unpainted parts 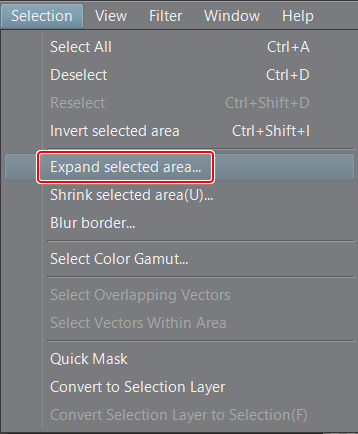 ③ I use the [Edit] > [Fill] tool to color the selected areas.

If any parts are left unfilled, I color them with the [G-pen]. 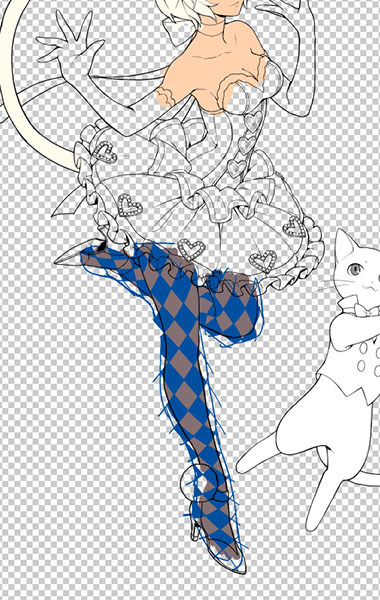 ④ I open the [Edit] menu > [Tonal Correction] > [Hue/Saturation/Luminosity] dialog box to change the color to a deep brown.

Then I set the “pattern” layer to [Clip at Layer Below] so that it clips to the “stockings” layer, and the parts outside of the stocking color isn’t visible. 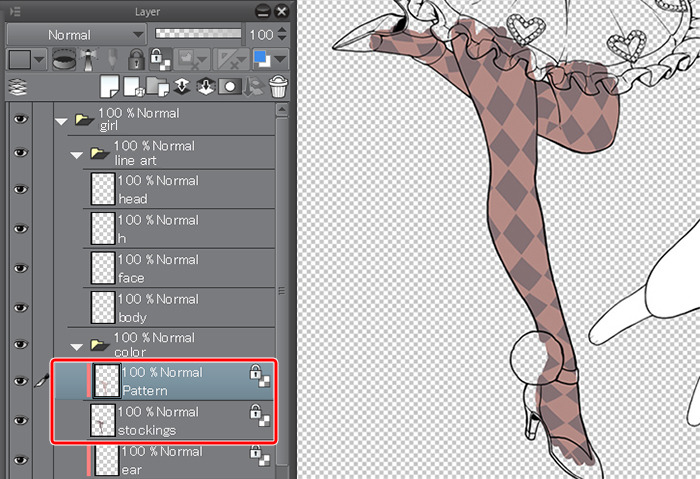 For the costume, I won’t paint the skirt, corset, and other parts separately. Instead, I make layers for the pink, black, and mint green, and color all the parts for each color on a different layer.

Note: I’ll use a blue color to fill the area, then change to pink later.

① I use the [Auto select] tool to make a selection area, then adjust it with the [Expand selected area] function so that it overlaps with the line art. 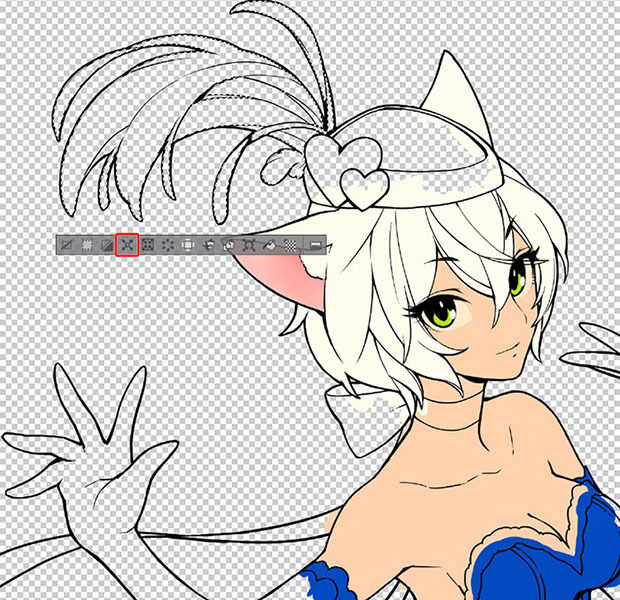 ② Then I fill the selection area. Even if I don’t select the entire area I want to fill, if I select the outermost area, then I can easily paint any remaining areas with the brush afterwards. 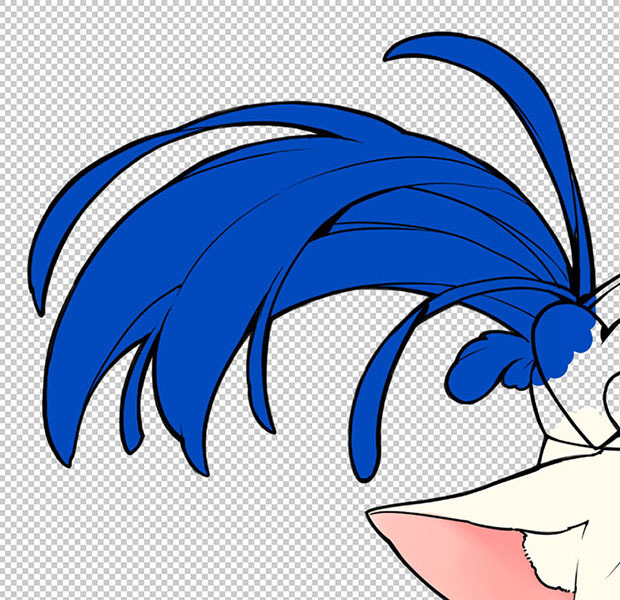 After coloring, I hide the “line art” layer to check that there are no unfilled gaps.

Finally, I adjust the color to pink in the [Edit] menu > [Tonal Correction] > [Hue/Saturation/Luminosity] dialog box. 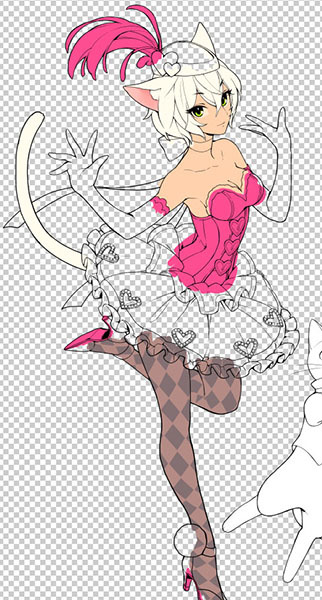 I use the same method to color the mint green areas.

For the contrast color on the feathers, I make a new layer and add a clipping mask over the pink layer. In the later steps, I will paint the shadows of the pink and green part of the feathers at the same time. 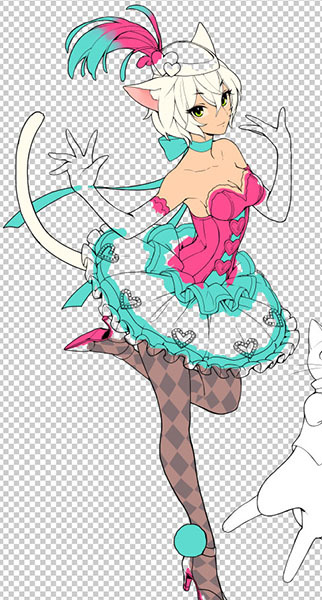 I color the lines on the corset and the stitching by hand. 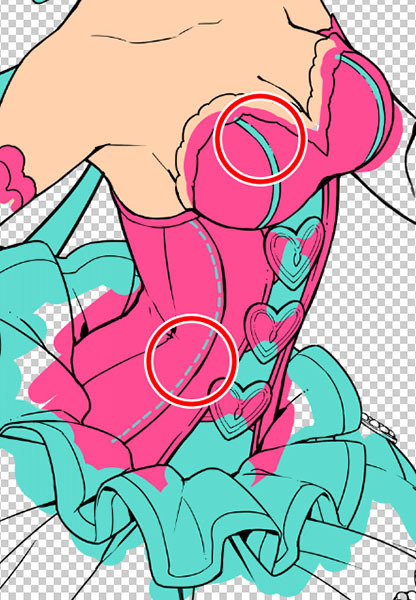 I use the same method to color the black parts, and then I’ve finished coloring the girl. 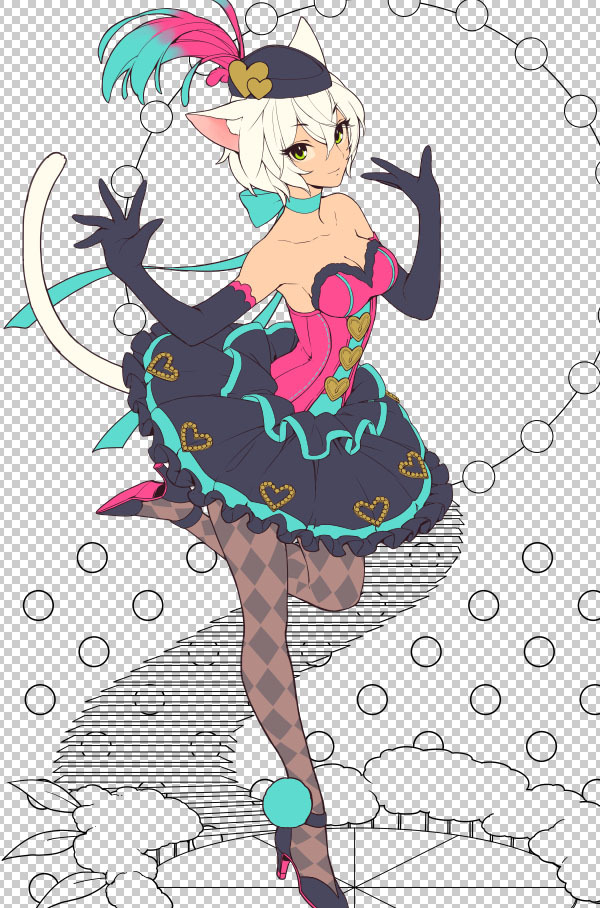