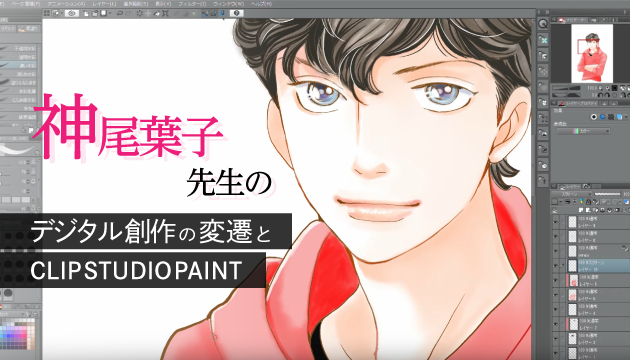 Talk to Professor Yoko Kamio, who is serializing “Hana nochi Hare -Hanao Next Season”, about the reasons why digital (ComicStudio, CLIP STUDIO PAINT) was introduced to manga production, the current production flow, and the tools used. I heard.

Profile: Yoko Kamio
Born in Tokyo. Debuted with "I am waiting for you". “The Boys from Flowers” serialized from 1992 is a huge hit. Won the 41st Shogakkan Manga Award.
Currently, “Shonen Jump +” is serializing “Hana nochi Hare -Hanao Next Season”, the new chapter of “Men from Flowers”.


■ "Shonen Jump +"
A full-fledged manga magazine service that allows you to read new and past hits by popular boys from Shonen Jump for free daily.


* This article is in Japanese. Machine translations are available at sites other than Japanese.


As a result of trying various software digitally, I settled on ComicStudio and CLIP STUDIO PAINT.

―When did you start to incorporate digital into your manga production?

Kamio: About 11 years ago, I started serializing a “Festival Special” series on “Jump SQ.” At that time, there was an assistant who was very familiar with Mac and Photoshop, and other assistants including me introduced lectures and introduced digital.
Over time, I think that it was the end of the series, but when I heard that there seems to be a software called ComicStudio that specializes in manga production, the manga artists around were just starting to move on one after another. I also moved to ComicStudio.

Digital used Photoshop, Painter, SAI and so on. I like new things and I want to try it out when others use it. However, as a result of trying various software, I settled on ComicStudio and CLIP STUDIO PAINT specializing in manga.


-Is the production of full-digital? Or is it combined with analog?

Kamio Monochrome manuscripts use both analog and digital. I and two assistants draw line drawings in analog, scan the manuscript, and finish the tone with ComicStudio. There is an assistant at home who is fully digital.

In the case of color manuscripts such as covers and illustrations, everything from line to painting is done on CLIP STUDIO PAINT, not analog but fully digital.

The primary reason I decided to switch to CLIP STUDIO PAINT was “materials”.

―Are there any reasons you decided to move from ComicStudio to CLIP STUDIO PAINT other than the ease of drawing lines?

Kamio: The main reason I decided to change might be the material. There is a material distribution site (search for materials / ASSETS), and you can download anything that is easy to use.
I've been using it since ComicStudio, but there are many new materials from CLIP STUDIO PAINT, so I think I should finally move.


―Please tell us your favorite tools such as pens and brushes that you always use at CLIP STUDIO PAINT.

Kamio: I really like the “Yawa skin brush”. The color may be drawn with this brush, changing the brush size.


It would be great to be able to do it in an instant if the material is the hard work of how many hours would it take to make a tone.


―In CLIP STUDIO PAINT, is there a function that you want to use from where you haven't used yet?

Kamio I am interested in 3D functions and perspective rulers. The current work is a school thing and it is not very useful because it contains fantasy elements, but when drawing a work like a real human drama that requires a solid background, `` Place a ruler on the photo I want to draw a background with "How to draw a background".

The place with more freedom than analog is where I think it was good to introduce digital.

-Have you ever changed the style of production from analog through the merits of producing manga digitally and the introduction of digital?

Kamio: I think there are many advantages of digital. First of all, the finishing time has become very short. Of course, it took more time than analog to get used to after getting digital, but now it is much shorter.

After that, you can redraw as many times as you want. In analog, if you don't like the face you drew, erase it with white (correction liquid)… Draw it, then erase it… The manuscript repeatedly swelled up, but digital does not.
Line drawings are still analog, but when you want to redraw, you often scan and redraw them digitally.

If it is digital, it will enlarge on the screen and you can draw as much as possible, so it is difficult to adjust it so that it does not draw too much, but conversely, even if it is small, the part you want to draw is drawn digitally.

The place with more freedom than analog is where I think it was good to introduce digital.

You can use screen tones, especially gradation tones, as well as materials from the material distribution site (ASSETS). If you take a close look at my work, you will find “That and this!” (Laughs).

▼ Official usage course "How to use tone / Basic tone"


▼ Official usage course “How to use tone / Gradation (monochrome manuscript)”

―On the other hand, are there any disadvantages?

Kamio: That's not a demerit, but in the case of digital, it is unsatisfactory that there is no “complete manuscript”. I was just self-satisfied, but before, I put a pen, put an eraser, and put a tone on it. Even in digital, the finished manuscript is printed and output every time, but the actual feeling is different.

But what are the disadvantages? That ’s all I can think of, and I think it ’s really just merit.

-Thank you very much!


For the story behind the creation of “Hana nochi Hare -Hanao Next Season-” and the background from the debut of the teacher to the present, see this article posted on Manga Navi, a Manga (Manga) Bring / Post / Manga Awards portal site check!