When drawing illustrations or manga, the numbers of layers grows so much that you can’t remember what you drew on which layer... It happens to all of us.

Here, we will introduce some tricks to organize your layers so you can use them easily.


■How to select multiple layers

I you click on a layer, it becomes “selected”. To apply any effects, first, you have to “select” a layer.

To add effects to multiple layers simultaneously, you can save time and effort by selecting multiple items at the same time.

You can select multiple layers by checking each layer or by holding down the [Ctrl] key while selecting. 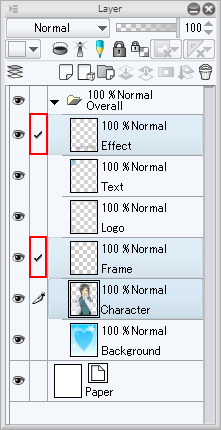 If you want to select a large number of layers at once, you can select every layer between two layers by selecting a layer and selecting another while holding down the [Shift] key . 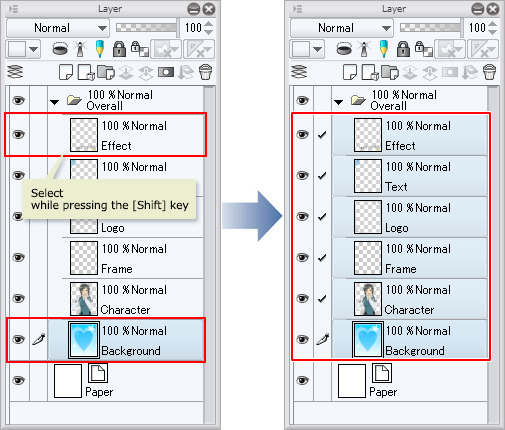 POINT [Reference] If you select multiple layers at once...

- You can combine the selected layers into a folder by dragging them on the [New Layer Folder] icon.

- You can copy the selected layers by dragging them on the [New Layer] icon.

- You can delete all the selected layers by selecting [Delete].

- You can even move and transform them simultaneously with the [Move layer] tool and [Edit] → [Transform].

This is useful when there are too many layers to be displayed or when the layers you want are far apart from each other. 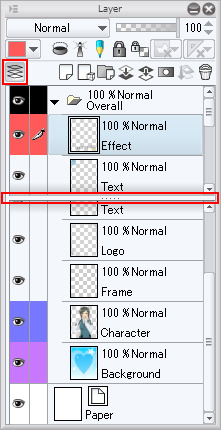 Layers can be assigned palette colors. When there are too many layers, classifying them with colors can make them easier to recognize.

By setting a palette color for each character or part, or for each process such as draft, line art, white, color filling, tone etc., you can draw while clearly organizing what needs to be edited or worked on. 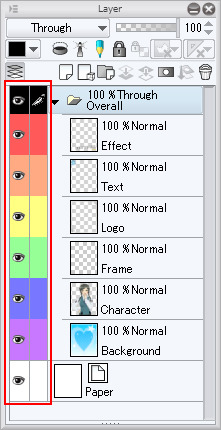 You can change colors by clicking the tab on the left of the [Layer] palette.

By default, there are 6 colors available. When selecting [Use other color] at the bottom, a dialog box will be displayed, allowing you to set any color. 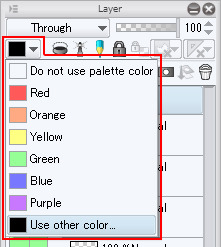 ■How to combine layers

In CLIP STUDIO PAINT, there are several ways to combine layers.


<Merge with layer below>

Merge the selected layer with the layer below it. 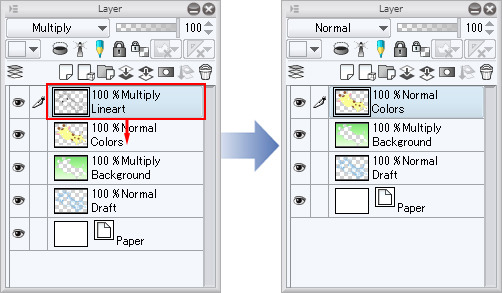 Combine multiple selected layers. In order to combine them, the layers must be side by side. 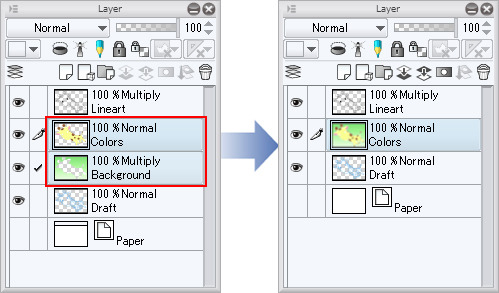 - When a folder is merged, the contents of the folder are combined and converted into a single layer. You cannot merge empty folders.

- You can also merge locked and draft layers. However, the lock and draft attributes will be canceled.

- You can combine tonal correction layers. After merging, the layer will become a raster layer.

- The new layer’s name will be the name of the first layer that was selected.

- After merging, the blending mode will become “Normal”.

- The state of the Palette color, [Lock Transparent Pixel], [Clip Layer with layer below], [Reference layer] will change to [None].

Combine displayed layers. A layer currently being displayed must be selected. 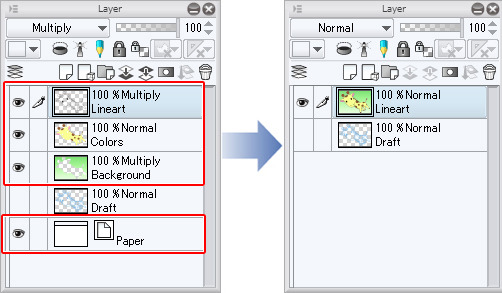 - You can combine every layer expect for the draft layer. Regardless the type of the layer, after combining, the layer will become a raster layer.

- The new layer’s name will be the name of the first layer that was selected.

- The state of the Palette color, [Lock Layer], [Lock Transparent Pixel], [Clip Layer with layer below], [Reference layer] settings will be changed to [None].

We will combine copies of displayed layers. A layer currently being displayed must be selected.

When the copies are combined, the original layers will remain intact. 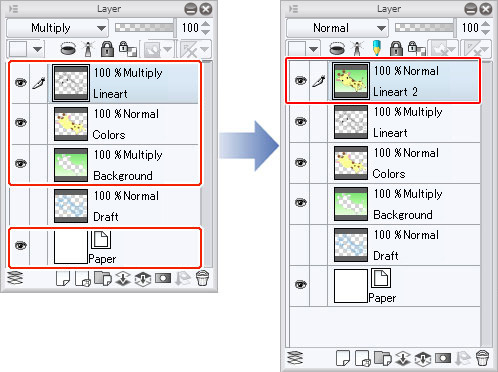 - You can combine every layer expect for the draft layer. Regardless the type of the layer, after combining, the layer will become a raster layer.

- The name of the layer will be “Selected Layer Name 2".

- The state of the Palette color, [Lock Layer], [Lock Transparent Pixel], [Clip Layer with layer below], [Reference layer] settings will be changed to [None].

Merge all layers into one. 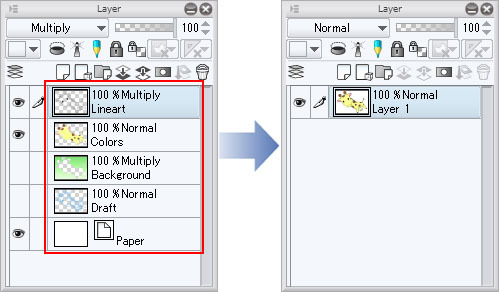 - You can combine all layer types. After combining, the layer will become a raster layer.

- The state of the Palette color, [Lock Layer], [Lock Transparent Pixel], [Clip Layer with layer below], [Reference layer] and the draft attributes will change to [None].

Depending on the type of layers that are combined and the attached information, there are differences in the resulting data.

[Merge with layer below] and [Merge selected layers] will combine and be converted to a raster layer by default, but there are a few exceptions.

- Only text layers... Layers will be combined into a text layer.

If there is a Layer Mask, it will applied and combined with the layer.

As an exception, if there is a Layer Mask an the bottom layer when [Combine with Lower Layer] is selected, a confirmation message saying [Do you want to apply the mask before merging?] will be displayed.

- If you select [Apply], the layers will join after the mask is applied to the bottom layer.

All rulers in the layers that will be joined will be attached to the new layer.

You can change the layer’s thumbnail size by going into the [Layer] palette menu → [Thumbnail size].

By default, the size is set to [Small]. If you change the size, the thumbnails will change as shown below. 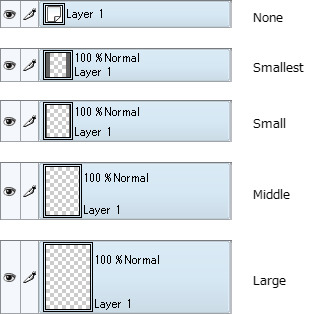 ■Only display the area of the layer on the thumbnail

You can change the area displayed in the thumbnail of the layer in the [Layer] palette menu → [Thumbnail Area] palette.

By default, the setting is set to [Show whole canvas], and shows the entire canvas.

When set to [Show only layer area], the thumbnails will only display drawn parts of the layer.

Next, we will introduce layer attributes, which can add useful functions to layers.


■Clip to Layer Below

When [Clip to Layer Below] is set to ON, the content drawn on the layer (clipped layer) will only be displayed in the areas that are drawn on in ​​the layer below.

The clipped layer will also be affected by the opacity of the layer below it.

If clipping layers overlap, they only appear in the drawing area of ​​the layer below.

You cannot use the function [Clip to Layer Below] on a paper layer. 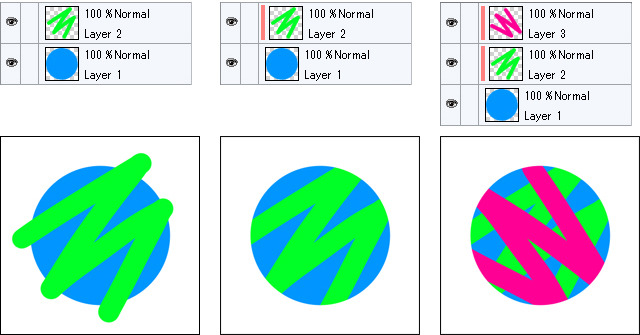 With Monotone Layers, [Lock Transparent pixel] is not available. 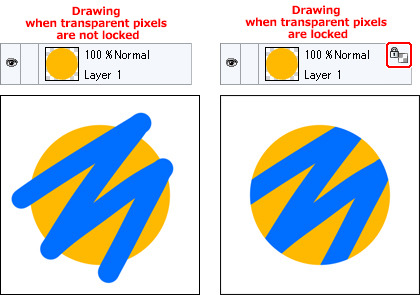 When you are editing another layer, set the layer you especially want to reference as a [Reference layer].

In the [Layer] palette, when [Set as Reference Layer] is set to ON, a mark is added next to the display and the layer becomes a reference layer.

You cannot set a paper layer as a Reference layer.

If you select multiple layers and set them to [Set as Reference Layer], all selected layers will be set as reference layers.

<Example on how to use the Reference layer>

If you fill with the [Fill] tool with [Refer other layers] ON, it stops painting at lines other than those of the character.

This is because the [Multiple referring] → [Refer all layers] box is set to ON in the [Layer Property] palette, resulting in all displayed lines being referenced. 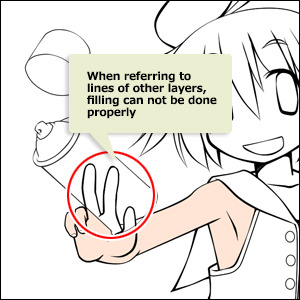 We were able to set the line art of the character as the reference layer, and paint it without problems. 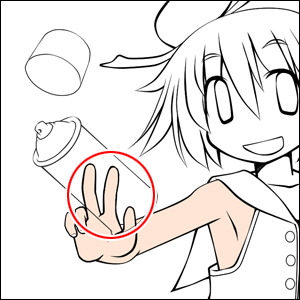 The “Draft layer” becomes a hidden layer when saved as a BMP JPEG PNG TIFF and Targa.

As it will not be displayed in the final product, as its name suggests, it is best used when drafting a drawing.

The draft layer can only be set with a raster layer or vector layer. 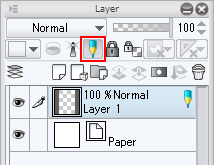 The draft layer can be set to be included in the export/print settings that appear when [File] → [Export (Single Layer)] is selected, and the [File] → [Print Settings] menu. 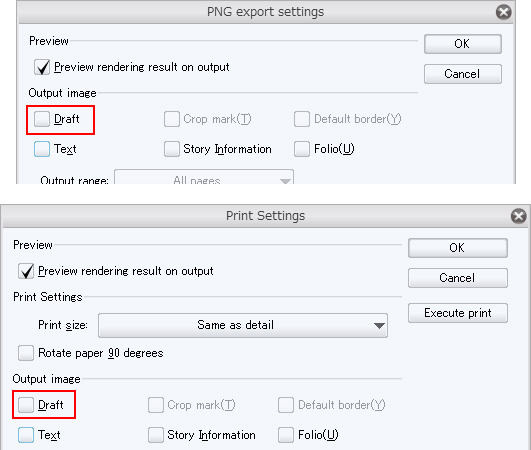 Additionally, when creating a selection or a fill, the draft layer is set as a [Non-reference layer] in the [Sub Tool Detail] → [Reference] parameter.

You can refer to it by setting it to OFF. 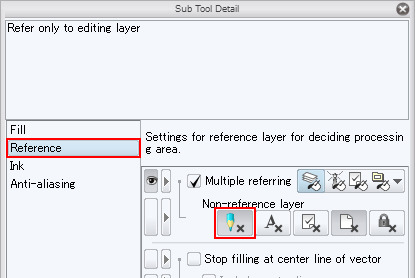 We will introduce you various little techniques regarding layers.

You will be able to achieve tedious work much faster.


■Create a Selection from a new layer

From the [Layer] menu → [Selection from Layer] → [Create Selection], you can create a selection based on the drawn part of the layer.

You can also create a selection from a layer by holding down the [Ctrl] key (Command under macOS) and clicking on the thumbnail in the Layer palette. 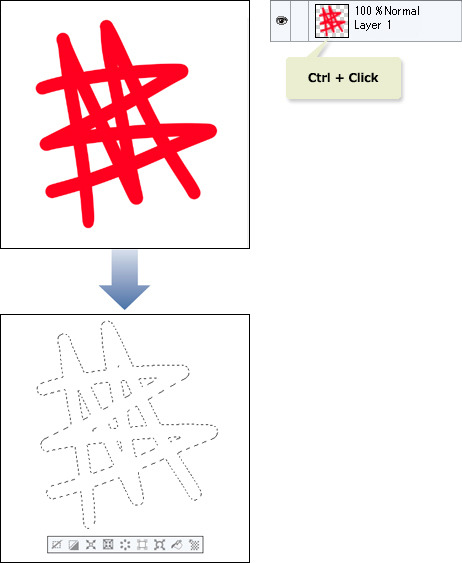 ■How to display only one layer

By holding down the [Alt] key ([Option] For macOS) and clicking the eye of the layer, only this layer will be displayed.

If you want to return it to its original state, click again on the eye with the [Alt] key ([Option] For macOS). 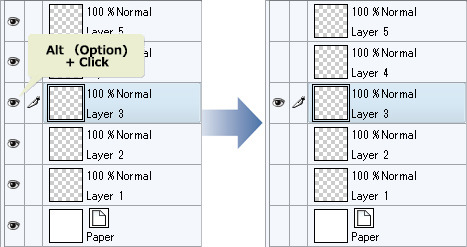 By selecting and dragging, you can move layers. However, as the number of layers increases, it will take longer to move the layers.

By selecting the [Layer] → [Layer Order] → [Top] menu, you can move the selected layer to the top of the layers, or to the bottom with [Bottom]. 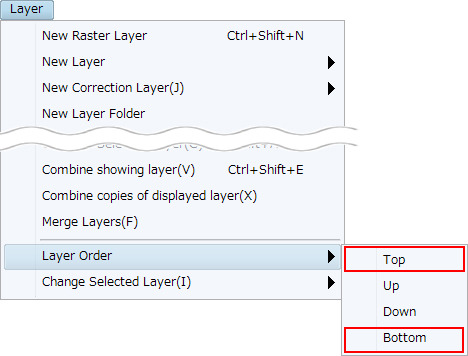 ■Determine which layer you are drawing on with [Ctrl] + [Shift]

By clicking on a drawn part with the [Operation] → [Object] or [Select layer] tool, the layer of the drawing is automatically selected.

When you specify an area by dragging [Select layer], all layers, including the part of the area, will be automatically selected.

You can do the same action by clicking on the canvas while pressing [Ctrl] ([Command] on macOS) + [Shift] key. 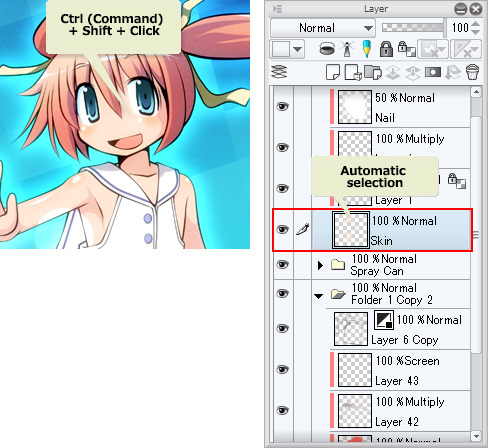 ■Change the color of the paper layer

Double-click the thumbnail of the [Paper] layer to display the [Color Settings] dialog box.

You can change the colors of the paper into any color of your choice. 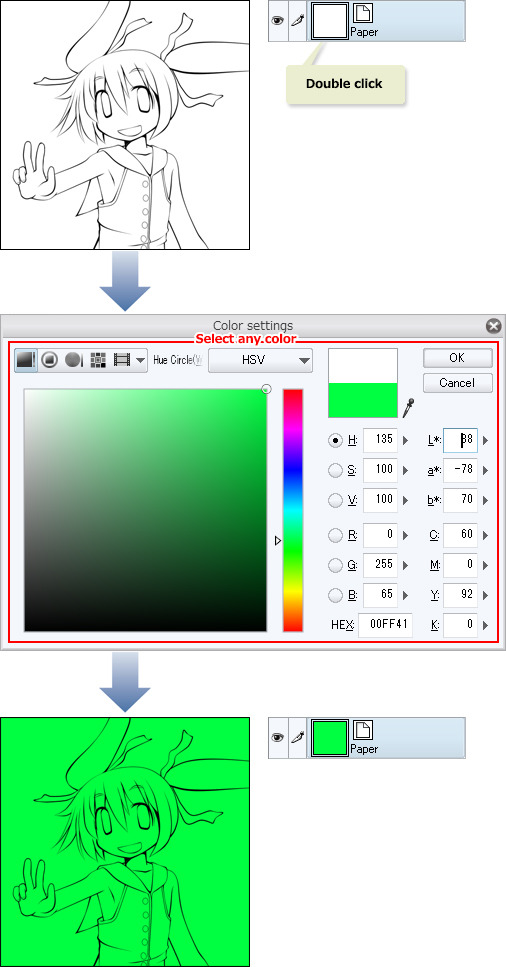 Layer types and how to use them #7 by ClipStudioOfficial