I do the painting with the flat colors as the base layers.

I usually choose the [Watercolor] > [Dense watercolor] brush for painting.

For detailed parts, I use the [Pen] > [Mapping pen], then add gradation with the [Watercolor] > [Transparent watercolor] brush.

The [Transparent watercolor] sub tool paints in a light color blended with the colors painted underneath.

The [Dense watercolor] sub tool paints in a bold color on top of the colors painted underneath.

Note: The below pictures show the same blue color painted with the [Dense watercolor] and [Transparent watercolor] brushes. 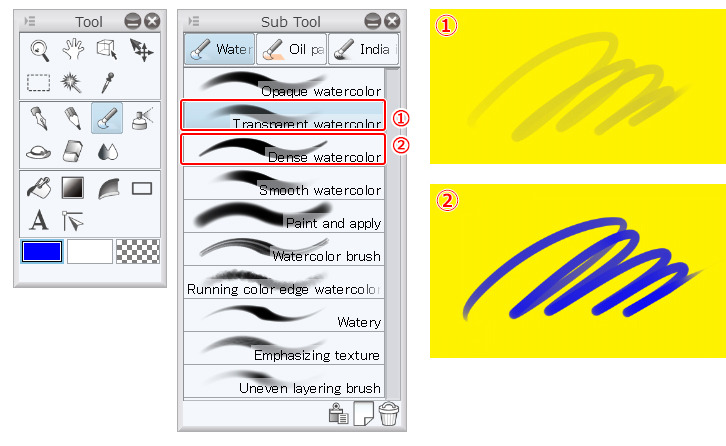 ■1. In the “Character” layer folder, I make a new folder titled “Eyes” and move the flat colors for the eyes to here.

I select the flat color layer and go to the [Edit] menu > [Tonal Correction] > [Hue/Saturation/Luminosity] and adjust the brightness of the base layer. 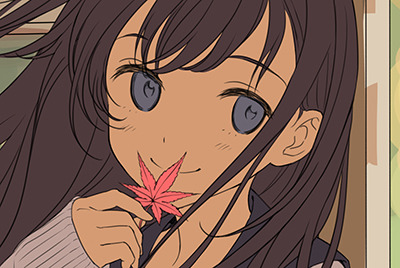 To change the brightness of the color, I mostly adjust the [Brightness] slider. 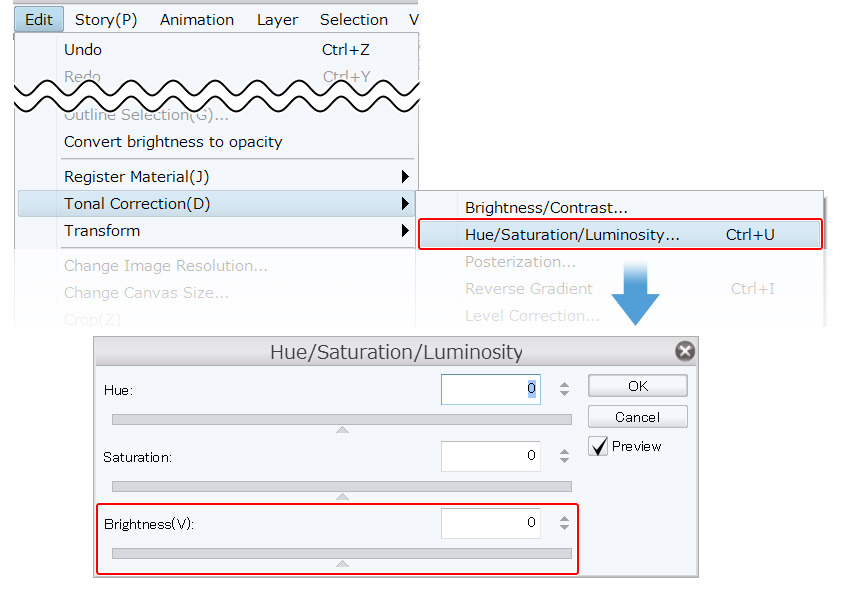 ■2. I add a new layer on top of the flat color layer, and paint with the [Watercolor] > [Dense watercolor] brush in a color slightly darker than the base color to paint the pupil and to add shadows at the top of the eye. 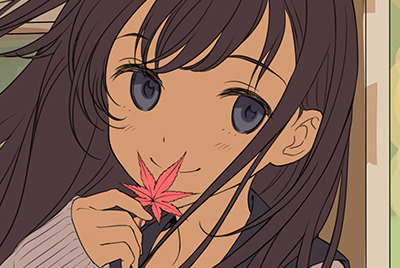 ■3. Then I make another layer on top of this and set the [Blending mode] to [Overlay]. On this layer I add brighter colors at the top, bottom, and center of the eye. 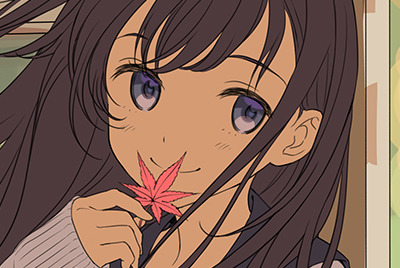 You can change the blending mode of a layer at the top of the [Layer] palette.

While selecting the layer or layer folder that you want to change, click the drop-down list of blending modes and choose the effect you want.

■4. I make a new layer above the line art of the character, and use the [Pen] > [Mapping pen] tool to add highlights to the eyes. 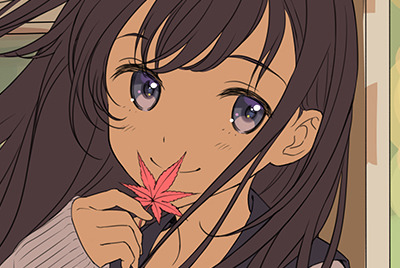 ■5. I make a new layer under the “Eyes” layer folder, and paint the white part of the eyes using the [Watercolor] > [Dense watercolor] brush. 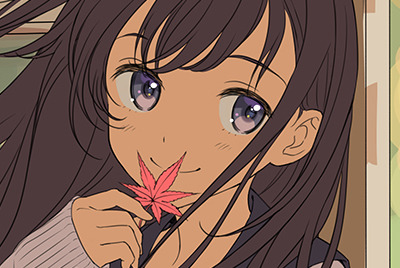 ■6. I select the layer with the whites of the eyes and click [Lock Transparent Pixel] at the top of the [Layer] palette. Then I paint the shadow on the eyes using a slightly darker color. 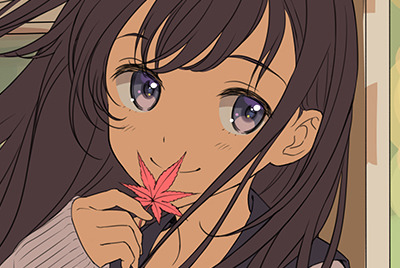 Now the eyes are finished.

When the [Lock Transparent Pixel] function is on, you can only draw on the parts of the layer that are already drawn. You cannot draw on the transparent pixels. By turning this feature on, I can paint on top of the base colors without going over the edges. 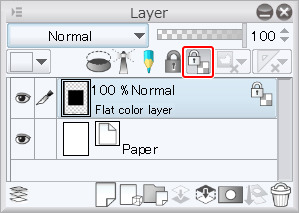 Next I paint the skin.

I make a new layer on top of the flat color layer and turn on [Clip at Layer Below], then gradually add more layers on top as I paint. This method is the basic foundation of layered painting.

■1. On this new layer, I use the [Airbrush] tool > [Soft] to color her cheeks and mouth slightly redder than the base color.

Adding color to the joints and places where the skin is thinner also increases the sense of cuteness. 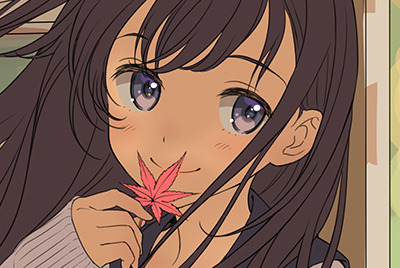 This sub tool draws soft and airy lines typical of an airbrush. You can increase the brush size for a softer gradation.

■2. I create another layer and set the blending mode to [Multiply]. Using the [Watercolor] > [Dense watercolor] brush, I add shadows for a three-dimensional effect.

I use the [Dense watercolor] brush to shade relatively larger areas such as the neck or her clothes.

I use the [Transparent watercolor] tool to add gradation to shaded areas, as well as to add light shadows to more detailed areas such as the face and fingers.

I wanted the picture to have an overall feeling of calm and make the vivid red of the fall leaves stand out, so I painted shadows with low brightness. I often adjust the color of the shadows after I’ve finished painting everything so that the illustration is well-balanced.

Rather than rough overall shading, I painted certain parts like the eyes and fingertips with detailed shading for a sense of realism. 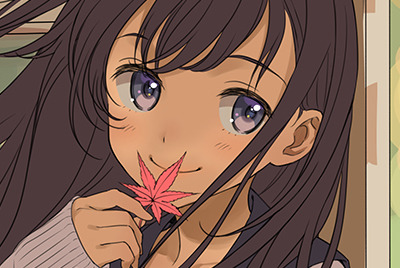 On the face, to draw the viewer’s gaze to the character’s eyes, I made the shadows of the eyes darker and used light shading on the rest of the face.


■3. I make a new layer and use the [Watercolor] > [Dense watercolor] brush to add the highlights on the skin (parts hit by sunlight), while referring to my rough color sketch, to increase the three-dimensional effect. 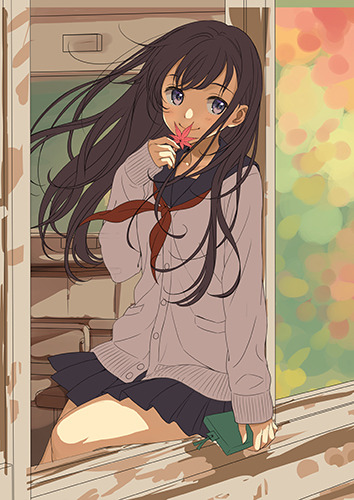 ■4. I thought that the skin looked a little dark, so I created a new layer just above the flat color layer for the skin and used the [Airbrush] tool > [Soft] to add a lighter color and make the skin look a bit brighter. 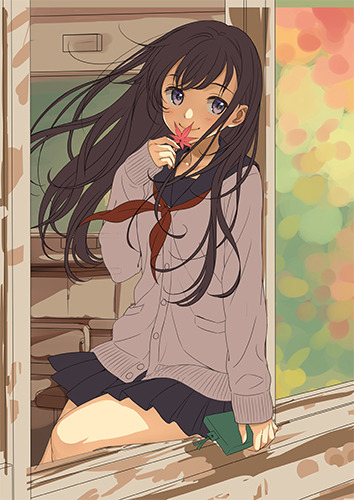 ■5. I felt that the color for the whites of the eyes didn’t quite match with the skin tone, so I went to the [Edit] menu > [Tonal Correction] > [Hue/Saturation/Luminosity] and adjusted the color to better match.

I also changed the highlight in the eyes and added a highlight on the lips to make them shine. 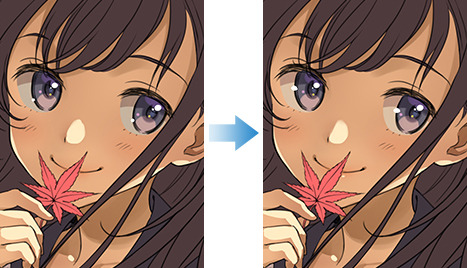 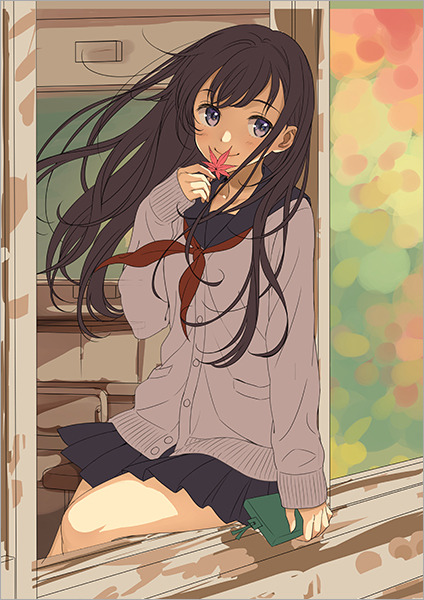