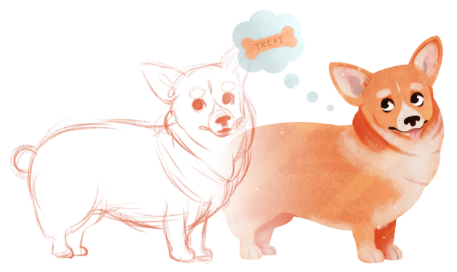 In this tutorial I'll be showing you how I went from my rough sketch to my finished coloured lineless illustration.

Initially I created a sketch, making sure to use a reference (Google Images or Pinterest are a great resource, make sure you use them!) in order to maintain some accuracy while also being stylized. I used a textured pencil brush and a warm colour for my sketch; as I like my work to be very bright and warm, by using a warm colour to sketch with, when I set my sketch layer to multiply it'll make it easier for me to colour pick colours and keep the illustration cohesive. 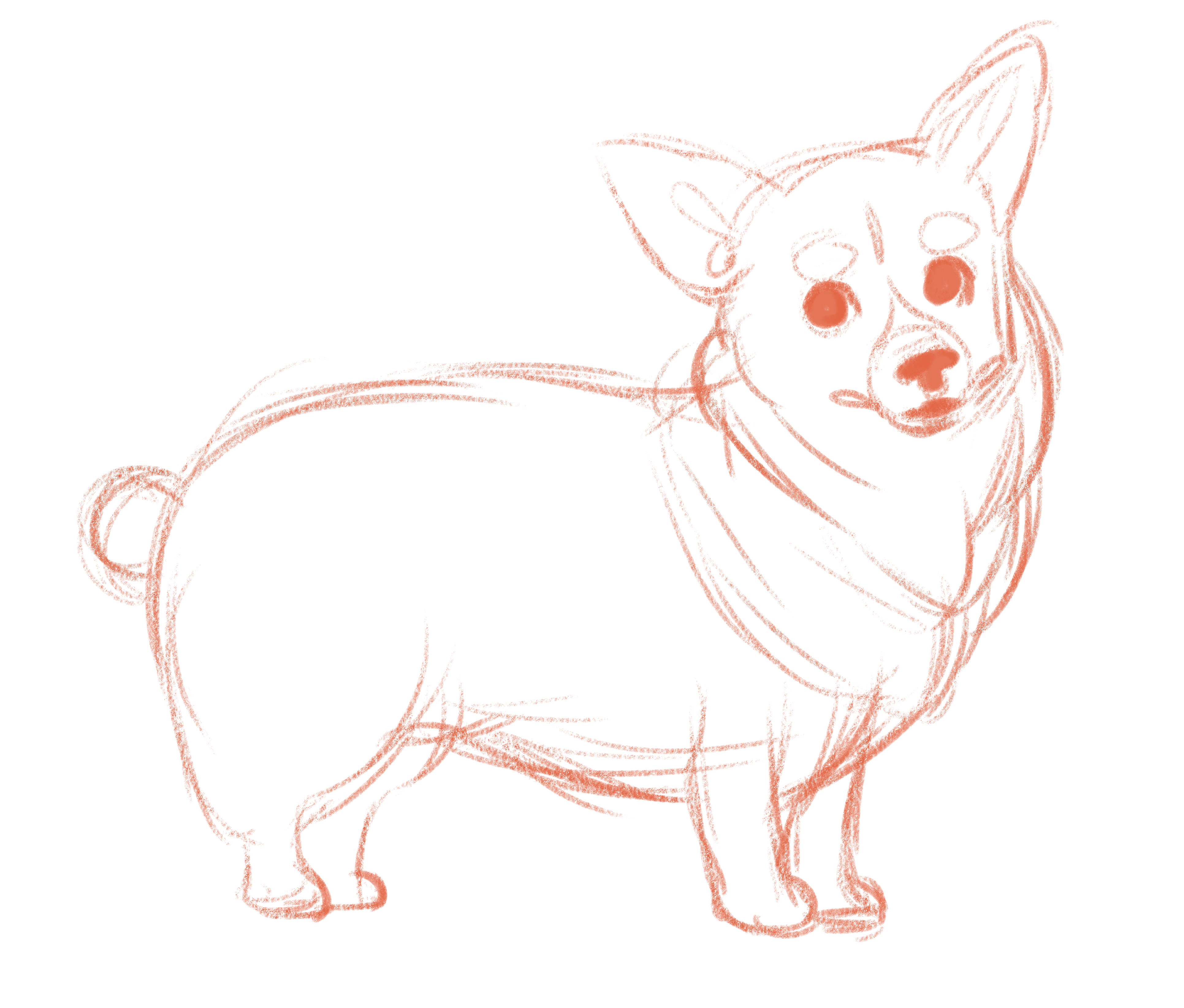 For this tutorial I'll be using three brushes, a hard round brush, a textured pencil brush and a large chalk brush.

I use a brush called the Cel brush which is from a free pack, but alternatively you could also use a pen brush that comes included with Clip Studio Paint. I use this brush to block in my initial shape which I'll then work on top of, using clipping masks to stay within that initial shape.

To sketch and add finer details (such as the face) I use a textured pencil brush called Opaque 1 that can be found in the pack below. Alternatively you can use a pencil that comes included in Clip Studio Paint. 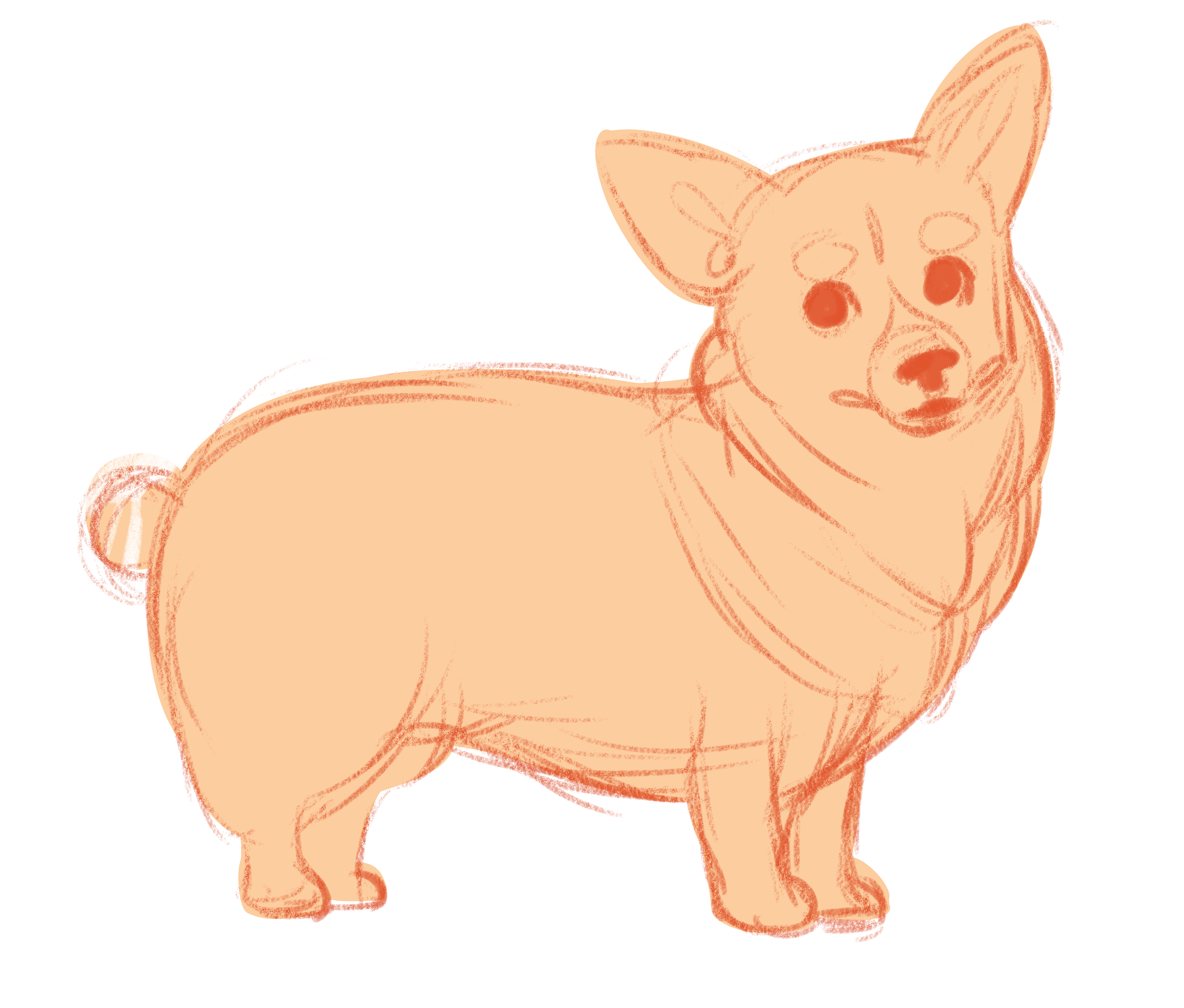 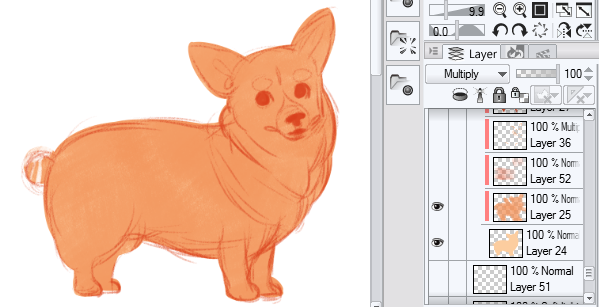 Choosing a slightly darker orange shade than the one I chose for the initial shape I, I created another layer and using the Opaque 2/pastel brush I roughly coloured over the shape (using a clipping mask to ensure nothing went outside the shape). 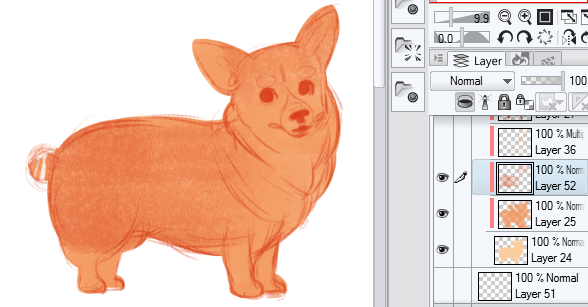 I then created another layer and clipped it to the layer below, using the colour picker and my multiplied sketch layer colour to choose a darker orange tone. Still using the Opaque 2/pastel brush, I shaded the back half of the corgi along with the top of his head to add some more subtle texture to my illustration.

Creating a new layer and colour picking from the now darker colour of my multiplied sketch I used a darker orange and the Opaque 1/pencil brush to add in some finer darker details to places such as the back legs, where fur folds around his neck, the edge of his face, the top of his eye socket and the tips of his ears. This creates more form and dimension in the illustration and will help with the readability of the illustration when we hide our sketch layer at the end. 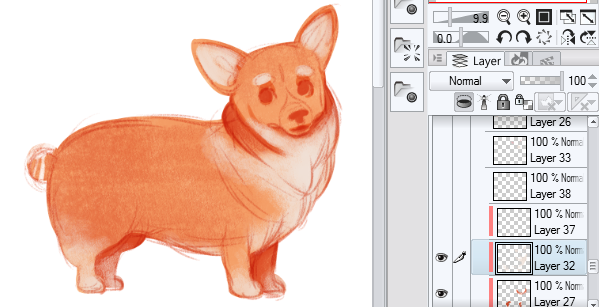 For the next step shading I chose an cream/off white and on a new clipped layer I used the Opaque 2/pastel brush to softly add in markings on his paws, midsection, eyebrows and insides of his ears. Make sure to use references to see where to place any markings that your chosen animal/pet has. 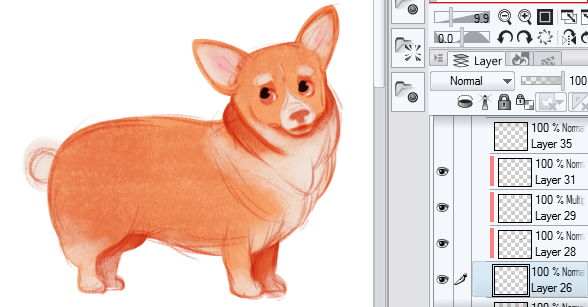 Continuing to add more details with the same brush I also add in more facial markings between his brows and on his snout, adding in a soft fuzzy tail and then use a light pink colour to shade inside his ears. After this I create a new layer (not clipped) and use a white to block in his eyes using the Cel/pen brush. I then create a new layer for his eyes, the shadow of his eyes (on a multiplied layer) and then a small white dot in each of his eyes for the light reflection and then clip them to the white eye shape layer. While doing this make sure to hide the sketch layer and move about the eyes until you're happy with the placement and the direction your animal is looking. 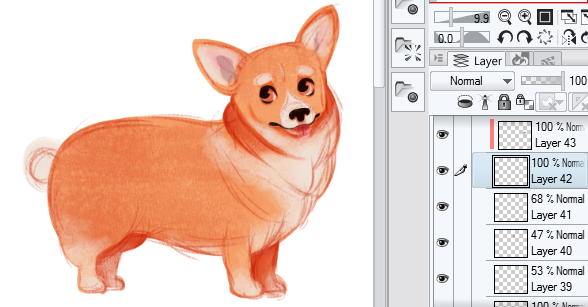 Still using the small Opaque 1/pencil brush I continue to add in smaller details on the face such as the nose, mouth, tongue and insides of his ears. Make sure to either hide your sketch layer as you progress or lower the visibility of the sketch layer so that you can check the placement of your lines and how it will read when the sketch layer is hidden at the end. 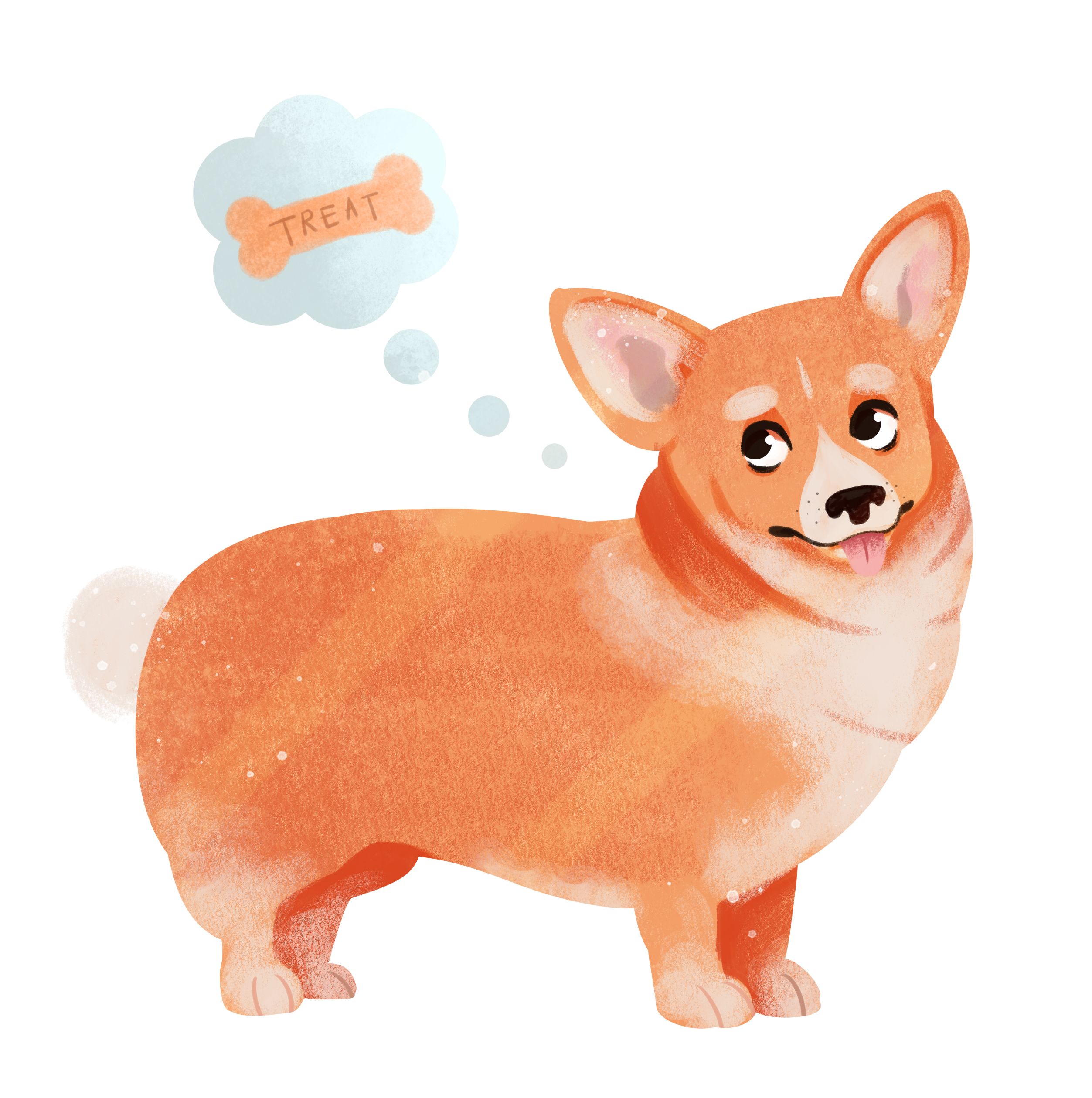 Finally I hide my sketch layer and add in a few more small details such as the treat thought bubble, some light strips and paint splatters that I like to include in my illustrations. This technique is easily applied to other animals, have fun with different breeds!