The [Saturated line] tool is used to create action lines (saturated lines), which are often used in comic art.

You can create a wide range of action line effects using the [Saturated line] tool. 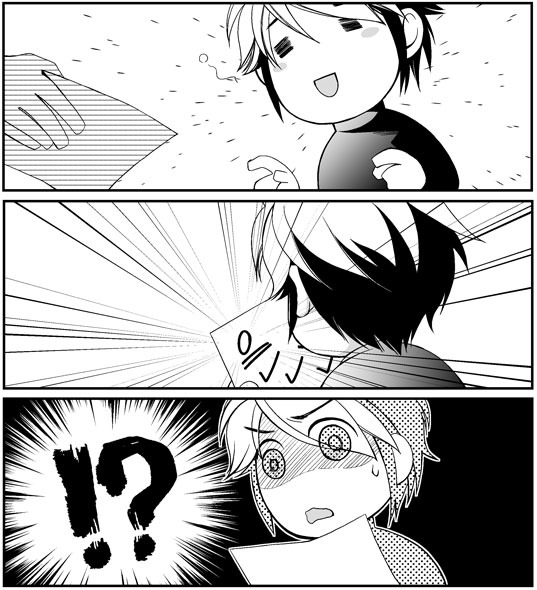 You can adjust the line width and density of your action lines using the [Tool Property] palette to instantly create all kinds of action lines that would be be time-consuming to draw by hand.

Action lines are an essential part of comic art, so take your time to master this tool!

[1] Where is the saturated line tool?

First, find the [Saturated line] tool within the [Figure] tool, which is stored on the [Tool] palette by default .

* In the initial settings, the tool icon of the [Figure] tool is the [Straight line] sub tool. The displayed tool icon depends on the tools you use, so a different icon may appear here. 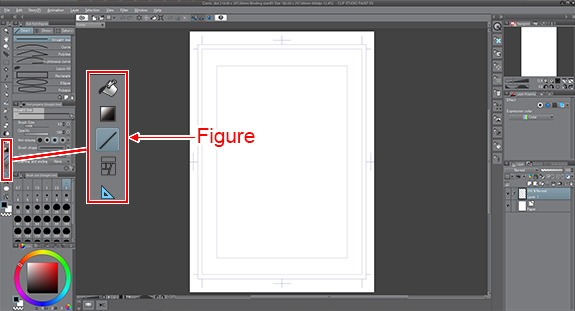 Select [Saturated line] in the [Figure] tool to display the sub tool for creating action lines.

[2] How to create action lines

Now that we know where the [Saturated line] tool is, let’s try using it!

First, we will use the [Scattered saturated line]. 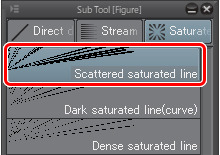 2. Drag outward from the center of the middle line to draw the action lines.

This will create the action lines!

A [Saturated line layer] is automatically created when you draw action lines.

(This depends on the tool option settings. * Please refer to “[3] Saturated line settings” for further details.) 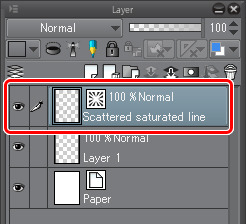 This method creates action lines that cover the whole sheet. However, you would usually create a selection area or create action lines in the frame folder.

Refer to the following article to learn how to make a selection range.

Refer to the following article to learn how to make a frame border folder.

Now that you know how to make action lines, let’s look at the tool properties of the [Saturated line] tool. 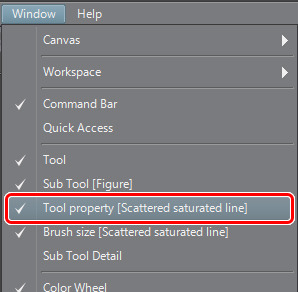 As suggested by the name “scattered,” the lines are dense in some places and sparse in others, with reasonable spaces between them.

This is the [Tool Property] settings for [Scattered saturated line]. 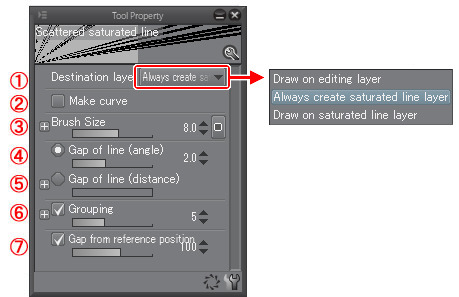 ① Destination layer: This specifies which layer to draw the action lines.

POINT: What are the base line. shape line, and center point?

These three items are not usually visible. To show them, first select the [Saturated line layer] on the [Layer] palette. 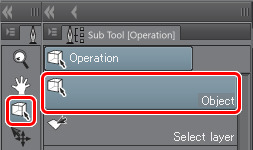 The base line, shape line, and center point are now visible!

You can move or transform existing action lines using the base line, shape line, and center point.

These terms will appear frequently in the following explanations, so keep them in mind for later!

Draw on the currently selected layer.

The [Saturated line] tool can be used to draw on different types of layers including raster layers, vector layers, and tone layers. However, you will not be able to make further adjustments if you draw action lines on a layer other than a [Saturated line layer]. (This is because the base line, shape line, and center point will not be created.) 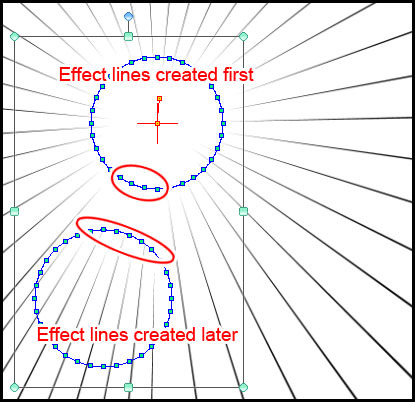 Check this box to add a control point for curving the shape line of the action lines.

Select [Operation] tool > [Object] after creating action lines to display the shape line. You can curve the action lines by moving the control point in the direction of your choice. 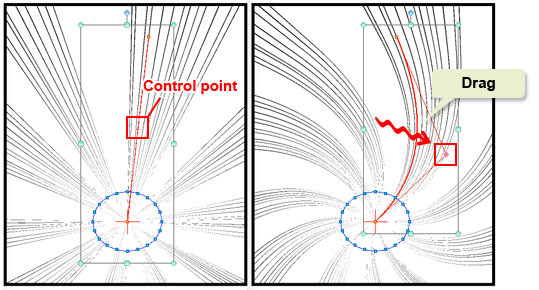 This sets the thickness of the action lines.

This sets the gap between adjacent lines based on the center point. You cannot alter this when [Gap of line (distance)] is selected. 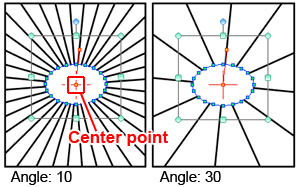 Sets the gap between the neighboring lines based on the base line. You cannot alter this when [Gap of line (angle)] is selected. 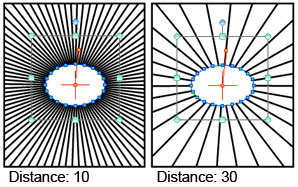 Check this box to create a [Grouping] of lines. Gaps will appear between the [Grouping], and the intervals will be wider than usual. Set the approximate number of lines in one [Grouping] by adjusting the slider. 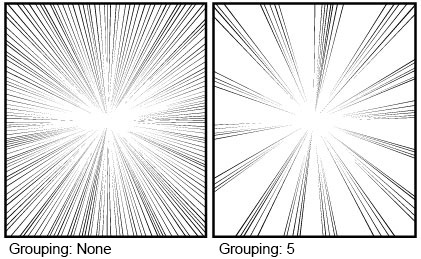 Unlike other action lines, it is drawn using a curve selection method. 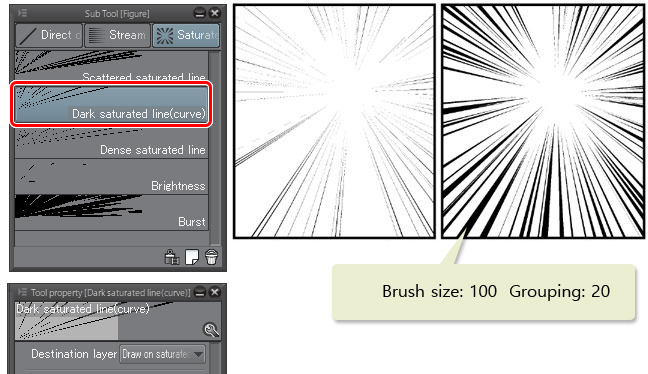 [POINT] What is curve selection?

Curve selection is when you create a base line with a curve instead of a circle.

Every time you click on the canvas, an anchor point is created. The base line curves based on these anchor points. Double-click to end the selection.

Slightly different action lines are drawn. This a unique method of drawing, so it may take some time to master. 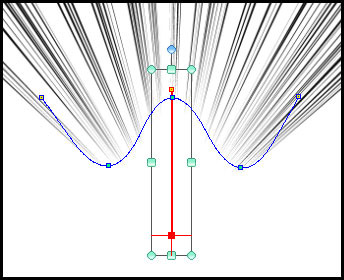 Check the [Make the reference position jags] option to draw some of the action lines close to the center point. 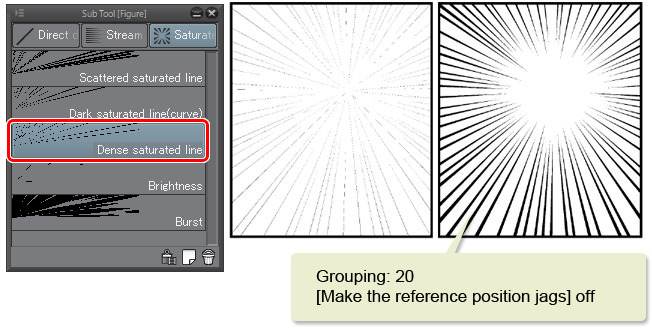 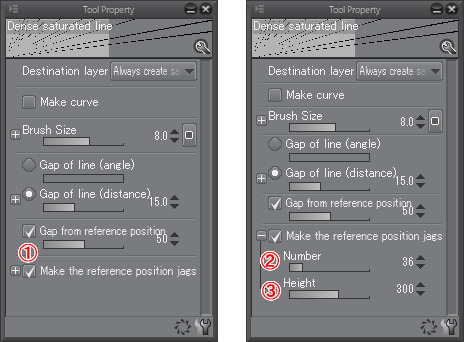 This sets the number of jags in the drawing positions if [Make the reference position jags] is checked.

This sets the height of jags at its drawing position. The larger the value is, the sharper the jags become. 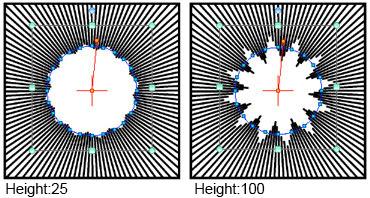 In the initial settings, this creates a bright atmosphere or an effect like rain falling. However, you can also make an effect like a huge explosion by slightly changing the settings. 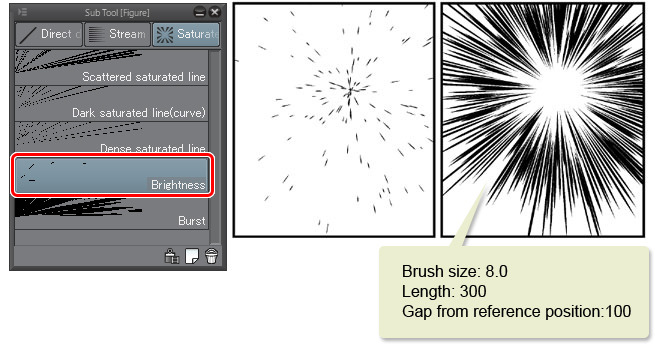 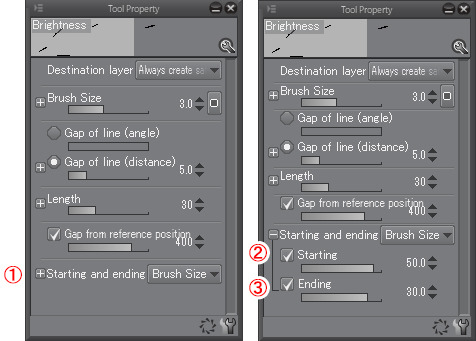 Adjust the tapering of the action lines. “Starting and ending” refers to the effect of creating a difference in thickness (tapering) at the start and end of the lines.

Select whether to taper the start of the lines or not, and adjust the value of the taper.

Select whether to taper the end of lines or not, and adjust the value of the taper.

In the initial settings, this creates action lines similar to an explosion or a burst. You can adjust the settings to create a flash in the shape of a sea urchin. 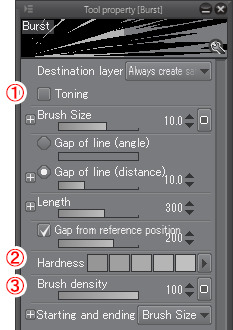 Change the action lines into screentones. The number of screen frequency for tones is 60 lines in the initial settings, but the value can be adjusted from the [Layer menu] after drawing it.

Change the amount of blur on the brush tip. (The lower the value, the more blurred it is)

Change opacity of each pattern.

If the hardness of brush density settings are adjusted to become softer or less dense, gray areas will appear on the action lines. Be aware that in black-and-white manuscripts for printing, the gray parts may cause interference patterns.

In most cases, changing the action lines to screentones (①) will solve this problem.

If you use [Toning] when the [Hardness] or [Brush density] are set to maximum, you can get some interesting effects. Have fun exploring the potential of these settings! 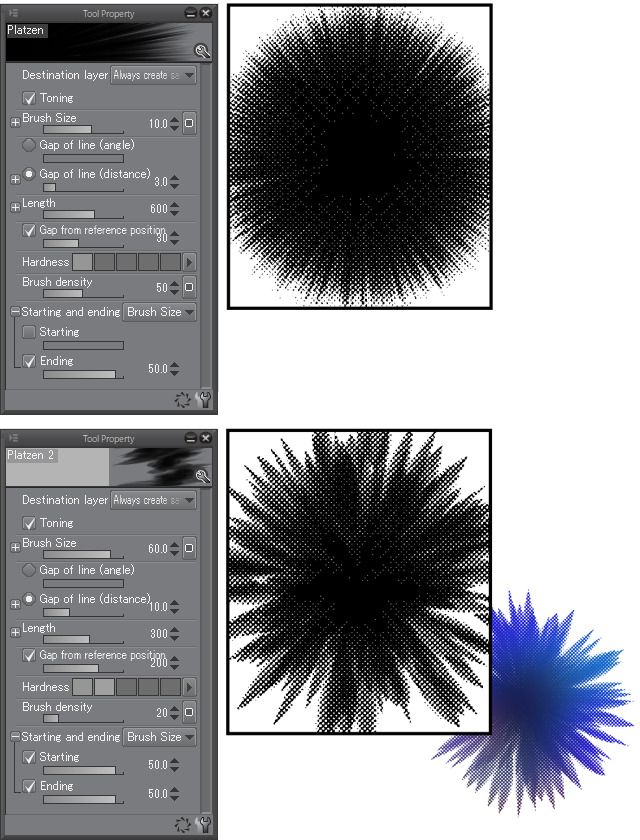 ▲ This looks like a flower. It looks even nicer in color, don’t you think?

My name is Sahara. I make explanations so that beginners to graphics software can understand it easily. I like to draw manga and play video games.