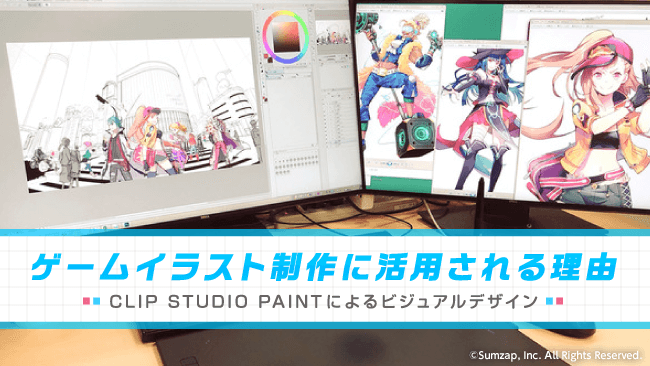 
CELSYS's illustration / manga / animation production software “CLIP STUDIO PAINT”, which is popular with many creators.
It is known that it is used by many professionals as well as individual users who work for creative activities. How are they actually used in the creative field?
A report on the “Visual Design Case Study by CLIP STUDIO PAINT” of “CEDEC 2019” held at Pacifico Yokohama from September 4th to 6th, 2019 will be delivered.


* This article is in Japanese. Machine translations are available at sites other than Japanese.

First of all, from Samzap, director Shinichi Iida and illustrator Yuka Morita gave an example of the production site of the smartphone game “Linkslings” developed and distributed by the company.

In the same work, CLIP STUDIO PAINT is used in the production of all illustrations, and Photoshop is also used in the final process. 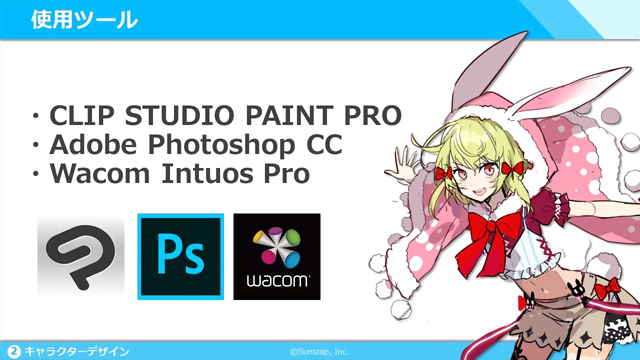 Mr. Iida said, “Linkslings is not only a fight, but also a project that starts with a game that is not just a battle.” It was a major premise for making decisions. ” 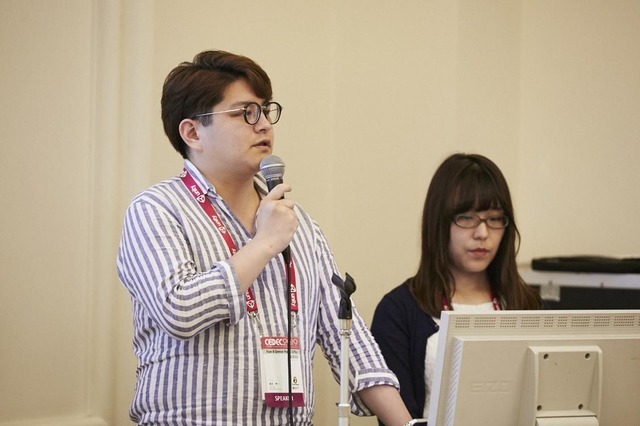 The requirements presented to Mr. Morita who handles the character design are “design that matches the character's performance and appearance”, “design that is conscious of the view (look) so that the game screen can be seen”, “ The design was designed to be easy to spread so that it would be liked by people.

Mr. Morita introduces examples of the design of the retreating girl, Lulu, adjusted to match the voice actor's performance, and a design that makes it easy to convey that Feifei is a drunk fist. In addition, the image color of speed type = blue, technique type = green, power type = red is set in this work, but it does not stick to it too much, and the type of each character is suppressed to a level that can be recalled somehow It seems that the design freedom was secured. 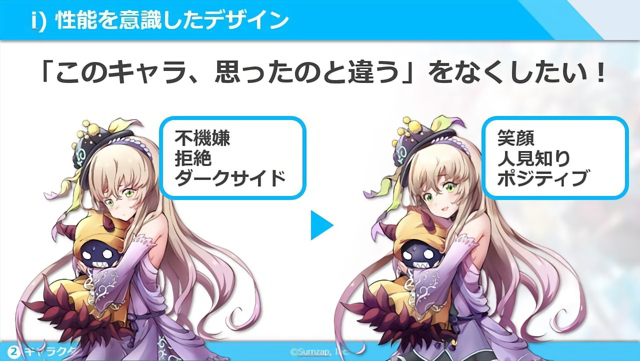 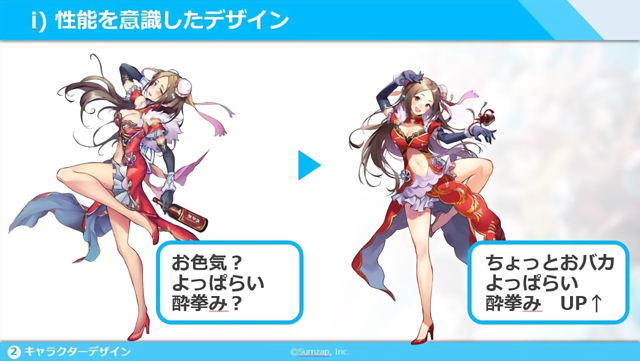 As for “view-conscious design”, the characters are displayed with deformed heads and bodies in the game, so they are differentiated by color or silhouette.

The last “Design for Ease of Spreading” was handled by setting items that symbolize each character's face near the face. In this way, it will be easy to recognize even if new character costumes are implemented, and it will be easier for users to capture the features when enjoying fan art and cosplay. 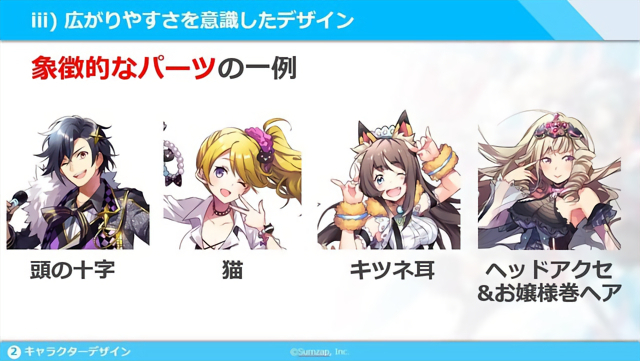 Next, the production process until two key visuals were drawn was introduced. The company defines key visuals as "the first thing a user sees about the game" and is required to convey the charm and cucumber of the work.

On that premise, Mr. Iida said to Mr. Morita that “it is fun and dynamic”, “a lot of cute and attractive characters are drawn”, “the fact that it is a 4 to 4 battle game”, We also directed the illustrations to convey the fact that “this is not a so-called fantasy mono RPG” and “the battle is not the main”.

In response, Mr. Morita proposed that “visuals with some sort of selection can be made more attractive than satisfying all conditions”. After trial and error, the following visuals were completed. Design that vivid characters are facing the same direction by expressing it as a camp game with red and blue lines designed in the background, without sticking to visualizing `` 4 vs 4 '' Is realized. 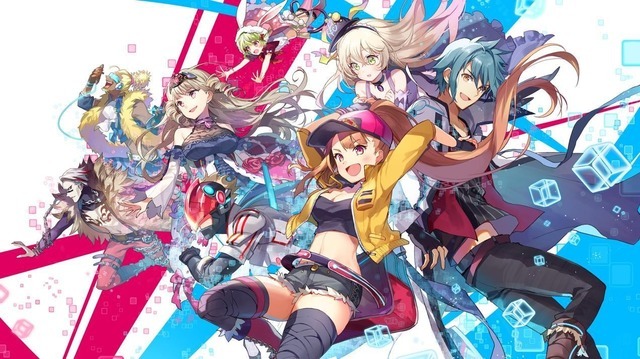 In the second key visual drawn after that, we received a suggestion that “it makes people feel closer by feeling the world they are in, not just the characters”, and everyday in the world under construction An illustration that cut out the act of is drawn. 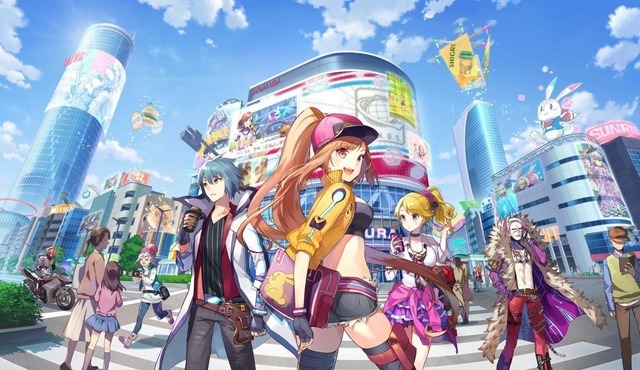 The initial proposal for the second key visual. The background for this illustration is produced by Photoshop, the character, and the overall finish by CLIP STUDIO PAINT. During the production, a composition change that made the character look larger occurred, but CLIP STUDIO PAINT can move, enlarge, and reduce the layers in the layer folder at once, so it seems that it was able to respond flexibly to such changes. 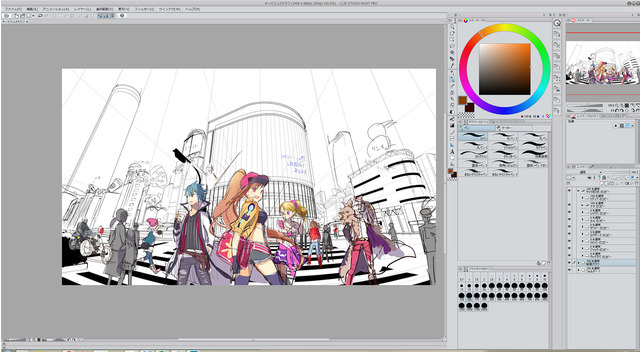 Mr. Iida finally said, "If the game is solidified first, it is desirable to think about the concept of how the character expresses it and how to convey its charm", "Characters touch the game "It will be an important" entrance "", and "Key visuals are important to carefully select the requirements and focus on what you want to express" and concluded the seminar. 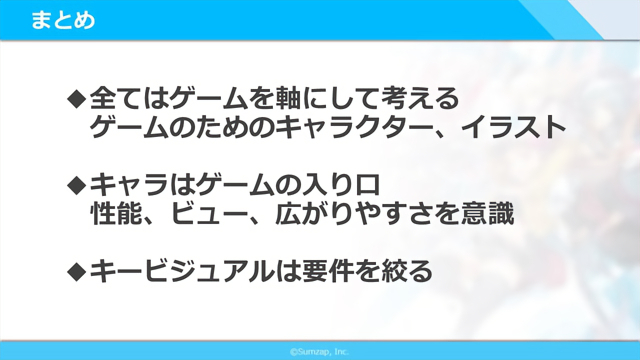 Use cases in the field of joint production by multiple artists

Next, Mr. Kenji Kaji, an app bot who works as a creative director in the smartphone game "Joker-Gang Road-" (hereinafter "Joker"). Lectures on the theme of “Manga production in a company whose main business is smartphone games” were presented. 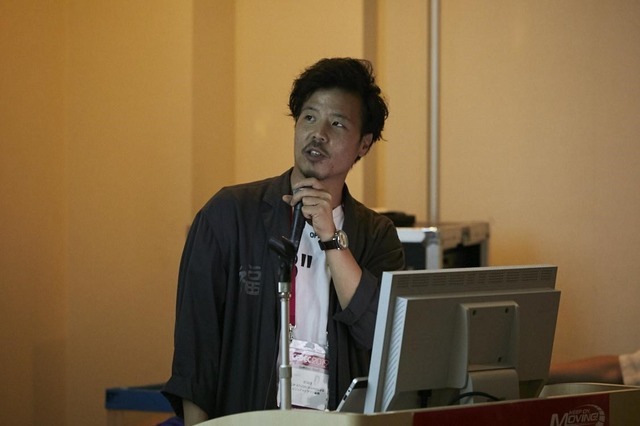 Applibot also has the manga production department “MAGNA”, which mainly produces and distributes smartphone games, and Mr. Koji is responsible for it. The company ’s smartphone game “Joker” is a unique “manga-based smartphone game” style that allows many fans to read the manga and enjoy the story as the story hits the battle. I'm grabbing my heart.

Mr. Kaji said the reason why smartphone game companies handle manga themselves: “Games and manga are actually high in affinity. It is important to be able to sympathize with games and manga. (Reading) isn't fun too, and to get empathy, it ’s important to get immersed in the work first. ” 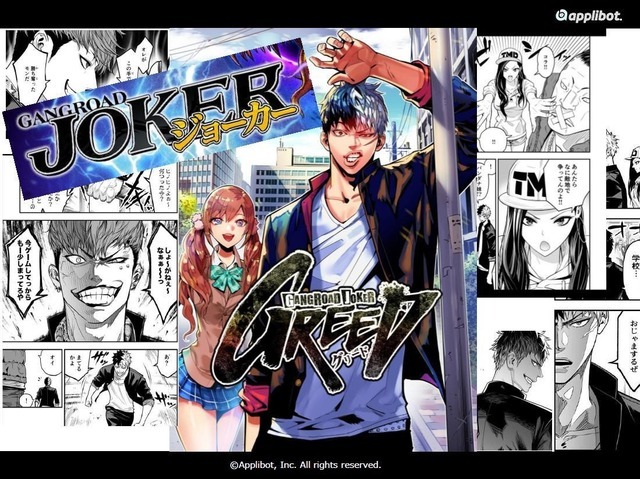 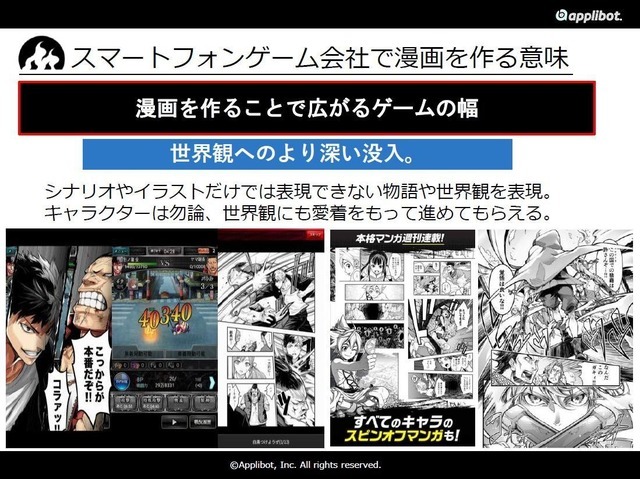 Regarding the unique method of mixing games and manga, “Manga is one of the cultures that Japan is proud of. It is easier to convey the charm than drawing the story as a game. There are also. "

The aim was a success, and Joker's DAU (the number of active users) seems to have increased significantly since the start of the manga series. In this work, the release interval of multiple comics is used separately for weekly, biweekly, and monthly, and it controls the day when DAU rises (the day when the user comes to read the latest comic story). It seems that it has become easier to launch measures such as various in-game events. 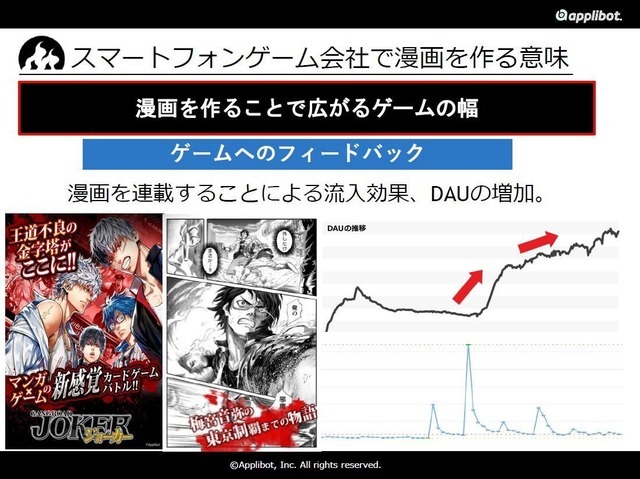 That's why CLIP STUDIO PAINT is used in the production of manga that has become indispensable for Joker. MAGNA, which has more than 50 manga artists, employs a style in which manga is produced by multiple people working together. “Thanks to the collaborative work function of CLIP STUDIO PAINT, Mr. Kaji is able to open a single work file with multiple people at the same time, and work while confirming who is getting their hands. It has become an indispensable software for drawing manga, "he once again talked about its appeal and summarized the lecture. 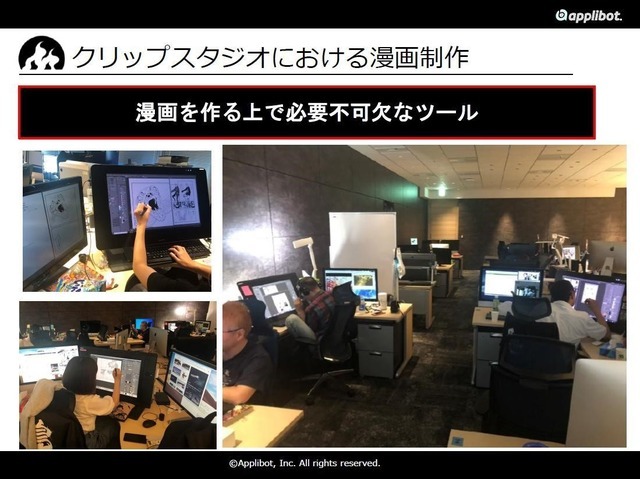 * Details on the collaborative functions are explained in the following courses.


How is CLIP STUDIO PAINT used in game production? Also, how is it used? In the next chapter, after the above seminar, we will deliver an interview with Samzap's Mr. Iida and Mr. Morita.

In the “CEDEC 2019” seminar “Visual Design Cases by CLIP STUDIO PAINT”, Samzap director Junichi Iida and illustrator Yuka Morita talked about examples of using the software on smartphone game production sites. We had time after the seminar and asked for a deeper story.


――When did your company introduce CLIP STUDIO PAINT?

Morita: I joined the company in 2018, but I heard that Samzap introduced it from the project before “Linkslings”. We also hear that CLIP STUDIO PAINT is being used in large titles for smartphones of other companies in the same industry. 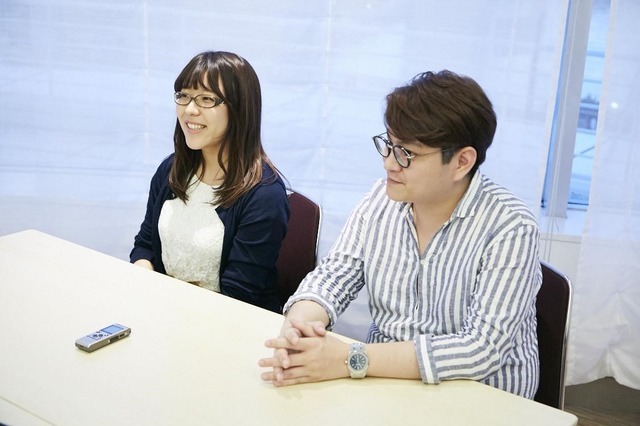 ――Where do you think CLIP STUDIO PAINT is attractive?

Morita: Do you say it's kind to beginners? I think the ease of use at the time of introduction is one of the great attractions. There is an image that anyone can use to some extent as soon as the software is started. Also, what is the biggest attraction to you personally? The feel of CLIP STUDIO PAINT is really good, and I always think that it may not be possible even if I say "Draw the same picture with other paint software". 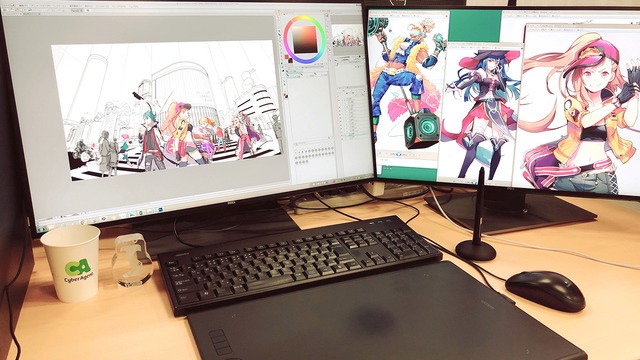 I also love the lightness of the brush. When painting, I usually paint it roughly with an anime-painted touch and then stretch it with a watercolor brush, but CLIP STUDIO PAINT can do these colors with very light behavior. The point is also useful. 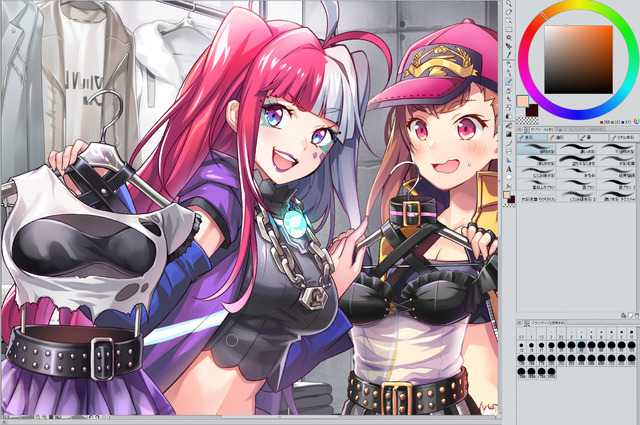 ――CLIP STUDIO PAINT uses machine learning, and various functions have been added since the end of 2018. Are there any functions you are interested in?

Morita: I haven't used it at work yet, but the automatic coloring function is one of the functions I look forward to in the future. When new features are added, it will be a hot topic. Is smart smoothing the most worrisome personally?

Iida: That's right. For example, when exhibiting at events such as the “Tokyo Game Show”, a large resolution image is required. However, it is not easy to draw illustrations at a resolution that allows you to make a life-size panel of anything because it may be necessary in the future. I'm looking forward to seeing how easy it is to deal with such a situation. 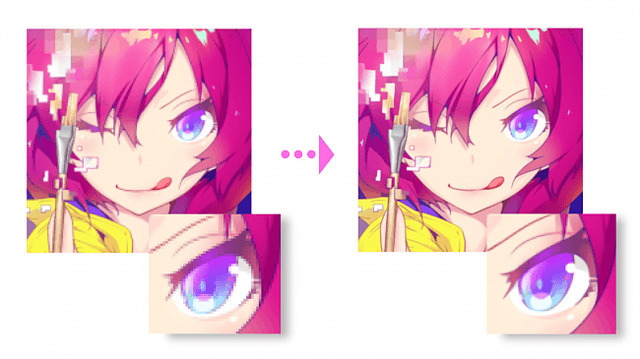 ▲ Smart smoothing function installed as a preview version in CLIP STUDIO PAINT Ver1.9.1 released in July 2019. Roughness caused by changing the image resolution or enlarging the image can be reduced and converted into a beautiful image. It became an official function in Ver1.9.4 released on September 26.


――Lastly, please tell us if you have any features that you want CLIP STUDIO PAINT in the future.

Morita: I'd be happy if the free deformation function of the image will be enhanced. I felt that there was still room for improvement regarding this feature. Even when I was working on the second piece of the key visual that I showed at this seminar, I created the distorted large monitor in the background using Photoshop. It is a detailed point, but I'd be happy if it was improved and made easier to use.


CLIP STUDIO PAINT has been steadily increasing its presence in game production sites.
Although the game itself is mainly 3DCG like “Linkslings”, there are still many titles accompanied by the production of illustrations such as key visuals and image illustrations, and package visuals for console game consoles. Is expected to see even greater demand. 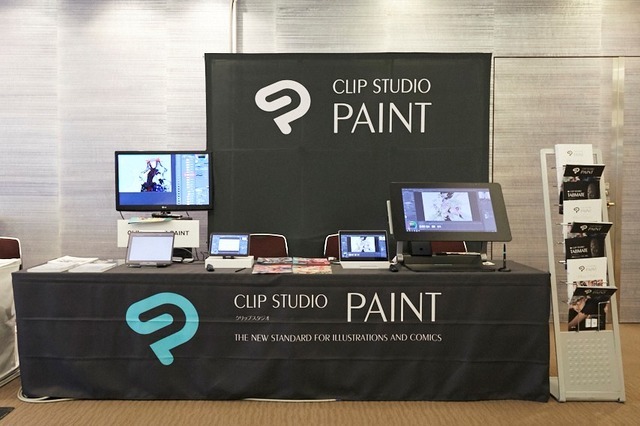 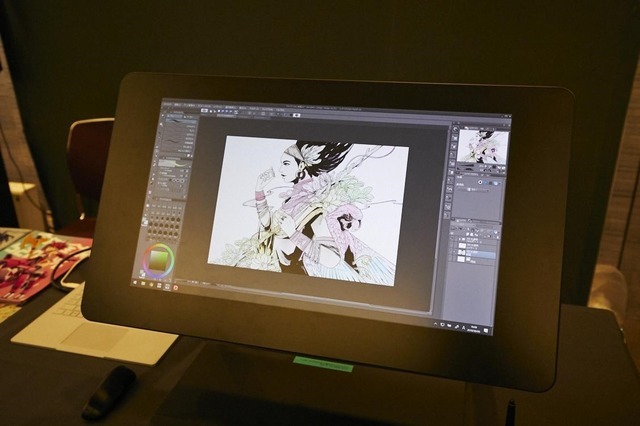 ▲ The automatic coloring function by CLIP STUDIO PAINT was demonstrated at the CELSYS booth.