[1] Effect sources that can be used for drawing tools. 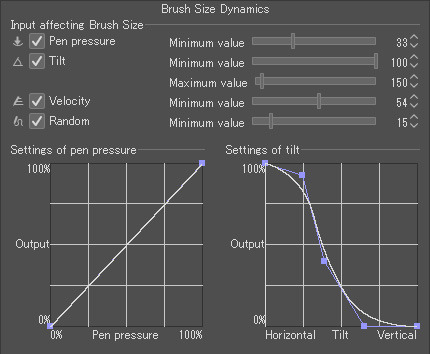 (B) When the graph bulges to the upper left, the output is large even when the pen pressure is low, so it will feel “soft”.

(C) When the graph bulges to the bottom right, the output is small even when the pen pressure is high, so it will feel “hard”.

The pen pressure depends greatly on individual preference and also on the features of the tablet device, so please adjust it to your liking.

Tilt : When using a pen tablet that detects tilt, the magnitude of the tilt is used as an input value.

Tilt, similar to pen pressure, can have its relationship between the input and output value configured in a graph.

Velocity : Velocity of the cursor is used as an input value.

Random : The input value is set to a random value.

* The items that are checked in the box on the left of each input are used as the effect source.

When each input value is at minimum value, you can configure at what percent the drawing will be effected given that the set value is at 100.

② Specify by size on screen : The size changes in proportion to the scale of the canvas. (The size of appearance in the display will always be constant.)

③ Minimum of 1 pixel : For example if the [Effect source] of the size is set to “Pen pressure”, at least one pixel is drawn so that the lines will not be interrupted even at a weak pen pressure. 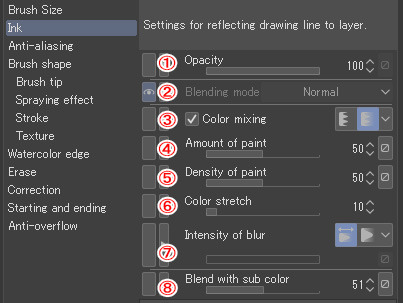 However, there are some that do not exist as blending modes for layers. (For details on the effects of the brush synthesis mode, see "Setting item list (alphabetical order)> I > “ink” from the “Sub tool setting guide”)

Brush blending mode only affects things drawn on the layer. (Will not affect the layer below) This can be configured if the [Mix ground color] is disabled.

③ Mix ground color: Draw while blending with the already existing color on the layer.

- Blend: Draw while blending all color you pass through.

- Running color: Draw while blending colors of the brush and the areas the brush passes through. 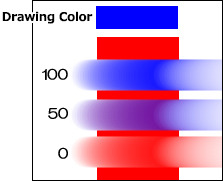 Center: When starting to draw from the background color, the drawing color will not be reflected at all.

Right: When paint density is set to 100, the brush paints color with the opacity set to the brush, regardless of the opacity of the underlying color.

⑥ Color stretch: Adjust how much of the initial color to use when starting a stroke above a ground color.

⑦ Intensity of blur: You can configure this when setting [Mix ground color] to “Running color”.

By enabling [Change brush tip color], you can change the hue, saturation, and brightness of the drawing color.

The higher the value, the greater the color change. 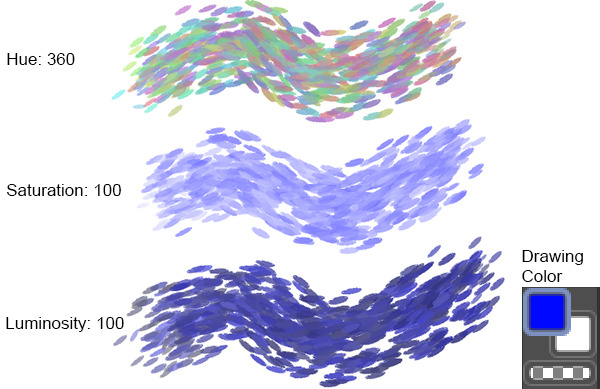 By enabling this, you can randomize the drawing color of each brushstroke.

The higher the value, the greater the color change. 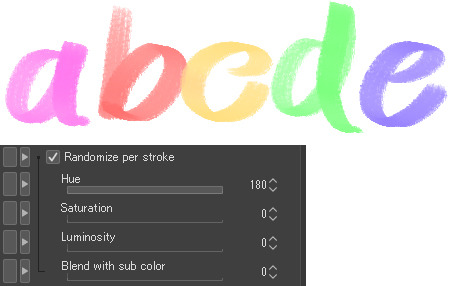 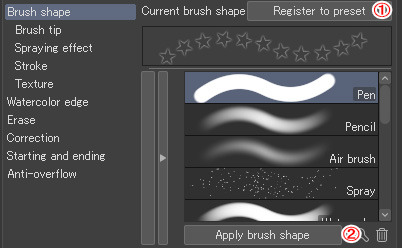 ① Register to presets : Register the current brush to the presets.

② Apply brush shape: Select and apply a brush shape from the presets. 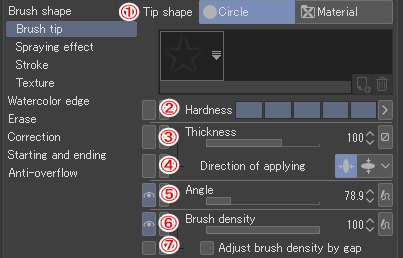 ① Tip shape : Select the pattern to use for the brush tip from “circle” or a “material”. Since it is possible to set your own patterns, you can create your own brushes as well. Depending on the setting, you can draw multiple types of patterns continuously with one brush. 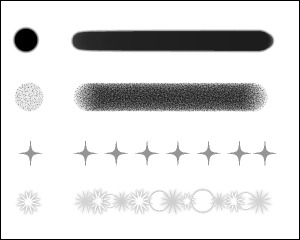 ② Hardness: At value 100, the edge is evident (hard) while at value 1, it has a vague (soft) touch. This is an item that can be configured only when the [Brush tip] is set to “Circle”.

③ Thickness : Adjusting the thickness of the tip image. “100” is the original thickness.

④ Direction of detection: Applying the setting of ③ in “horizontal” or “vertical” dimension.

⑥ Brush density : Adjusting the density of the brush.

⑦ Adjust the brush density according to the gap : When the interval get narrower, the density is lowered and the density of the drawing is adjusted as to become nearly constant.

[POINT The difference between Opacity and Brush density]

In [Ink] → [Opacity], you can configure the opacity of each stroke.

① Spraying effect: When activated, the tip image will scatter, similar to airbrush when drawing.

② Particle Size: Specify a size for the brush tip image. (This is different from the brush size.)

[POINT: The brush size and the particle size, when the spraying effect is activated] 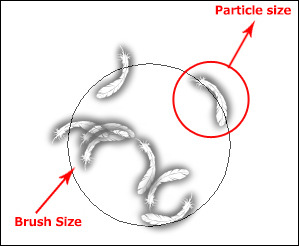 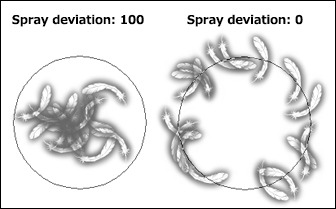 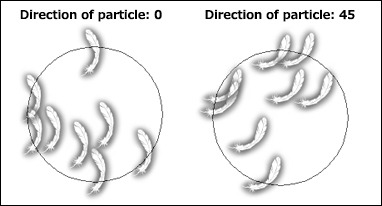 [POINT The effect source of the direction of particles]

While you can select the effect source for the direction of particles, the setting items will be different from others.

① None : Consistent (However, it becomes random when set to random.)

③ Direction of whole spray ： This sets it to the same as is the [Direction] of the [Brush tip].

④ Spray toward center ： Change the direction so that it is directed towards the center point of the spray. 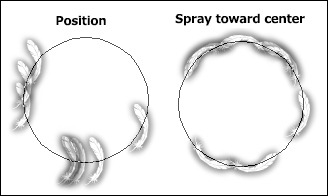 ⑤ Random : Changes the direction to random. You can configure the minimum value. 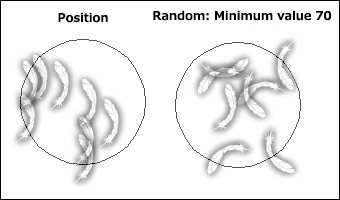 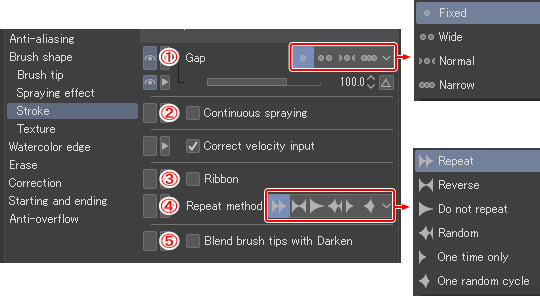 ① Gap : Adjust the gap of the brush. You can choose to adjust this with numbers or from “Wide” , “Normal” and “Narrow”.

② Continuous spraying : This will continue to draw while the pen is pressed down in the same location 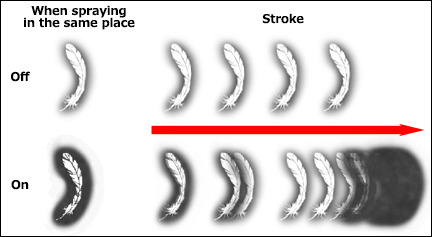 ③ Ribbon : Drawing is done while the image is transformed to match the line of the stroke.

④ Reverse : If multiple tip images are used for one brush, this sets the display order. 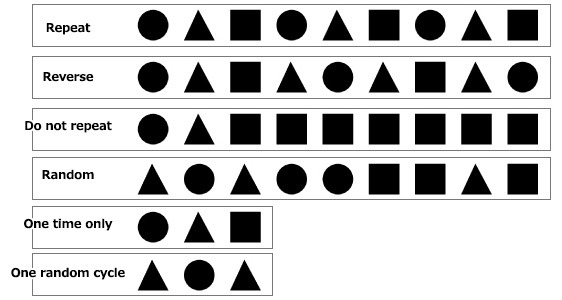 ⑤ Mix brush tips with darken : When the tip pattern overlaps, the overlap will be painted with a darker color.

This is an effective option when the tip shape is set to “Circle”. 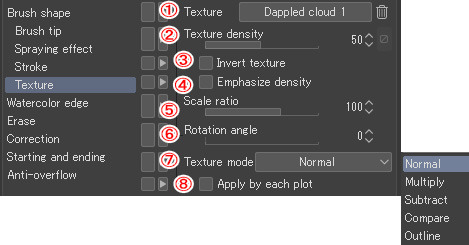 ① Texture : Clicking this shows the [Select paper texture material] dialog, and you can choose an image to use for the texture.

To set texture to “none”, click on the [Trash can] icon on the right. 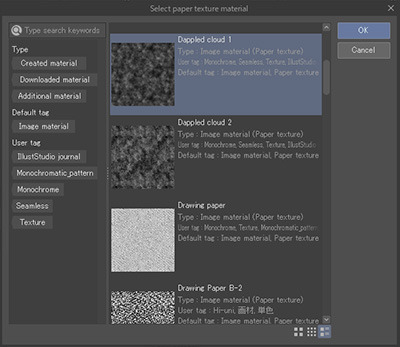 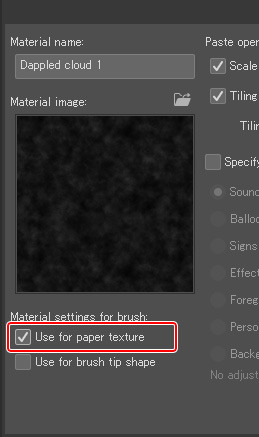 ② Texture density: Adjusting how densely you would like to reflect a texture.

③ Reverse density : Used by inverting black and white from the image.

④ Emphasize density : Used by emphasizing the shade of a color within an image. 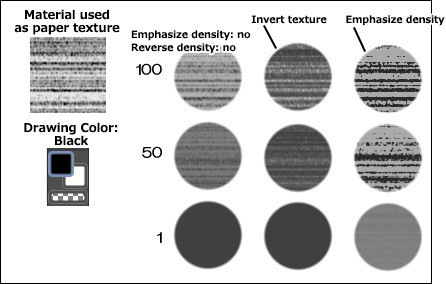 ⑤ Scale ratio : Scale the image that is used as the texture up/down.

⑥ Rotation angle : Rotate the image that is used as the texture.

⑦ Method to apply textures: Select the method to combine the line on which the texture is drawn.

The image of the drawn line may change even when using the same texture, depending on hardness, opacity and whether it is applied per spray or not.

③ Luminosity effect: Adjusting the brightness of the watercolor border. The higher the value, the lower the brightness. (It will become black.)

④ Process after drag : When this is set to “ON”, the watercolor border will not be applied while drawing, but only once the drawing is completed. 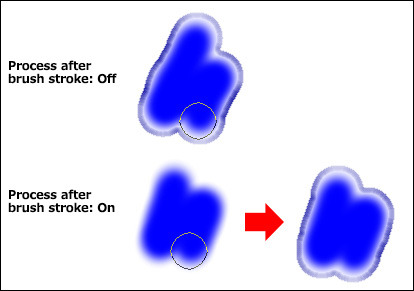 ⑤ Blurring width: You can configure this when the [ Process after drag] is set to “ON”. Blur the watercolor border. 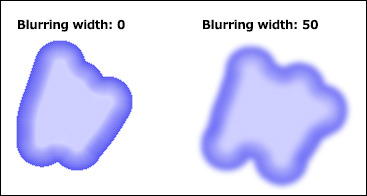 ① Vector eraser : Configuring how to erase on a vector layer.

② Refer all layers: This can only be configured in cases where [Erase up to intersection] is selected for the [Vector eraser]. When it is set to “ON”, you are able to refer to a vector layers other than the current layer.

③ Delete all layers: This can be configured, when the blending mode of the ink is set to “Erase” or “Erase (compare)”. When it is set to “ON”, this will erase regardless of which layer it is drawn on. 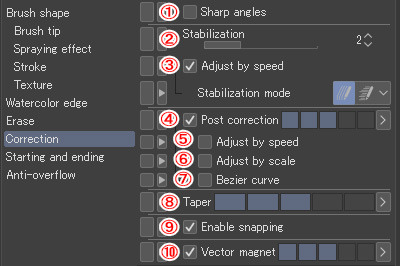 ① Make corners pointed: Make the corner pointed when a line with a corner is drawn. 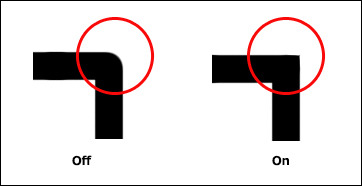 ③ Adjust by speed: When this is on, the stabilization level adjusts depending on the speed of the pen.

Depending on the value of the [Post correction], it is possible to correct a rough edged line as shown below into an extremely smooth line. 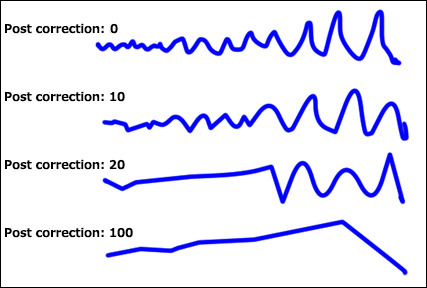 ⑤ Adjust by speed : If this is set to “ON”, the faster the drawing speed is , the stronger the correction becomes. In case you want to draw detailed parts thoroughly, it is a valid option, to not use the correction.

⑥ Adjust by display ratio: If this is set to “ON”, you can adjust the strength of the correction by its scale. The smaller the display scale is, the stronger the correction will be.

This is because when the display scale has a large value, it is most likely that for drawing a detailed segment a strong correction is not needed.

⑦ Bezier curve : If this is set to “ON”, the curve with correction becomes a Quadratic Bezier. When used on a vector layer, adjustments will be made using a Quadratic Bezier when adjusting a curve at a later time.

⑧ Brush stroke : When a stroke is ending with diminishing pen pressure, this adjusts how much easing out will follow. The larger the value, the longer it will ease out.

⑨ Able to snap : Configure snap setting for the ruler.

⑩ Vector magnet: When drawing near a line that is already drawn on a vector layer, this setting configures how it will attract another line. The larger the value, the stronger the snapping becomes.

① Starting and ending: These settings reflect the specified parameters of the “starting “ and “ending” of a line, regardless of the pen pressure.

Configure the [Settings of effect source of starting and ending] which is displayed when clicking on the button right to the “What and how to change”.

② How to specify: Specify an area for starting and ending (easing in and out).

- Specify length : Specify the area for starting and ending.

- By percentage : Specify the proportion when considering the length of a line is 100%.

- Fade : The value up to the minimum value within the specified length is gradually reflected. (You cannot configure the starting (ease in).)

③ Starting : When this is set to “ON”, the parameters change, depending on the range of the “starting”. Also, this specifies the area with a value.

④ Ending: When this is set to “ON”, the parameters change, depending on the range of the “ending”. Also, this specifies the area with a value.

<Settings of effect source of starting and ending>

In the parameters below, changes are made from minimum value to maximum value for “starting” and vice versa for “ending”. 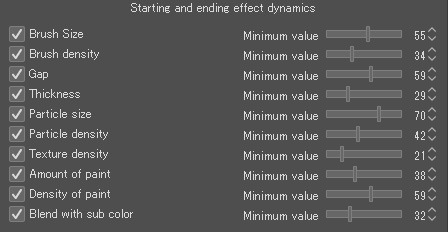 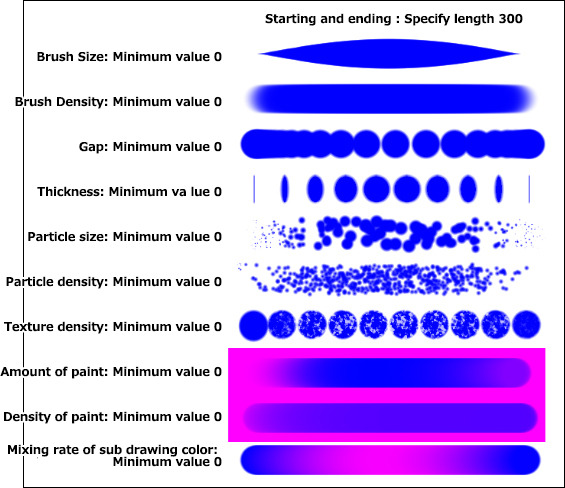 You can only configure this setting when ① is set to “ON”. This allows to paint without missing the tiny areas even when drawing on the vector layer with anti-aliasing. 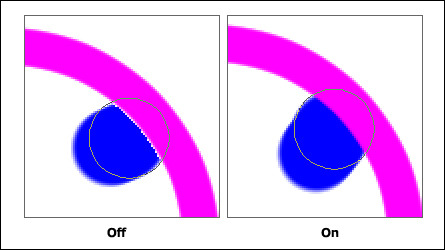 ③ Color margin: Specify the range treated as the same color. The larger the value, the more colors would be considered in the acceptable range. You can only configure this setting when ① is set to “ON”.

④ Area scaling: Configure how wide (or narrow) to make the area. You can only configure this setting when ① is set to “ON”.

In case the reference layer is a raster layer and anti-aliasing is applied on the drawing, it is possible to leave out painting the area that uses anti-aliasing. By slightly expanding the area, you can configure the settings so that the layer would be painted without leaving out any areas.

⑤ How to zoom: Specify how to zoom when ④ is set to “ON”.