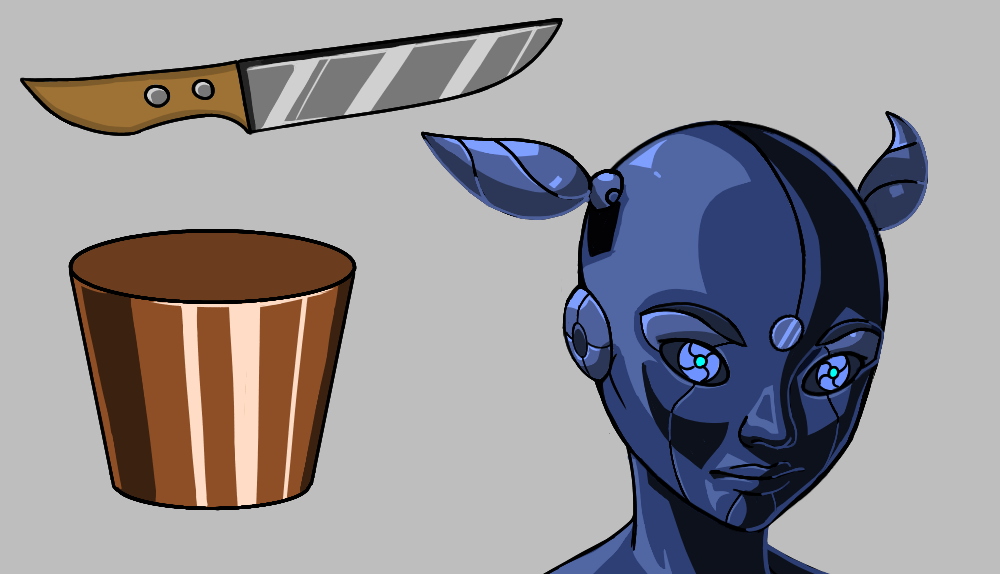 Hello everyone. I will be sharing some tips on how to paint 2d drawings of metallic objects using the cel shading technique in clip studio paint.

But first, what is cel shading?

Cel shading is a coloring style in which few colors are used in the coloring process instead of a shading gradient. 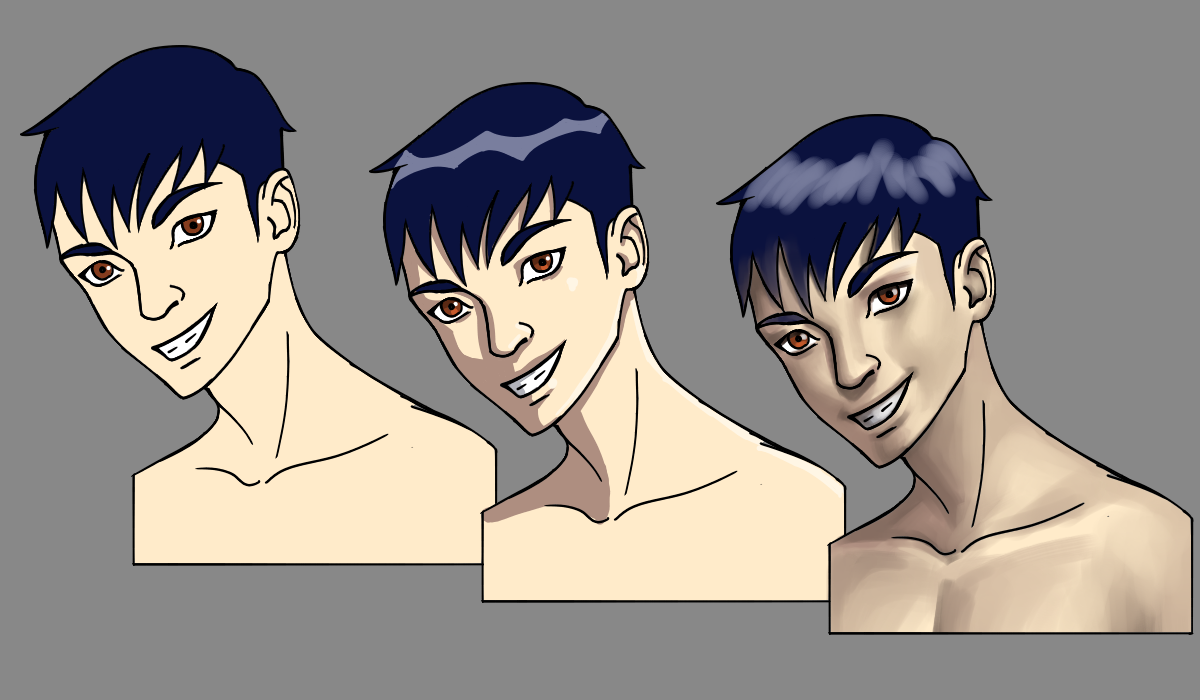 Using cel shading to color your images is faster than using gradient shading and gives a sense of depth unlike flat shading.

Metallic objects are those that are made of, resemble, have properties or consist of metal.

Shape of the object

We must first understand the surface of the object before we attempt to paint it as the surface will influence the shape of the shadows and highlighted areas.

Below are drawings of three objects of different shapes.therefore their surfaces are different. 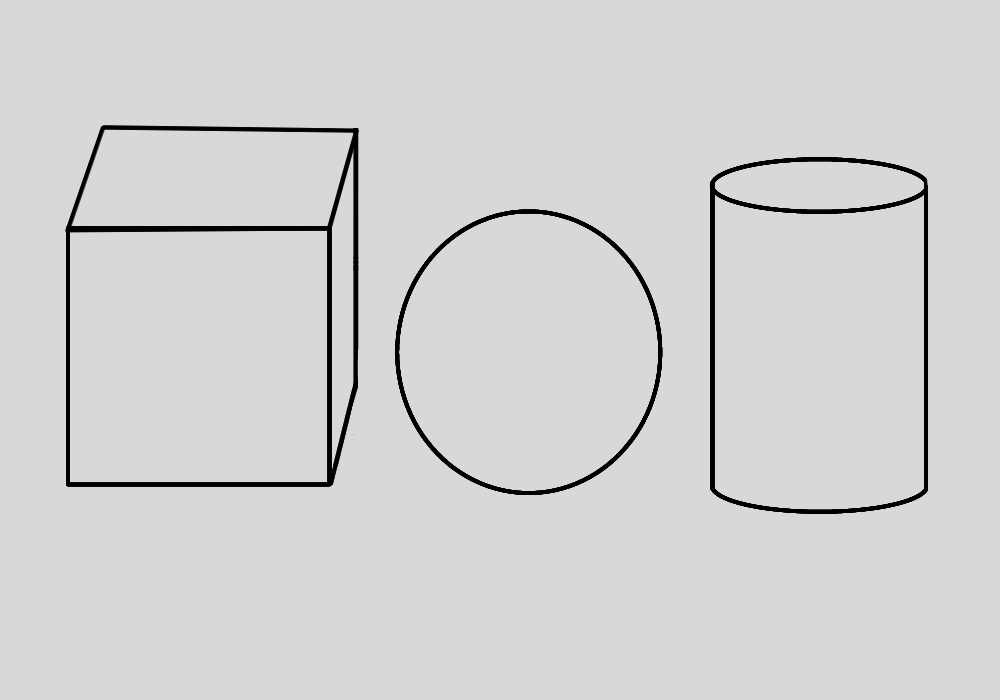 The first object is a cuboid, the second a sphere and the last one is a cylinder.

Below I have drawn lines to help understand the surface of each shape. 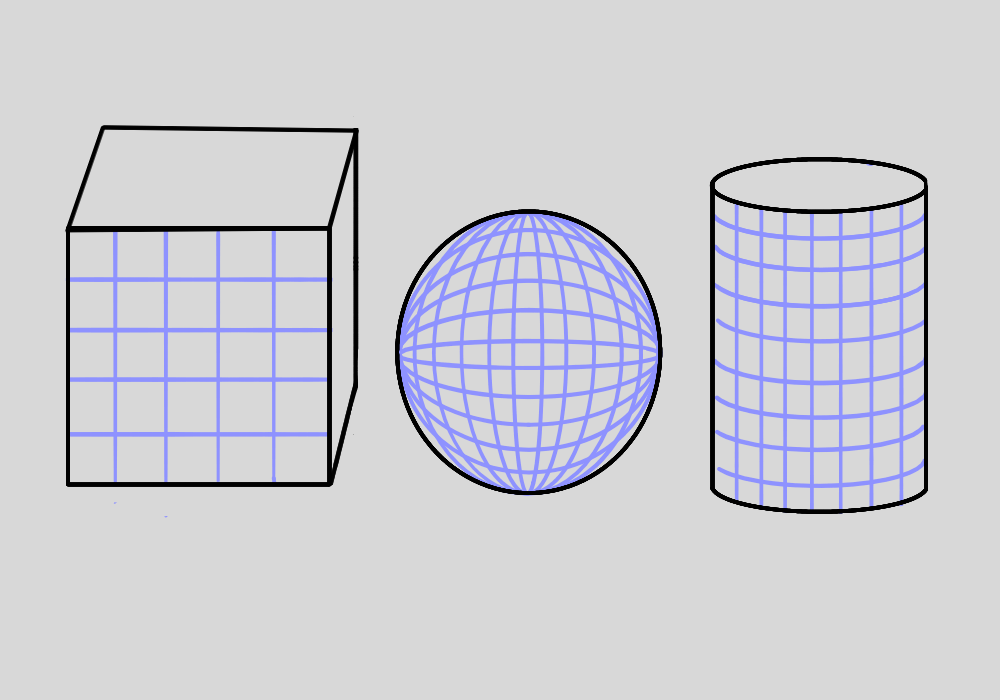 Below I have demonstrated how the surfaces of the different shapes would reflect light. 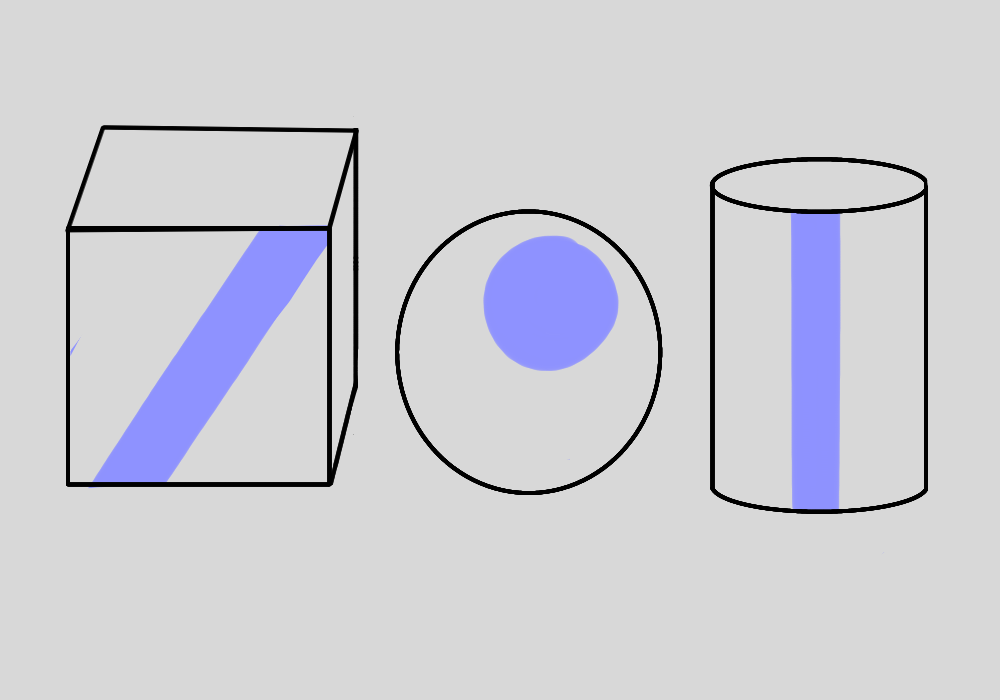 Because we are cel shading, we will only be using three versions of a colors to color our objects.

There will be base color or mid color which is the overall color of the object. Then the other two colors will be a lighter and a darker version of this base color.

Below I have colored the objects in the base color which will be one of our three colors. 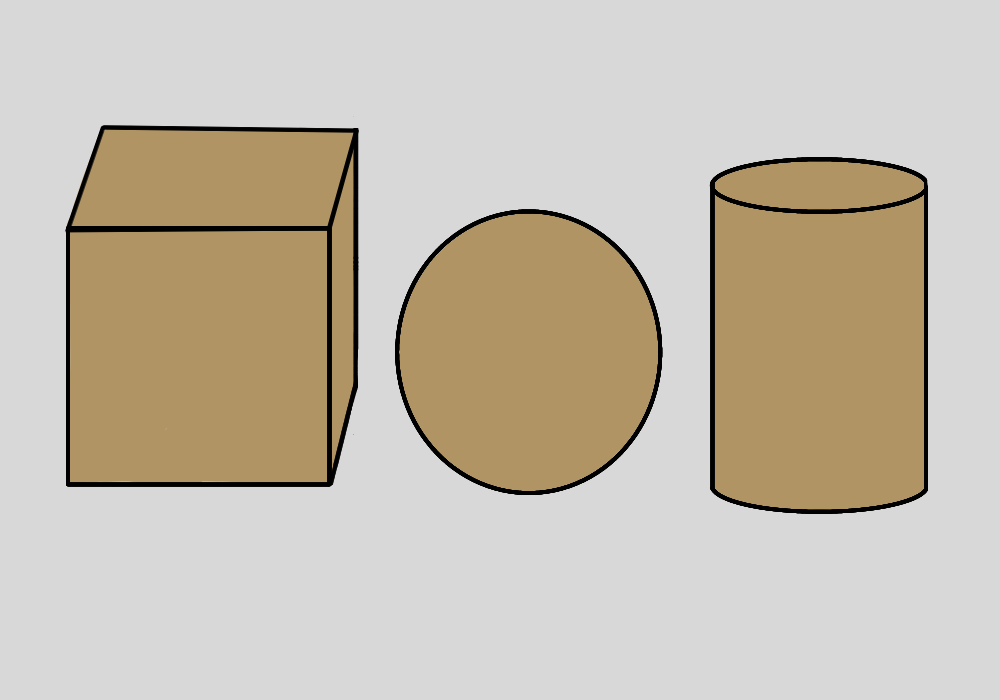 Below the object is really reflective hence the choice of colors. 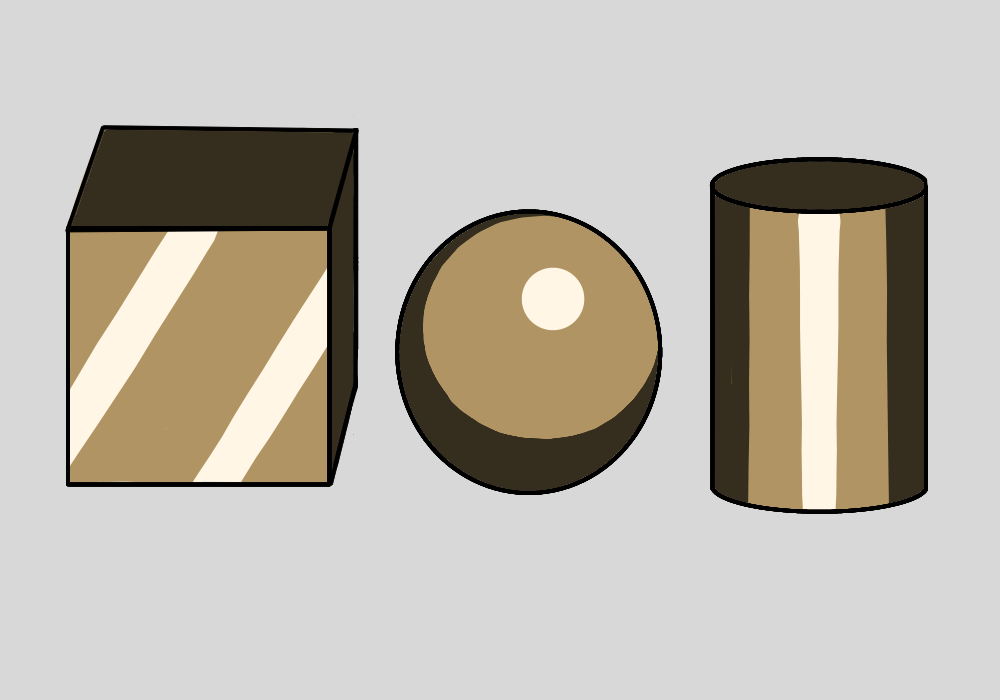 Below the object is not so reflective hence the choice of colors. 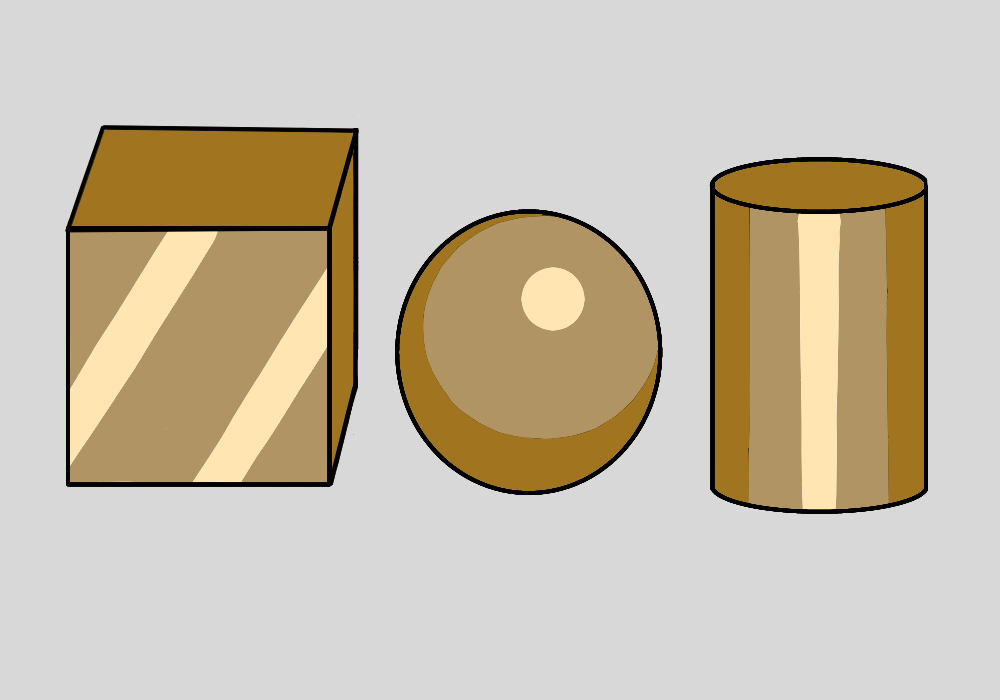 In other terms, the more reflective the object the more white is the lighter version of the color and the blacker is the darker version the base color.

The less reflective the object the more saturated the lighter and darker versions of the base color is, thus they are closer to the base color.

Additionally, there are few more tips to make your object look metallic when coloring via cel shading.

1-The darker color usually covers more areas than it would when coloring a normal object.

2-The lighter color doesn't cover much space than the base color.

3-Add rim lighting or make the line art the base color when it is in shadow areas.

4-Outline edges in the lighter color.

5-Add little streaks and dots with the lighter color.

I have drawn the line art of some objects below using the g-pen with no anti aliasing. 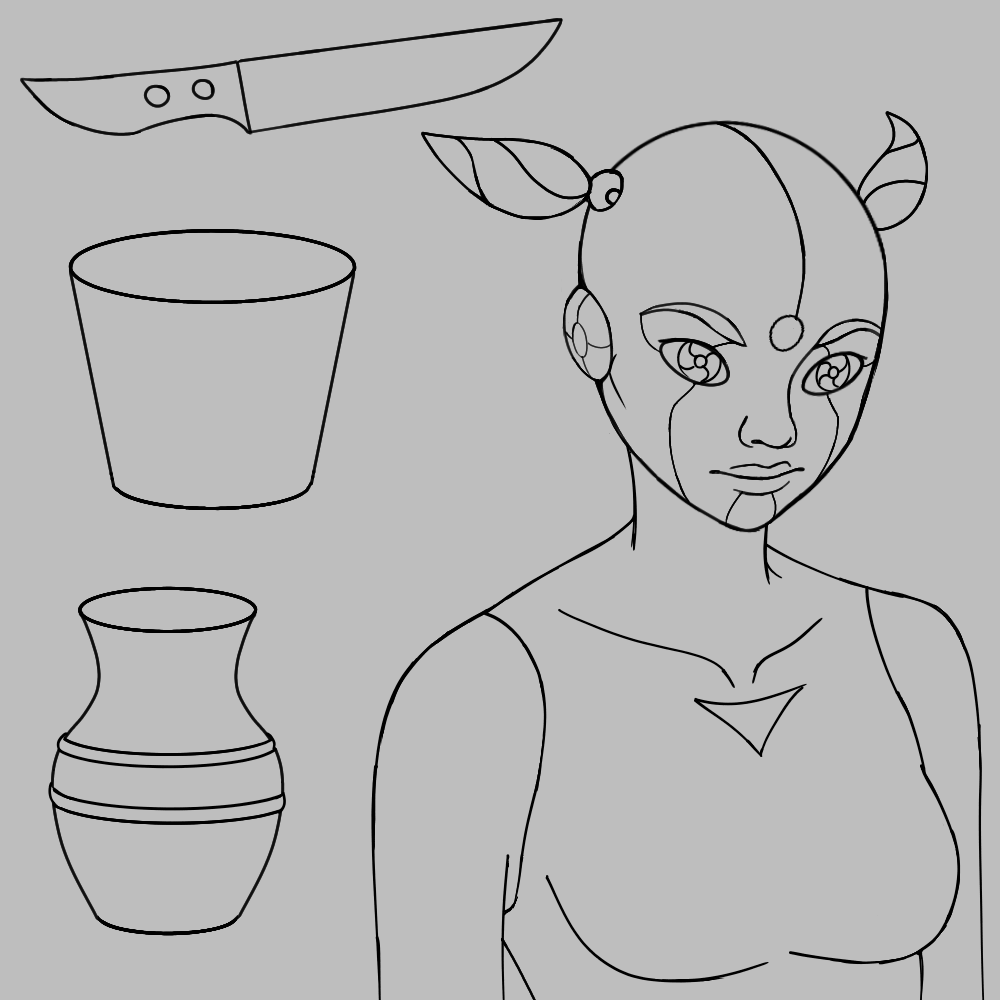 There are currently only two layers, one with the line art and the other with the background color which is grey as shown below. 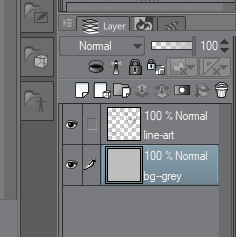 Now, I will flat shade the objects as if they were not made of metal, thus are not shiny, so we can use it in a comparison later.

To do this, I first set the layer with the line art on it to a reference layer. To do this I simply click the flash light looking icon shown below. 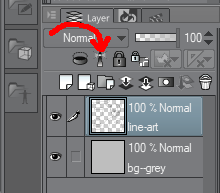 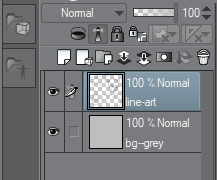 Then I add a new raster layer below the reference line art layer. We will be flat shading on this new layer. I named this layer 'flat-color'. 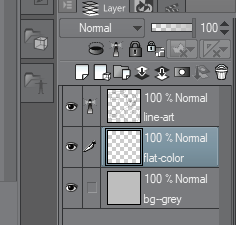 We will be using the fill option to add in the flat colors and we will use the 'refer to other layers' bucket tool. This will allow us to fill in areas on the currently selected layer, which is our 'flat-color layer, in reference to the line art that is on the layer set as 'reference layer' which is of course our line art layer.

If we use the 'refer only to editing layer' bucket tool it will fill areas that are enclosed on the current layer that is being edited only. And since our flat-color layer is currently blank it will fill everything as shown below. 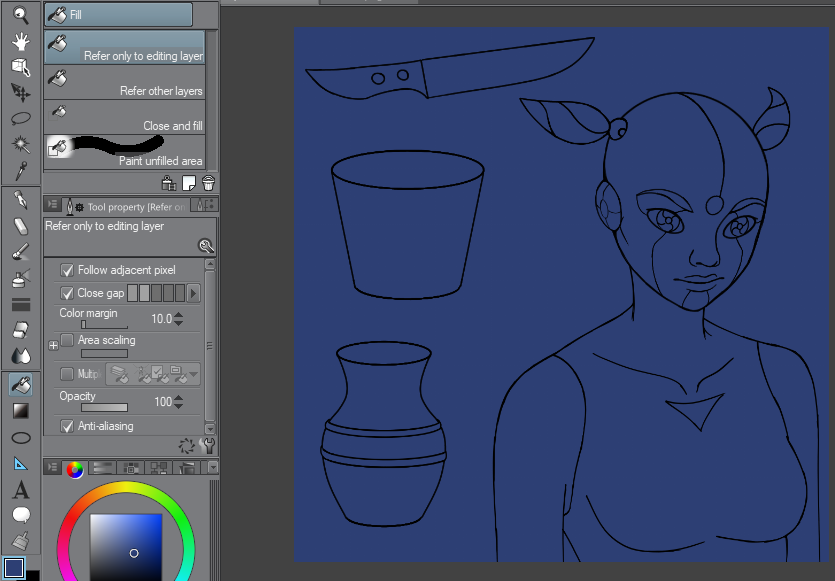 But when we use the 'refer other layers' bucket tool it will fill in areas on the layer that is being edited, which is our flat-color' layer, based on the enclosed areas on the reference layer, which is our 'line-art' layer. You can see the results below. 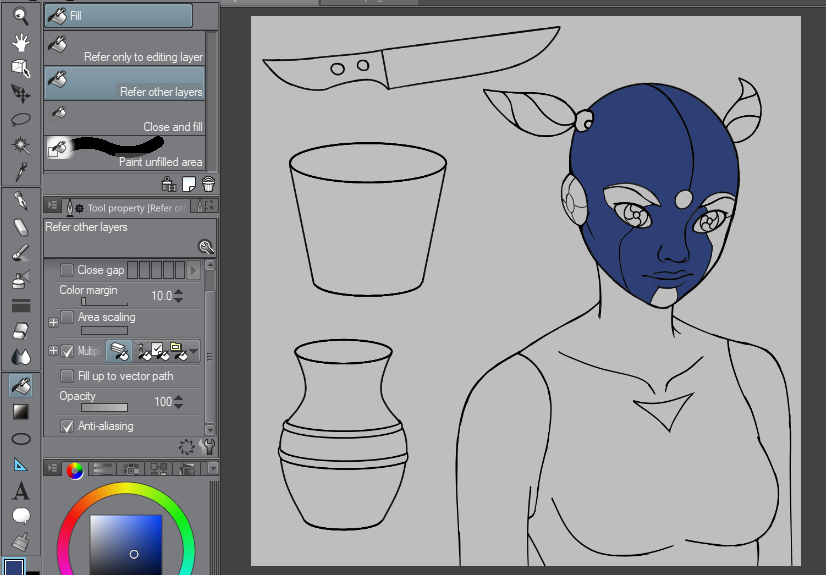 But if you look closer you will notice that there are some uncolored pixels thus leaving white spaces especially near the edges of the line art thus forming a white bordering between the flat color and the line art. Also some areas are just not colored as shown below. 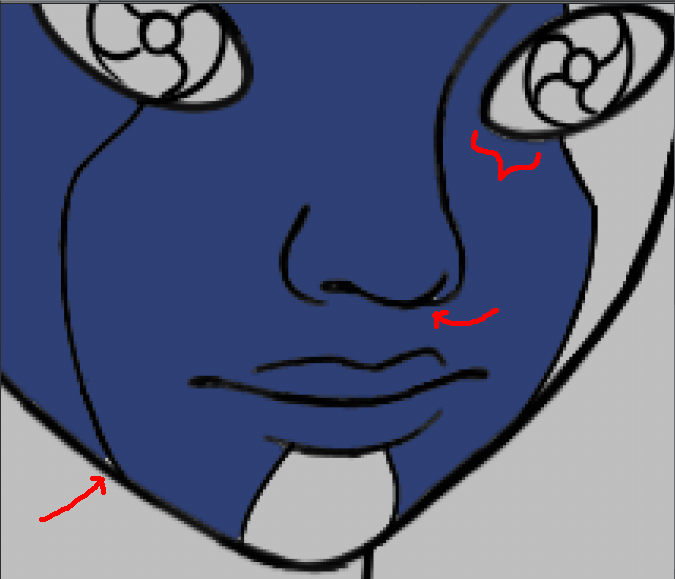 To correct this we must adjust the settings of the 'refer to layers' bucket tool which are shown in the tool properties which below the sub-tools which are the bucket tools.

Check the 'Area scaling' check box if it isn't already checked. This will make the fill color bigger or smaller, scaling it, by a specified amount. In our case we will be scaling it up so that it's edges will fall within the area cover by the line art above. I will set my scale to about two.

Also, make sure the 'multiple referencing check box is clicked and it's second option from the left, which is 'reference layer'. All this is shown below. 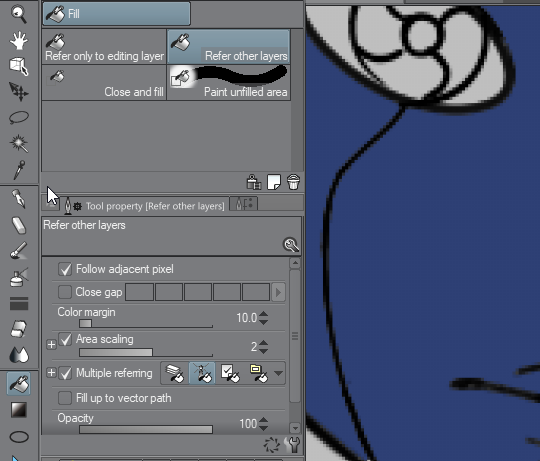 So I have cleared the flat-color layer of the fill that was done and redid with the adjusted bucket tool and you can see that the fill looks much better as shown below. 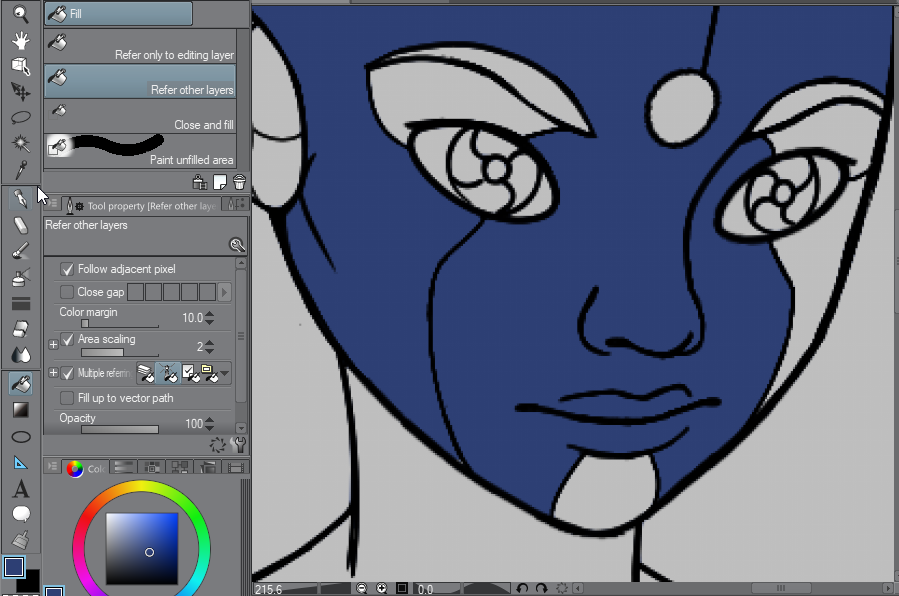 Another setting to adjust on the 'refer to layers' bucket tool is the 'close gap' option. This closes gaps in the pixels enclosing the area which would be the pixels of the line art above. I went ahead and clicked this and re applied the fill so you can see the difference below. 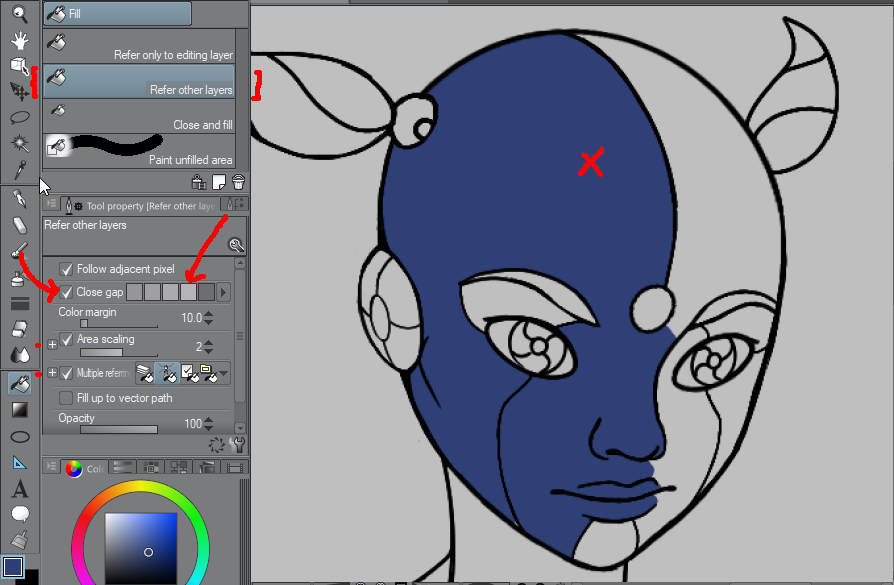 So all there is to do now is use the 'refer to layer' bucket tool to flat shade in the base colors on the 'flat-color' layer by clicking the enclosed areas.

If there are lots of enclosed areas beside each other that will be the same color, instead of clicking each of them, you can click on one then drag over the other areas and they will be filled with the selected color too.

You can see the results below. 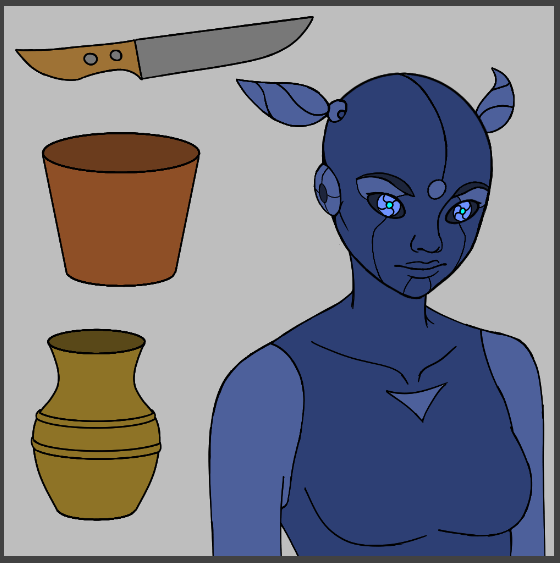 We will create a new layer for this called 'cel-color'.

I name this folder 'Cel-Color' as shown below. 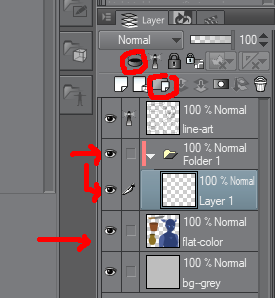 I have created a layer in the 'cel-color' folder and will name this layer 'cel-1'. On this layer I will cel-shade in the darker colors as if the objects aren't made of metal below. I used the g-pen for this.

Note, the handle of the knife is wooden not metallic. 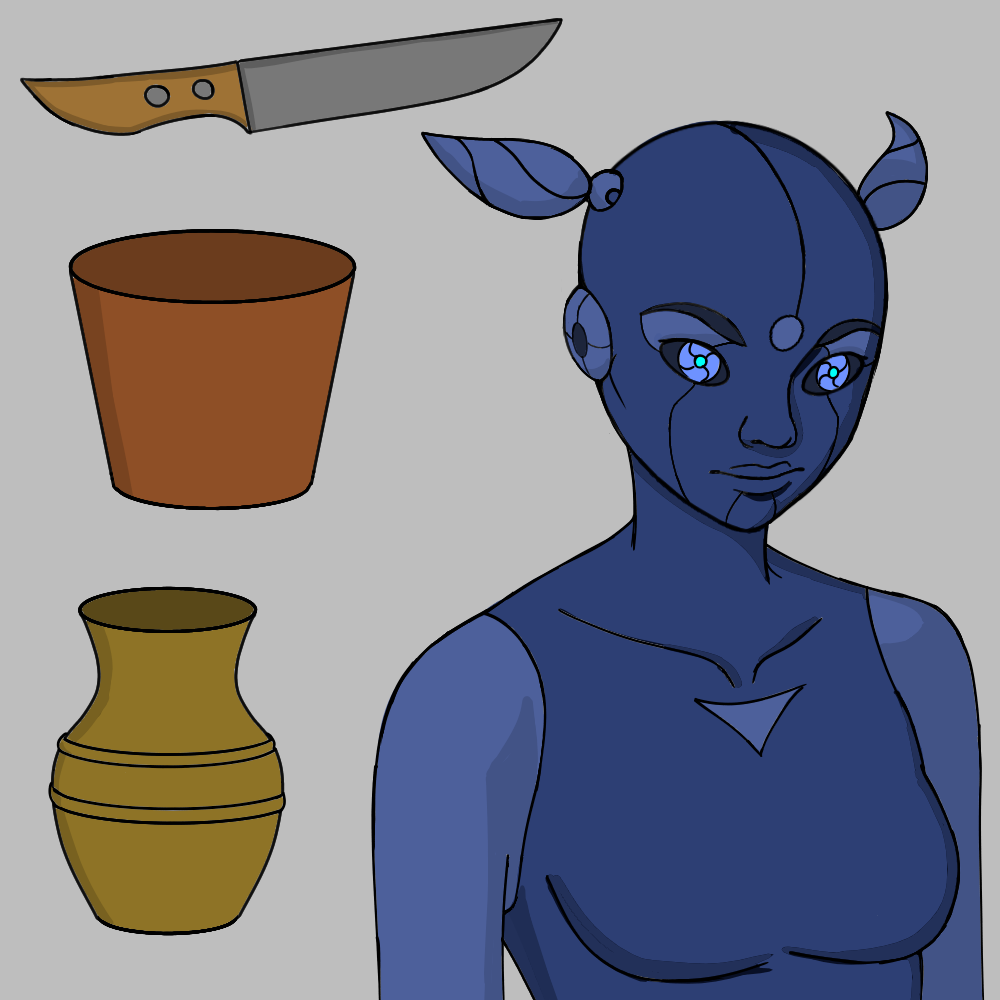 The image above gives a sense of depth and you can feel where the light source is coming from.

But they don' t look shiny as if they are made of metal.

Because I want them to be really shiny I will go ahead and darken the shadowed areas, that were added above, as mentioned in the previous 'Colors to use' section.

To change the darkness of the color on the 'cel-1' layer I simply go to edit>Tonal Correction>Brightness/Contrast and drag the brightness slider to the left until you are satisfied with the darkness. 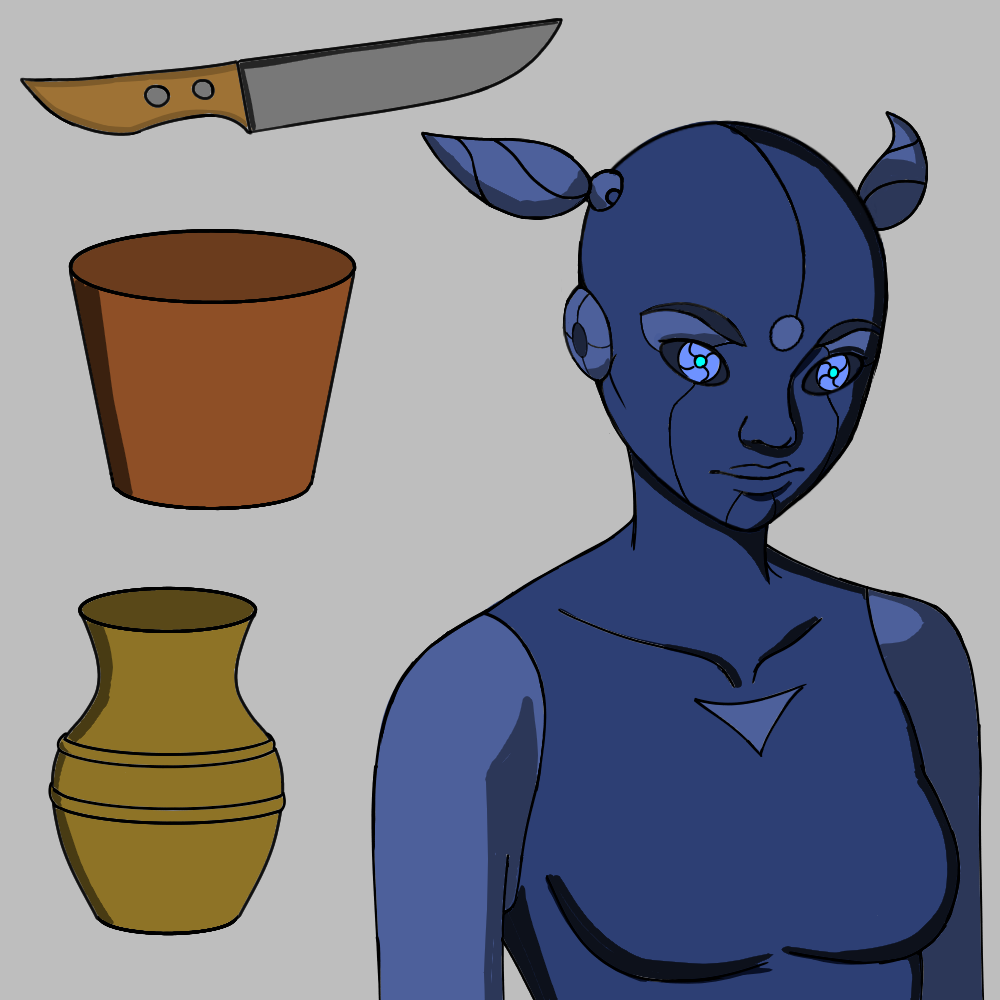 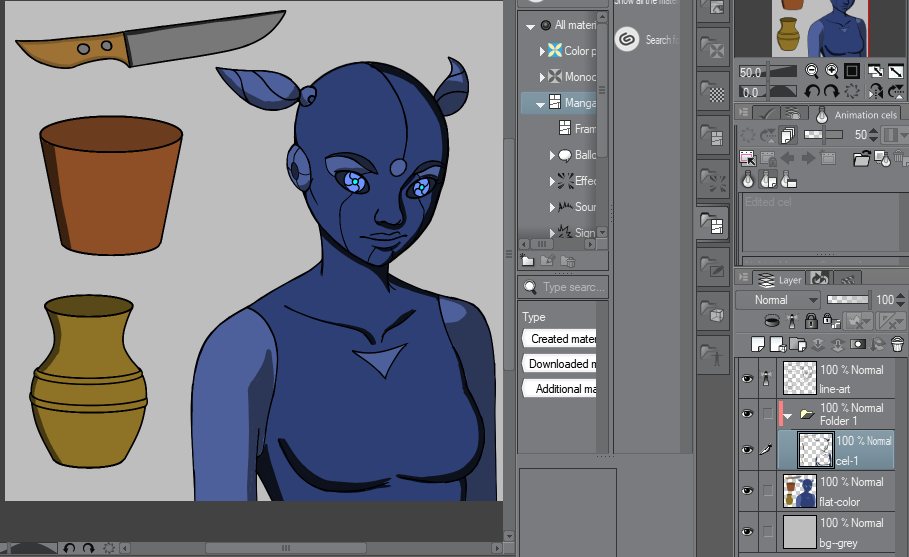 Now I will paint in the light area with a lighter version of the base color on a new layer in the 'cel-color' folder that I named 'cel-2'. This new layer is above 'cel-1' in the folder. 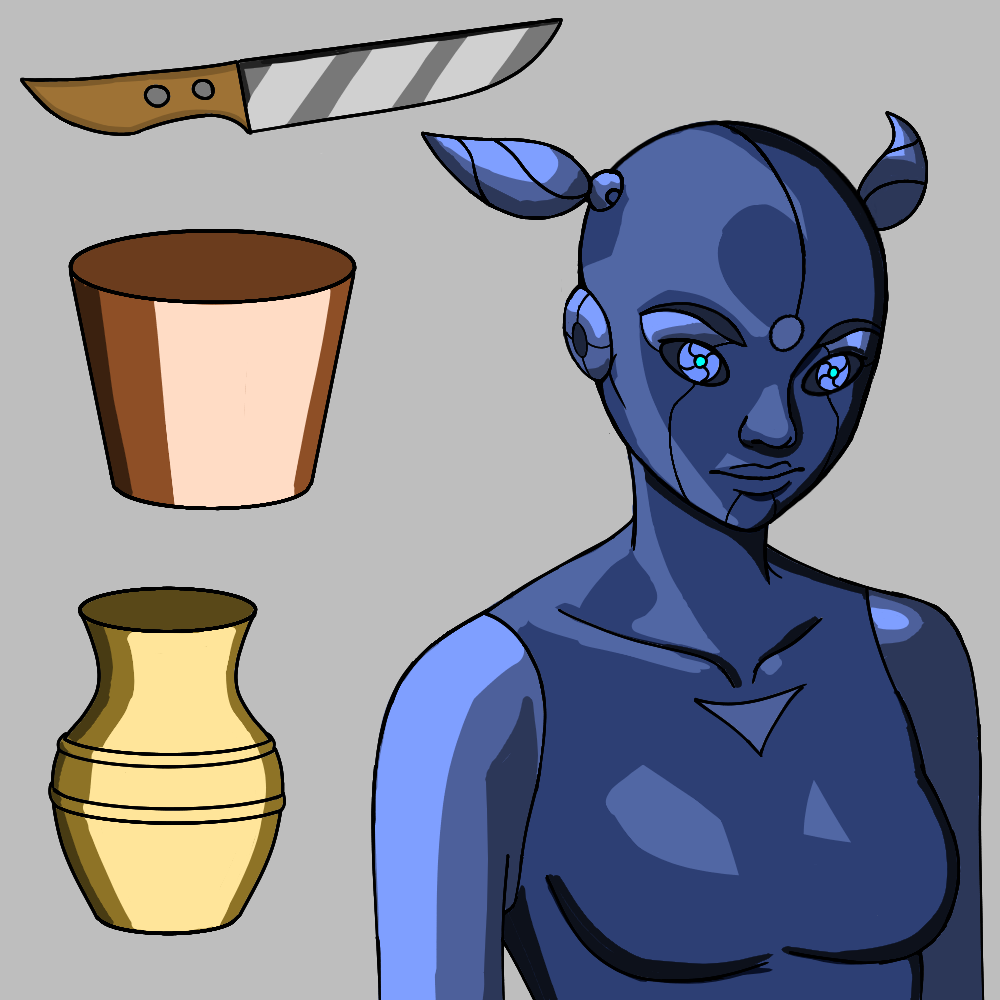 Notice how the form ( shape it forms) of the darker and lighter colors help to define the shape of the object.

But our images look a bit odd still. Let us apply the five additional tips mentioned in ' More tips' previously.

As mentioned in the first tip we must make the darker color cover more space.

Now for the second tip which is to not make the lighter color take up too much space. 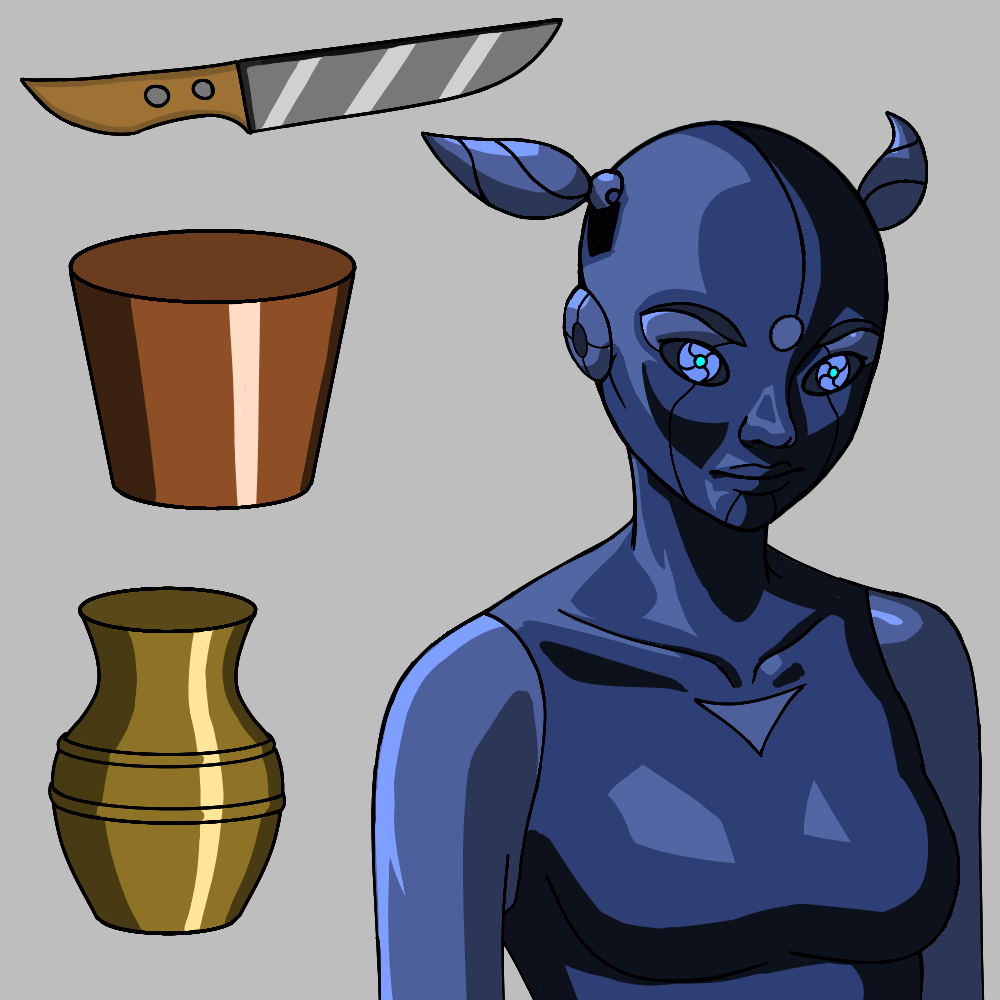 Next is to add rim-lighting in shaded areas as mentioned in the third step.

Since are using only using limited colors we will use the base color for the rim lighting. 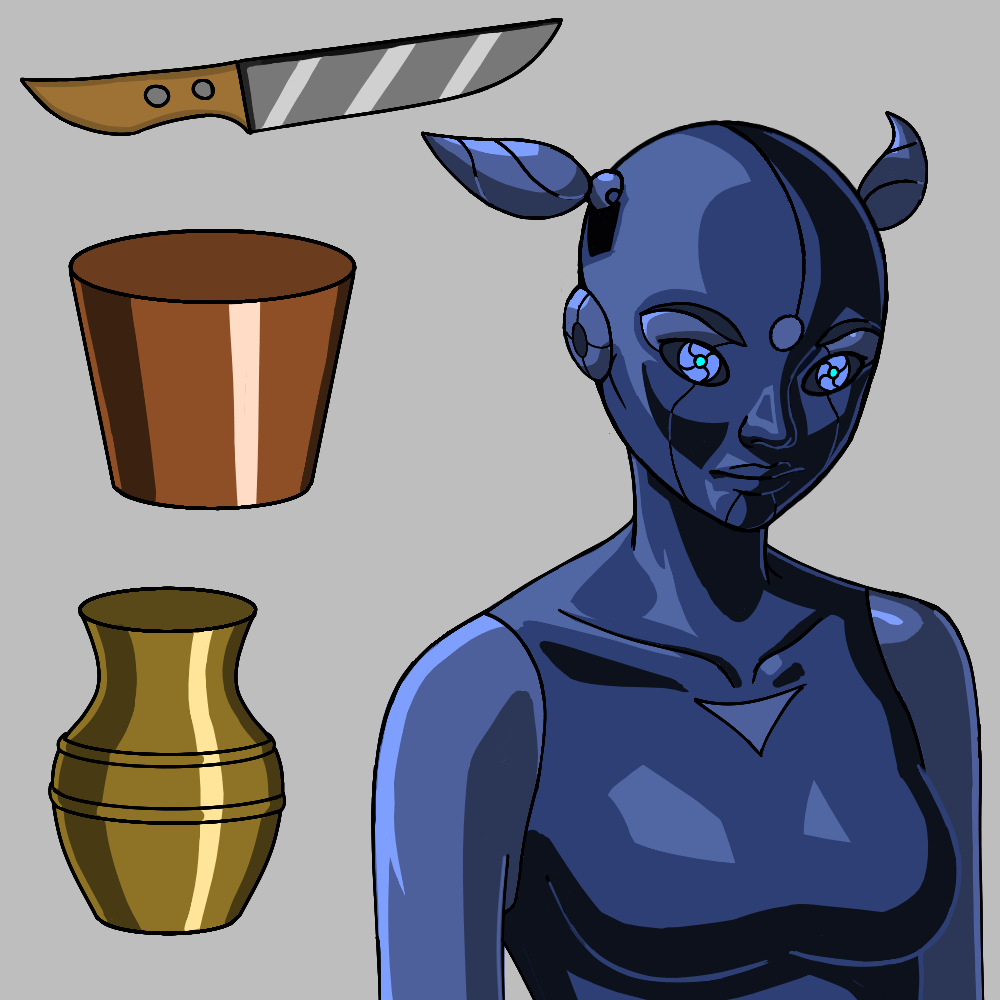 To color just the line opaque areas on a layer, you click the layer, then turn on 'Lock transparent pixels' by clicking the icon which is above the layers.

So I duplicate the 'line-art' layer and for the copy that is above the other, I remove the referencing, thus unclicked the flashlight icon.

I turned off the opacity of the copy of the 'line-art' layer with the referencing on but it doesn't matter because it is covered by the top copy anyways. 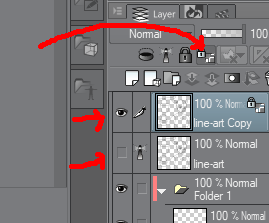 Now to emphasize the edges of the object that are not in the shadowed areas.

These were colored in the base color so we will use the lighter color for this. 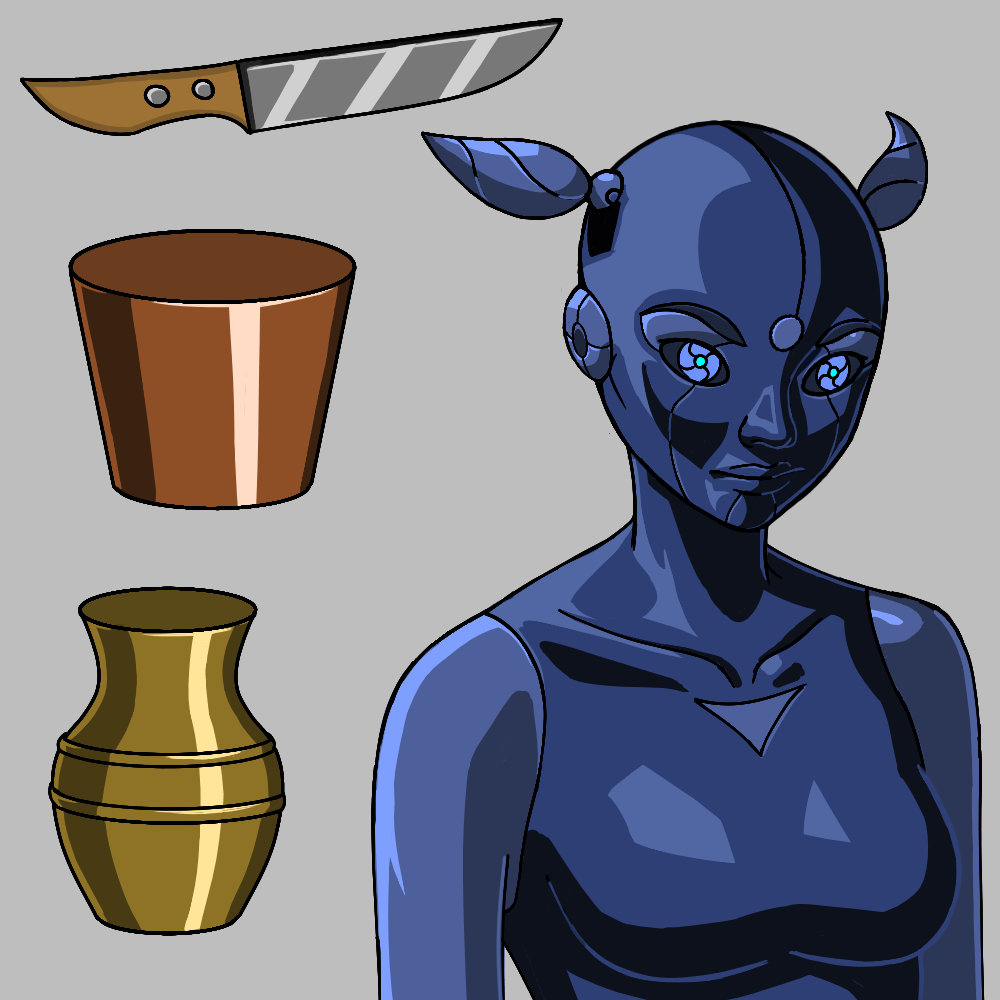 And finally, as mentioned in the last tip, is to ad little dots and streaks using the lighter color. But be moderate. 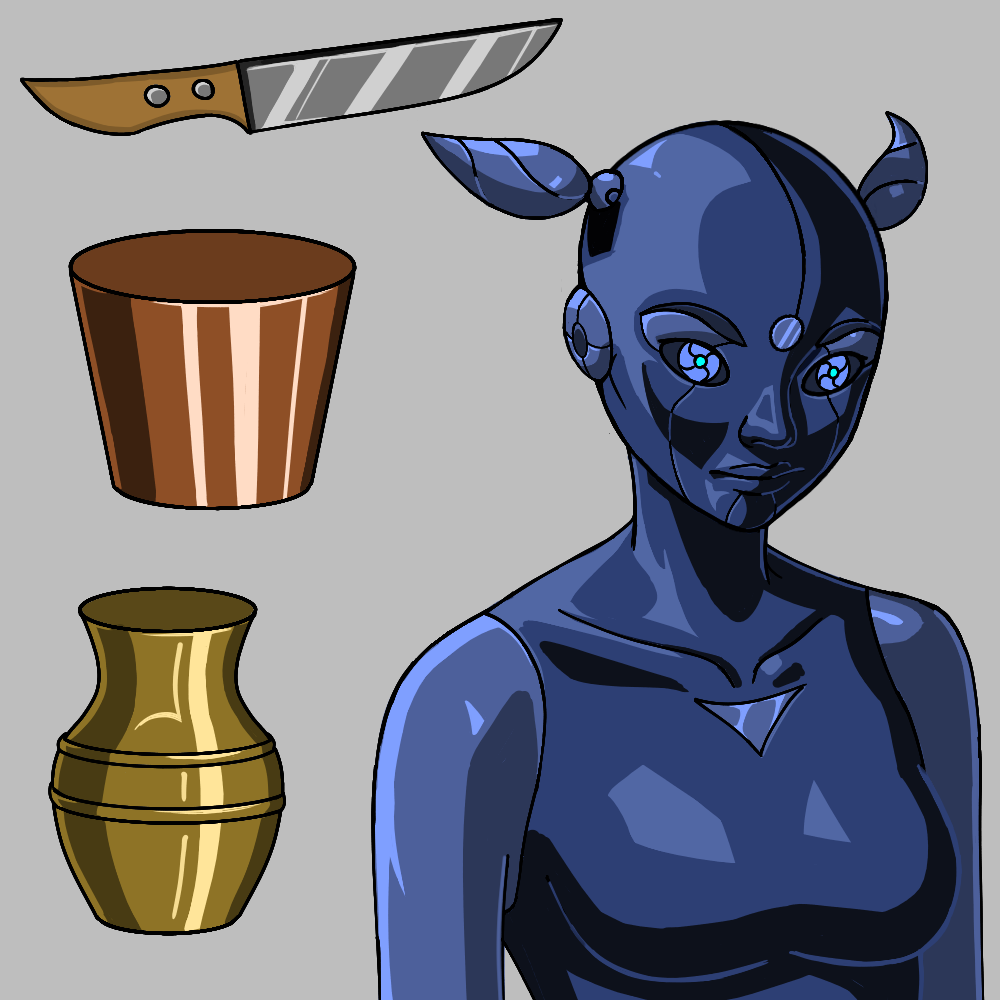 I recommend using a hard brush when painting and you can use the bucket and lasso tool to quickly paint areas.

This is the end of my tutorial and I hope somebody found this useful.