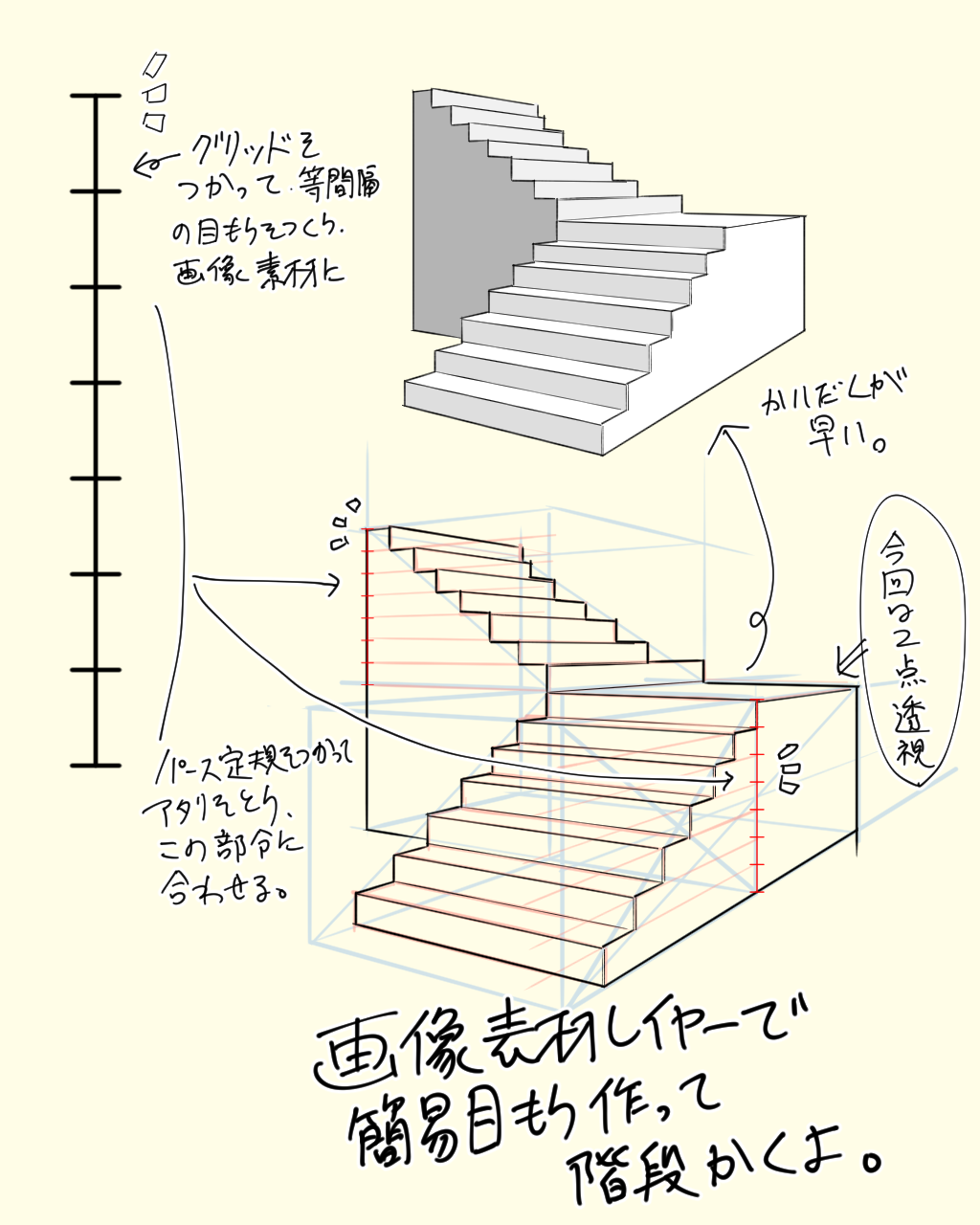 You can easily draw the stairs with the simple scale made into image material and the perspective ruler, and draw the space around the stairs. 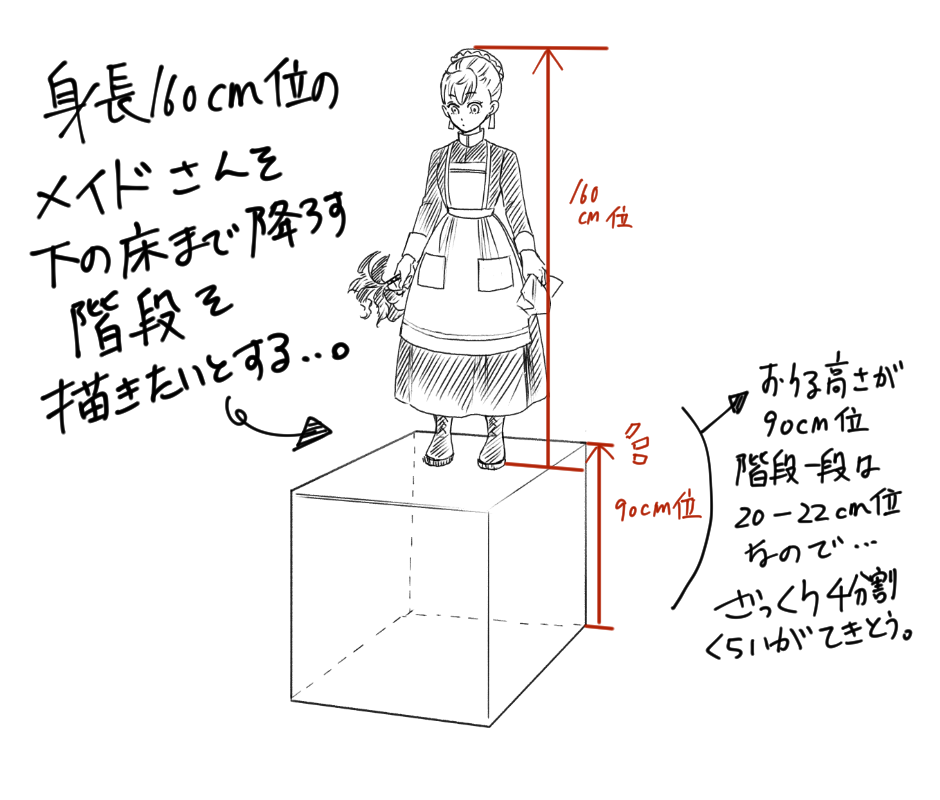 First practice.
A girl about 160 cm tall draws stairs to get off from where she is currently standing.

The step you want to go down by eye is 90 cm mail. The height of one staircase in a typical Japanese house is 20-22 cm, so it seems that four steps are just right.

* Normally, if it is a staircase of about 4 steps, it seems that it is quick to draw by dividing it using diagonal lines, but here we will start with a simple drawing for convenience.

① Make a simple scale for writing stairs. Display the grid on a new layer, snap to the grid and draw a straight line divided into four. As long as they are evenly spaced, the scale size is appropriate. Convert the drawn scale to layer → Materialize with image material layer.
You can freely change the size of the materialized scale and place it at any position on the screen. 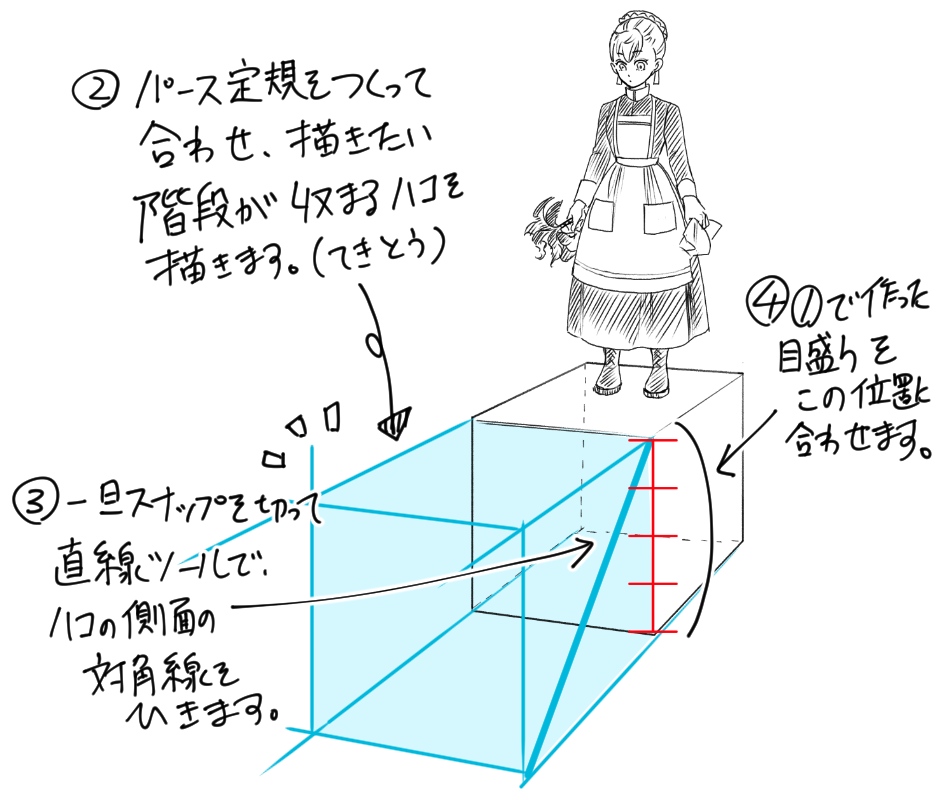 ② Make a perspective ruler according to the screen where you want to draw the stairs. This time it is a two-point perspective.
From the place where the person who wants to go down the stairs is standing, draw a box that fits the roughly drawn stairs. It's okay to measure it roughly.

③ Cut the snap of the perspective ruler once, and draw a diagonal line on the side of the drawn box with the straight line tool.

④ Match the size of the scale made in ① and align it with the position shown in the figure. (The layer color has been changed to red for clarity) 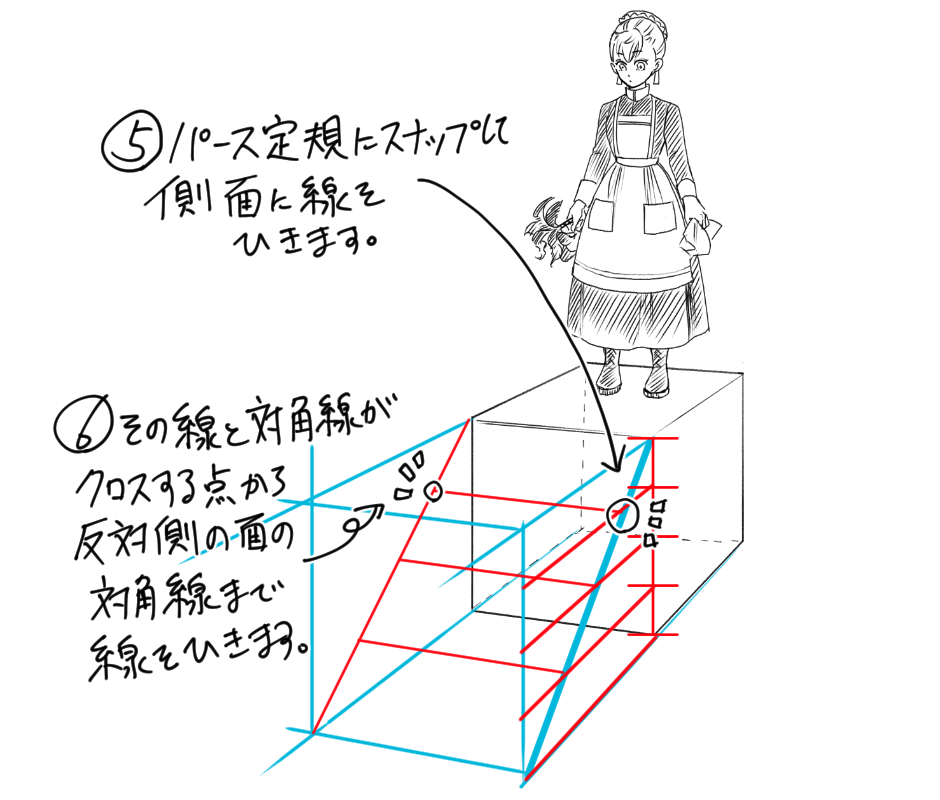 ⑤ Snap to the perspective ruler again. Draw a line on the side of the box using the scale as a guide. 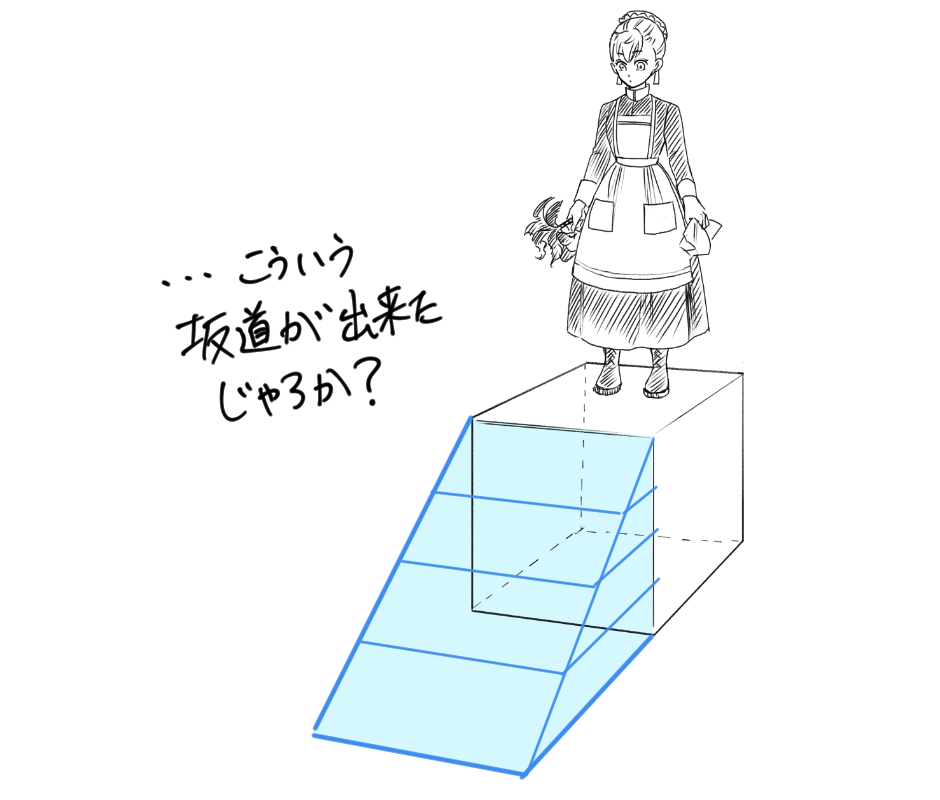 Arrange the lines once.
It's kind of complicated to explain in words, but if you can make a slope with such contour lines, you'll be successful so far. 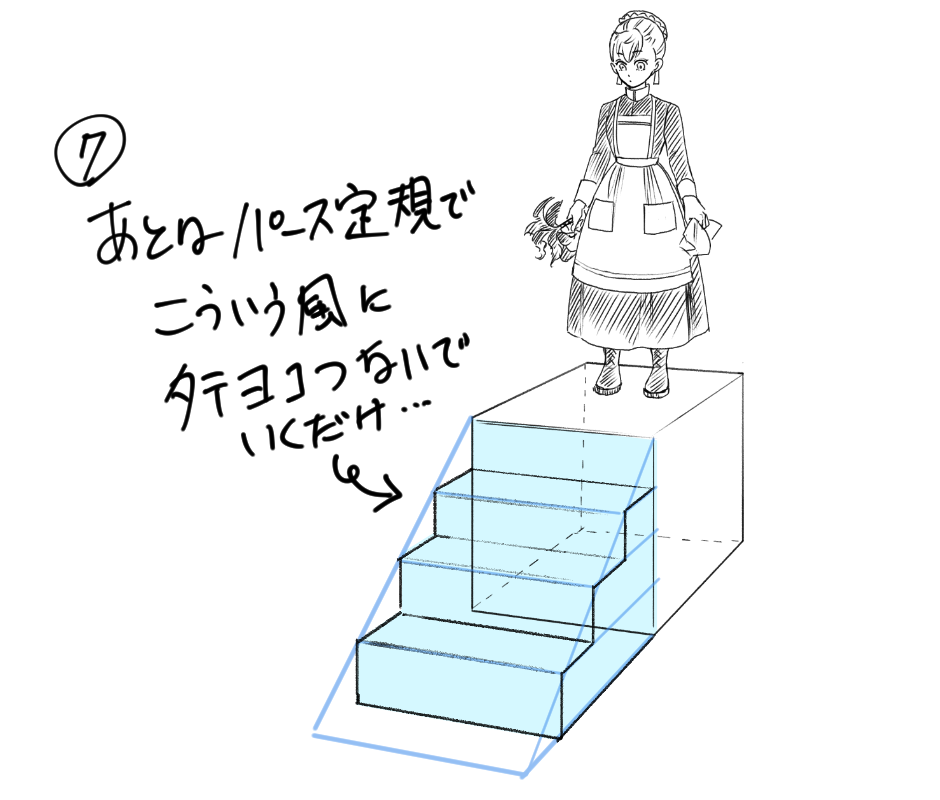 ⑦ After that, draw a crunchy step with a perspective ruler, referring to the slope line. This stage is quick if you use a vector layer and an eraser up to the intersection. 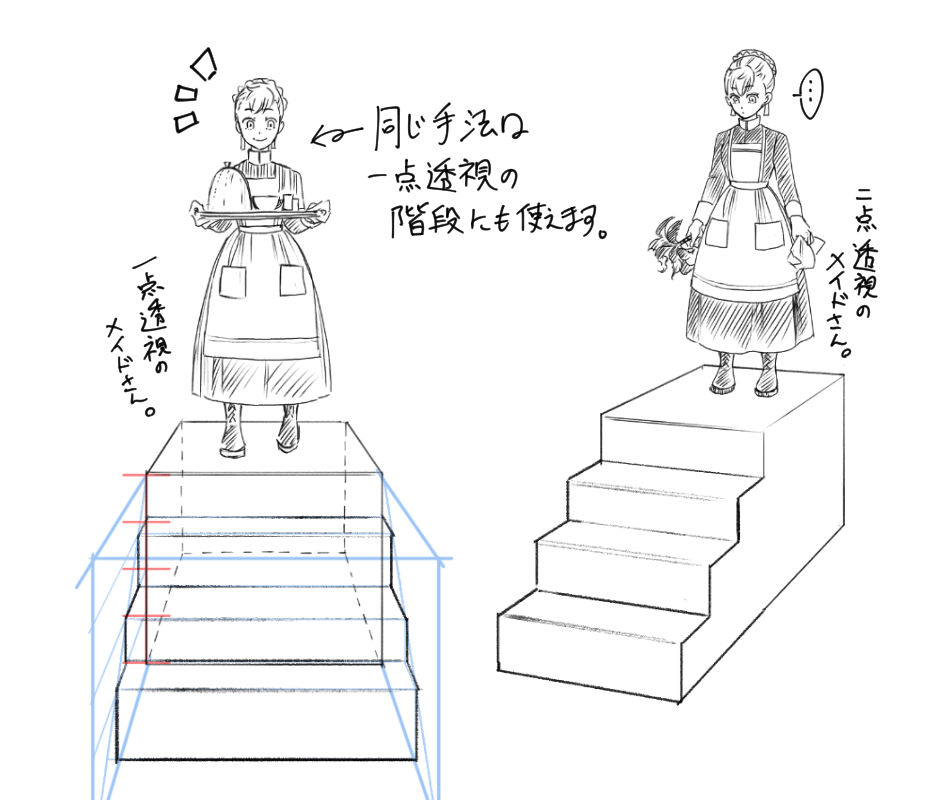 If you erase the extra lines, you will have a natural staircase. You can also draw a one-point perspective staircase using the same method.

Once you get used to the sequence of steps, it will be very easy to draw stairs of any number of steps. I drew four stairs here for the time being, but if you make a scale and finish it, you can draw as many stairs as you like, so it is a little troublesome to divide and calculate, large stairs and stairs that change direction in the middle It can also be applied to. 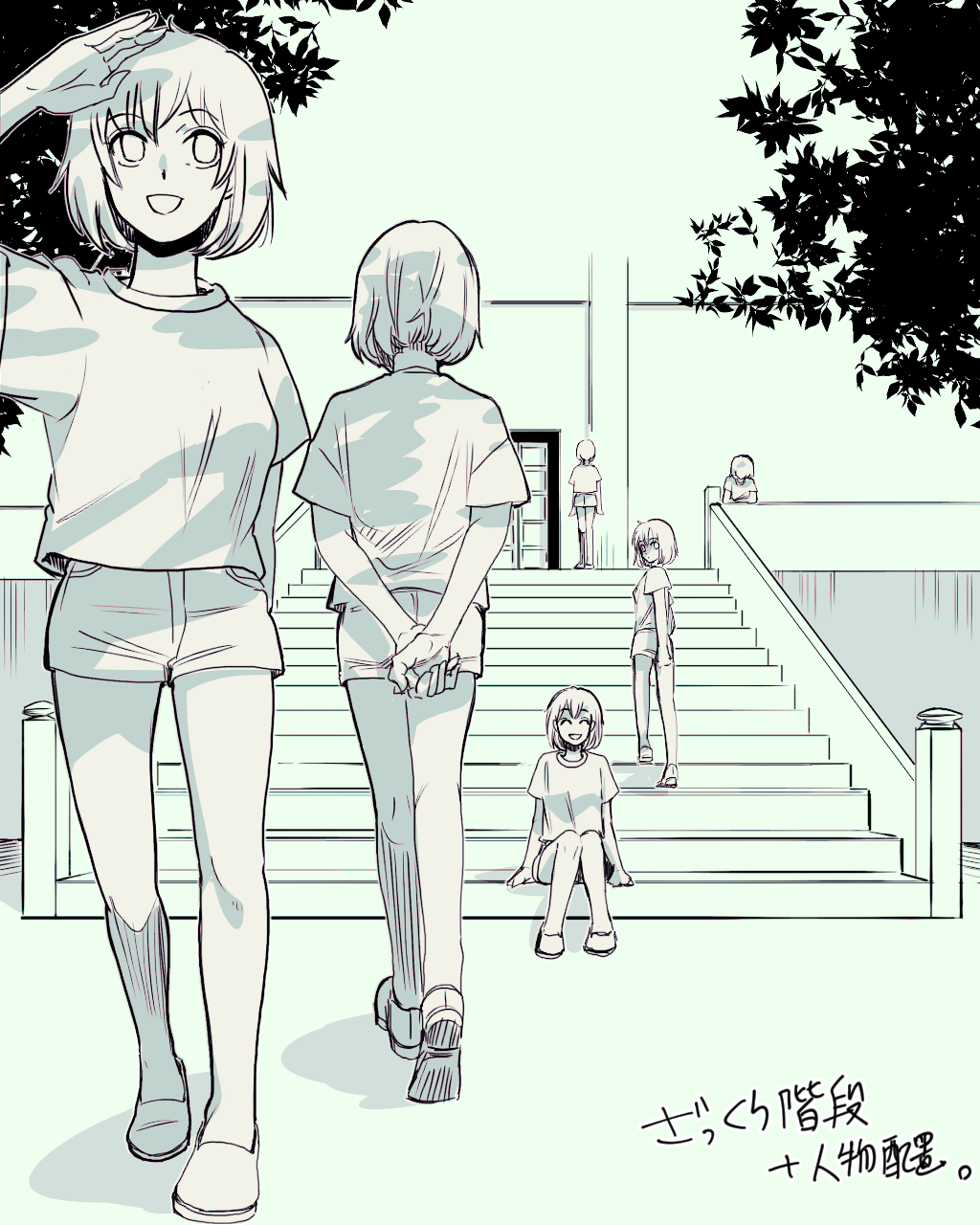 You can draw almost freely on the stairs in the space of one-point perspective and two-point perspective. This method is suitable for intuitively drawing the necessary stairs from a person, so try changing the number of steps, arranging a person of life height in the space, and practicing. 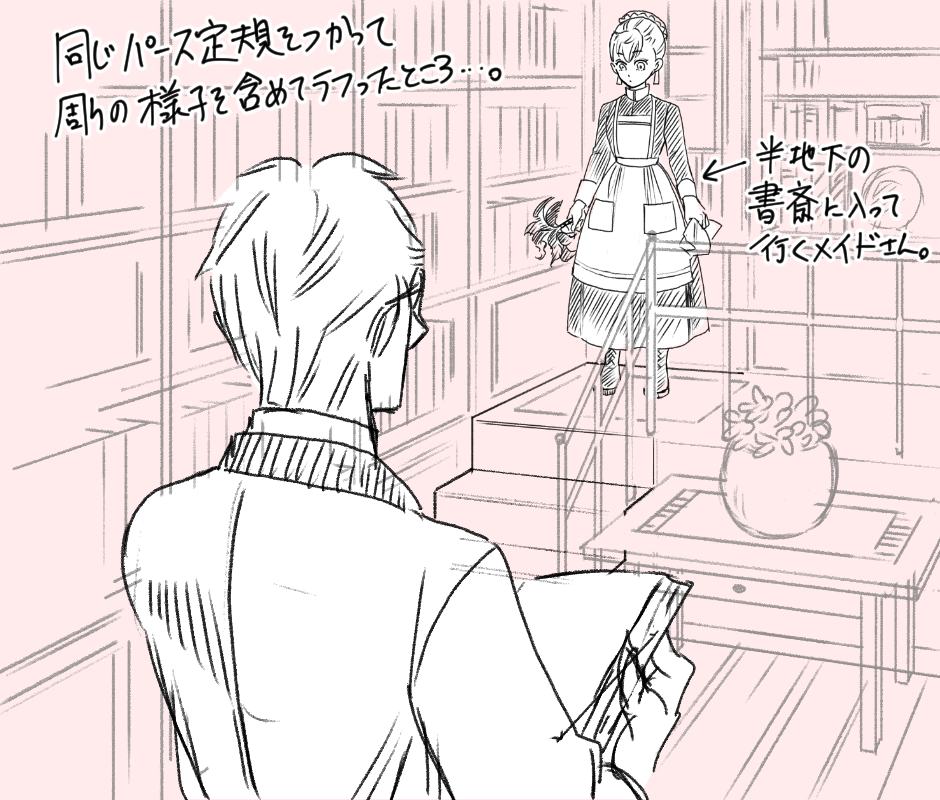 From the maid who was about to go down the stairs, I used the same perspective ruler to draw a rough sketch including the surrounding space. Once you get a feel for the space, you will be able to draw as crunchy as this.

In the advanced version, let's consider a slightly complicated space. 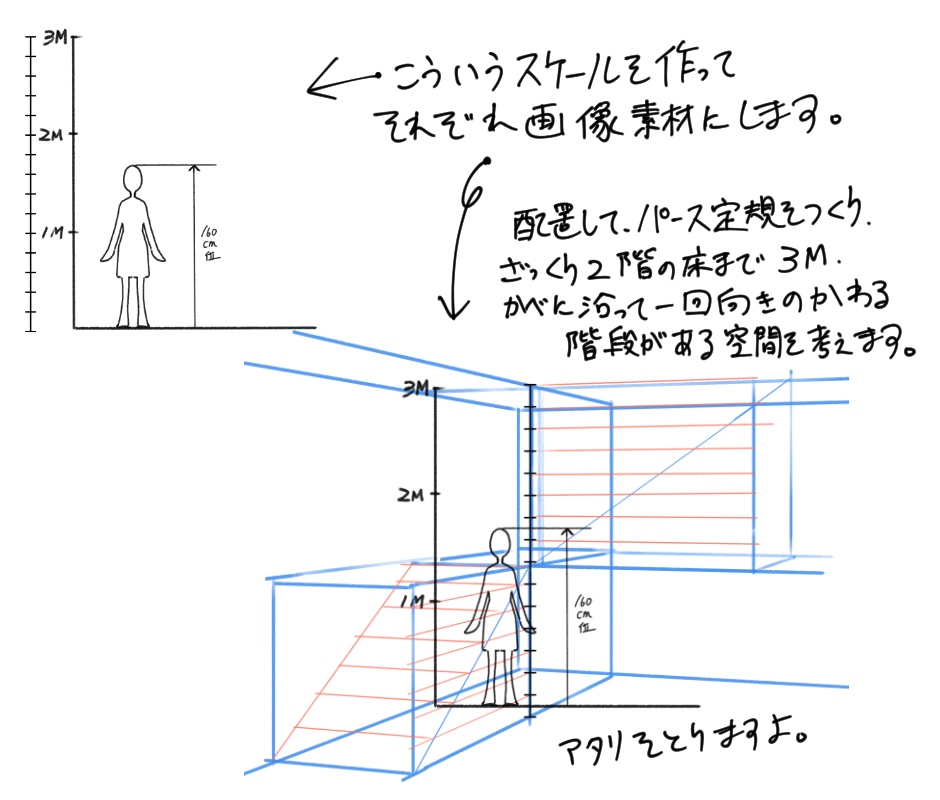 Let's set the height of the person in the space to be 160 cm and the floor to the second floor about 3 meters. Assuming that one step of the stairs is 20 cm, it takes 15 steps to climb to the second floor, so make a scale divided into 15 and use it as an image material.

Place it on the screen, make a perspective ruler, and take a hit. Along the wall of the room, it is a space with stairs that turn once at the landing. 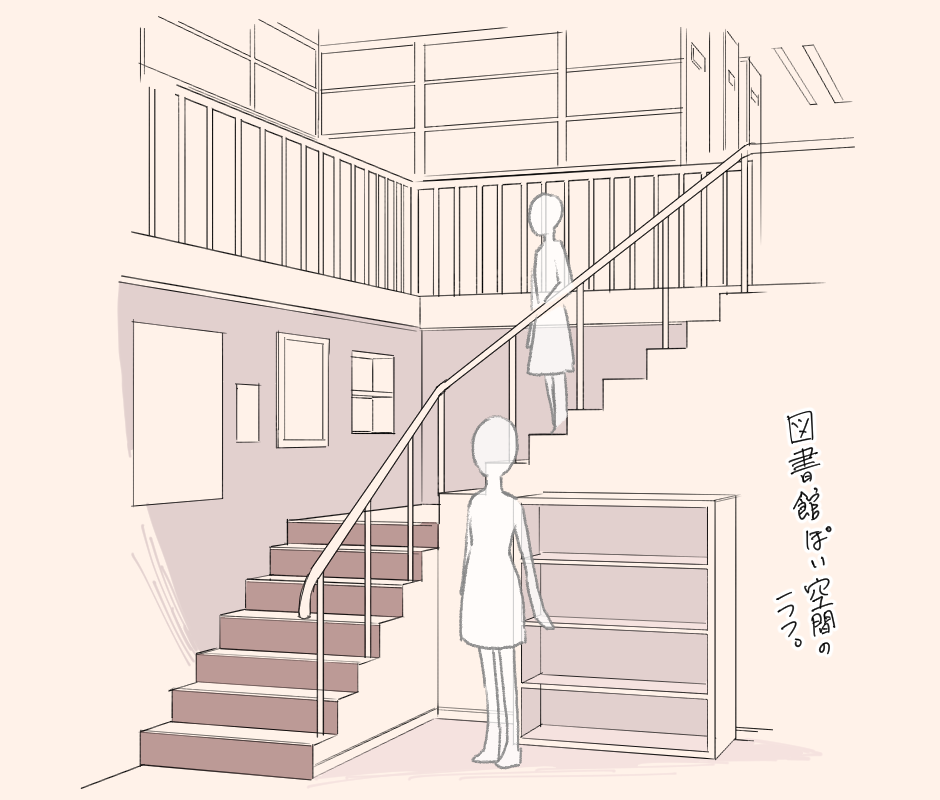 It is a rough sketch of a corner of the library, drawn with a perspective ruler while referring to Atari.

After making the scale, if you get used to it, it will be less than an hour to this extent.

When I could draw a suitable staircase for a person, I said "I was able to do it! ], And I think it will be much more fun to draw the background. Let's do our best!

↑ Please refer to here for how to set an appropriate perspective ruler from a person.